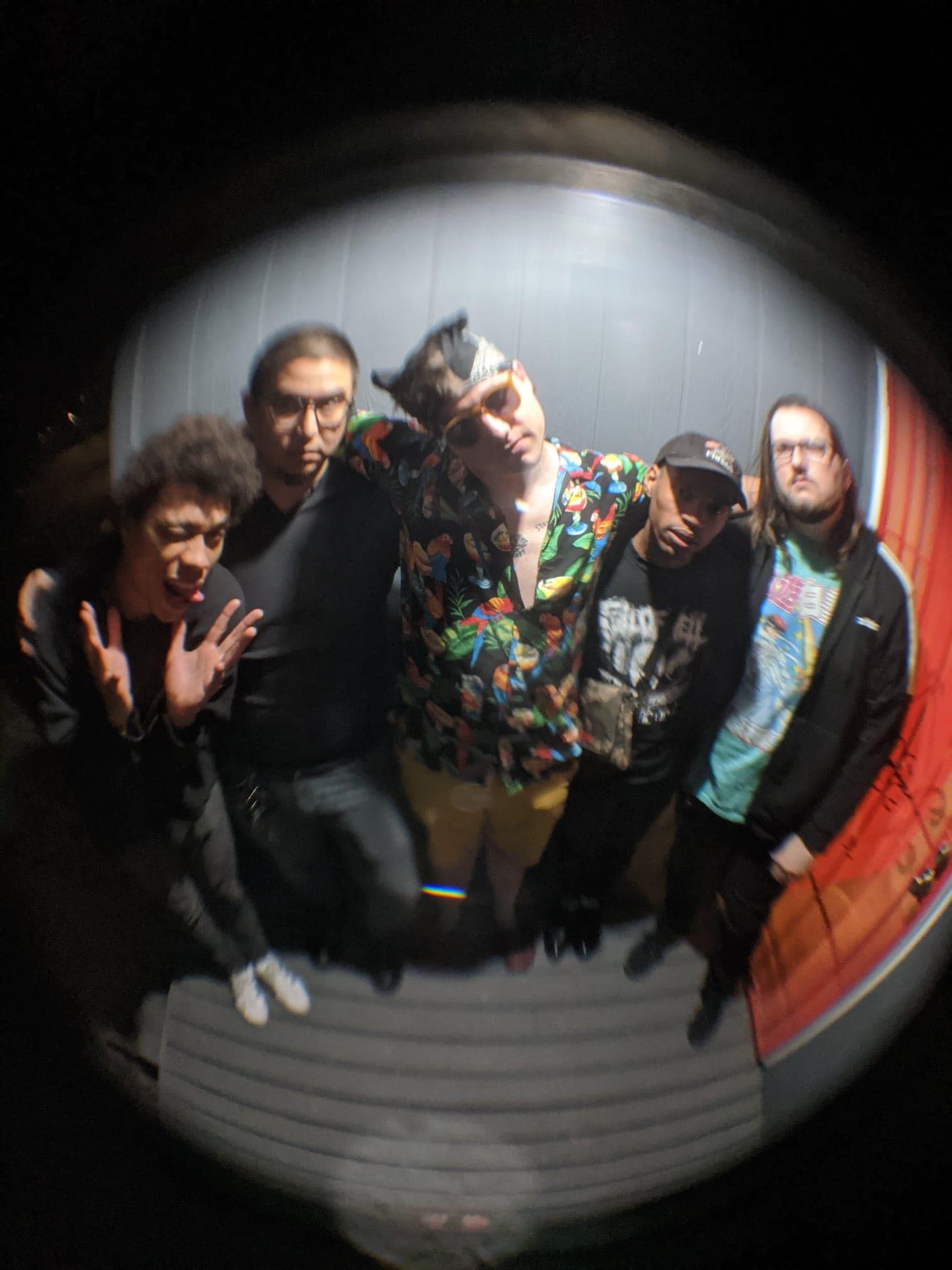 My favorite new record of the season is Oracle by Vampiros Del Espacio.

Dark yet groovy, full of both ambiance and ambient sounds, Oracle instantly captured me with it’s ethereal effervescence. Blues riffs and sitar ragas converge into what sounds something like the extension of the Only Lovers Left Alive soundtrack. Think Uncle Acid meeting Mr. Bungle. When I discovered that Spicy Mayo saxophonist Austin Rickert was playing with this new group, I instantly followed them on social media to find out when I could hear some music. And I was not disappointed.

Oracle starts slow and deliberate with “Blood Moon”, a track that I feel symbolizes the feel of the album well. If “Obsolete” serves as the fuse, “My Lovely Day With Satan” is the explosion that shoots the album to outer space. “Oracle” sets a meditative mood while “Dreamy Shadows” interjects a great balance of lofi dreampop in the overall sound of Vampiros Del Espacio.

“Do the Vampire”, along with “Satanic Panic”, are a cheeky nod to swinging rocknroll, while “Zapruder Film” and “Arf Arf” could not be more different in their sonic approach. The album closes with “Ahh a Red One”, a 9-minute joyride through the twisting alleys and lanes of Vampiros Del Espacio’s stellar sound.

Now, we at YabYum have covered a lot of Austin Rickert’s projects over the years. However, I would be remiss if I did not include him as part of my Saxophone Story articles that I’ve been posting this year and so I had to ask him some questions about Vampiros Del Espacio and Spicy Mayo, how he’s been during quarantine, what’s upcoming, and of course playing the saxophone. Check out Oracle and read the full interview below.

Mark Anderson: What type of saxes do you play and who are the makers? How about the brand of ligature and your reeds? (I’m getting real nerdy here.)

Austin Rickert: My alto is a Big Bell Cannonball sax & it was built in Salt Lake City. It’s made from black nickel & I named it Lars because I became interested in Russian culture after visiting there with my family & also because I loved Lars Frederiksen who plays guitar in the band Rancid. I bought it when I was 16 & I’ve been playing it ever since. My favorite thing about my alto is how svelte & slender the body is. The sound is refreshingly bright & cuts like a knife.

My tenor is a Jupiter & it was made in China. I got it in college & I named it Fela in honor of Fela Kuti, the Nigerian saxophonist & activist. Every single time I play saxophone I think about Fela Kuti. He’s the most phenomenal saxophonist I’ve ever heard. I’ve played this tenor with almost every band that I’ve ever performed with. It has a warm, wet & sultry sound that I am obsessed with.

My soprano is a Palatino & it was also built in China. A few years ago my sister gave it to me for Christmas & I cried. Soprano is such a haunting & mysterious instrument to me. It’s the most physically demanding instrument that I know how to play.

I love playing number 4 Van Doren reeds because I enjoy their sharp attack, rich timbre & because they last longer than other reeds.

There are so many new young saxophonists that I love! Jim Conti, Mike Brown & Dan Ross from Streetlight Manifesto made a tremendous impact on me. Leo Pellegrino from Too Many Zooz is madly innovative & is my new spirit animal. Leland Whitty who works with Badbadnotgood is marvelous. Wenzl McGowen & Michael Wilbur from Moon Hooch are both equally wonderful & I was lucky enough to see them at a small venue in downtown last year & they played for 2 hours & it was one of the greatest shows I’ve ever seen in my life. Also I’ve always been fond of Chris Hoskins from Captain Squeegee & The Soap Suds since I saw them when I was a freshman in high school at the first punk show that I ever went to.

How did you hook up with the cats (or perhaps bats, ha) in Vampiros Del Espacio? Or maybe you helped form the band? When was this and who else is in the band?

I’ve known James Hanna for years. My old bands Naked Pizza & Bacchus & Boss Frog used to play gigs with his old bands Freaks Of Nature & Thee Oakland Raiders & Casual Encounters. In late 2019 he posted online about a surprise show with a new rock band & I asked him if they were interested in a horn player. He said yes & I played with them at their first show that same night. I’ve been rehearsing with them ever since. James writes all the songs with Will Rodriguez who is our drummer. Christina Nunez from The Darts is our bass player & I met her when I started working at The Lost Leaf around 5 years ago. Neil is our keyboard player & I just met him recently when I joined Vampiros. They are all immensely talented & I love learning new tricks about music from playing with them.

Vampiros just released their debut album Oracle a few weeks ago. Where was the album recorded? Or perhaps you self recorded and produced the album? It sounds great!

Thank you! We recorded the album earlier this year at an old sprawling ranch house that’s down in the town of Oracle, Arizona. Since the late 1960’s it’s been home to a beautiful farming commune run by a bunch of hippies. Austin Owen from Petty Things & Los Puchos recorded us & he was a blast to work with. We drove down there for the weekend & we finished the entire project in 2 days. Recording live to tape is so challenging but it’s also exhilarating. That weekend was one of the most rewarding recording experiences of my life. Getting away from the stress of the pandemic & the impending doom of the upcoming election for a weekend to make new music was a much needed palate cleanser for my brain. I love how spooky & dreamy my saxophone sounds on this record.

Do you write your horn lines on the sax or do you compose them on another instrument and then learn them on your horn?

James & Will either give me horn melodies to work with or I compose my own riffs based on their ideas.

Are you still playing with Spicy Mayo at all? While Mayo seems more like an extension of the Exxxtra Crispy sound, Vampiros has a much different/darker vibe that I think contrasts well with the other band.

Spicy Mayo is my art rock project that performs as an absurd late night television show similar to The Eric Andre Show. I’m the main songwriter & we’re busy finishing our second album which is called Popularity, Vampires & Other Irrefutable Forces Of Nature which we’re releasing later this year. Oddly enough, I chose that title before I even started working with Vampiros Del Espacio. We worked with a lot of featured musicians on the new Spicy Mayo album including the beat wizard & trumpet god Torrey McDannald, the infamous Danny Torgerson from Captain Squeegee, Salah Moharram from Audrey Heartburn, Bailey from the old punk band Not Confined, and this dude named Larry who plays synthesizer on a metal track.

Vampiros is fun because they write songs differently than I do. Their atmosphere is so dark & powerful & brooding. It feels dangerous & ominous, like when the sky goes black unexpectedly from a cloud that swoops in & blocks out the sun. They challenge me to get comfortable with new chord progressions & soloing in different key signatures.

How have you been in this time of quarantine? Is Vampiros/Mayo still practicing/working on new songs at all?

It’s been weird but I’m doing okay. I work at a paint store during the day & I write new songs every day in my room when I come home. I don’t do anything else. Not being able to play shows has been strange but I’ve been using the extra free time to write more songs than I normally would so that’s cool. I have a whole third album written for Spicy Mayo that I’m about to start recording called I’m Bored With Life! I Just Think About Sex & Fucking Killing Myself!. Also I’m working on a short instrumental album of just drums & saxophone material called Meditations On New Levels Of Obfuscation.

I’ve been reading Bukowski lately & as for music I’ve been listening to a lot of modern hardcore. Trash Talk & Noothgrush & Ceremony & gnarly thrashy shit like that. I listen to a lot of Fela Kuti when I’m working at the paint store & SoundCloud trap shit like Lil Peep or Lil Pump when I’m driving around town. Also I really dig Kali Uchis & Doja Cat. I just re-watched Black Books which is a silly show about an alcoholic who owns a book shop & it has the greatest theme song of all time.

What’s upcoming for you? I know with shows still up in the air right now, you might not be performing live anytime soon… any additional info on Vampiros/Mayo releases or music videos planned?

Spicy Mayo is releasing our second album at the end of 2020. I’m also working on plans for an online cooking show that I want to film next year. Vampiros is working on new music too & we’re going to go back down to Oracle to record more music soon. Honestly just writing & recording more music every day until we can play live shows again.

Is there anything I didn’t ask about you or the band that you would want our readers to know about?

I’m moving to Philly at the end of 2021 & I’m gonna start a farm out there & I’m never going to come back to the desert. 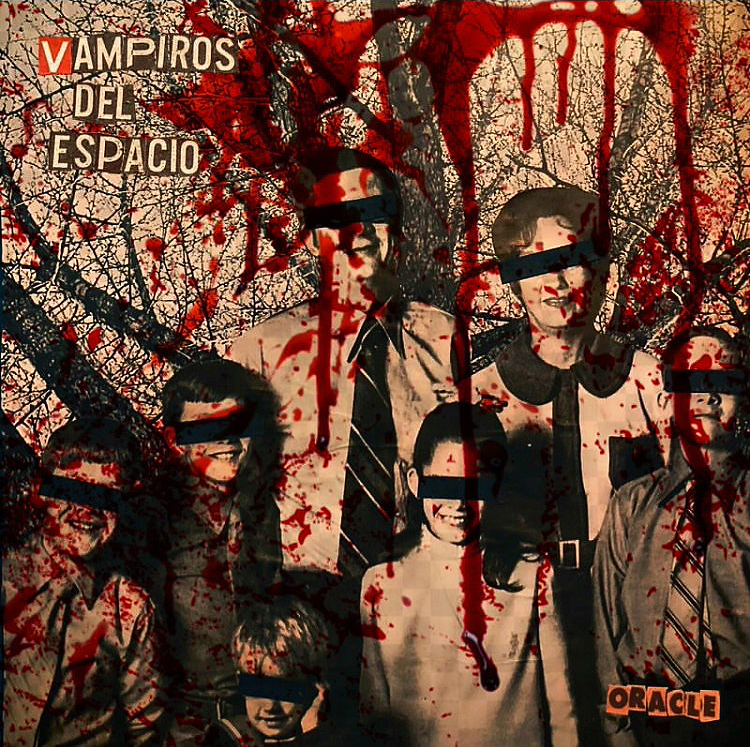