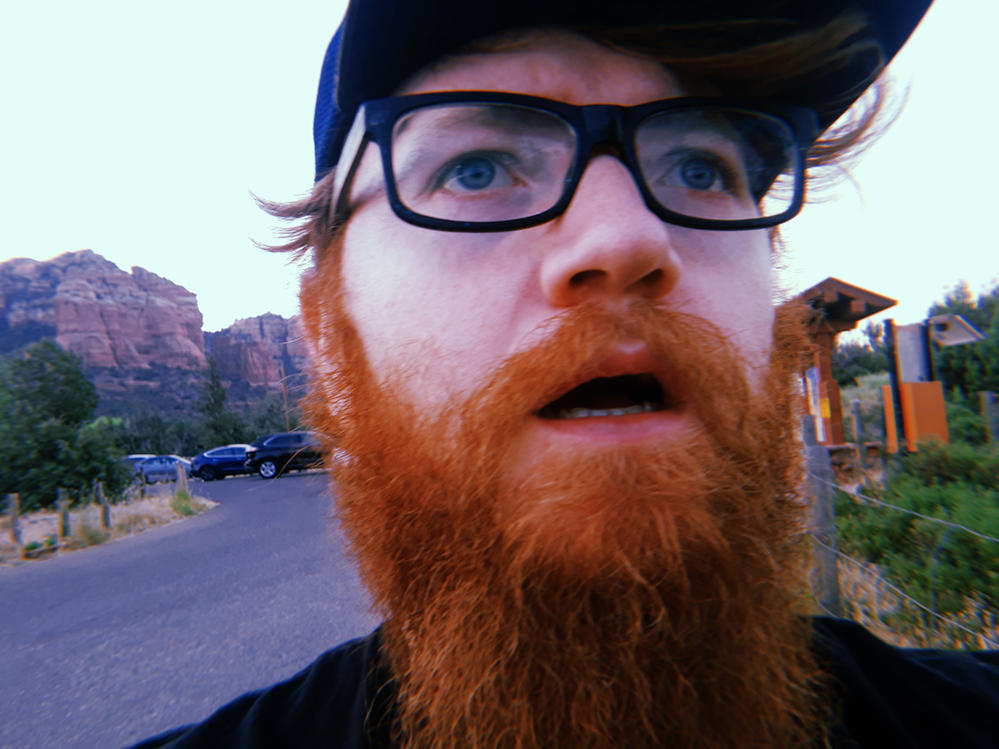 I’m Logan Greene. I’ve played in SO many bands, but right now it’s my solo stuff as The Logan Greene Whatever or in my band Big Bad. I also run the arts nonprofit/DIY venue, Groundworks (which you should totally check out).

I play and teach guitar, bass and ukulele. I also play some other instruments badly like drums, banjo, trumpet and keyboards.

I started playing in like 2001 so I guess I’m coming up on 20 years of making mediocre music that somehow I still enjoy enough to keep doing forever. I think I originally thought it was cool to play an instrument and I really wanted to be a cool guy. But now I know how not cool it is to be in your 30s and still play in a pop-punk band, so the thing that drew me to music in the first place has flew out the window. Now I just do it because it’s a fine way to pass the time I guess. Truly though, I have no idea how not to devote my life to music, but if I figure it out I’ll let you know.

My favorite kinds of shows to play are small, DIY festivals where everyone there becomes your best friend by the end of it. I’ve played some big shows and toured with some legit bands, etc, but there’s nothing like playing a punk fest in a small-mid sized town in the middle of the summer. Nope, nothing like that at all.

I first joined that DIY kind of scene in like 2007/2008 and played a festival with my band Dr Dinosaur called Crucial Fun Fest in Lexington, Kentucky. From there I started my own fest inspired by CFF called Brootal Sun Fest here in Tucson. After that some other kids in Albuquerque started Mountain Blood Fest inspired by what we did which in turn inspired Compost Heap in Denver. It felt like my amazing experience in KY was vindicated by the success of the other iterations of the fest. So, because it beget all of the other fests, that first Crucial Fun Fest has to be my favorite show of all time.

I don’t have a particular lineup for a dream show, but I do have feelings that I want to recreate for myself and others when I perform shows. Anything that is intimate, communal and positive is what I want to see in a show. That’s part of the inspiration behind Groundworks. I’ve been part of really cool, magical shows throughout the Arizona DIY scene like at Trunk Space in Phoenix, Cottage House in Flagstaff and Skrappy’s in Tucson. With Groundworks, I wanted to facilitate that magic for a new generation of artists in Tucson, so that’s what we aim to do (if this pandemic ever ends!).

This quarantine has really let me take full advantage of Spotify streaming. I’ve found out about so many cool bands just because they are running out of things to recommend to me. So now it’s a real mixed bag from completely unknown artists to mega pop stars and everything in between. I’ve especially been digging Grumpy, Telethon, BENEE, Loamlands and a whole bunch more. Other than new stuff, I still get down on my old favorites like The Ergs, Carly Rae Jepsen, Good Luck and The Avett Brothers.

I’ve nearly run out of TV and movies. Seriously, it’s all I’m doing in my free time. I’m an incredibly slow reader and a total dummy, so I don’t read as much as I wish I did. I feel like if it gets a 3-star or better and is on Netflix, Amazon or Hulu, I’ve watched it. I’m simultaneously proud and ashamed of myself.

My free time is mostly spent at Groundworks getting the space ready. Before quarantine, we had teams of volunteers in here building out the facility, but since mid-March, it’s mostly been me and one or two other folks at a time. So the process has taken long to build a stage, gallery, classroom, etc. But in the process I’ve learned like 10 new trade skills and feel so much more equipped to start the space strong once we get going than I did before.

Personally though, I haven’t done as much songwriting/practicing as I’d like. That’s actually the inspiration behind Groundworks’ current programs to encourage artists to make art during the pandemic. It’s such a unique time and we all have a perspective on it that may be lost if we don’t share our experiences. So, we’re using our platform to promote artists and contribute supplies and record videos and anything else we can do to encourage people to keep creating!

Probably just like our Governor or someone in a position of power to talk to them about what a bad job they’re doing. I think that even if it wouldn’t help, it’d make me feel better just to know that they are aware of how awful things are for the average citizen in terms of unemployment, stimulus money and other assistance. Right now I presume they know and they’re just awful people, but I just want to be sure.

I made a really good sandwich on sourdough the other day. I’m kind of hungry for that again.

One thing I want to start doing is making instructional guitar videos on YouTube. I’ve been a teacher for over a decade and it’s as much a part of my creativity as performing is. I think I want to see if I can hack it on the internet instead of just in-person! It’s a totally different skill than face-to-face, but it also seems really fun to interact with students in a different way. So, hopefully before the quarantine is over I’ll have some videos up.

My music is totally free at Bandcamp but it would mean a lot if folks could send a few bucks to Groundworks. It has certainly been tough for us without being able to throw shows/host classes, so any donation would really help out!