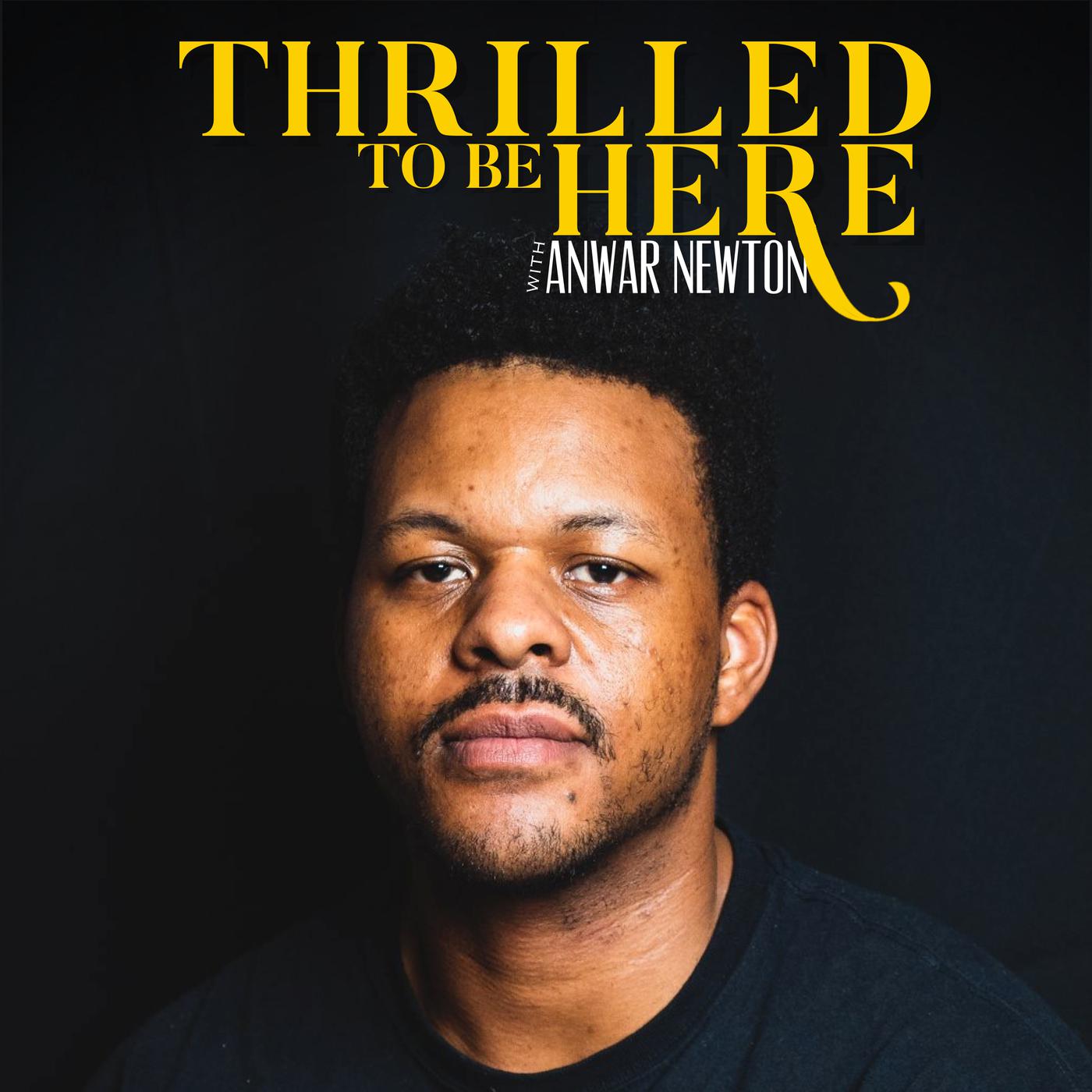 Phoenix comedian and podcaster Anwar Newton is funny. At least, I think he’s funny. As I’ve been following along with his podcast, Thrilled To Be Here, this year, I often find myself wondering if his wry and often biting humor might irk some. Not to mention his unfavorable view of the world hardly lends itself to the cult of positivity that pervades popular culture. Newton asks his audience to accept some less than palatable truths and he doesn’t gift wrap them in bright paper, but sorta just rubs them all over their face.

At the same time, he has this subtle way of adding a sense of camaraderie to the suffering because, if life is a pit of pain and misery, at least we’re all sinking in that pit together and we can share a few laughs about it on the way down. Now, Newton would probably say that some seats are better than others in this pit and some assholes are probably climbing on top of other people to gain leverage, but the metaphor holds.

As social isolation endures during the pandemic and the world continues to spiral into a murder-hornet-hellscape, Thrilled To Be Here has become a bit of a lifeline that grants me a little bit of perspective every week. Sure, the world is shit, but wasn’t it shitty last week too? As a new father, a comedian, and curmudgeon in the 21st Century, Newton never falls short on material.

And he was kind enough to grant me some time for an onslaught of questions on a range of topics from podcasting to comedy to parenting. Read our Q&A with Anwar Newton below and make sure to check out Thrilled To Be Here on your preferred podcast platform (or all of them and then like/follow/leave glowing reviews).

YY: It’s hard to know where exactly to begin, but I would like to find out what led you to comedy? Let me guess, you just love to make people laugh? I’m joking. I’ve listened to your podcast.

Anwar Newton: I was bored. A friend kept telling me I should do it and so one day I did. I’ve been at it 6 or 7 years now (unlike most comedians I do not remember the exact date I did my first set).

Let’s talk about Thrilled To Be Here and get the acknowledgements down. Who helps you bring the show to life?

Mike Enders produces and engineers it. Rhys Wilson does the video stuff as well as help from a couple of friends that I’m hoping will say something revealing at my funeral.

How do you prepare for an episode of Thrilled To Be Here? Is it different for you than getting ready for a live comedy show?

It’s actually a lot looser than doing standup. I’ll make a couple of notes of topics and then we just shoot from the hip for an hour and have fun.

Prior to this whole pandemic thing, you co-hosted a regular comedy show called This Week Sucks Tonight with another comedian, Michael Turner. Are you funnier than Turner? Do you feel you really had to carry the weight of that show on your own?

This is a hilarious question. Might be my favorite question I’ve ever been asked. Turner is funny in a suburban dad way while I’m funny in a “we might not live to see another president” way. I do miss doing This Week Sucks Tonight. That show really felt like it might have made us a name in the biz.

Seriously, I know you’ve made some jokes about this on Thrilled To Be Here, but do you miss the live gigs? Or are you just about that podcasting life now? No more late nights and drunken hecklers?

You predicted that the state – our state, Arizona – will be dead in four months as a result of coronavirus. Does your sense of hopelessness extend to the entire country or is it pretty Copper State strong?

You also sound rather resigned to this fate when you talk about it on your show. What’s your secret? Day drinking? A lifetime of disappointment? I know where my own resignation comes from but we’re here to talk about you…

A lifetime of disappointment is exactly what fermented my nihilistic vista. Having a new American horror revealed to you every other week will do that to you.

So, listeners of the show are well aware that you are a newly minted parent. How the fuck is that going? I know you often touch upon this topic in your show, but I’m interested in knowing more about how has it impacted you as an artist?

I’m wildly interested what thorny parts of my self will sculpt my kid. People always say I’ll make a great parent but I wouldn’t want me raising my kid.

What podcasts do you listen to? Any favorites that inspired you to start your own? Or maybe ones you’re hooked on now?

My favorites are The Tim Dillon Show and Slow Burn.

When you’re not working or podcasting or tending to the needs of your son, are there things you enjoy doing? Things that might have your attention right now? Shows, books, hobbies? Or is there nothing else after jobs/pods/kid?

I’m currently reading Running The Light by my friend Sam Tallent and I can’t stop listening to “Tiny Dancer” by Elton John.

Other than Thrilled To Be Here, anything else you would like to call attention to right now?

The cops and precinct that killed Breonna Taylor should be held accountable for her wrongful death.

Is there anything you would have liked me to bring up in this conversation that I didn’t address?

Should have asked me more about Bill Clinton.

Tags: Anwar NewtonComedianinterviewPodcastPodcasterQ&AQandAThrilled To Be Here