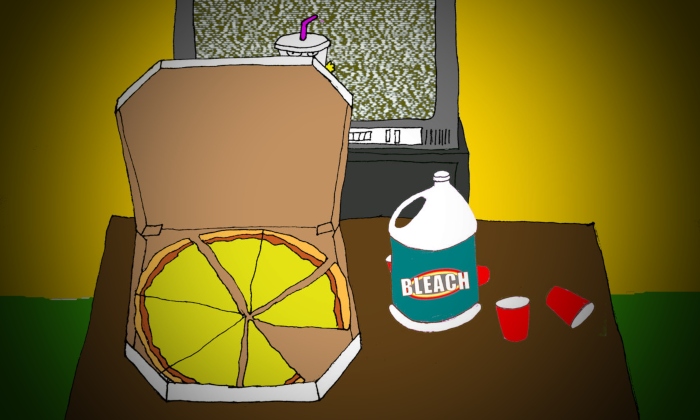 Alvie & The Breakfast Pigs are not touring and they are not happy about it. The confinement seems to be riling up the already wily band. Their latest release, Loud and Fast, features new songs that hit listeners just like the title suggests and “Tokyo” comes to us from that two-track single. A driving drumroll kicks off the song before growling lyrics and wailing guitars add their energy to the assault. Alvie & The Breakfast Pigs thrives on live shows and would be ready to hit the road to support Loud and Fast right about now, but given the current pandemic, they’ve had to get a little creative and released a comic book instead through the band’s Insta account. Check out “Tokyo” by Alvie & The Breakfast Pigs here, but make sure to stick around for “Jenny Flores” (the B-side track) too. You won’t be sorry.

We do enjoy the gritty acoustic alt-rock of Ghost In The Willow and they have a brand new EP lurking on the horizon so now’s the time to get excited. “Subconscious Drinking Problems” takes a lively look at excessive drinking once those reckless years of young adulthood have long since left. The single is full of that rowdy, angsty energy we’ve come to expect from Ghost In The Willow as it prods the awkwardness of that too-drunk person that is fumbling their way further from socially acceptable with each passing year. Enjoy some good times with Ghost In The Willow and “Subconscious Drinking Problems” — just don’t have too good a time and embarrass yourself and those around you.

This is not a drill. All you punk fans HAVE TO listen to this album in its entirety. Start to finish. The whole thing. Party at the Bleach House Volume 1 features not only the band Bleach House USA which gave us this single, but a wealth of AZ punk acts and even some from non-desert locales as far as Maine and Massachusetts. “Drink Bleach” kicks off this 21-track compilation that packs all the punch of a kickass house show. You know, the kind that starts at sunset on a too hot day in someone’s backyard with only the contents of a keg to keep you hydrated. “Drink Bleach” served as a great introduction to Tucson’s Bleach Party USA and I’ve been delving some earlier offerings the band has released this year. I do recommend further exploring all these things, but you should probably start with Party at the Bleach House Volume 1. You can score your own digi-download of all 21 tracks for the nominal cost of $6.80 and the throw your own backyard house show for just you and yours. Less people to share a keg that way anyway.