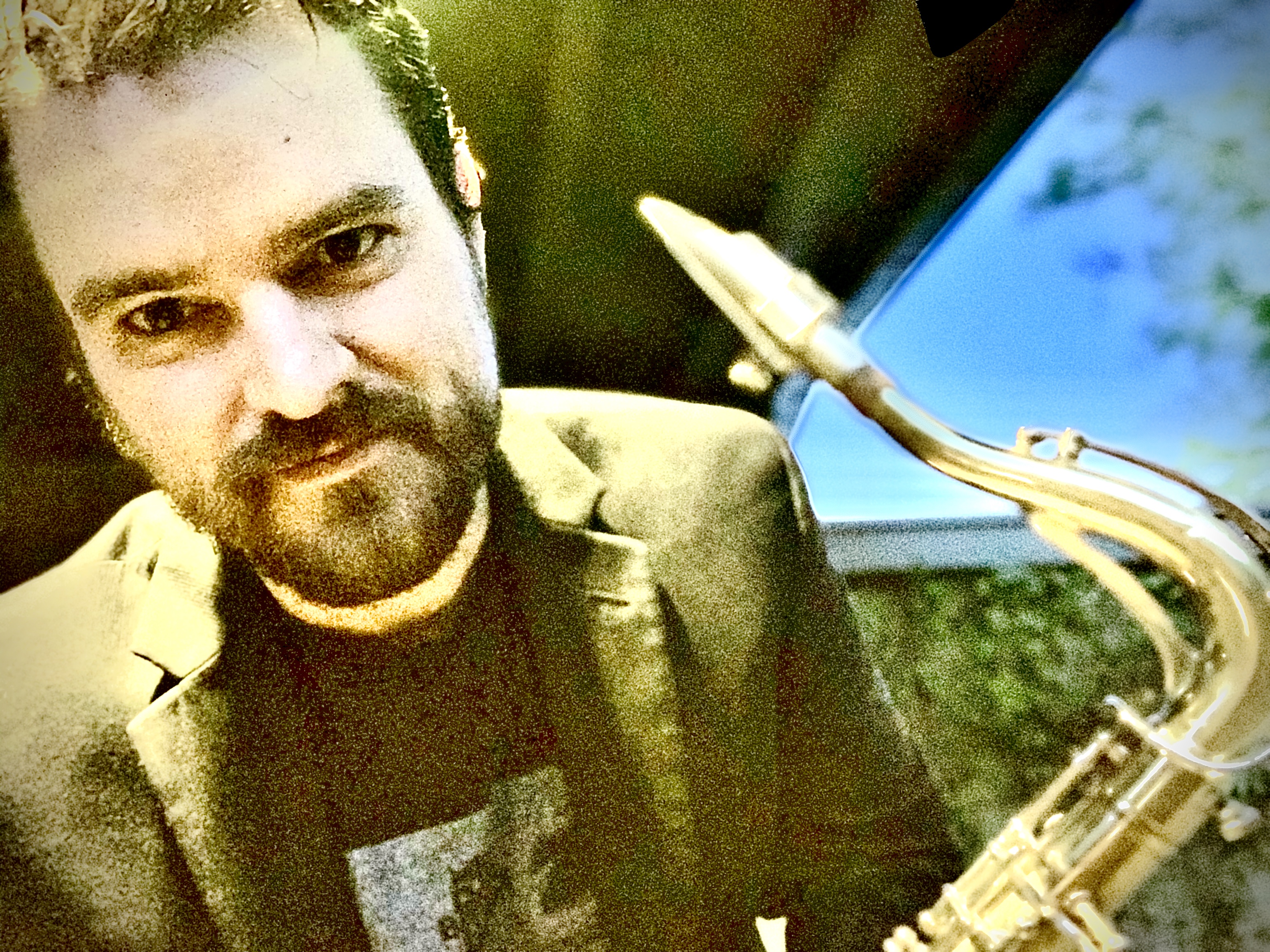 A year after releasing Purple Spectre, Michael Moynihan is back with his new solo project, bench sailor.

If you’ve followed Moynihan’s career at all in the past 14 years, bench sailor will come as a shocking surprise. At lease it did for me. I knew of Mike’s modern, original take on cool jazz. bench sailor is far different. While there are elements of this style still present, as well as the possibility of it returning on future releases, Moynihan is pushing himself into much more experimental territory.

And I don’t just mean experimental jazz. As Michael explained to me: “A couple of years ago I began to gravitate towards songwriting out of an ‘inner urge’ to create songs with lyrics, and a deep desire to incorporate my stylistic influences outside the realm of jazz. In bench sailor, you’ll hear strong elements of grunge, punk, indie rock, R&B, and hip hop, in addition to a heavy jazz influence.”

Although bench sailor released their debut album, Waste Love, and a follow-up EP, Dark Place, within one week of each other earlier in July, both sound very different from one another. I personally am drawn more to the avant-jazz sounds off of Waste as opposed to the far-out space ballads found on Place. As with all experimental songs pushing the bleeding edge of music, I feel like some tracks strike gold while others miss the mark.

I wanted to find out more about bench sailor however so I contacted “Spicy” Mike Moynihan and asked about his new project, his saxophone setup, and how he’s been during this time of quarantine. Read the full interview and check out bench sailor beow…

How long have you been playing the saxophone? Is that the instrument that introduced you to music? Do you play any other instruments?

Saxophone was my first instrument. I began playing the alto sax when I was 9 years old. When auditions for the band came around, I just knew I wanted to play the saxophone because my father had a tenor and had taught himself to play a bit. Saxophone was my conduit into music; through the saxophone I was introduced to great artists like Charlie Parker, Sonny Rollins, Lester Young, and Dexter Gordon. Once I got into jazz, I was down the rabbit hole—I couldn’t learn enough about music (and I still can’t)!

Haha, nothing wrong with nerding out a bit! I play a Selmer Mark VI tenor saxophone that was made in 1961! She’s a real beauty, her name is Shia (pronounced Shy-Ah). I use Rico Select Jazz 3M reeds, an Otto Link 7* metal mouthpiece, and a Francois Louis “birdcage” ligature. My setup is very special to me, because it helps me get a personal sound on my instrument. I also play a Yamaha Custom EX Alto, a Cannonball Soprano, and a Selmer Baritone Saxophone.

Where to begin? As I already mentioned, Charlie Parker, Sonny Rollins, Dexter Gordon, and “The Prez” Lester Young are some of my primary influences. Wayne Shorter is also a huge inspiration to me. Johnny Hodges. I would be remiss if I did not mention the great John Coltrane!

Of the modern saxophone players, I enjoy listening to Mark Turner and Michael Brecker. Really, I have too many influences on the saxophone to list here. I would encourage readers to listen to famous jazz recordings, then go on Wikipedia and look at the personnel listings for each album. From there, try checking out the artists who played on each recording and you’ll be down the rabbit hole in no time! Of course, the way we did it back in the day was to read the liner notes and dig which musicians were sidemen on the great recordings, then go buy their CDs! Sadly, this format has become obsolete, which is somewhat of a loss for music education. I mean, no one told me to do that, it just happened organically from the natural excitement of listening to a CD that I purchased for the first time.

You’d be surprised at how many young jazz students never think to check out the Wikipedia pages of their favorite artists!

So, your new project is bench sailor. Please tell me about it. Is it you playing all the instruments or does it feature other artists? How about the singing? I noticed one song features Erin Anderson but are the other songs sung by you? I also feel there are more beats/production on your albums than Purple Spectre, your previous band which introduced me to your music…

Thank you for asking! Yes, I play all the instruments and sing on all the current bench sailor records, with the exception of “Go Insane,” the song that features Erin Anderson, as you mentioned. bench sailor is extremely exciting for me because it represents a total synthesis of all my musical influences. I began to recognize a strong lyrical aspect to my musicianship (lyrical, as in the poetry of actual lyrics) that I was unable to express fully on the saxophone, by sheer virtue of there being a mouthpiece in my mouth—it’s rather difficult to sing actual words while playing the saxophone!

It’s actually quite a charming story of how the first bench sailor record, Waste Love, came about. I merely began recording some oddball musical ideas in my living room for the sheer joy of it, then I quickly dismissed them as garbage. About a year later, I revisited some of the ideas I had recorded, and I was surprised that I thought, “hey, there’s really something to this!”

From there, I embarked on an adventurous mixing experiment that involved a bunch of my friends coming over to help mix the record, because the raw material had been recorded rather badly. Johnny Hines, Julie Ann Robillard, Terek Wathogoma, Davis Jones, and Patrick Morris were instrumental in getting Waste Love to sound as good as it does! I’m really proud of the work we did on Waste Love and I hope people enjoy it.

bench sailor released a debut full length and then an EP within a week of each other. I can imagine a scenario where perhaps you have more time by yourself than before? You can’t meet up with your band and you can’t give lessons so you started recording and producing a bunch of tracks yourself? Are you still giving lessons over Zoom or JamKazam perhaps?

You hit the nail on the head. We’ve all been forced to contend with a huge amount of imposed free time during the quarantine, so I decided to spend my time recording and writing up a storm. I actually wrote and recorded three full length records during the quarantine so far, and am working on the fifth bench sailor album, Vision, right now. I am certainly available to give online lessons, so if anyone is interested in learning more about saxophone, flute, clarinet, piano, or recording and producing music, please do not hesitate to contact me!

On your EP, Dark Place, I don’t think I noticed a woodwind or flute at all! Are you moving away from these instruments and trying something new? It kinda seems like it. The title also suggests that you, like all of us right now, are going through some tough times…

Very astute observation. Yes, for some reason Dark Place did not contain any woodwind instruments, but I think that all my subsequent records feature a fair amount of woodwinds in the arrangements. I wouldn’t say that I’m moving away from those instruments, but rather that I am careful to focus on each song individually, producing and arrangement that serves the song, rather than trying to force woodwinds into every song that I produce. I really try to let the song speak for itself and try to listen for what it is asking for in terms of the arrangement. If you like my woodwind arrangements on Waste Love, don’t worry; there are quite a few more woodwind-heavy arrangements on my upcoming records.

Indeed, I went through some stuff recently which is where a lot of that brooding quality of Dark Place comes from. I went through a divorce, I got arrested. I have always felt that my art should be a reflection of my life experiences, so for better or worse, it’s documented on Dark Place.

How have you been in this time of quarantine? Is Purple Spectre still a band and do y’all practice/work on new songs at all?

I’m hoping that I can jump start Purple Spectre again, but with the quarantine it’s been difficult to find a way to get everyone in the same room. Kai Felix, our drummer, is going to be attending grad school out of the state, but I have someone in mind to fill in for him on the kit. If all goes according to plan, Purple Spectre will definitely be back in action for more performances and hopefully another album whenever the quarantine subsides.

I’m really thrilled about a few new artists that I discovered recently! Alfie Templeman, Declan McKenna, and Remi Wolf have been on repeat in my Spotify playlists. I love the funky grooves of Templeman and Wolf, and the production quality of McKenna’s work is simply stunning. All great songwriters in their own right. Aside from that, I always have to mention what a big influence Ariel Pink is for me. I even wrote a song for him called “Ariel” that will be released on one of my upcoming records, SUNRISES. Most of my reading recently has been technical and music-related, but I’ve been getting into the show Dark on Netflix. It’s really good! Amazing cinematography and a wonderfully twisted plot.

What’s upcoming for Mike Moynihan? I know with shows still up in the air right now, you might not be performing live anytime soon… any additional bench sailor releases planned?

So glad you asked! I have three albums finished that are just waiting to be mastered. My close colleague and friend Frank Bair is currently working on mastering the next bench sailor record, sunsets. After sunsets comes SUNRISES, which leads into the fourth record, Dew.

I’m currently writing the fifth bench sailor record, Vision, but I’m still in the preliminary writing stages. On Vision, I’m trying to focus on having really tight arrangements of all the songs, so I’m making it a point to chart everything out in traditional musical scores before I even begin recording anything. I can’t wait to see how Vision turns out, and I’m even more excited to release sunsets, SUNRISES, and Dew!

I hope people will stay tuned to bench sailor by giving me a like, follow, subscribe, and a share on streaming services and social media, because there is a lot of great music to come!