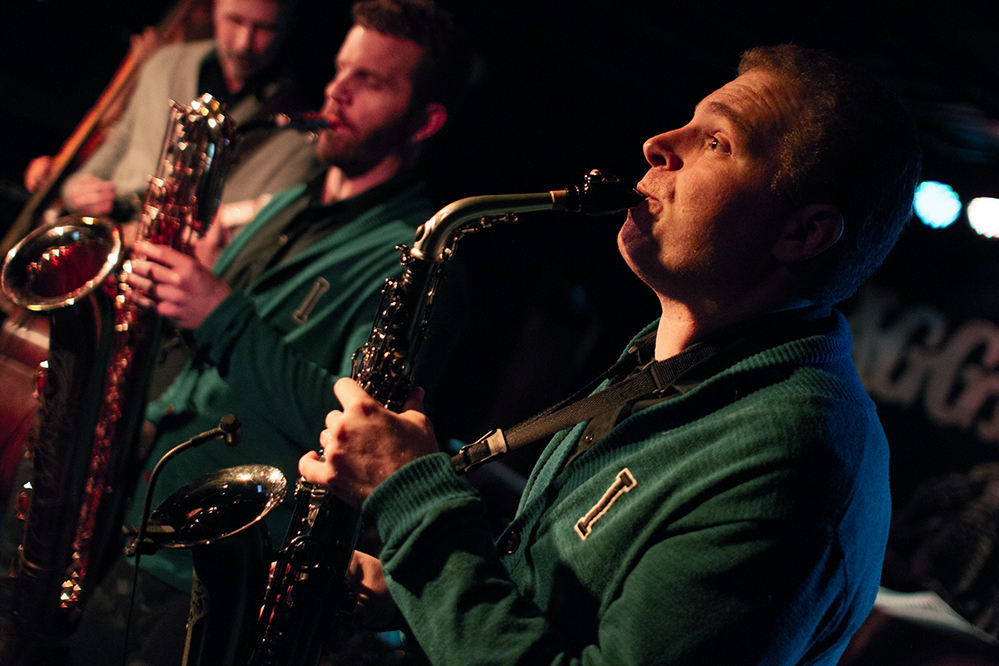 I first saw Aaron Goodman play the sax with Liam and the Ladies at their very first show in 2009. I was instantly hooked to his style and ability to solo so well over their quirky ska rhythm. These days, Goodman is part of the riff/jam/rock/ska quintet Mr. Incommunicado, who recently released their latest album, Just Say Yes.

Like their debut album FLÜD from 2017, Just Say Yes is third-wave inspired ska-reggae along the lines of classic bands The Toasters or Let’s Go Bowling. So, along with baritone saxophonist Dan Allen, there’s definitely plenty of room for some sweet saxophone solos. Vocalist/guitarist/principal songwriter Bradford Knights, drummer Troy Maskell and bassist Bart Applewhite comprise the rest of the 5-piece, laying down a solid groove for some nasty horn lines. Featuring band members from Kongo Shock, Phoenix Afrobeat Orchestra, Dr. Delicious, and more, you can tell right away these boys don’t fuck around on their performing ability — and their live show reflects that.

Recorded, mixed, and mastered by Jalipaz at Audiocofusion, if you’re into the ska at all I would definitely recommend checking out Just Say Yes. Track highlights for me include the high energy album opener “El Guapo”, gang-vocal heavy “Molly”, the minor lament “Fish Chips and Guiness”[sic], and the slow-paced instrumental “Urban Heat”.

I wanted to find out more about Mr. Incommunicado and what Goodman has been up to so I contacted him with some questions and he graciously provided some answers. Read on to find more about Just Say Yes, how the band has been getting on in quarantine, and Aaron Goodman’s “saxophone story.”

YabYum: How long have you been playing the saxophone? Is that the instrument that introduced you to music? Do you play any other instruments?

Aaron Goodman: I’ve been playing the saxophone since fourth grade, and that is really what introduced me to music. I played sax for the most part up until high school when I played French horn then switched back to sax in college. I also play clarinet and flute and I wrote many of the Mr. Incommunicado horn parts on the flute.

I play a Cannonball alto sax, a Firebird tenor, and a Chateau soprano as I like finding quality saxes at a lower price than the bigger name horns, so some of the brands I play are lesser known. I play a Vandoren mouthpiece on alto, Mouthpiece Cafe mouthpiece on tenor, and a JodyJazz mouthpiece on soprano all with Rovner ligatures. Both Dan (our bari sax player) and I play exclusively on Légère synthetic reeds. I find that Légère reeds not only last much longer but are so much more consistent than traditional cane reeds. They also sound great!

Players like Dexter Gordon, Cannonball Adderley, John Coltrane, Sonny Rollins, Jackie McLean, Roland Alphonso, Johnny Griffin, and Hank Mobley were all greatly influential on me. From a modern perspective, there’s this incredible album by Ernest Ranglin called Gotcha! with Antonio Hart on sax. It blends ska, reggae, and jazz in a way that I hadn’t heard before. Other modern saxophonists are Chris Potter, Miguel Zenón, Donny McCaslin, Rich Perry, and Chris Cheek to name just a few. 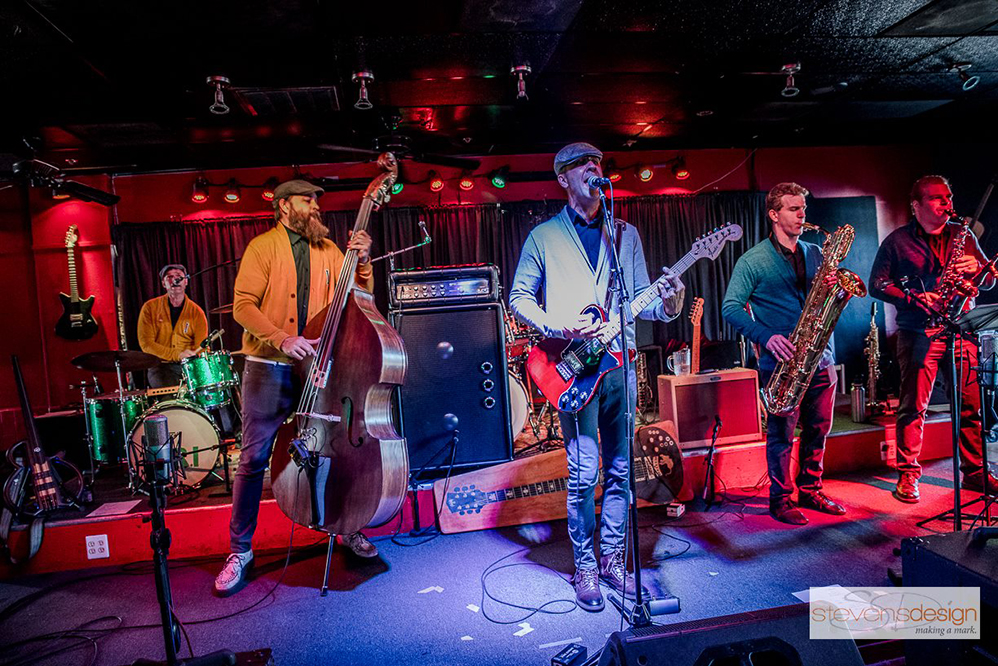 How did you hook up with the cats in Mr. Incommunicado? Or maybe you helped form the band? When was this?

I knew our original drummer, Billy, from Liam and the Ladies who practically begged me about four years ago to join his new ska band, Mr. Incommunicado. They were already a band for a bit before I joined. Not long after, I recruited Dan who I’ve known since we played together in a community high school jazz band.

We’re you in any bands between Liam and the Ladies and Mr. Incommunicado?

While I played with other bands on occasion, I wasn’t an actual member of a band after Liam and the Ladies kind of just stopped playing. I played in the PVCC jazz band primarily to keep playing. I know Elle is so busy with other things, but if I ever got the call, I’d do a LATL reunion in a heartbeat. Look for a possible Mr. I cover of a LATL song at some point!

Like your previous album, Just Say Yes was recorded by Jollypaws at Audioconfusion. I know Jal likes to record live so I would assume the entire band was set up and recorded live? Were more than just the vocals overdubbed at all?

Jalipaz is amazing to work with, and he really let us be flexible in how to record the album. We only did the instrumental tracks (“You Got It” and “Urban Heat”) live. Everything else we recorded the guitar, bass, drums followed by vocals and then horns. Last was the gang vocals. I also wrote a violin part on “Keep Dreaming” and we had Sam Camacho, who plays with the local band Damn the Weather, come in to record on that song after everything else was done. I was really happy with how that one turned out. 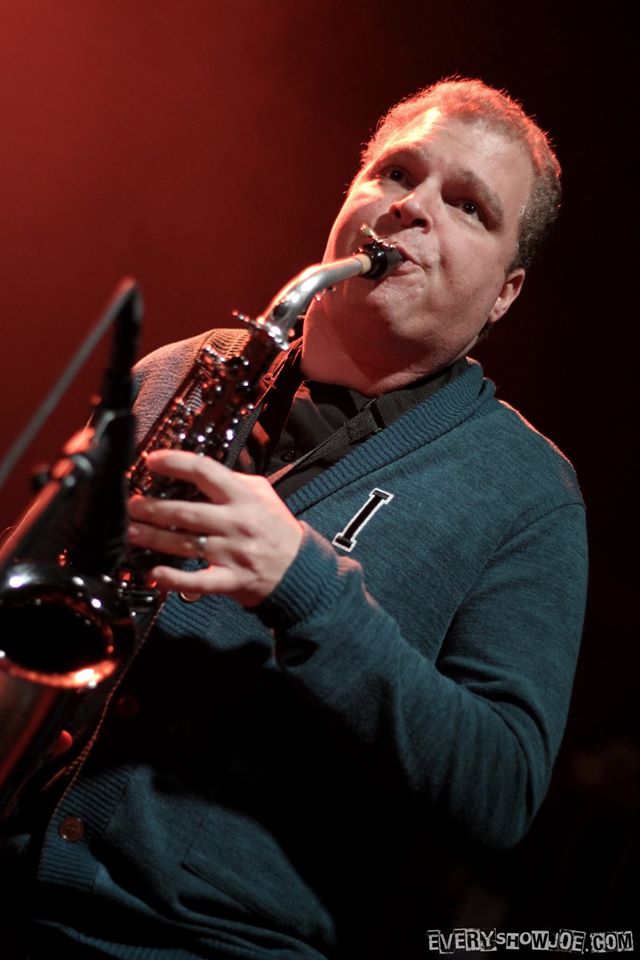 photo by Every Show Joe

Do you and Dan write the horn lines for the band and is the song-writing collaborative or are complete songs brought into the group and everyone learns their respective parts?

Bradford writes almost all our songs where he sings. He has what seems like a million songs that he’s written, and we go through and pick the best ones for Mr. I to do. He’ll send me recordings with just him and his guitar then I write the horn lines. Sometimes while I’m writing the horn parts, I’ll make some structural changes to the song. After I write the horn line, we’ll play the song as a band and we’ll make additional changes as needed after hearing it with the full band. I wrote our instrumental songs as well as “No Peace” (although Bradford wrote the lyrics and the solo chords). Dan wrote the horn line on “Everly” as well.

How have you been in this time of quarantine? Is Mr. I still practicing/working on new songs?

I’ve been fortunate enough to work from home during the pandemic, and my wife and daughter are also at home for the summer. I’d also like to give a shout out to all the essential workers who aren’t able to work from home, I really can’t thank them enough for all they do. Mr. I is still writing songs and practicing every few weeks. We’ve been able to practice in a location that allows us to distance and stay safe. We’re hoping to find a way to record in the next few months, so we may have some new music to share with the world soon.

I’ve been listening to a lot of instrumental music while working. Bands like Polyrhythmics, Ikebe Shakedown, Jungle Fire, Kneebody, Lettuce, and Snarky Puppy all have some great relatively recent albums. I’ve also been listening to classic ska and jazz such as The Skatalites, Hank Mobley, Cannonball Adderley, Miles Davis, and Ernest Ranglin. I haven’t watched too many TV shows, but Better Call Saul, Ozark, The Mandalorian, and The Expanse (I’m currently reading this book series which I recommend) are all solid.