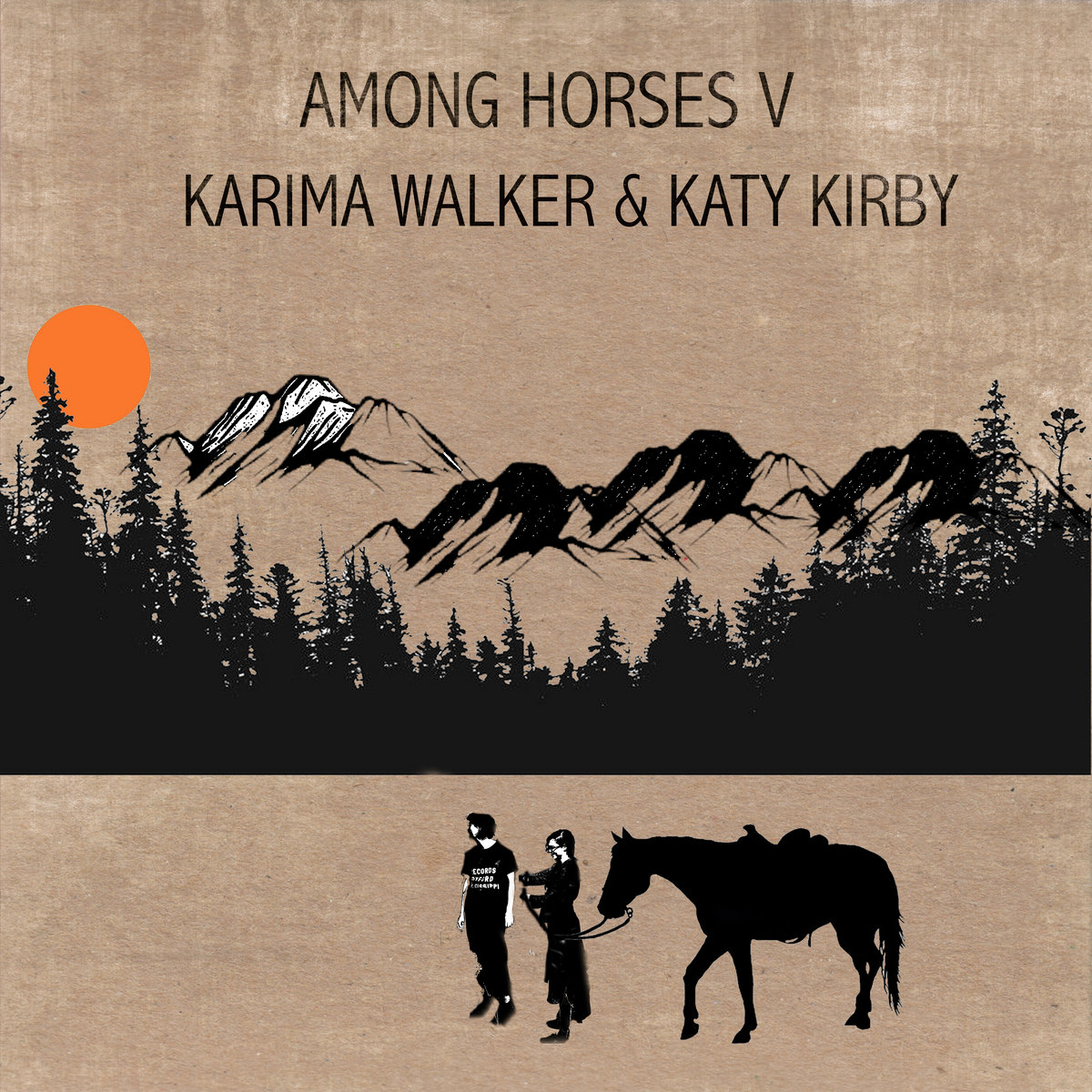 I’ve long been a fan of Karima Walker, even before Hands In Our Names dropped, so when I heard about this project I was curious not only about the music that would emerge but about the creation process itself. That’s because her most recent effort is not a solo undertaking, but something distinctly different.

Among Horses is an ongoing project from Son Canciones, a Barcelona-based label that seeks to brings artists together to make music in unique spaces. For the Among Horses series, Son Canciones pairs songwriters together to write and record an EP. Tucson’s Walker was invited to take part and paired with Nashville-based songwriter Katy Kirby.

The five songs that make up Among Horses V are striking yet simple – simple in the way one might describe salt or snow as simple. There’s a stripped down approach on the instrumental end that keeps the focus on the songwriting and the elegant earthiness of the vocal performances. Listening to this album gave me the feeling of passing an entire day laying by the side of the lake with nothing to do and nowhere to be. I can’t think of the last time I felt that pause.

So, of course, I wanted to ask a million questions about recording the EP, Son Canciones, and the experience in general. Karima Walker was kind enough to indulge me. Check out our Q&A below and make sure to take in Among Horses V from Karima Walker and Katy Kirby. It’s not to be missed.

So, this seems like a really unique music-making experience. Perhaps you can tell us a little bit about Son Canciones and how you came to work with Katy Kirby on this EP?

I first met Son Canciones a few years ago, when I was planning my first overseas tour. I was early in the booking phase and, out of the blue, received an email from some folks in Barcelona. They’d found my music on Bandcamp and had made a habit of simply inviting the musicians they liked (from all over the world) to come play their city. Because of the serendipitous timing, in the midst of booking a European tour, I accepted their invitation and it was one of my favorite shows of the trip. They mentioned something like a songwriting residency at the time and then a few years later they asked if I’d be interested in coming back for this collaborative project with Katy.

Now, were you familiar with Katy Kirby or her work prior to working on this project?

I wasn’t! I immediately looked her up. Her songs are beautiful and her style is so different from mine, I thought this would be a really special chance to dive into writing alongside someone’s very different method. I figured I could learn a lot and I was right about that.

How much time were you given to settle in and write the songs for this release?

Oh not much! Hah! Almost better to not have that much time overthink things. I arrived on a Saturday and we headed out to the horse property the next day. By the following Sunday we were back in Barcelona. We had about 3-4 days of writing time, and about 1 1/2 days to record with our engineers Alain Quateau & Lieven Scheerlinck.

Did you feel like the timeline added to the experience by structuring the days in a productive way or detracted from the songwriting experience? I guess, at the same time I should be asking if you generally write on a schedule or just when you feel inspired?

In this situation, it definitely added. I didn’t think I could work that quickly and still actually like what I was writing. We were also being hosted in a beautiful place, and Mabel and Lieven were preparing all our meals. They were like, “all you have to do is write songs”. What a dream. Typically though (many but not all of) my songs take a long time, made in the context of normal life and balancing lots of different things. I’ve always admired people who show up everyday and hold space for songs to come into the world, like as a job or a practice or a meditation, and this was a really fruitful opportunity to invoke that.

What was the environment like where you were working? To my understanding, Son Canciones provides some picturesque surroundings for the artists they bring together for collaboration.

We were in the pre-Pyrenees Mountain region, on a property that boarded old retired horses, in a guest house over the stables. One of my favorite things to do was to walk down the dirt road for about 15 minutes and drink from the freshwater spring. It was absolutely beautiful.

You and Katy Kirby sound like you’ve been playing together for a lifetime. Do you attribute this to a wise pairing on the part of Son Canciones or did you both just click from the start?

I think Son Canciones did a really great job pairing us, I think they’re really amazing and careful listeners. Despite Katy and I having different styles, there was a lot of common ground and references.

Okay, now to get to the heart of it, what was it like to work in collaboration with another songwriter? Did you find it easy to interweave your styles and ways of working? Were compromises made – creatively or personally?

At first it was super awkward. We really just sat and looked at each other, talking around things and I remember feeling really shy and sweaty, trying to figure out what to contribute. “Right by You” was probably the most actively collaborative as well as the last, and maybe easiest, to write. We decided to make something like a country song and it felt so easy to throw lines out, explore metaphors. Deciding to “write a country song” is in a lot of ways much safer and playful than, “I’m going to share deep vulnerable thoughts that might be a song”.

I’m typically pretty earnest in my writing. I don’t know if I would say ‘compromises’… I do think there are some really interesting questions around creative control in collaborative settings. We share power and control to contribute to something bigger and better than any single person’s effort. It’s hard to put your voice in someone else’s hands but a often it’s worth it, and that goes not just for songwriting collaborators but also engineers and producers, all of it.

What was the writing process like for you on this album? Did you work on songs individually and then flesh them out together? Or was it more of a team effort from the get-go?

A bit of both. It began more as a team effort. Then we would go out on our own for certain songs or parts and then come together. Even for songs that were written individually, we would hold space for each other to share.

Can you tell us a bit about the recording process? I understand the studio was solar-powered and special effects weren’t used.

That’s right. Similar to the writing, there wasn’t time to overthink the recording process. We would stop for trucks passing, dogs barking, blips in the solar. It was a good practice in embracing imperfection and the generative power of limitation.

What’s next for you? Any new projects on the horizon?

Yes! I have a full length record coming out around the end of this year.