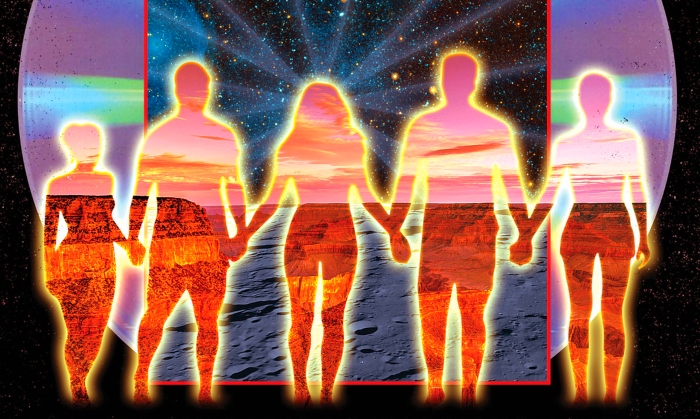 Through the horrible viral haze and murky malignance of surfacing hate we’re seeing all around us this year, there is a glowing amethyst light to remind us there is a different kind of world that might be waiting on the other side of all this chaos. And Treasure Mammal is that light. You might think I’m being hyperbolic, but I swear on everything I hold sacred, I believe this to be true: Treasure Mammal can save us. We all need to hug more, hate less, accept individuals in all their strange wonder, connect with strangers, reflect on the real emotions we attach to the seemingly inconsequential, laugh at the absurd in the face of the existential, combat human degradation and social injustice, and dance more… maybe in leotards. “Online Dating” is the first single from Treasure Mammal’s forthcoming album, Grammy Nominated, which is set for release in September. The yearning for human connection hides in the humor while the synth-drum-combo makes you want to writhe around. Good times. Get your pre-order in for Grammy Nominated now while the gold vinyl version is still an option.

Before you dive into “Handsomer” by Molly Moore and Maty Noyes, be warned that this one is going to wiggle its way into your head and might not want to leave. Uh, like, ever. This single comes to us from Molly Moore’s upcoming album, Voice On The Internet, which delves into the divide between the real and the ideal that of us 21st Century digital dwellers understand. The New York native has some sharp observations and slick style that you can sample on “Handsomer.” And, who can’t get behind the statement, “I don’t need a man, I just need a manicure,” seriously? This song’s sticky. Follow Molly Moore on Spotify to stay apprised of the new album (and more singles)!

I don’t know if I want to fight someone or dance when I hear this song. I think it’s a little of Column A and a little of B. The LA duo known as Sleepover make thrash pop that should be listened to loud when you need to diffuse bad feelings. In fact, Sleepover “wrote this song a year ago to blow off a little steam” and you can feel that charge in the purging of agitated energy on “Run It”. Sleepover is one of those side projects for L.A. County cool cats that started in at backyard party in Venice. High art, low overhead. Unleash some pent up rage with the Sleepover.