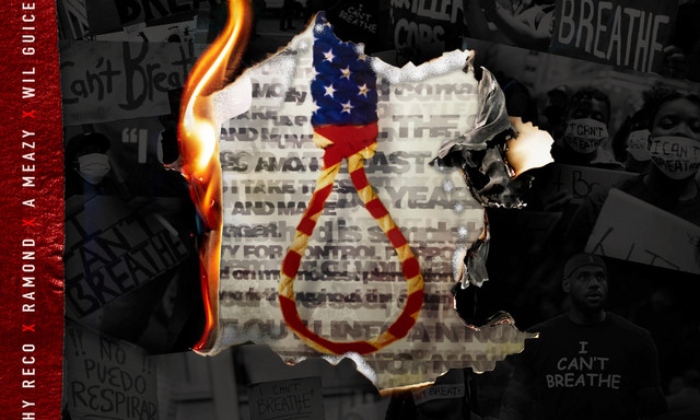 This is an important moment in American history and, hopefully, it will prove an important turning point. Many artists are adding their voices to commemorating this moment with songs of protest, or outrage. Colorado’s Hip Hop artist Ramond released “I Can’t Breathe (Again)” through Barbershop Uncut just a few weeks back. In addition to Ramond, the song features the talents of  Chy Reco, A Meazy, and Wil Guice and was produced by Mic Coats.The song delivers a powerful message with matched energy in the performance. “Can’t Breathe (Again)” kicks off with hand drums before the soulful sound takes flight. The strength of the verse against the emotional hook feels like the divide between the public and private faces so many are faced to wear day in and day out. This is a track that should be heard.

One More For Safety

An Illustrated Mess formed back in 2011, but they didn’t release their latest, long-awaited album Last Night, and All of Our Glorious Mishaps until December 13, 2019. And now they’re back with the follow-up, One More For Safety. Last Night was the culmination of years of stress and trauma, but the new release is the hope that follows the purge of pent-up anguish. And what a time to pause for hope. That doesn’t mean they aren’t tackling the serious topics, but they are looking forward instead of looking back this time. An Illustrated Mess joins the powers of Prosodic (emcee) and Cecil Tso (beatmaker) for the betterment of Hip-Hop everywhere. Much like their previous album, they took this opportunity to shine light on other Arizona artists, but this time they connected with musicians near and far (like, Vienna far), so expect to find cameos littered throughout One More For Safety. An Illustrated Mess is putting Hip-Hop from Dinétah on the global level now.

This DMV-based artist reminds us that beneath the global struggles is that day-to-day grind. Dayon Greene hits on all the hard spots in this new single: shitty day jobs, that ex you still think about, family drama. Greene doesn’t lean heavily on embellishment in the underlying soundscape in “Pride Suicide/Foe” but he doesn’t need to. His strength is in his lyrics and their delivery. And that’s certainly not to say the instrumental end leaves you wanting, but it’s certainly not the focus here. “Pride Suicide/Foe” can be found on Dayon Greene’s new album, Me, which dropped last week. And, srsly, that album is pretty fucking slick so check it out on Soundcloud or Spotify or wherever you do your album thing.