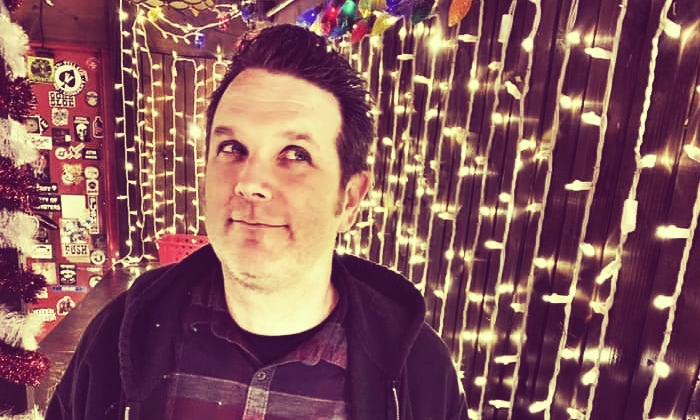 I am Tom Reardon. I currently play in a band called The Father Figures but I have been in lots of bands.

I play bass, mainly, but usually write on guitar.

Since 1987. I love music and I knew at an early age that I wanted to make some music and then took the leap just after high school. I think seeing some of my friends play our school talent show when I was a sophomore cemented it for me.

Oh wow. That’s a really hard one. My first band, Religious Skid, got to open for Fugazi in 1989. That was amazing and inspiring and I’ve still got their first EP that they autographed for me that night. With Hillbilly Devilspeak, we had so many great shows. There is one in Bakersfield that stands out, though, because of the mushrooms, the drag queen, and a really eager new fan who just had to have a shirt.

With Pinky Tuscadero’s White Knuckle Assfuck, I would say opening for Nomeansno at Hollywood Alley was unforgettable and our very last show in March of 2019 was great, too. With North Side Kings, there were a couple…one at Gilman Street in Berkeley was amazing and I got a killer compliment from my late, great friend Chumley that night. He said I was “the second best bass player in hardcore.” He was in a little band called DRI for awhile. I also enjoyed getting to open for the Misfits (without Danzig, that fucker).

Playing punk rock bowling in 2018 was super special because The Father Figures were on the main stage and The Freeze also played the same day and I was playing with them at the time. We (TFF) got to hang out with John Doe from X and Joey Shithead from DOA backstage, which ruled.

Anytime you get to really connect with an audience is hard to beat.

I loved playing Al’s Bar in LA a lot, so maybe there and the lineup would be The Father Figures, Redd Kross, Butthole Surfers, and The Who.

I’ve been listening to the Replacements and The Damned a lot. I’ve also been digging the new JJCNV. Good, noisy stuff. Other stuff I can’t get enough of lately….Gordon Lightfoot, Disposable Heroes of Hiphoprisy, and No Volcano.

Unbreakable Kimmy Schmidt had got my attention. I’ve been kind of saving shows since TV will not be great for awhile. I read all three of Tommie Vaughn’s rock and roll trilogy, too, and they are super fun.

Playing guitar a lot. Writing a lot, too. My wife, Rhondi, and I spent a lot of the early evenings sitting on the porch with a beer or cocktail when the quarantine began.

I would Zoom with Dale Crover of the Melvins. He’s a great conversationalist.

We just had our first TFF practice in about two months yesterday. I’ve been trying to get my daughter, Teresa, who’s almost 14 to play her drums so we can jam. I’m also working on a secret project with some friends that, if it comes to fruition, will be amazing.

There are records and tshirts available for The Father Figures at both azpx.com and sloperecords.com and we are on all the cool music sites. As for the older bands, I’ve got some Hillbilly Devilspeak CDs I’m happy to give folks. Who knows when we will be able to play live again, but we love it when people come see us play.