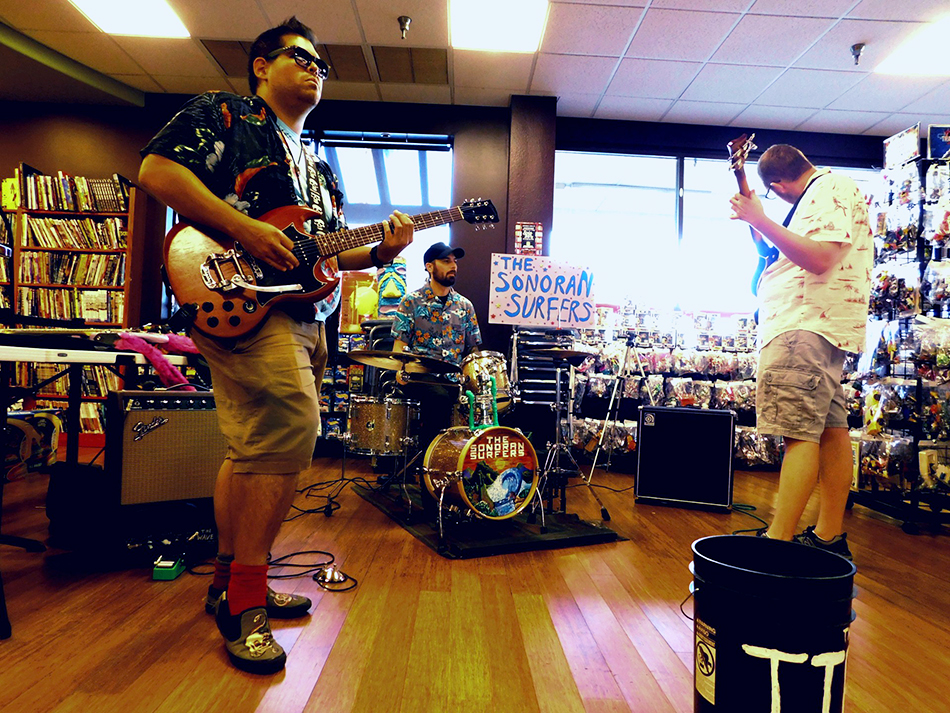 I play guitar, bass, drums, accordion, mandolin, harmonica, clarinet… the list goes on! For Sonoran Surfers, I’m playing guitar. Guitar has been an obsession since I was a young child and surf guitar highlights some of the coolest guitar sounds! For the band I usually perform on a modded out Squier Vintage Modified Jaguar through a Fender Deluxe Reverb ToneMaster; which is very surf appropriate!

Sonoran Surfers had its humble beginnings in early 2019. I had always wanted to start a surf band. I never knew what to write about regarding content. It became clear to me that I wanted to highlight something that I was familiar with: I wanted to bring attention to the landscape, desert animals, and surroundings that I grew up in. So, I started a surf band themed after all things Arizona related! I had recruited local drummer Russ Hill and Todd Hoover (The Invisible Teal) on bass guitar and played extensive shows including many hosted by Bookman’s Bookstore around town. It has been a lot of fun and a work in progress at the same time.

As the Sonoran Surfers, I would say my favorite show had been at the Rhythm Room with The Surfside IV. It was good to entertain the masses with some thunderous surf music! Personally, I have played in a few other local greats in the area including Soft Deadlines (on bass during their ‘Go Dark’ album performances), Kim Jong Swoon (a short lived project headed by Echo Bombs frontman Eddie Horn), and a few other one-offs here and there. Fantastic time all around playing around town at Rogue Bar, Time Out Lounge, and so many others!

It would be great to perform along with some of the surf greats that are current like Daikaiju or The Surfrajettes. We have also made some good friends online; anyone in the Altered State of Reverb catalog would be a great pleasure to perform with including The Seatopians. The Swongos is another band that comes to mind. Any of our friends would be great!

There are always a lot of bands in circulation in my playlist surf and otherwise! The Smashing Pumpkins, Cursive, the new Alestorm album, Satan’s Pilgrims, The Madeira, Pat Metheny, Jamiroquai… The list goes on and on.

Lots of Kids in the Hall. Great show. Lots of laughs.

Yes, I recorded a full EP of demo recordings during March/April at home and am working on a follow-up. I have become much more familiarized with the home recording process and recorded all guitar, bass, drum programming from my home. I make sure to ride my bicycle around Tempe Town Lake a lot and go do some physical activities like jogging and jump rope, too! It’s always good to go on a hike around Arizona to find inspiration for new songs as well.

Any time I am able to reach out to friends via Zoom is great. We have had some birthday parties and other good meetups with friends. It has been a valuable tool to keep connected and feel included.

I have been a big fan of the Beyond Burger recently and quesadillas. That has been in regular circulation. That and lots of almond milk and cereal.

There are a few other music projects in the works that I am trying out. Some gothic rock, shoegaze/indie, more instrumental… I think of things in terms of what will be able to be marketable and enjoyed by friends in the end to distribute.

Following our account on Instagram would be very helpful and is where I communicate most new information for The Sonoran Surfers.

I have a Bandcamp for the band where I have uploaded our Jumping Cholla EP for free download! We also have a YouTube channel with past performances.

When things become more open, we will try to perform more shows around town and would love to see anyone come out and listen to us play music! 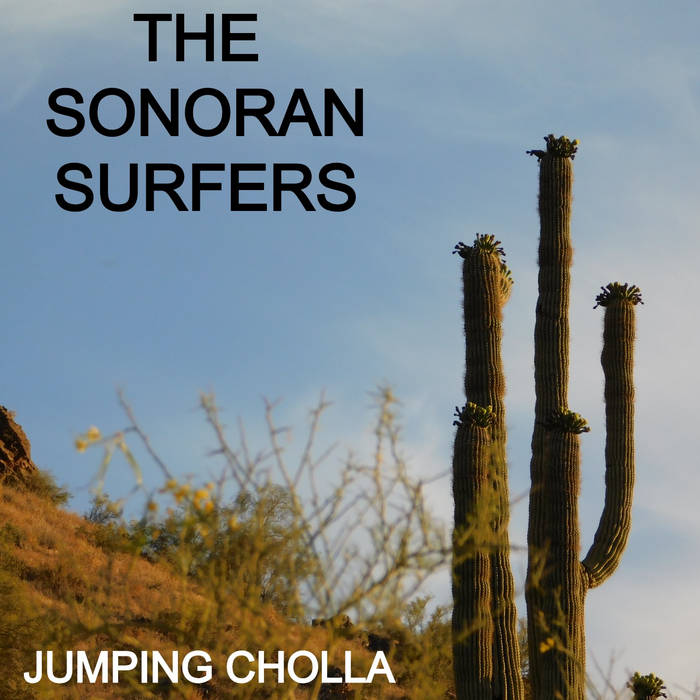