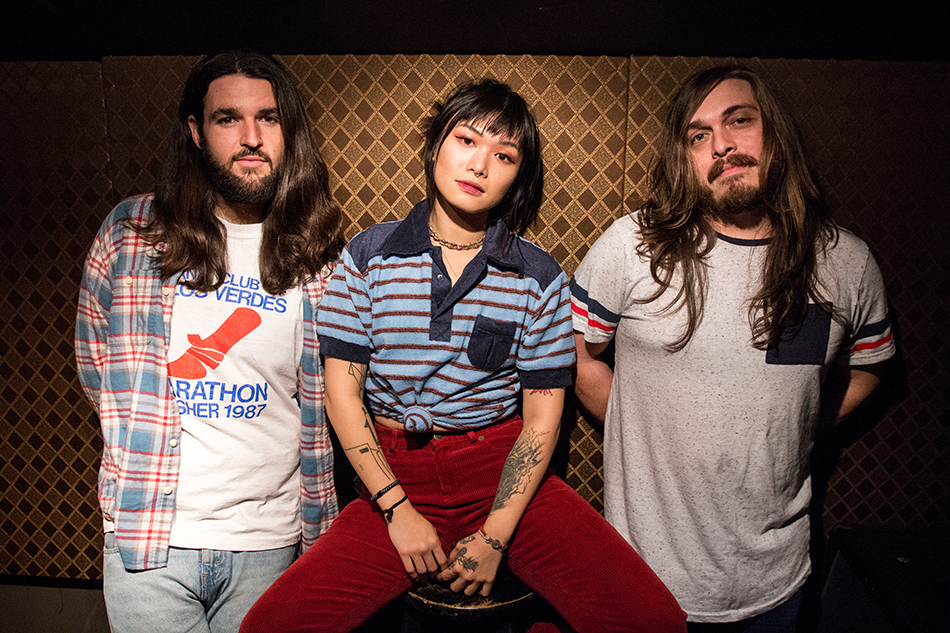 I’ve spoken to a lot of musicians in my life. If I’ve learned one thing from these conversations it is that it is hard to pursue music in a balanced, healthy way. There’s a never ending wave of variables threatening artists–economic instability, narcissism, obsessiveness, and insecurity to name a few. So when you encounter somebody balanced, they really stand out.

I believe Yvette Young is one of those special people who has arrived at a balanced place. She might disagree with this categorization, and I’m sure she’s still got things she wants to improve, but from my perspective she has managed to compose incredibly impactful music with her band Covet while gracefully navigating the pressures of being a generational guitar talent, a social media phenomenon, and a bandleader.

I spoke with Yvette before the June 5th release of Covet’s album, technicolor.

Alright, so if you want to go on the record, we can start there. You’ve had a really busy couple of years. What are some of the things, both and good and bad, you’ve been processing since you haven’t had to live the frenetic touring lifestyle?

Well, one really awful thing happened to me last year…or I guess this year. And it was bad enough that I had to drop off of tour. It was very traumatic and I’m still actually working through it, getting therapy and everything. I feel like I never had time to deal with it because I had to work and write an album.

And the album is an amazing source of therapy for me–being able to channel all of my awful feelings into music is such an amazing privilege–but I feel like I never actually had time to deal with it. So now it is time for me to think about everything that has happened and have time to reflect on everything that is going on with me.

I am also feeling incredibly inspired now that all the deadlines are gone. Before, I didn’t feel like I had time to try anything new. Time is currency, and when you don’t have a lot of currency you have to be careful about what you spend it on. When you have a lot of time, you’re more likely to experiment and take risks even if they’re not fruitful.

During quarantine, I’ve heard some people–who are privileged enough to be financially stable and physically safe–talk about how welcome of a break it has been from the constant stream of work. I was curious if you had any thoughts on that and what you think it might say about our culture at large?

Well it’s funny, because I was working really hard, but it’s not like I was making money from it. Writing and recording isn’t profitable. All that work I put in, I just did it because that’s what I do for a living and I love music. And touring isn’t really profitable for us either. We’re still at a level where all of our money goes to paying our crew.

I did have a bit of rainy day money, and I do live at home, since touring means it doesn’t make sense for me to rent. For me it is a welcome break because I get to spend time at home, I get to be with my parents who I almost never get to see. I get to sleep in my own bed. I get to have privacy. It is all these things that on the road you just don’t get.

As for what it says about our culture, I don’t know, our culture is somewhat workaholic and it is kind of messed up that people depend on having that steady 9-5 to keep a paycheck coming. My heart goes out to all these people and places that can’t stay open because they have to pay rent. If people don’t have an income, I feel like there should be rent forgiveness.

Moving on to some music questions. The two new singles are great! You sing on the song “parachute” which is the first time you’ve sang on a Covet record. What made you decide this was the right time to include your voice in the band?

Everything I do and every decision I make is to benefit the song and the music. I won’t ever rule anything out. I feel like I was holding out on vocals for the longest time, because I don’t like when there’s a girl in the band and everybody just assumes she’s the singer. And those bands also get lumped into the genre of “female-fronted.” I always just wanted to avoid that, especially because I write all the music.

I didn’t want our band to be about who I am, I wanted to be about music, you know? For a long time I kept our music instrumental because I didn’t want people to immediately think, “There’s a girl in the band!” But now I decided I shouldn’t avoid something just because I’m scared of what we’ll be labeled as.

When I wrote the two songs with vocals on the record, I immediately had vocal lines for them. So I was like, “Why not?”

It is interesting to hear you talk about fear of being labeled as a singer, because you are such a virtuosic, once-in-a-generation guitar player. How much of the fear do you think relates to how women are treated in music? And how much of it relates to the way people sometimes use labels to pigeon hole certain bands?

Labeling is inevitable. Labels exist because people want a way to organize and understand things. It is easier to produce and distill something to its essential properties if it has a label. And it does have something to do with that, though it also really relates to a history of how women are perceived in the music industry. But I’ll be honest, I do feel like that [perception] is rapidly improving and I am super stoked about it.

The outro of “parachute” is incredibly beautiful. It’s in 4, but the way the drums are phrasing their part makes the section feel like it could be in an odd time signature. What were the conversations around the rhythmic feel of the outro?

Basically I come [to the band] with the songs 90% done. The ending of this song I had already put together, and then I came to my drummer, Forrest, and we decided how we wanted the drums to sound. He kind of does all the different phrasing, I let him go ham with that. Sometimes he’ll accent it in a really interesting way to trick people into thinking the groove isn’t in four.

One thing that’s stuck out to me about the two new singles is how complete the entire release process has been. With Covet, the music has always been amazing, but for this album, the production, the music videos, the rollout, the marketing…it all seems like a very complete package. Has it been different from your perspective?

This is the first time we’ve worked with a new manager, and I definitely wanted to give a full 100% effort for this release. It’s our first full length! For the music videos, we negotiate with our label about how many we can do and budget for them. Then how it works is I write out all the treatments and bring them to the video guy. We all brainstorm together and bang them out.

The more you do something the more you lock into a groove. Having a team plan out everything and keep a fire under your ass about rolling out new content is definitely helpful as well.

Last summer, I did an interview with guitarist Josh Martin from the band Little Tybee, who I know you’ve toured with. One of the things that surprised me is he talked a lot about the insecurity he had about his ability and how it sometimes leads to approaching music in an unhealthy manner. You’re a similarly virtuosic performer. Do you find you’re able to approach music healthily?

When I started out I definitely had something to prove because of my gender. I thought people would assume “Oh, they’re going to be this type of music.” So I was going to bust out my technical chops and show everyone I can play the guitar [laughs].

These days I feel like I’m really secure in my musical identity. I don’t identify as a virtuosic guitar player. I’m quite snobby really, and sometimes it takes me hours to play something the way I want it [to be played]. My real passion in music is good songwriting and telling a story with melody and textures. Once I realized that’s what I actually care about and I don’t care about technicality and proving myself, that’s been super liberating.

My background is in classical music. I used to do competitions and hate music and all the stress and pressure that came along with that world. When I picked up a guitar, I vowed to never make it a competitive thing. I feel like people try to make it competitive all the time by having articles like “Top 10 Shredders,” or this guitarist versus this guitarist. I always would rather make it collaborative instead of competitive.

People are going to complain about this album, that it isn’t technical enough, but do you really miss it? I think something that makes you feel something–feel anything–is much more important than being flashy. At least in my humble opinion.

OK last question. You’re an incredibly fashionable person both on and offstage. I just turned 25, and for all of my life I’ve pretty much been a jeans and a band t-shirt man. I’m trying to make my wardrobe more stylish and just a better reflection of who I am as a person. What advice would you give me?

Oh my god, I’m so passionate about this topic. The number one thing is don’t follow trends. Trends are bad because they encourage the fast fashion industry, which is really wasteful. Companies are popping out a very quick trend that isn’t going to last forever, people buy it and consume it, and then when it’s no longer in style, people throw it away.

I think fashion is awesome because it is an extension of your personality. It’s a way of telling someone about yourself without saying one word.