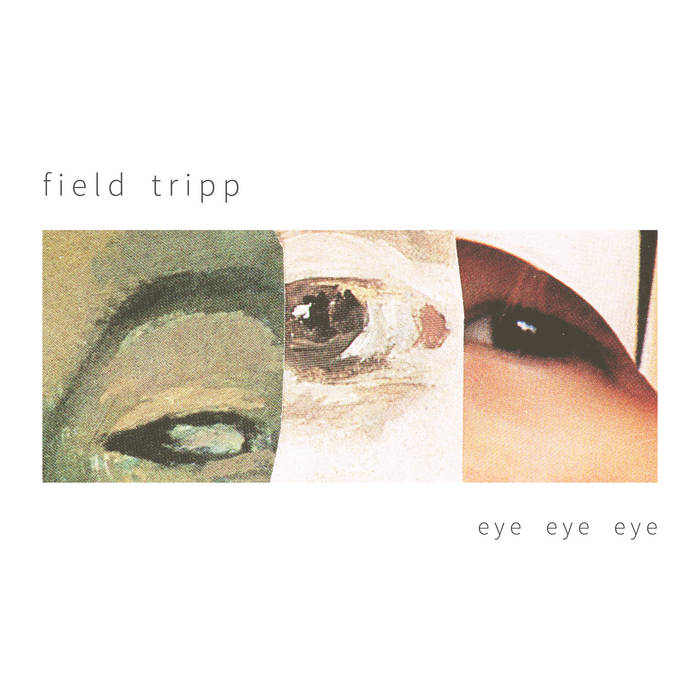 Field Tripp is the band of singer-songwriter Dan Tripp, who wrote and recorded the entire EP. While different musicians join the band for the Field Tripp live experience, Dan produces much of Field Tripp’s music himself. Dan’s tastes are pretty eclectic, and you can hear that in the context of his albums. Eye Eye Eye proves no different. While there is a general indie vibe to the music, Dan throws in Americana and folk along with a healthy dose of rocknroll and electronic elements into the mix on this new new collection.

The sound gets a funkier on “America.” A staccato bass line is filled in with bluesy electric guitar licks and some tasteful synth as well. Dan writes some pretty awesome lyrics and “America” has plenty. I feel like I could quote the whole song here so I’ll just have to let you hear it for yourself.

Eye Eye Eye starts to sound more experimental with “Right Here.” A drum machine and synthesizer is joined by reverberated guitar notes that bring out a true sense of calm to the track. The experimentation goes further with “Carpet Stain.” Shoegaze guitar combines with an electronica beat and other sound elements to bring a as-yet-unheard genre to the Field Tripp sound. On an album full of great lines, “You never change you carpet stain /All I can promise you is I won’t stay the same” ranks up there with the highest for me.

“Warner Bros” sends the album off in cheeky, Field Tripp fashion: “I don’t get along well with others/ I just got signed to Warner Brothers/ ‘Bout to change the dirty sheets and/ Let ’em lay down of fresh new beats with me.” There’s more of a country music element found here and I feel it fits the song’s theme well. All and all, Eye Eye Eye is another great record from Field Tripp and I’m glad new music is once again available from the band.

I wanted to find out more about Eye Eye Eye and what Dan Tripp has been up to these past few years so I contacted him with some questions and he was gracious enough to answer. Read the full interview below and make sure to check out Eye Eye Eye available now.

How have you been during this time of quarantine? Have you had any extra time to create at all or do you find yourself more focused on other things?

I’ve been well, staying at home suits me for the most part. I feel lucky to be able to continue working my day job from home. It’s given me time to attend to unfinished songs and brush up on my Jeopardy! app.

Your albums have always had a healthy dose of wry observational wit about society and Eye Eye Eye is no different. However, I feel like it’s been turned up a notch on this new release. Is this a fair assessment? Six years between releases can see a lot of change in a person, and certainly a whole lot has changed since then…

I wouldn’t that was premeditated… Maybe it’s kinda hard for me to avoid by nature. I don’t really feel like I’ve changed that much but I probably have. Maybe that means I’m getting old.

As the album was written and recorded by you, are you playing all the instrumentation on Eye Eye Eye as well?

Yeah, I ended up playing everything on this one, and I especially miss the songs being graced with backup vocals from Cassidy Hilgers, but she’ll be on future releases.

While electronic components have certainly been a part of the Field Tripp sound, songs like “Right Here” and especially “Carpet Stain” feel like they up the synth element in the alternative-indie-pop-rock mix of the band. Have you been experimenting more with creating this type of electronic music? What DAW do you use to produce your music?

I have been exploring sounds, making nasty bass synths, and other synth sounds… using an arpeggiator… maybe going for more beat-driven songs. Experimenting with the arpeggiator lead me to writing “Right Here” like it was just sitting there waiting for me. I like recording at home because it allows me the space and time to develop sounds and ideas to make a song like Carpet Stain and I end up getting to space that I haven’t been able to recording with a live band. I use Logic.

Like your last 3 EPs, Eye Eye Eye is a very punny title. At least it can be read that way. I can picture a big eye roll to go along with the album’s themes as you look at the world and exclaim, “Aye Yai Yai”… Apparently, there is no question here, just talk to me about the title. Do you pick them willy nilly on what sounds fun? Or is there something more?

I like that image you created there. There are three tracks that begin with “I” as the first word in the song… maybe just through repeated takes of saying “I” over and over it was just decided… and Eye Eye Eye is better than I I I … for lots of reasons.

In a video you posted online, you alluded to the fact that this may be the first of a few EPs that you plan on releasing in succession to one another, like how you did back in 2014. Would you care to divulge any additional information about these releases? Apparently Bob Hoag of Flying Blanket might be involved in this somehow?

Basically, I’m backlogged. I have piles of home recorded songs that I’ve been able to separate into three piles, the first pile is Eye Eye Eye, the second two are different sounding; one feels more traditional rock sound and the other is misc.

I’ve recorded the majority of a more polished full length album at Flying Blanket and if things go well, I’ll be able to release it by next year, it’s been a blast to record the 8 songs we have so far.

I really enjoy the cover of this album as well. Did you design it? I keep trying to pinpoint the painting the eye on the left is from but I just can’t seem to get it…

Thanks, I like it too. I’m not sure what that painting is either! The cover was designed by Linden Eller. She does some really cool collage work. I gave her a rough idea and I was really stoked with what she came up with.

I know things are still pretty up in the air right now but do you have any plans on playing live any time soon? How have you been trying to connect with fans to let them know about this new release?

Man, I miss gigging. In Field Tripp’s absence I was staying busy with [Snake! Snake!] Snakes! and The Breakup Society and other side projects. Connecting with fans has never been a big strength for me; mostly just gigging and social media. I hired my dog as an agent but he hasn’t done shit. I’ve also been going to street corners and shouting the news until police ask me to leave.

That last Field Tripp release was back in 2014. Was there a reason for the pause? Or was there no pause and you just wanted to put time into the next recording effort?

The plan was to record a full length and release but it didn’t work out that way, though I’m really happy with what we have so far. For a while I used that as an excuse to wait to release anything else, then go back and record more but not get it done. All the while I continued to write and record at home, have FT practice, and rehearse/gig with other bands. It was just time to get new music out there and it feels good to do so after so long.

What sort of things are you working on outside of music? Or have you been intently focused on music making?

A few years ago I took a more demanding job in mental health. Before, I was working part time and spending more time playing music. I love my job though and it’s been an inspiration to me. I also became a big Swiss Army Knife nerd, started a YouTube channel solely dedicated to Swiss Army Knives. Yep.

Is there anything about Field Tripp or Eye Eye Eye that I didn’t ask that you would like our readers to know?

Any mistakes you may hear in the instrumentation or production of this record are purely intentional.