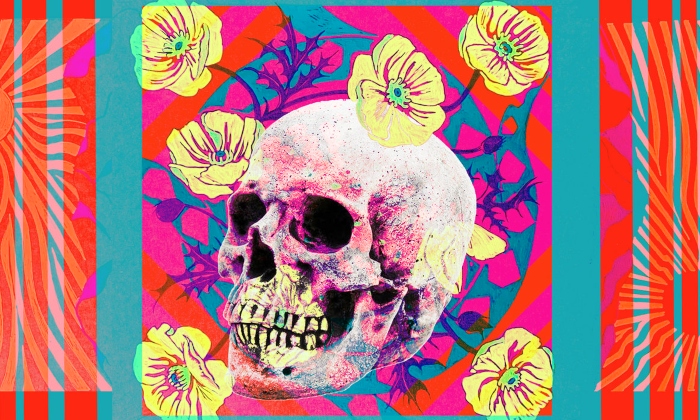 Tucson’s Louise Le Hir released a two track single and I couldn’t be more excited. Well, I couldn’t be more excited unless someone was to tell me this single was in prelude to a full length album lurking somewhere on the not-too-distant horizon… just sayin. Louise Le Hir mixes up a 1960s psych rock vibe with some French pop feels on “End Slowly” – the first track on this two-song single. And make sure you hang around after “End Slowly” to heard the B-side track, “Cosmic Love Song #23.” Louise Le Hir brings some alt-country crooner for a more desert psych feel. Both songs are gems and both can be heard over at Bandcamp so get on it.

Galapaghost is the solo endeavor of Austin-based indie artist Casey Chandler. The prolific songwriter released his seventh album back in March and “Siralia” is the title track from that release. Chandler wrote the song in the wake of the sudden loss of his father. In addresses his grief, he began meditating to build a sense of calm against the onslaught of stress and anxiety. That sense of grief can be felt in the verse of “Siralia” before the uplifting calm of the chorus sweeps in to give the listener a sense of serenity. Thus, the track continues, moving from one feeling to the other, just like the waves of depression rise and then recede. Galapaghost’s indie style reminds me a bit of James Blake with its dreamlike vocals rising out of pools of sound. Check out “Siralia” here and then dive into the album of the same name from Galapaghost.

Get ready to run your heart through the ringer when you hit play on “No One.” This alt-pop track from Canadian NeoSoul artist Ngoni cites influences like 60s R&B and “Bond music” as well as lo-pop and you call hear all those things swirling around in this bittersweet brew. The instrumentation on “No One” is kept minimal as the song comes in on Ngoni’s remarkable voice; unique and emotive in the quiet and constrained way I think of Billie Holiday (or Billie Eilish). “No One” has all the anguish you want from a song about a love gone wrong. Personally, I hope Ngoni lands the next Bond theme song. In the meantime, enjoy “No One” by Ngoni here or

“Trick of the Light”

The L.A.-based band known as The Warbels recently released their debut album, Trick of the Light, and you can check out the title track from that release right here. “Trick of the Light” addresses the very topical issue of modern mass misdirection through constant direction. The sibling duo behind The Warbels set an inspiring indie sound in juxtaposition to this subversive message about the world we live in and the effect will add some resilience to your spirit. Sorta like that knowing glance exchanged between two strangers who both feel the uncomfortable moment in the room. “Trick of the Light” ignites that same spark. Fans of Tame Impala will appreciate the harmonic alt-rock and carefully constructed soundscape while the vocal harmonies ride the wave.

Year of the Tiger

This SoCal indie rock duo are bringing the good feelings of summer straight through the clouds of COVID to your door and I think we could all use just a moment of sunshine. “Mannequin” is a nostalgia-tinged garage rock anthem full of surfy sounds and raucus energy that will call to mind Big Gulps slurped on sidewalks, homemade denim cutoffs, scrounging change for movie money and everything else I never thought I’d miss or even think about again. “Mannequin” comes to us from the band’s debut album, One, which I suggest you check out. Year of the Tiger is not only talented, but extremely versatile and each track gives you a little something different. Personally, I was partial to the buoyant punk-slant of “Mannequin” but maybe you’ll like something a little more mellow. You won’t know until you dive in.