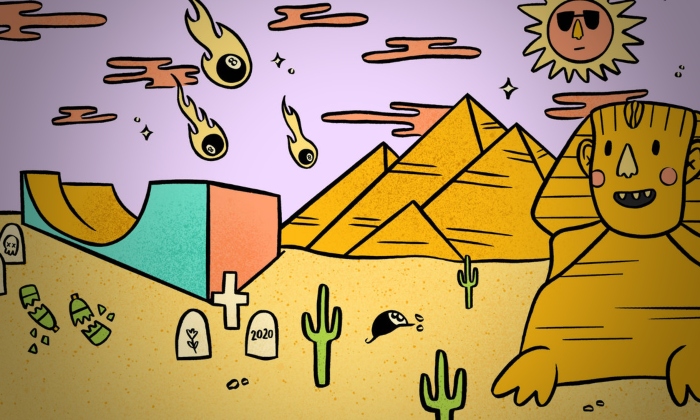 Austin Cooper’s reputation for pulling pranks on bandmates is perhaps only superseded by commitment to cutting-edge music-making. As the central force behind No Lungs, Cooper has been shaping out a unique sound that is one part industrial, one part alt-rock, two parts emo, and enough punk energy to tie it all together. If that sounds like a sound that might be hard to wrangle, I would agree with you and No Lungs has been finely tuning it since their inception. The band’s latest single, “At Metro Square,” comes to us from their forthcoming album, What You Didn’t Want to Happen Is Happening Right Now, and it’s their best song to date. In fact, I would argue that this single marks a huge leap forward in the No Lungs sound. And the string of singles No Lungs have been slowly dropping like breadcrumbs since last October promises that this new LP is going to be a big deal. Or, at least, it should be a big deal. What You Didn’t Want to Happen Is Happening Right Now comes out in September but you can land your pre-order right now for only a dollar (and you should). Do it.

You never know when Closet Goth is going to drop a single, or three, on their fans. Well, this past month, the Phoenix noise rock act dropped three new tracks, including this lively instrumental called “Love Song For David.” We don’t often feature instrumental-only tracks, but Closet Goth has such a strong sense of narrative within their track construction, I don’t even notice that words aren’t included. I’m a verbal-verbal person, but the music is so compelling I move straight through the song and my only regret is that it isn’t longer. After diving into “Love Song For David,” I suggest looking into all the new hits from Closet Goth. The post-rock “Capitalism Is The Reason”  and the moodily aggressive “They Live” join “Love Song For David” to complete this trifecta of June releases. The sales yielded from each track go to support a different good cause and you know how we love good music for a good cause.

This femme-tastic four-piece from Dublin bring their garage rock sound from their back garden shed all the way to our dusty desert with their new track, “The Cheek.” The energy here is raw and raucous as the band tears into the topic of sexuality, both the personal expression of and the world’s response to, and the trauma that can occur when those two interact. Sprints fuels their post-punk angst with no shortage of frustrations at the unsolicited advances and instances of sexual assault experienced by the band’s lead singer and guitarist, Karla, who identifies as bisexual. “Whether it’s being told I wouldn’t have been kissed did they know I was bi, or being asked would I do a threesome, having your ass grabbed and your space invaded – this is my big fuck you to all those people.” And “The Cheek” has the right amount of charge for a ferocious fuck you.  Give it a listen.

This quartet from Tucson released their debut EP, The Worst Day, on February 7th of this year just before every day became The Worst Day. Is the apocalyptic change the fault of Annie Jump Canyon? Probably not. Did they predict the oncoming destruction? Definitely kinda. But they also provided us a rowdy soundtrack to help us over the hurdles of 2020. “I Felt Like Funky Blue the Dinosaur” is less about dinosaurs than it is about lost love. The band has an emo-tinged pop punk feel to their indie rock sound. The angst level is high and the energy unrelenting. Check out “I Felt Like Funky Blue the Dinosaur” and then continue onto the complete EP to help you through the general malaise of the days.

You can’t bring someone down when their already down, right? Maybe? Love Like Fiction doesn’t seem to be slowing down just because the world is beset by pandemic and I’m guessing that’s because there’s a bit of emo spirit that seems to live on in them. “Misery Maintenance” helps to support this theory. Love Like Fiction sounds like they know the terrain of being down so well they could draw others a road map to feeling better and, once they’re ready to embark upon the journey, they will. But the mood and the musicianship on “Misery Maintenance” is ultimately uplifting as the pop punk that powers it. Make sure you give this track from Love Like Fiction a listen.