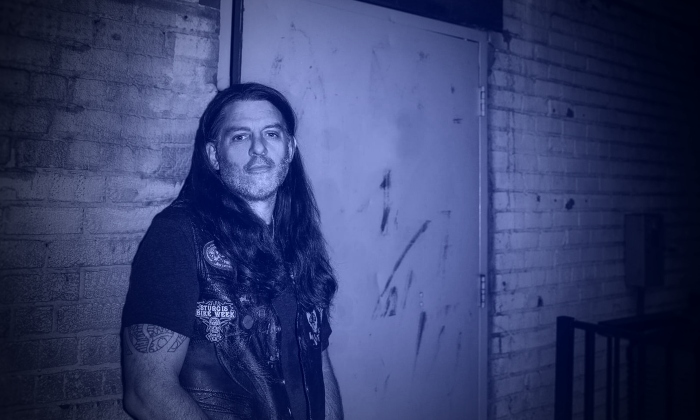 Ryan B. Clark is a novelist, blogger, co-founder of Hookworm Records, and notorious music fan originally from Tucson and currently based out the Phoenix area… with some road stops between there and here. Clark’s love of Arizona music also has made him a tireless scene supporter and you can check out his regular Spotify playlists featuring artists from the area. So, of course, we had to ask him to assemble his Tastemaker’s Ten to share the 10 songs he thinks everyone should hear! And now you can too!

Some introductory comments. I love music. I love literature. I love poetry. I love writing. In my world, all of those are really just facets of the same thing. For three years, on Keep the Greasy Side Down, I have been bringing consistent content, using my free time to throw myself at my passions. It is with absolute gratitude and awe that what I have to say has proven to resonate with some folks. For this list, I focused on one precise question. What songs molded that voice that you hear in my writing? What songs created the stage that those thoughts dance on? I have mixed a few local favorites in to showcase how that stage has evolved over time. – Ryan B. Clark

Joy Division formed the core of my entire Post-Punk, Post industrial, modern decay perspective on progress. Something in the decadence of the 80s showed a line forward to isolation. I think in retrospect, Joy Division is irrefutable as prophetic in what not only became the Post Punk sound, throwing the doors wide open to possibility, but it also used that vehicle to shine an intense light on progress in general.

Confession. I came to David Bowie very late. I did not become a super fan until I saw the White Duke perform with Nine Inch Nails on the Outside tour. And I never looked back. But, in truth, Bauhaus introduced me to David.

Honestly, I could choose any number of Rush songs. Peart’s lyrics speak to me on almost every single level. I was mostly torn between “Far Cry”, “New World Man”, and this one. I chose this one though, because of my original focus. I am trying to give you a sense of what created the stage your music plays on. For me then… a song that defines the loneliness of being a misfit in a suburban world was just too true.

When I finally arrived in the Valley of the Sun, I had missed Gin Blossoms. They had exploded and were gone. I started going to a place on main called The Electric Ballroom… and these guys used to play there a lot, and sometimes they would shoot pool. And I was there. Shy. Didn’t talk much. I just soaked it all in. It took twenty years to start writing about it. So, local or not… it is impossible for me to ignore the OG Refreshments.

I Don’t Konform
“Hungry for War”

One of my early interviews was a metal group from Window Rock, that somehow got to Denmark to make a record with the great Flemming Rassmussen, of Metallica Golden Years fame. And Kyle Felter became one of my good friends. For me, I do like hard music, but modern rage metal, sung by angry white boys, just does not make sense. What are you so angry about? In the 80s hard music raging against the Reagan machine made sense. But now? I have a hard time with the crowd that that music draws. BUT. Native Americans, singing about being Sagebrush rejects and a life of resistance that their white counterparts have really no way of understanding? Yeah, that rage makes sense. That is rage with a purpose. And I am all about that as long as the purpose is… good.

It was hard to allow local music onto this list. I don’t want to spurn folks, and I do not want to be redundant. I already do Church of Rock, after all. But… there are a few songs locally that have marked mile stones in my evolution as a professional. This song is one of them. This album is one of them. Because it is Raw. Honest. And intensely personal. And it pulls ZERO punches. That will move me all day long. And I have to learn to let it go too….. everyday.

I write books. I have a third book in my Speculative Arizona Series. It will be out most likely by the Fall of 2021. It will take my supernatural spin into the Spirit World of Arizona. It is intense. It is personal. It is an awakening. So is this. My partner Kevin Michael Prier introduced me to this song after an incredibly wonderful conversation one night where we realized we had been sharing a similar path for a very long time without even knowing each other. We have become brothers in music. This song kinda SHOWS why.

And yes. The Black Moods. Why? Because this video is amazing. These guys work harder than anyone I know. And these guys have never treated me like the new comer little guy. And because in this world, and in my personal one, we always need some Dragonflies and Sunshine to chase away the storm. Respect.