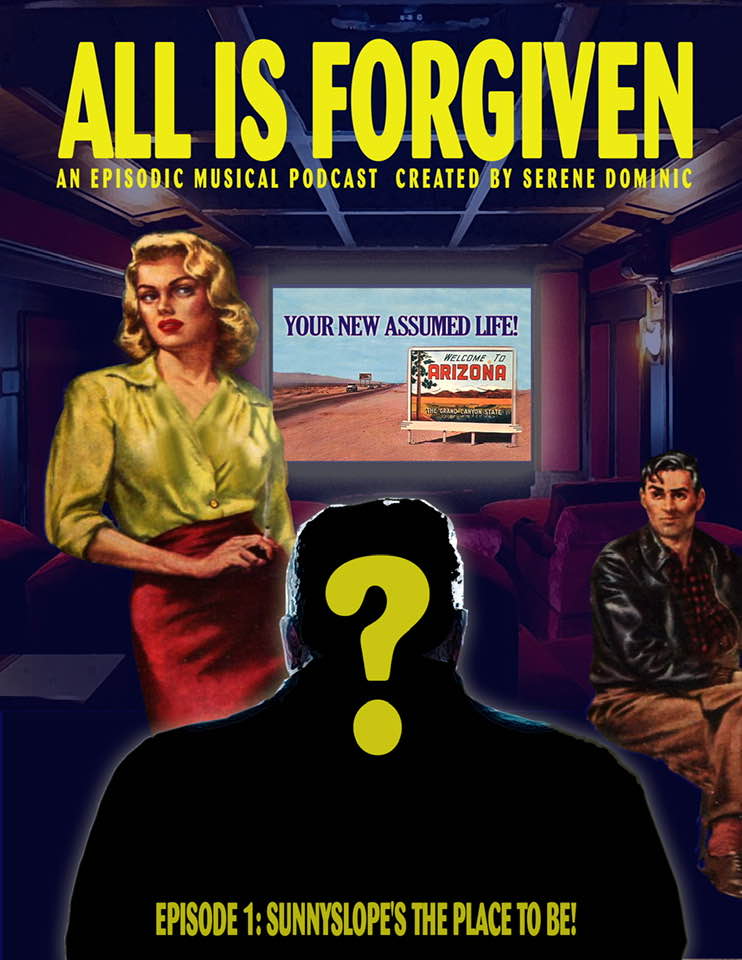 Few can match the creative output of Serene Dominic. A musician and writer, Dominic has now added podcasting to his ever-growing body of work with All Is Forgiven?, the musical. The narrative tells the tale of a mob foot soldier who finds himself making the jump from the Bronx to Sunnyslope, Arizona after entering the Witness Protection Program. On top of all this, he still manages to find time to perform a livecast as The Human Torch from home every every Thursday night [8PM MST]. I had a chance to chat with Serene D himself about All Is Forgiven?, the making of the show, and what’s next for the mastermind behind this project and others…

YabYum: So can you tell me about the inspiration behind the story for All Is Forgiven?

Serene Dominic: It’s partially based on my feelings of displacement moving from New York when my job moved here in the early 90s. It happened to run parallel with Sammy the Bull being under the witness protection program. So when I would see his name in the news I would wonder if maybe he was missing sfogliatelles and Stella D’oro Cookies also. Everybody in this little pageant is trying to get home and secretly maybe I was thinking that, that my Sicilian blood was bubbling in this three digit heat like maybe I really still don’t belong here. It was a delayed reaction after the years of culture shock wore off. But even New York misses New York now so I guess it doesn’t matter.

I believe I gleaned somewhere that this story is somewhat based on real life events. How somewhat?

It’s really not based on any real events. I loosely based some of it on Sammy the Bull’s trajectory but it’s not a celebration of his brutal life or anybody’s. I made my mob guy a singer who was a failure in the crime world on account of being too goodhearted. And I made him a singer because, well, it’s also a musical.

I know you’ve written musicals for the stage. What made you decide to create a musical podcast?

Well partially because I liked your noir podcast and partially because it costs nothing to put together a musical podcast and I could control every aspect of it, be a novice director, with the minimal amount of embarrassment and virtually no outside effort beyond recording the actors. Last spring we were going to do a new staging of Dark Lullaby, my previous musical and when that fell through because of people’s availability, this idea seemed a lot more appealing. No one’s ever done it and now I know why no one’s ever done this before. But I would still do it this way and as a matter of record, we’re going to do Dark Lullaby as season two of something we’ll call Onus Playhouse.

Tell us about the casting process for All Is Forgiven?. Did you work with people you’ve worked with before on musicals? Or did you hold auditions?

Some people like Joobs and Ernesto Moncada I’d worked with before. Id’ seen Dayna Donovan in other productions so I knew what she could bring into the piece. Mostly there’s a lot of wild card selections. I put all the guys in San Jacinto Prison Band because I thought their voices would work. Without having to stage it, everyone was up for it and we found that all the guys were closet thespians. I put out feelers and got people like Kristen Saggau who did a pop up art gallery called Bazaarcar a few years ago and Annamarie Sanchez who runs Antique Sugar and everyone amazed me with their talent.

Your background in music seems pretty crucial for pulling off a musical podcast. What came first for you. The songs or the story?

I think the outline of a story, then the songs come and you shoehorn them into the production as needed. There’s a reason we don’t refer to Elvis’ movies as classic musicals. After the first four movies the songs stink and the plot is pretty much a way of stringing 12 stinky songs together. A musical has to at least seem like it’s a good story but the songs oughta’ be able to work as standalone songs. I think most of them do , but I do have a few songs that are situational. I don’t think I would have had a song called “French Provincial Kick” if I didn’t have a scene that needed a song. If you enjoy writing songs, it’s a nice little problem to have. “OK Elvis , you’re in a room with a lot of French Provincial furniture, sing about your momma!”

Who aided in the construction of the soundtrack? I’m assuming you did a lot of the production work yourself.

Steve Asetta, who is in Moonlight Magic and San Jacinto Prison Band co-produced it with me. He got into orchestration on the outset of this and his scores on “Ode to a Screaming Jay” and “How Did I Become Such a Monster” are really evocative. Some I had originally built up recordings with a lot of orchestral samples and let him loose on those songs first. He’s already starting on incidental themes for Dark Lullaby. That’ll have a lot of noir movie cues.

How has podcasting differed from some of your previous artistic endeavors?

The amount of control you can exert over every aspect is what makes it different. At some point I have read every line out loud and recorded every line before replacing it with the actors who really bring the thing to life. And to have Peter Gilstrap, who was the music editor of New Times and brought me on board there and launched me into a writing career, to have him narrating was personally a high point. And he has a great voice. I asked him if he could read it like an agitated Bill Kurtis and by gum he did.

Did the pandemic present some extra challenges to the production?

Towards the end, it did. But really this production was pandemic proof. We’d recorded most of it before January. There are things I wanted to redo that I had to let stay as is and edit with what I had to work with. Originally we were supposed to have Dayna sing all her numbers but she had bronchitis, this was pre-corona so I brought on Jude Jehad to sing three of the character’s four songs. And that was awesome. And on the remaining one which I needed Dayna to rap, we were self-distancing by then so we just recorded her part over the phone!

Do you have a first or favorite love? Songwriting? Storytelling? Or is it just one big creative process? I ask because I play favorites with everything.

It’s always going to be the songs first for me but I like conceptual packaging the whole thing too. With All is Forgiven? I got to design art for every episode based on preexisting pulp novel art. I know nobody cares about albums anymore and people say you’re a fool for making them because there’s no audience who will sit down for a whole CD or album but maybe they’ll take 3 songs and a few scenes to go along with them. And maybe when they’ve digested the whole thing they’ll want to hear them in one bundle.

Any ideas swirling around in the Salerno creative brainspace about what’s coming next?

After Dark Lullaby, the podcast, maybe we’ll do a story with less songs. Or no songs. And maybe I won’t be as excited. Really I would love for someone with a solid story [to] tell me I need to plug in seven or eight songs. I would be happy to just do that. And I like writing dialogue but hate trying to work in the save the cat beat sheet storytelling beats. I can write dialogue by the yard, but you have to end at some point . “People want to get on with their lives, can you cut this pretend conversation down to a page?”

Dark Lullaby was almost two hours but we shortened it to 80 minutes by eliminating the second verse of every song . The podcast format let’s you keep all that minutia in. And then you have to structure it to be a cliffhanger at the end of every episode.