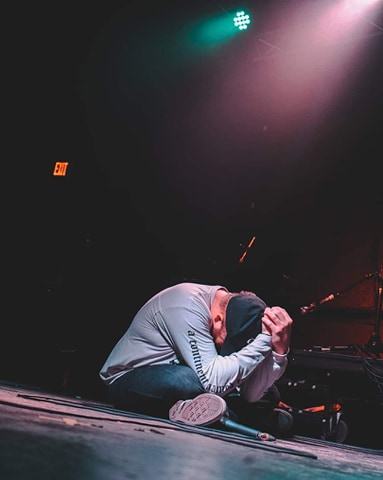 I am The God Samaritan, but my friends call me Cody. I’m a gloom rap artist hailing from the deserts of Arizona, bringing my own personal brand of despair to the masses.

I like to say that I play the dictionary. I rap, sing, and recite poetry, but everything I do is rooted in bending words to fit my vision through imagery, entendre, allegory, and alliteration. I’m also a backseat producer, meaning I sit inside studios while my beats are being produced telling much more knowledgable people than me how to do their job. They love it.

My dad is a country singer-songwriter, so my musical genesis is deeply rooted in wanting to be as cool as he was. An affinity for hip hop at a young age and my knack for poetry led to me making spoken word music under Good Samaritan, which eventually evolved into the fully realized hip hop project you see today.

Oh, that’s a hard question. If I had to pick one, it would probably be the last one I played under my old name. I had taken a long break from music, and decided to “kill” the Good Samaritan with a headlining slot at the Desert Grey Music Festival when I came back. No one quite knew what that meant, but the air of finality brought an incredible energy to the performance that was surreal. I cried, the crowd cried, people practically begged me to keep making music. It was a whole lot of hoopla for removing an “O” from my name.

Pie in the sky, I would love to perform with Frank Ocean, Childish Gambino, and Sadistik at the Van Buren. Realistically, a show with HOLY FAWN, Sadistik, and Dropout Kings would be the highlight of my life.

I’ve reverted back to a lot of music from my childhood/teenage years. Nostalgia has become sort of a baby blanket for me to get through this. A lot of Jay-Z, Nas, Lupe Fiasco, early Childish Gambino/Kanye/Frank Ocean, and 2000s pop rock. Sadistik and Phoebe Bridgers never really leave my rotation, so a lot of those two as well.

I actually just finished my first run through of Avatar: The Last Airbender. It was PHENOMENAL. Lil Dicky’s Dave was also surprisingly excellent. I usually have one of my favorite anime on repeat, and right now that is Hunter x Hunter.

What else are you doing with these extra hours at home? Extra creative time

I have a little bit too much creative time at the moment, if there is such a thing. I was getting ready to go into the studio to record an album before this started, which has evolved into four EPs and a couple of singles. I’m doing my best to get into a routine of self-care that will carry over when the world starts back up again. Deep cleaning, meditation, exercise, general adulting activities I usually put off. Also playing a lot of Dungeons and Dragons online. A lot. Too much.

If you could Facetime/Skype/Zoom anyone in the world for an extended convo right now, who would it be?

A conversation with Donald Glover would be a dream come true for me. I’ve been a die-hard fan of his since the “Freaks and Geeks”/Community era. Seeing him grow into an A-list superstar has been a pleasure to watch, through all the twists and turns. Pretty sure I could convince him to get that Community movie off the ground if I had enough time. #SixSeasonsAndAMovie

Sam Etling from Sore Eyes and I have been discussing a project for a while that I’m finally buckling down on. I don’t want to spoil anything, but I think you all know what happens when two insanely talented/sad best friends. collaborate… Magic. Magic happens.

You can find me on all the music streaming services under The God Samaritan! I’m also on the social medias @thegodsamaritan. Streaming and following me on Spotify would be the easiest way to support me, but I also just released some merch if you want to support my crippling DnD dice addiction.