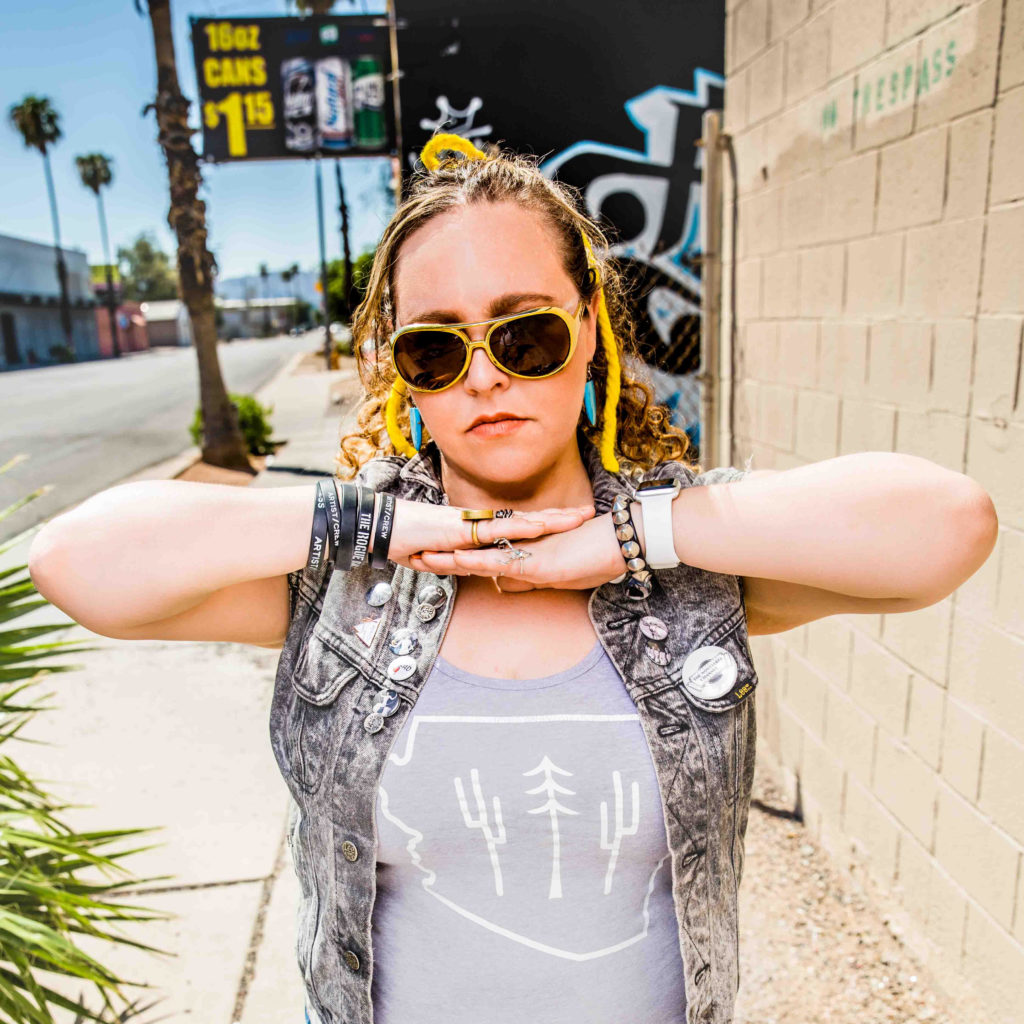 Anamieke Quinn. I perform as a solo artist, front the rock band Treasurefruit and am one of the ladies in Las Chollas Peligrosas. On rare occasion, the Sara McAllister Duo too.

I play acoustic and electric guitars, upright bass and sing. Also I play and teach piano.

Came from a musical family, had to take piano at 5, did band/orchestra in school, started writing songs as a tween and have been a vinyl lover all my life. Used to try to climb on stage with my mom’s band as a little kid and eventually did my own thing once I had a few tunes to share, thanks to a steady diet of Beatles and Beach Boys and early doo-wop and Motown classics that made me want to write and sing.

Tough one. Probably the time I played with Phish in front of a bajillion people at the legendary “Vegas ’96” show. We were the yodeling cowgirls joined by the Nitty Gritty Dirt Band’s John McCuen. M3F on the main stage was pretty epic with Treasurefruit, and as a solo artist I will always be so honored to have performed for the last Lit Lounge event at SMOCA with carefully selected originals (big thanks to Tania Katan for inviting me).

Definitely the sunset slot at Coachella, sandwiched between G. Love, Jack White, Kasabian, Eagles of Death Metal and Queens of the Stone Age. That would my ultimate jam, with some Jamiroquai afterward so we can all get down.

I’ve been really really obsessed with the Crosby, Stills and Nash song “You Don’t Have To Cry” and the rest of that whole album, but mainly that one song. I go between that and the Cut Copy Haiku From Zero album. When I’m in the garden, it’s G. Love’s Electric Mile album for days. We went through a pretty heavy Wang Chung phase too.

I’m the reference book queen, so lots of stuff on parenting, gardening, cooking, writing screenplays, copyright law, how to read tea leaves and do manicures…you know, the important stuff. Will probably read Kitchen Confidential again soon to remember a more visceral world of days gone by.

Other than our very important doses of John Oliver, The Daily Show and SNL, we’ve been catching up on favorite Scottish comedy like Burnistoun, Limmy’s Show and Still Game. When it’s time for a feature-length vibe we always turn to the Criterion/TCM fare where I’ve been hooked on crime dramas from the 30’s and film noir classics. I have a time-travel crush on James Cagney.

Faced with mortality awareness and zero events on the calendar, been finally cataloguing my catalogue and confronting the camera. Got a vast amount of buried songs, only played live here and there. Keep thinking “what if I incur the worst case scenario with this whole virus thing,” better get them all out there sooner than later.

So, I’ve started just chipping away at the list, recording garden videos (mostly in paired themes), showing the wide array of my styles tied together by my equally varied sunglass collection “united shades” (cheeky, I know). A couple twangy train songs, some jazzy numbers, Latin inspired songs, some edgy rock anthems, some pop stuff, some reggae and funk vibes, maybe even some covers I love to play.

The highlight so far is a brand new tune I juuuuust wrote about what’s happening right now (rare) and am super extra-stoked about it. It’s called “Time Is On My Side” and is in a weird time signature because why not. Working on a few more new songs too.

Also embarking on remote studio collabs with some pals for new projects, and finally tackling some video treatments for some vault tracks.

I’d probably FaceTime with Trevor Noah, try and pitch Las Chollas going on to sing my political song “Stand Up” (from our forthcoming album) and talk about some of our causes.

It’s not rocket science but my taco game has been pretty on-point lately, with lots of veggies from the garden and this wicked homemade cashew-achiote sauce.

Yes! Got a collection of moonbeam songs that want a tender treatment. Reconnected with our original guitarist Matt Ventre for a new project called Opera Lovers, an acoustic duo of folky and intimate stuff. Really excited about that.

Also started a fun side-project with my drummer Ehren a couple Sideponies ago called Tariff-By-The-Sea with a shipwrecked-aristocrat/nautical theme, Islandy Yacht Jazz, if you will. So keep an eye out for more of that eventually.

Basically replaced live gigs with these video offerings at the moment, and have some virtual tip jars in action for those interested/able. Did a few campaigns to help raise funds for the Nat’l Suicide Prevention Hotline too, which is super important right about now. We are streaming on all the platforms, pay-what-you-want on Bandcamp. Actual money is incredibly amazing, but mostly hoping people will listen and share and subscribe to our YouTube channel.