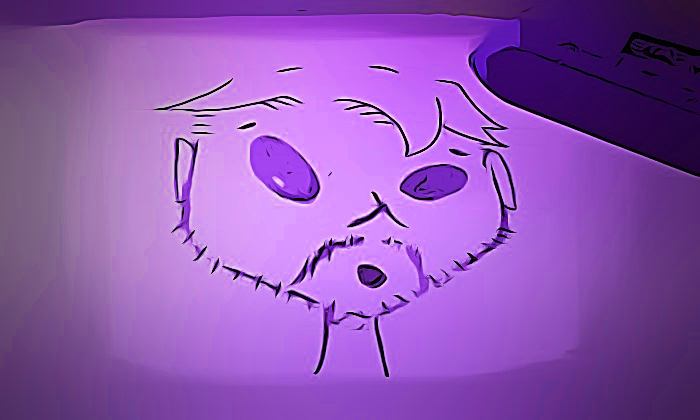 Today The Lonesome Wilderness premiere their new video for the song “Webs”, off their stellar 2020 Awake in The Night release.

We’re certainly interested in how bands approach the medium of music videos these days as, after all, not every new video can look like a Zoom call.  So we were super excited to witness some awesome animation for “Webs”.

Not only can you check out the new video below, bassist and back-up vocalist Andrea Golfen answered some questions we had about “Webs” as well. Director Roland Wakefield was also able to share his process of creating the music video as well…

YabYum: The animation in this video is great. I love the combination of sketches and stop animation. How did you come to work with Roland Wakefield?

Andrea Golfen: Roland approached us after he fell in love with the track “Tropicana” off our first EP. He wanted to make a video for us and had a whole concept worked up already. That was our first collaboration with him and it worked swimmingly! He also made a video for “Stay out of the Sun” from our second EP and it was super.

This time around, he had a concept worked up for “Webs” and when he showed us a draft we told him to go for it. We really like his creative direction and ideas seem to just spring from his mind. His execution has a simplicity and attention to detail that’s just amazing. The easiest way to work with him has been to just follow his direction and watch the magic unfold.

Was the concept behind the video something Roland Wakefield worked up or something the band brought to him?

Andrea: The concept here was completely Roland’s baby. He sent us a mock-up and we told him to roll with it.

Roland Wakefield: “Joe said, “Hey, you got any ideas?” I said, “Yeah! You guys wanna show up and be in it?” Then, Joe said, “Nope,” which was totally fair. So I figured if I can’t shoot the band I would make the band and animate at angles I would shoot at a show.

When South Park first came out me and my friends animated our own episodes with construction paper, a bunch of mouths we cut out and a VHS camera that we would use like it was a frame by frame film camera, which it was not. It worked out and I’ve always wanted to try and do it better and see what it looked like. That was this video. It’s more of a stop motion video than an animated video. But every technique possible is buried in this video somewhere. A couple of shots are basically just moving pop-up books. The only real computer effect in the whole video is a couple of split screens you can’t even see.

I also didn’t have a physical copy of the CD, so that’s where the iPod and the computer wallpaper came in. It was a way to show the song and album throughout so the band was represented in the video in a way you would connect with when you see them live or stalk them online, which I recommend.

I had just read a Wes Anderson book and was thinking about a lot of his 90 degree whip pans that go back and forth between characters. So I tried to figure that out going back and forth between the desk and the drawings or the iPod being turned on. Also, a lot of Edgar Wright style whip pans for cuts. Every time there’s a drawing being made I tried to turn it into a Shaun of the Dead superhero suit up montage.

After shooting the video I realized the last minute of the song gets really distorted and psychedelic, which meant that I couldn’t edit the animated playing to it. It didn’t flow well. I had just watched Lifeforce and they broke down how they did the special FX for the light beams of the ghost/alien/vampire/soul things. I had the last shots of the video done (Joe stepping out of the paper like Baby Groot) so I tied it together with the idea that the song is coming out of the iPod and bringing the drawings to life.

In a similar way to Lifeforce and Ghostbusters, I basically reflected LED lights off of a plastic sheet in front of the camera. They had Mylar, lasers and an optical printer. I had a stage light and overhead dry-erase sheet from an old high school projector. But it worked.

I also really wanted to have an excuse to draw a robot on my light switch and not feel weird.

This is the second single from your album, Awake in the Night, which came out earlier this year. I revisited the interview our (other) editor, Mark, did with you at the time of the album release. Did the pandemic prove disruptive to your promotional plans? Seems like you had some shows planned, both near and afar.

Andrea: We are definitely bummed that our shows and summer tour are cancelled. We were really looking forward to playing out with all of our new songs, but public health is more important than our record. Thankfully, everyone in the band has their health and we’ll get back to shows and touring as soon as it’s safe. In the meantime, it’s been really great to have some song-writing time and space to work on this video with Roland.

Half the band became new parents during the make of Awake in the Night. Now, be honest here, has the child robbed you of the time or will to make music?

Andrea: The child has been quite a delight, and rather than robbing me of time, he’s made me more intentional with how I use my free time. Looking back, it’s incredible how much free time that I used to have, but I wasn’t doing a whole lot with it. Now I focus my time on what I really love, which is making music, cooking, riding bicycles, and (up until ~9 weeks ago) playing and listening to live music.

Does the band still find ways to practice in this time of social distance?

Andrea: We haven’t found a way to practice at a distance yet. We’ve chatted a bit about covers we’d like to try and Joe is busy writing about a gajillion new songs. What I’ve heard so far is fantastic, so I can’t wait to work on lyrics with him and work up some bass lines. Joe just ordered some new recording equipment, so we will hopefully get to share some raw tracks with Paul and Brian so they can jam and we’ll collaborate when we can get back together.

What are you folx working on at present? Plans for new music videos? Writing new songs? Or laying low and focusing on family? Maybe gardening?

Andrea: Joe and I are plant murderers, so not much gardening here. Hanging with a 2-year-old is a pretty awesome quarantine diversion, so that takes up a lot of our time. We have Zoom happy hours with friends and we’ve been trying our best to support our local restaurants and breweries with curbside/take-away on occasion. Like I mentioned before, Joe is busy writing new songs. A lot of them have kind of a lonely feeling so far.