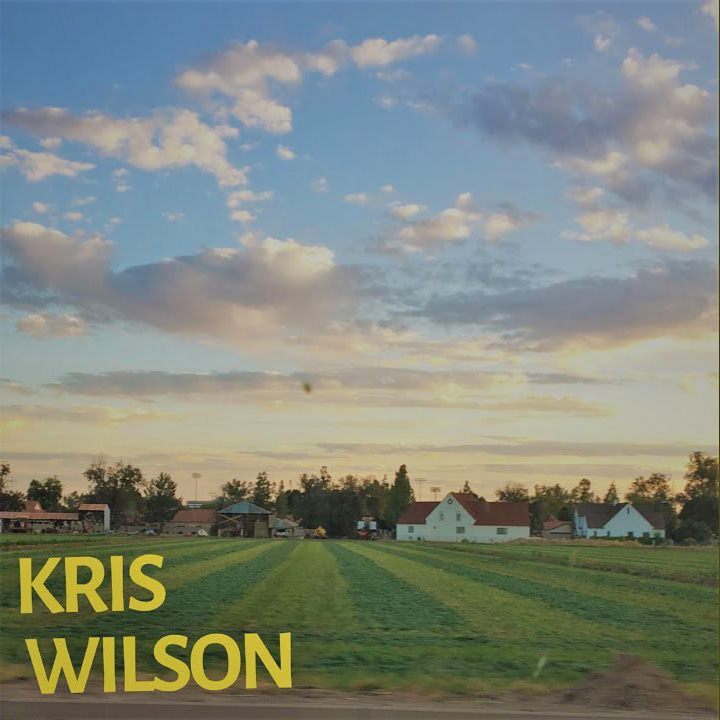 And, I’ll be honest, that’s not something that’s very easy to do anymore. Thanks to YabYum, I easily listen to 50-150 songs a day (on weekdays). The hardest part of listening to new music for myself (or anyone I feel like) is it’s ability to grab you while still in unfamiliar territory. The magic that happens between that first listen and banging it in the car for the umpteenth thousandth time, screaming all the words with the speakers blaring, is what every music junkie longs for. How do you quickly close the distance between new song and new favorite?

You might recognize Wilson as the lead singer/guitarist of Valley-based band Blu Joy. The first time I saw that band was in the basement at Trunk Space and the connection was instant that time too. Something about the nonchalance and laid back vibe the trio emanated as they rocked their set just caught me. I’ve been a fan since.

So when I heard that Kris had released a new EP of music, not under the Blu Joy moniker, I had to check it out. And, while the songwriting is still very much in Mr. Wilson’s familiar style, there’s a mark of maturation in sound here.

Opener “Slow Rockin'” sounds like an Elton John or Three Dog Night B-side, the steady piano leading the driving beat. Wilson expounds on themes of growing older while maintaining one’s self-identity. While the hook is catchy, lyrically and sonically, it’s the “mmm-hmm-hmms” breaking-up each verse that really get me singing along.

Overdubbed lead vocals and an acoustic guitar begin “Best Friends,” an upbeat garage pop song that gets right to the point and clocks in as the shortest song on the EP. “3-6-5” is just an old-fashioned love song, with Kris’s touch of modern sensibility, of course. “Honey Don’t Go” arrives fourth and is my favorite song on the album. A delicately picked guitar serves as the backdrop for this rocknroll head-nodder, the walking bass line and punching guitar accenting the beat with the drums. But the obvious shining moment is the chorus: “Honey don’t go” repeated throughout with what easily must be a 5-part harmony. Stunning.

“Space” closes out Volume 1 and does so nicely. What begins with mellow guitar and keys eventually builds into an all out rock song, the drums pushing the beat with their steady rhythm. Wilson shows his chops as a songwriter here too.

The way Kris holds “fate” at the end of that passage is killer. As it fades off I swear I can hear his foot tapping the tempo underneath. You can definitely picture him in the studio, giving his all to the delivery of the line. There’s more of those stellar Kris Wilson harmonies on “Space,” especially at the end. It of course reminds me of that famous, other Wilson who loved to layer his songs in harmony too…

Recorded and engineered by Jalipaz at Audioconfusion, I wanted to find out more about the making of Volume 1 so I contacted Wilson and he supplied me with answers to my queries. Read the full interview below and make sure to check out Volume 1 on your preferred streaming platform…

YabYum: So I seemed to glean from your post on Instagram that you recorded the songs on Volume 1 last summer? And that this was at Audioconfusion where you’ve recorded in the past?

Kris Wilson: After the recording of the last Blu Joy EP last May, we didn’t really have any recording plans for the near future, and I’m always trying to record. I had never had the opportunity to go in by myself as the studio time was expensive but in July I had a little extra cash so I decided to ask Jal if I could have a day in the studio, and Volume 1 is what came out of that.

We at YabYum love Jalipaz and the releases that have come out of his studio over the years. Would you care to say a few words about why you decided to record with him and what’s kept you coming back? Does he help produce the albums with you or is he in more of just an engineering role? Maybe it changes per song/album?

Niqo (drummer of Blu Joy) and I called up Jalipaz off his website on Google back in Spring 2018 wanting to record an album, and just by sheer coincidence he lived right across the street. On the phone call we said we were something like The Beach Boys mixed with Weezer and he was like, “Holy crap that’s my specialty.” We sent him some demos and met up with him later on for a meeting. Since then he’s really been a figure we in Blu Joy look to for advice as well as he is always down to help. He put our name out in the waters for our first few shows and whenever we don’t really know what to do musically we usually just meet up with him.  Jal’s our mixer and engineer but also our musical guru. We probably woulda’ had a bunch of flops…

Are you playing all the instruments on this release then? Didn’t know you were a multi-instrumentalist if that’s the case. Is the piano on “Slow Rockin'” the one set up in Jal’s studio??

Yes, I play everything on the record as well as mixed it to the best of my ability. The piano is the one Jal has. It was just tuned and we put 2 mics into the piano thru the front where you would stand sheet music and got a pretty beefy sound. It’s actually on two tracks because of that, the bass notes of the piano part and then the high chords. Jal’s always doing wacky stuff.

When did you start playing music? How about when you started writing your own songs?

I was playing the drums for a couple years with nothing else in mind but when I was around 13 I picked up a guitar and started hammering away like I saw my favorite bands do on YouTube. The songwriting just kinda came with the learning of the guitar too. When I picked up the guitar I would also sing, so pretty soon along after I could figure out little chord patterns. I was writing little tunes left and right.

While the description ” 50s doo wop and 90s alternative” that you use to describe Blu Joy is still apt here, I feel like there is a heavy dash of 70s rock within the songs found on Volume 1. Is this a fair assessment? Who would you say are some of the artists/bands that influence your writing style?

It’s funny you say that this EP sounds a little 70’s. When I was recording, Tyler from diners came by, and after one failed take of “Space” he went, “Hey Kris, you’ve been listening to Supertramp recently, haven’t you?” and we all burst out laughing… I had been in a bit of a Supertramp/Wings phase in the summer so that’s where that tinge came from.

I’ve always said “50s doo wop 90s alternative” to describe my style due to the way I learned. I watched a lot of my favorite bands at the time on YouTube — Weezer, Nirvana, The Smashing Pumpkins, Green Day — and would emulate what they did on my instruments. But I’ve always had a love for 50s and 60s pop and rock like Neil Sedaka, Frankie Lymon, The Cleftones and later on, The Beatles and The Beach Boys. When it came to writing words and melodies, I’ve always turned to more of the earlier style love ballad, but since I only knew how to play like those 90s bands, it just became the mix. Or at least i try to think. It’s always hard trying to fit your music into somewhere, to me it just comes out.

Obviously this is the wrong time to ask this, but did you ever have any plans of performing these songs live? Would they eventually become Blu Joy songs or perhaps you would play them solo/work up a new band to perform them live when we can all go out and enjoy live music again for the love of gawd?

You know I don’t know if I’ll ever play them live. I do very much like the songs, and perhaps if I’m playing a solo gig I’ll play them, but Blu Joy is mainly what gets the gigs at the moment.

I really like the album cover for Volume 1 as it sets a good accompanying tone for the album. It looks like a pic maybe taken in southeast Chandler or Gilbert?

Your guess may be right my friend, I actually do not know. I was driving on some little 2 lane highway somewhere lost and saw those houses and snapped a pic. I also felt it kinda had the same feeling as the EP. It was taken around the time I was recording.

I’ve talked with other artists about the fact that their album covers are often rejected because they don’t have the artist/album name on them or, in your case, you tried to use the Roman numeral “I” for “1” and that was apparently an issue. This really infuriates me as I don’t think every artist wants titles slapped on their cover art, and when they do, they should be able to control what the title/spelling is. Do you agree with this at all? It apparently it has to do with store distribution and preventing spam but it seems kinda lame…

I wasn’t expecting the first name of Volume I to be rejected and was confused when it did. I do feel like the artist should have complete control over what they’re putting out should look like and be called. It’s the one thing that can truly make your project stand out against the tidal waves of music coming out on streaming platforms.

With this release being Volume 1, does this imply we might see future volumes as well?

For a really long time I had absolutely no idea what to call this. In Blu Joy too we always have a hard time trying to think of a name for songs and EPs ‘n’ such, but one day it popped in my head and I loved the idea because I could make more volumes, and never have to come up with another name again. I also hope to continue making volumes so when I’m old I’ll have this musical scrap book I can remember past times by.

How are you faring out in the world right now what with this pandemic going on? Are you an “essential worker” somewhere and your schedule hasn’t changed much or are you able to stay at home more and dwell on everything that’s happening?

I guess I am an “essential worker.” I deliver pizza so my schedule hasn’t changed, just the amount of people ordering.

I know with everything still up in there this is isn’t the best time ask this question either but what’s upcoming for you/ Blu Joy? Are you always penning new songs? Are you virtually practicing at all? Any videos planned your songs off Volume 1?

Niqo and I are still practicing. We have a really big project planned whenever this is done so we are really just using this time to start preparing for that to really make it something special. The second we can play shows again we wanna be out there 2x better than before. Not much writing for me personally has been going on, with all this it’s hard to find inspiration. We have a million old songs were getting thru and recording demos to keep away the rust.