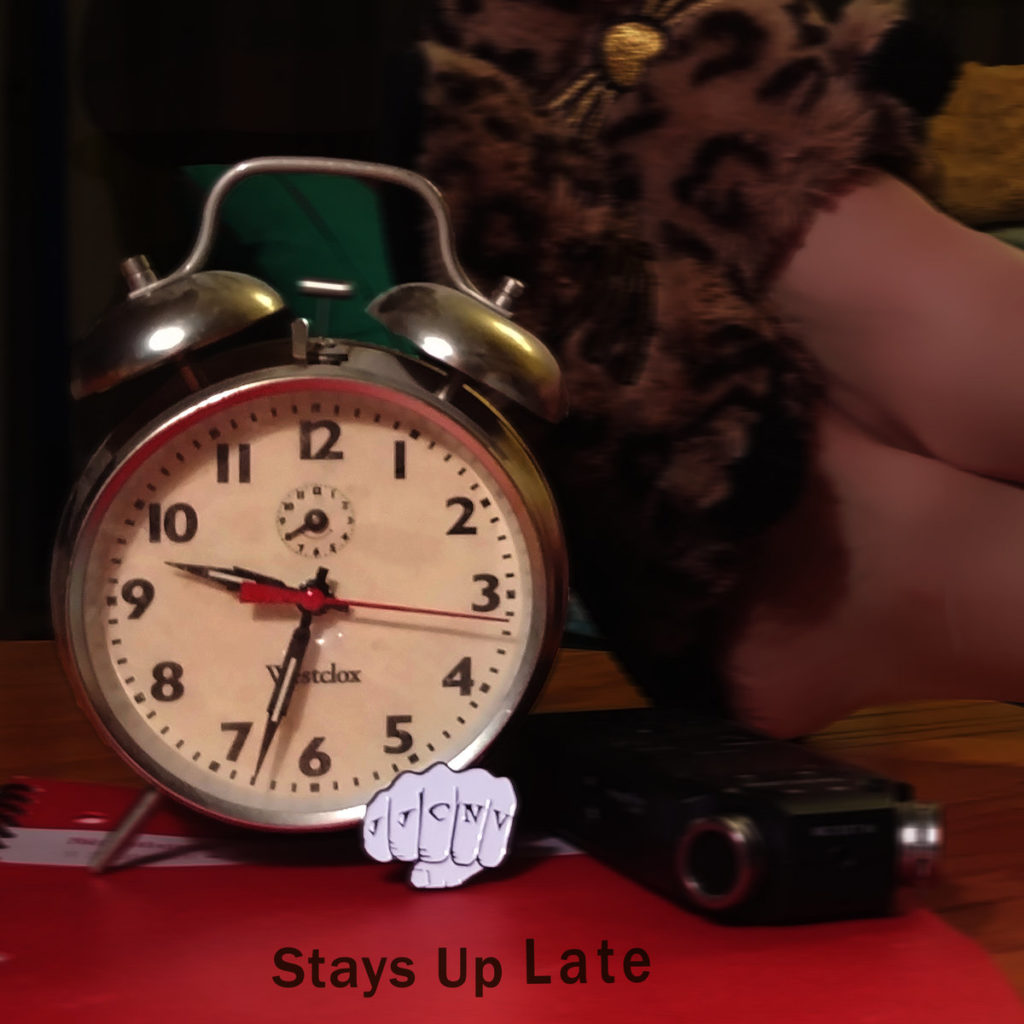 The number seven has long been considered a lucky digit. Different reasons why for different folks. Ask a numerologist, a biblical scholar, or a person who gets revved up by tossing dice in the name of gambling, and you’ll get some theories.

I’m not tethered to any particular idea about it; just like to roll with it as an option on a case-by-case basis. In the case of the seven songs that comprise JJCnV’s latest EP, Stays Up Late, I feel pretty lucky to get to aurally absorb this stellar group of tunes.

Let’s get a bit of housekeeping out of the way: I play music with Dana S. (guitar, vocals). I knew JJCnV as a band before I knew them personally, watching their sets of sonic disruption in Phoenix area clubs for a few years before connecting.

In its nearly 22 minutes, Stays Up Late is the musical equivalent of strolling through a drive-through car wash … without a car. Sometimes there’s two spinning brushes rubbing your ears & pushing your gears, other times you get a reprieve while thick drops of water minimally plop atop your head as you wait for the next punch. At the end, you shake yourself off, wonder what just happened, and then wonder how fast you can make it happen again.

The opening track, “The Balloon Mistook for a Man” is an easy contender for song of the year. No time wasted on a lengthy intro here; the song crashes into being. Drummer Jeff Barthold lays a hooky rhythmic foundation emphasized by jarring cymbal hits as Dana S.’s guitar and Pete Hinz’ busy bass work make themselves known.

In its steady push forward, the song lets each player stand out, individually, without losing the cohesion of the unit. The band knows how to keep you inside of the song, whether you’re focusing on Dana’s melodic riffs or noisy punctuations, Hinz’ intricate bass playing, or those hypnotic drum patterns by Barthold. Hinz takes the vocal duties on this one, his voice traveling from conversational to gritty.

JJCnV also has a horn section. The Blowhards, who are Mark Anderson aka “Sir Real” and Trent Morue aka “Kid Nap”; sax and trumpet, respectively. About a minute and a half before “Balloon” ends, that sax joins the party, adding a powerful edge to the track. Background vocals add to the mix to give it a raucous finish.

“Time Machine” proves that you don’t need fancy tricks to make a damn catchy song. The lyric-driven tune features Dana on vocals that are smooth and patient as she lures you into the story; “I built a time machine for you and me / It runs on marble cake and strawberry ice cream …” She keeps it steady front to back, background vocals add some zesty layers. A few songs later, on “Witch Mountain, you’ll get to hear how she sounds when she feels like belting it out. Her voice and Hinz’ together are a whole other magic. “Burts” gives you a taste of that.

The band’s overall sound includes a lot of punk — art, proto, and post, along with interesting grooves, and a lot of wit. At times, their No Wave approach earns them a rightful place between seminal groups like James Chance & The Contortions with their jumpy minimalism and the more fluid and tribal sounds of Bush Tetras. They’re not dated, though, you can put them up against, or alongside, any current post-punk act.

The record was recorded at Waterworks Recording and engineered by the studio’s main man Jim Waters. That guy’s had his hands on a lot of amazing records over the years. The tone he created on this one has a heat and depth that lends itself to the attraction of the whole package.