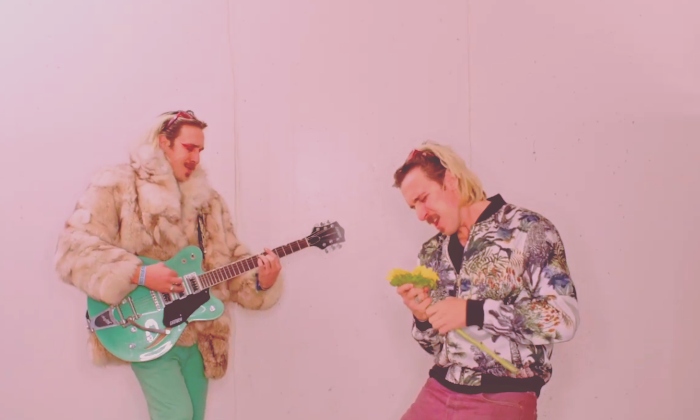 “Endless Rolling Thunder” marks the first official single from Gnarwhal Jrz. The artist adds a catchy layer of surf guitar to the sunny indie sound. The music video for the new single offers an additional portal into the internet-reticent Gnarwhalz Jrz. Phoenix’s Ray Squared Productions was behind the filming (no surprise there).  Gnarwhal Jrz suggests listening to this track with headphones, like, the kind that actually go over your ears. I suggest you take his advice and watch this video.

“Malembe” marks the debut single from Latin American artist Gotopo. The new track offers listeners a reinterpretation of an “Afro-latin-indigenous song” while the instrumental side presents a future-facing feel. I sense that might be a pervading theme with Gotopo’s music: half a mind to the future and the other half on the past. This wondrous fusion heard heard can also be seen in the Latin Futurism of the music video for “Malembe” below.

The British band known as the India Electric Co. released this jazzy feeling indie-folk single and a space-themed music video to go with it. The two fit together surprisingly well. You know, the ups and downs of love, the hazards of space travel, it’s all so nauseating and uncertain, but thrilling nonetheless. The band is getting ready to release their sophomore album this year so hop on that pre-order status.

The Woodworks release a wealth of videos recently and we’ve been excited to feature them all (see here and here) so I can safely say that “Qlafter Meds” is definitely the strangest of the bunch. In fact, I feel like acid was consumed either by me or the band every time I watch this music video and I am 99% sure it wasn’t me.  I am definitely certain that I did not intentionally consume drugs today even those this video has me thinking otherwise.

Are you about to watch someone packing up albums for shipping for the next five minutes? Yes! Is it totally worth it? Yes! If you were already a Soft Shoulder fan you wouldn’t be asking these ridiculous questions. The is an ambient soundscape for everyone who enjoys a good drone session and I definitely fall into that category. Zen out with “Fortuna Four” and then score a copy of the album from Gilgongo Records over on Bandcamp or Discogs.

We all have anxieties. In the case of the artist known as Ismy, those anxieties include “Lyme disease, gender dysphoria, and death” which Matt (aka Ismy) approaches in a playful and minimal manner in this synth-structured soundscape.  “Citrus” is the perfect partner for some living room dancing or just some at home chilling, but make sure you check out the visualizer below first.

This track from RPM Orchestra, also featuring Andrea Garber, takes a 17th Century composition by Giovanni Legrenzi and melts it. That shouldn’t be too surprising for anyone familiar with this experimental act from Phoenix. They love to take the old artwork and make it newer and weirder for modern day audiences. Check out the video for “Che Fiero Costume” below. You can also hear the single on RPM Orchestra’s EP, Singles, available on Bandcamp.