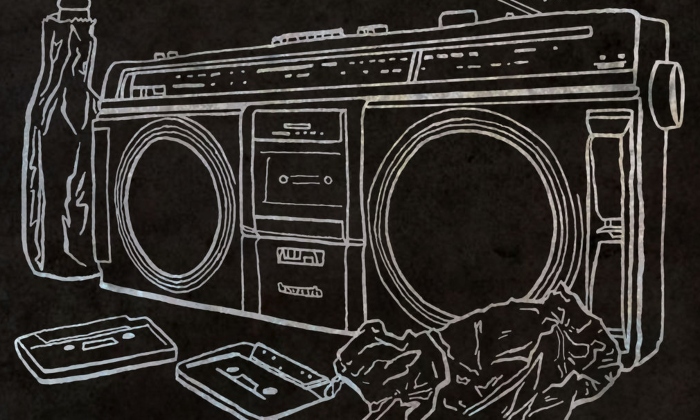 This track is the very first single from the new EP, I Was Once A Charming Man, from the Phoenix songwriter known as Ghost In The Willow. The EP was orginally slated for release this month with a tour to follow but the release was pushed back to a later date. Thankfully,  Ghost In The Willow decided to release “X-Mas Tinder” as a sample of what’s awaiting fans. The GITW sounds hit harder than a lot of acoustic alt-rock and that might have something to do with the punk rock roots of the band’s frontman and principal songwriter, Gil Rodriguez. The gravely vocals and driving guitars lends “X-Mas Tinder” a rugged, road-worn feel to the overarching sound, but the instrumental energy will keep you charged. Check out the new single from Ghost In The Willow. Maybe we can even expect one or two more before the EP comes out later this summer!

This Italian psych-rock trio sent us this track from their new album all the way from Italy and I’m pretty into it. The feverish guitars and rapidly oscillating time signatures call for a frantic dance party of one as you listen with the volume turned all the way up. “Daily Jobs” addresses horrifying prospect so many of us face of dealing with the ins-and-outs of an unfulfilling (or just plain shitty) job for the rest of our lives. For those of us out of work, a return to those conditions might seem like a return to the glory days, but here’s hoping we can hope for more. Because, as the Bee Bee Sea seek to illustrate on this track, days are for drudgery while nights are for music-making and revelry.

“Specters of the Western Night”

When I saw the title of this track I imagined a much more wistful sound. But the specters in this track lie hidden in the lyrics; tucked away in a deluge of rowdy, foot-stomping rocknroll. “Specters of the Western Night” packs a bit more punch than some earlier tracks we’ve heard from POST HOC and the song kicks off with some Southern Rock style guitars. There’s even some metal-level screech on the backing harmonies that really tie in. And, although both those elements are present, POST HOC still retains its style as the chorus comes washing in like a high rising tide. Check out “Specters of the Western Night” here or on Spotify!

This Phoenix-based eletro-punk artist relocated here from Seattle before recording this song. I wonder if this music “written, recorded, and mixed in my bedroom in 100+ degree weather in Arizona” after the cloudy skies of Seattle have anything to do with the aggressive temperament of the soundscape and lyrics on “BASTARD IN SEATTLE” by FAKEDEATH. I could imagine the transition was jarring and the sound aesthetic on this album is one of agitation, frustration, and alienation. All of which can be heard on this single. This track might be slightly more approachable than some others on the EP from whence it came, EGOVENTRILOQUISM, but I’m almost leaning more toward the rowdier numbers from the EP. “COMPANY MAN” is a punk rock banger. Check out “BASTARD IN SEATTLE” by FAKEDEATH here and, if you want to delve further, head to Bandcamp to check out the full EP.

This lofi pop punk jam written by Manolo Lago and performed by E Z P Z really hits on that summertime in the Sonoran desert feel. It starts of listlessly wandering through hazy thoughts and then the energy slowly starts ramping up until you find yourself in a frenzy and you’re not entirely sure how you got there but it feels completely natural. Yep, every summer day here basically. Daylight hours passed in a heat haze as your mind drifts, often aimlessly, until the sun sets. And, then, darkness descends, people can emerge from their homes and (pandemic permitting) come together to make music and get rowdy. Now, condense that experience down into the space of 90 seconds and you get “summer in az,” drenched in sweat and everything. This track is just one of the jams that appears on E Z P Z’s new EP, Hits, which now available on Bandcamp so check it out in full!