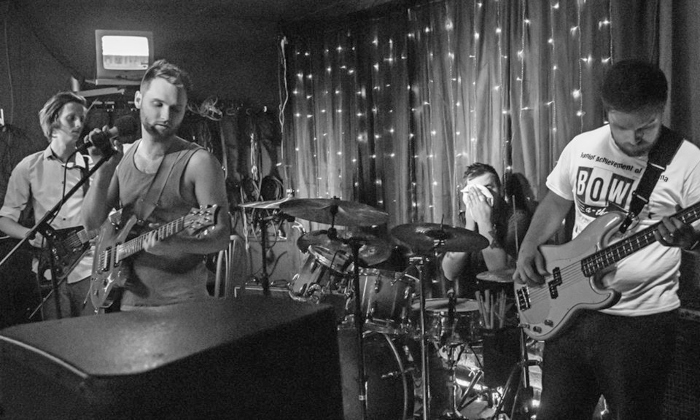 Who are you and are you in a band or do you perform solo? If in a band(s), what is the name of that band? What instrument(s) do you play?

Carlin and Dominic played in a band called Shampoo in high school. Dominic and Tyler re-joined the band in 2012 with Liam joining in 2014. So we’ve been playing together for a while, the current lineup for about six years.

We all started playing music sometime in elementary school, we’ve played various instruments over the years. It’s a hard question to answer, it’s just something that we’ve always felt drawn to individually.

We played a show at Paz Cantina in something like 2014 with Elephant Gunn and The Old Storm. It was a great outdoor setup, the crowd was amazing, and we ended up playing a lot of shows with Elephant Gunn and Old Storm after that. It was also an outdoor set that was over a hundred degrees but that made the performance feel like an emergency in a way that I think was great. They also gave us a generous amount of free drinks so we ordered Hendricks and tonics and craft beers and got fancy drunk with everyone after.

We’ve been wanting to play like a Crescent Ballroom or The Van Buren. Those are great venues and we’d like to crack into playing with touring acts. Hop Along put on a great show at Crescent last year, playing with them would be amazing.

Tyler: I just got The Epic by Kamasi Washington, 3 by Portishead, and Miss Antropocene by Grimes on vinyl recently so those have been in heavy rotation.

Dominic: I’ve been listening to Erik Satie at times when I need to calm down and take it slow, but when I want to get amped I listen to Zabutom and Prof.Sakamto.

Tyler: I’ve been reading Mistborn Era 2 by Brandon Sanderson and playing an unreasonable amount of Animal Crossing. I haven’t really been watching much, I’m falling behind on Westworld and really everything.

Liam: Just binged a bunch of Star Trek, TNG and DS9. I’m reading a biography of J.R.R. Tolkien called “Tolkien and the Great War: The Threshold of Middle-earth”, by John Garth.

Dominic: I’ve been binging Animal Crossing when I’m not going to virtual school. My island is off the charts.

Tyler: Animal Crossing and writing music is occupying a lot of my time but I’m trying to do some just fiction writing. I’ve been sick—not Corona—so my head is in kind of a strange place right now. I’m trying to use it.

Liam: I’m still working during all of this, so life goes on somewhat as normal. I don’t have a job that can be done from home, so I’m all over town just trying to stay sterile and get work done promptly so I can get home.

Tyler: Jon Stewart. If there’s anyone who could articulate and focus the frustration and fear surrounding this pandemic right now it’s him. Also I love Jon Stewart and we could talk about animals which would be cute.

Liam: Patrick Stewart, FaceTime, just to hear him say we’re all going to get through this and be the better for it.

Tyler: I made these simple peanut butter balls the other day. Just peanut butter, agave, and granola. Roll ‘em up and put ‘em in the freezer. It doesn’t qualify as cooking but they’re so good.

Liam: As far as home cooking…frozen pizzas and soup. Pickings are slim these days.

Dominic: I love making fried rice with some carrots and teriyaki sauce. Stir some eggs into that in the morning and voila!

Carlin: Home made ramen. Make a broth from scratch style.

We’re not getting together for rehearsal right now which is kind of frustrating to lose that stable day of work and fun. I didn’t realize how much I’d miss it but I really do. But we’ve been writing and recording new stuff. A little left of center, let’s see what happens kind of stuff. There’s a lot of anxiety and just pent up energy right now so we’re trying to channel it into music and it’s coming out in interesting ways. We’re looking at maybe putting out a quarantine EP of tracks written and recorded during this time. Maybe just a series of shorter releases labeled “Part x of ?” because who knows how long this will all be.

We’ve got some singles and an EP we released late last year called All That Glitters is Glitter on Spotify and Apple Music and all those streaming platforms. We don’t have anything for sale right now, if you wanna listen to our music it’s out there and we would be so stoked if it entertained you even a little bit. And we’re gonna be anxious to start playing shows again as soon as it’s safe and we can return to some sort of normalcy. You can follow us on Instagram or Facebook for that. There’s no way to support us financially right now but we’re fine, really. Order food from a local take out place that’s worried about staying open and we’ll call it even.

Check out Sedan Sedan on Spotify!