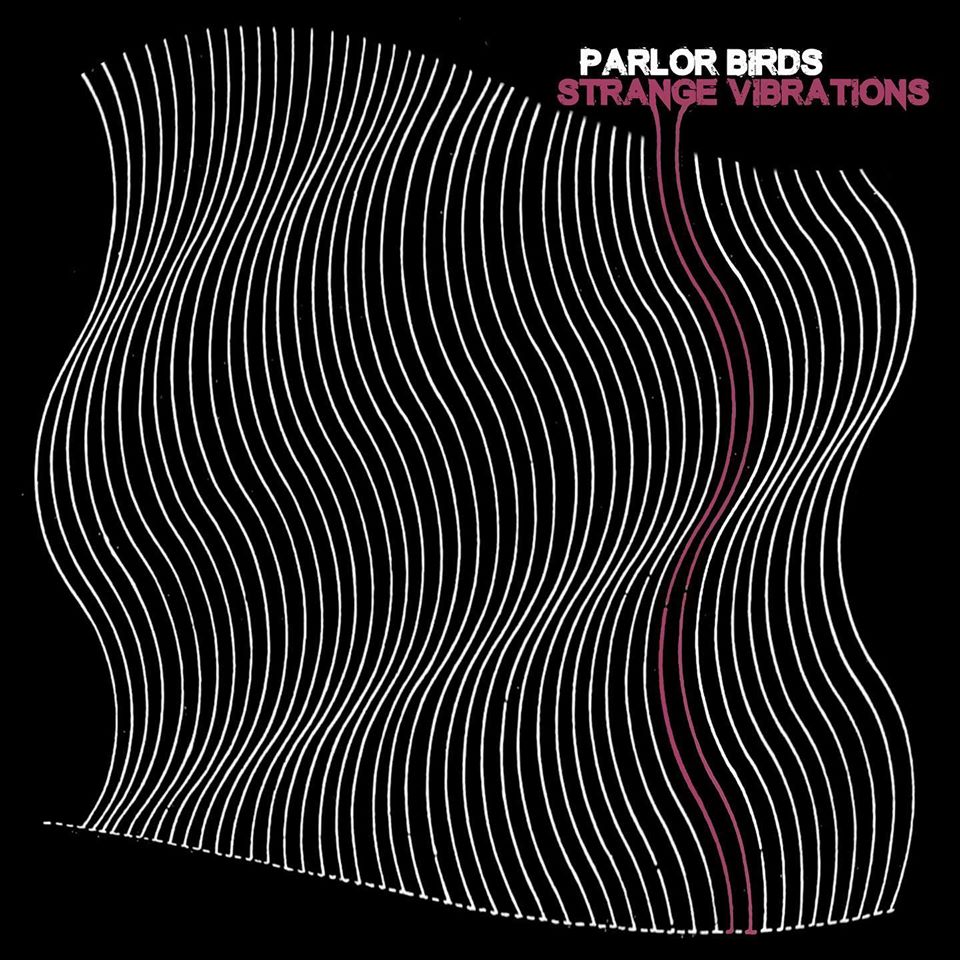 The much-anticipated debut album, Strange Vibrations, from the Phoenix duo known as Parlor Birds takes listeners on a ride through turns and loops of rocknroll’s history; intermeshed, interwoven, and reinterpreted. Featuring Mike Chapman on “noise, dirt, words” and Chris Kuhar on “thump, rattle, rat-a-tat,” the one constant on the new release is the dusty swagger the band brings to these 11 tracks.

After a brief introduction, the album kicks off with some stripped down garage rock on “Don’t Press Your Luck” before moving toward something a little more-bluesy/Black Keys sounding on “Bad Motel.” The clarity of the vocals offer a superb counterpoint to the grittiness of the surrounding instrumentation.  I have to say, I was drawn in pretty quickly. Full head bop jams happening here.

But the gears shift dramatically as we slide into “Lies” and the spaced-out psychedelia it has to offer. Strings and other instruments are layered in to give the song an airy feel. “Lizzards” continues this pysch-rock trend but puts the emphasis on the rock this time ’round for a slow-burning number before “Your Flesh” gets downright strange with its sparse percussion and hauntingly cannibalistic lyrics.

Then “Girl Is Gone” returns the energy, and good cheer, with some early alt- and indie vibes, xylophone included.  “On the Lam” revs things up again before “Girl Is Gone (reprise)” ties an atmospheric bow on top.

“Days Like Today” and “Kuhar’s Lament” bring us to our conclusion on a more tempered tone. The former offers a stripped down and sweet-sounding, albeit sorrowful, lamentation before the lithe closer.

We talked with Mike about the making of Strange Vibrations and what’s upcoming for Parlor Birds. Read the full Q+A below and make sure you check out the album as well…

We’re you born in AZ? If not, when did you move here?

Yes, I was born in Arizona.

How long have you been playing music? Did you start with guitar? Do you play other instruments?

I’ve been playing music for 24 years. FUCK. Yeah I started with guitar. I can play a little bit of piano.. On drums I consider myself a really bad Dave Grohl.

How did Parlor Birds come together? When was this?

Parlor Birds came together when I decided to leave LA and come back to the desert. I was with the band Dirty Lingo then and as hard as it was to move on from them, I had to keep playing. I’ve been playing in bands since I was 15 years old and I was freaking out at the fact that I might not be in one! So I called up my friend Chris Kuhar and asked if he wanted to get together and play.

At the time he didn’t really play drums at all and I thought I could sculpt him into playing exactly what I wanted him too, haha. (Don’t tell him that.) I’ve always preferred playing with friends first and foremost so we plugged in and went for it. I forgot how much work it was to start a band from nothing… we came together in the summer 2016.

Tell me about Strange Vibrations. Where did you record the album? Any musical guests take part in its creation?

We recorded the drums and guitars at Stem Recordings. After we left there we started piecing things together here and there. I took the files to my home studio (aka my spare bedroom), recording vocals, percussion, and midi stuff. After we pieced all of that together we sent it to our buddy Jaron Mossman in Nashville and he mixed it.

There’s a lot of variance in the sound as the listener moves through the tracks on the album. Do you think that has something to do with the time you put into its creation or the wide array of influences you draw from? Or is it more like a little of Column A / a little of Column B?

We recorded 6 songs at Stem recording studios and that’s not exactly a full length album. I really didn’t want to put out an EP so I started tracking from home in my closet. We also recorded one song in Kuhar’s living room. My wife had just had my son at the time so I was forced to be in my headphones a lot. I started making little weird tracks like the opener “Bird Twirl”, “Girl is Gone Reprise”, Kuhar’s Lament” I was trying to get to album length. I think it all fits under the Strange Vibrations umbrella though.

Really digging the album art too. Who made the cover for Strange Vibrations?

I designed the cover. Thanks!

What’s upcoming for Parlor Birds? I know with things up in the air right now, there might not be any upcoming shows so are you shooting any music videos or writing new material at all?

Nothing coming up anytime soon! I’m hoping after all of this shit is over people will be dying to hear some live music!