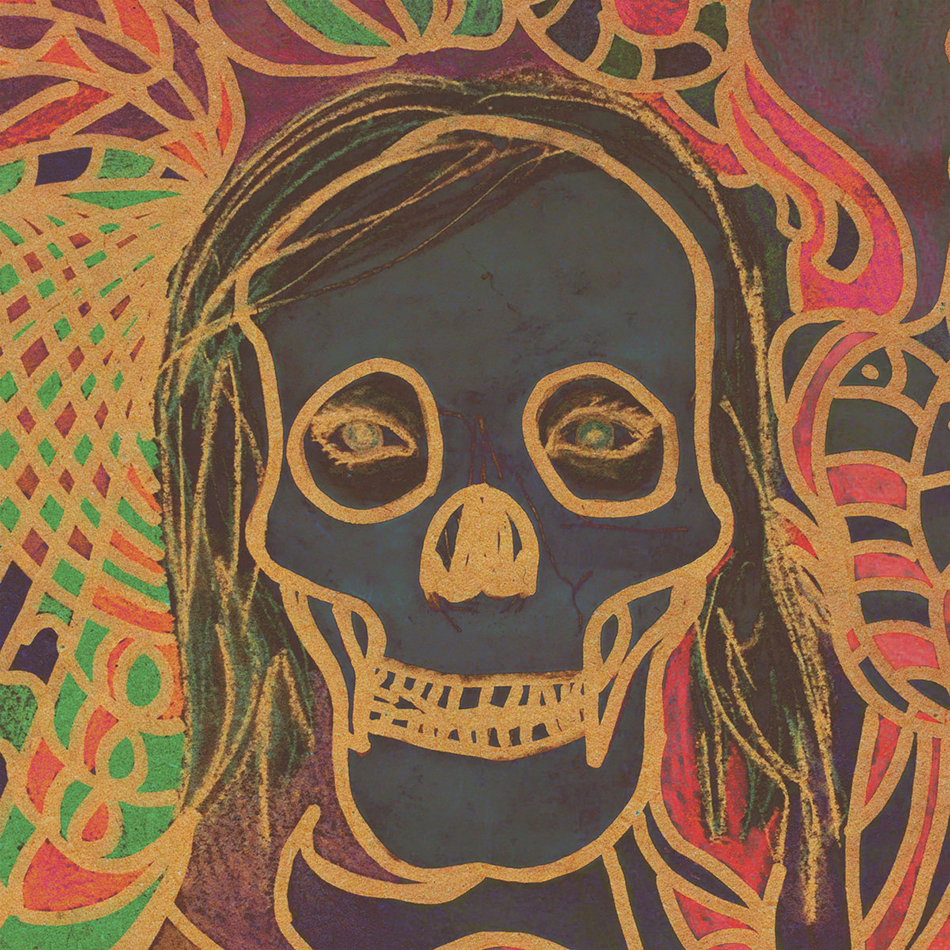 Having covered and enjoyed Strange Lot since their very beginning, it’s no understatement when I say their new album MindStatE is their best release yet. Dominic Mena (vocals/guitars/keys/drums) and Tim Lormor (drums/guitar) have left the dusty desert of Phoenix for the rolling hills of Austin and have come out swinging with this new release.

While the music is in the same vein as their previous records — surf and psych inspired indie garage rock — the honing of their songcraft over the past 6 years is evident here. It’s what you want a band you like to do, right? Reaching ever closer in their vision and sound to the best representation of what they’re trying to say with their art? In ways that you didn’t even know you wanted but are excited to hear? I believe Strange Lot has done that with MindStatE.

The album opens with the anthemic rocknroller “We Belong”. The pre-chorus sums up the mood of the song nicely: “We’ve been running across the desert, pouring water in our mouths/ We’ve been running across illusions, only want to get free.” Clearly, a great desert-drive song. The album’s first single, “Such a Feeling,” is up next bringing Strange Lot’s 60’s surfin’ swag to full force. God, I love reverb, and there’s plenty of it on this song, and the whole album, naturally.

As I hone in on what makes this album stand out to me from their previous releases a few things come to mind. I believe the influences on the sound of this record are more Black Angels and Uncle Acid and less Tame Impala and Mac DeMarco. I personally love the first two. Couldn’t ever really get in to the latter set. This is also the first time that the band has worked outside their home setup, choosing to record with Bob Hoag at Flying Blanket. While I definitely enjoy the sound of band’s first 2 LPs, there’s no doubt that Bob has an uncanny ability to make bands sound tremendous and has been doing so for years.

Two back-to-back favorites appear next on MindStatE, “Burn My Brains” and “Two Evils”. A classic-sounding, psychedelic guitar riff opens “Burn My Brains” and plays throughout, a droning groove blasting underneath. “Two Evils” then heaves you on the back of a wild stallion and takes off, not giving hell or high water if your ready or not. Galloping, single guitar notes dominate this song although the background synth throughout adds a stellar touch.

Title track “MindStatE” takes the edge off a bit although it certainly still pops. However, is this a breakup song? With lyrics like, “Had a better soul, had a better mindstate/ Had a better life, had to get a clean slate,” it certainly feels like it could be. “Gold Daze” rockets in next and, as of this writing, is my favorite song on the album. With a solid groove and some wicked sound choices, it’s get my head nodding every time. Dominic can write some pretty heady and awesome lyrics and has been doing so throughout Strange Lot’s tenure, with “Gold Daze” a perfect example:

In a gold mine, taking memories alive, come here shine
In the gold days, conversations got away, oppression
In the gold light, where you can’t stare away
The only constant question that remains, are you sure?
You caught me rushing all them away, I’ll be sure
And then they called me permission but I teach all day sick
We go play but won’t exert the heart away, all this caves
In the gold mine, a confession awaits

With a pattern of uninspiring or even sometimes lackluster song titles, I feel it’s important to showcase a deeper level of meaning that I believe runs through most of Strange Lot’s material. I often find the lyrics so awash in reverb and distortion that I have some difficulty in understanding them. Thank goodness they’re all located on the band’s Bandcamp page. While the sound of the music is what lured me in to Strange Lot’s pond, it’s certainly discovering and ruminating on the lyrical content found within that brings me back for repeat visits.

Rivaling that top track spot, “Dead Head” is another great example of what I mentioned above. An OK title reveals a solid surf number underneath with thought-provoking lyrical content: “They saw their comet falling, I could be their only sound/ That’s all they’ll probably show you, I could never lock & load/ And it’s all that comes to soothe you, and it’s all you know/ We found the lie they told and it comes between us.”

Probably the most literal song on MindStatE arrives with “No Revolutions!”. More punk in style and sound, this song gets right to the point, “Behold the violence within our town/ It breaks all silence without a sound/ No revolutions allowed.”

One issue I have with MindStatE, and the entire Strange Lot sound in general, is the missed opportunity for some quality back-up vocals. While harmonies on many of the lyrics appear along with the main melodies, I’m talking about some serious Ooo’s and Ahh’s. I can’t help but sing them in my head or out loud whenever I hear certain songs. Of course, I understand perhaps not wanting to create a product that then can’t be delivered live and, perhaps, that’s what is happening here. Whatever the reason may be, I just feel that many of the songs could benefit from some strategic backups and I wish I could hear more.

The record closes with “Read Your Mind”, and it’s just one of those songs that sounds like it belongs at the end of an album. You know what I’m talking about, all the best albums have them. In this case, the washed out vocals over dreamy guitar begin the song before the cranked-up distortion in the middle and at that end ebbs away into the ether… (side note: the album segues incredibly well into Gods & Clods, the bands previous release, so if you want the Strange Lot train to keep on chugging, queue up both albums back to back.)

I wanted to find out more about Strange Lot, their new album, and what’s been happening since the move so I contacted the band with some questions and they got back to me with some answers. Read the full Q+A and check out MindStatE below…

YabYum: How long have you lived in Austin, TX now? Did the whole band move with you or did you form a new incarnation of the band out there?

Strange Lot: We moved to Austin in July of 2019, so we’ve been here 9 months now. Our (now former) bass player, Josh Medina (of Old-Hat Analogue Recording fame) stayed back in Tempe, but we’ve been fortunate enough to find a rad new bass player here in Austin named Luis Valerio.

Please tell me about the Austin music scene from someone who is in a band based out of that area. Had you visited Austin before and were you familiar with the music scene at all before moving there?

The Austin scene is huge – so many great bands and venues. Overall, just a lot of awesome opportunities and everyone is so supportive.

We have played out here a few times over the years: a couple trips to SXSW and a short leg on tour with New Madrid, a sweet bunch of dudes from Athens, Georgia.

What was your perception of the AZ music scene when you moved to Austin? Did anything specific (other than Austin being a world-renowned music capital haha) prompt the move to Texas?

We had really grown to love the AZ music scene by the time we moved, but we were ready for a new place and a new challenge. Playing with Austin-bands touring through Phoenix helped solidify our need to be there as well.

Who are some folx or bands you’ve met since playing out there that you would recommend us checking out?

All the other great bands on our label Mas Music Records, especially The Boleys. The Rotten Mangos. Annabelle Chairlegs. Being Dead.

Please tell me a little about MindStatE. First off, it sounds great and Bob Hoag did an awesome job of recording and mixing it. I believe you guys self-recorded before correct? I thought your first two albums sounded great as well and that you had done a great job of recording/mixing them yourself. We’re you looking for a change of pace with this release? And, if you recorded it at Flying Blanket does that mean you recorded it before you left? Or were you making trips back here? Bob make any special guest musical appearances??

We love recording ourselves and will definitely do it again — just wanted the experience of working with another mind on the recording side and seeing what we could learn from one of the best in Phoenix. Not to mention we needed the experience of Bob’s legendary tambourine playing on our record. We put it all down before we left as a goal to go to Austin with something new in our pockets.

Use any awesome vintage instruments or gear over at Flying Blanket to make MindstatE? I know there is a bunch there… your sound has had a vintage sound to it anyway so maybe you have always done this?

Tim played on Bob’s amazing red, white, and blue Rogers kit, and also got to use some of his beautifully dark Zildjian hi-hats. Other than that since we already use/own vintage gear he was happy to work with it (1981 Gibson SG, 1963 Fender Bandmaster, 1963 Fender Jaguar, ’60’s Hagstrom Bass).

How did you hook up with Mas Music Records? The “blue and black galaxy” vinyl looks amazing btw…

Thank you! We’re very psyched about them. Mas Music Records caught one of our first sets in Austin after the move, at a great bar called Swan Dive and after a few meetings, we were making records together! They have been incredibly supportive and awesome to work with. We’re truly grateful for their partnership.

Can you tell us a little about your record release show?

The record release was one for the ages! First, it was on Leap Day so everyone was feeling a little “extra”. Second, it was at one of our favorite venues in ATX, Hotel Vegas. And finally, we got to play with two of our favorite bands: Christian Bland & The Revelators (of The Black Angels fame) and The Rotten Mangos. Needless to say, it couldn’t have been better.

I know you just released MindStatE bu what’s upcoming for Strange Lot? Had you planned on any touring that you have to take another look at because of this damn COVID-19? How about any music videos?

We had planned a tour for mid-May but that’s definitely been put on hold – other than that we’re working on putting out two more music videos and will definitely be recording/writing new songs.