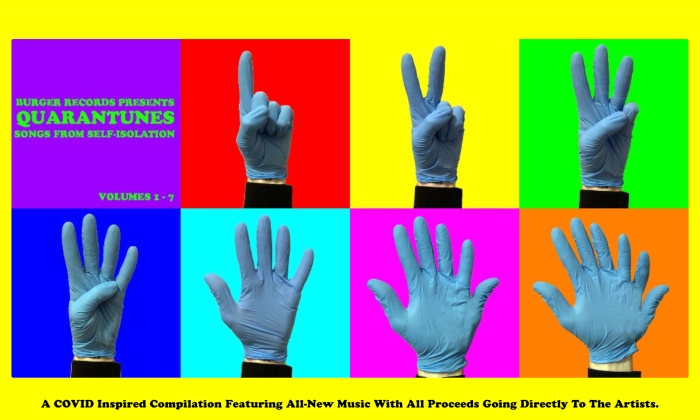 It’s a sad time for musicians and music-lovers alike. These two groups, accustomed to congregating in dingy dive bars, cramped venues, and sun-filled festivals, have been divided. We should be at record stores on weekends and coffee shops during the hours most people think it’s too late to drink coffee. We should be lingering in parking lots waiting for the next band to load in their equipment. But we’re not.

Rather than collapsing into the abyss of sorrow that threatens to swallow each and every one of us, we need to remember that our creative community still exists. It’s just responsibly hiding so that we can gather to hear music together once again. And, in the meantime, musicians and other folx are still finding ways of coming together, in spirit if not body.

In fact, the California-based Burger Records, a much loved music label with quite the robust roster of some of the coolest bands on the underground circuit, decided to release a 7+ volume compilation on April 16th of music written and recorded all during the first stretch of the Great American Social Distancing Experiment. Each of the seven volumes features 20 different artists so over 140 acts took part in the creation of  QUARANTUNES: Songs From Self​-​Isolation.

Some of the tracks are more overt in their quarantine themes. For example, Mattiel kicks off the very first volume with “Subterranean Shut-In Blues.” And, as the collection continues, you’ll encounter questions like Rollingchild’s “How can I hold you when we’re six feet apart?” or should I wear pants today? Do sweatpants count? What if Twister is involved?

Throughout the entire collection, we’re always circling back to these themes of separation and isolation brought on by the pandemic. But the tone is hopeful, uplifting even, and the lyrics are highly relatable in this truly unique time. From “Social Distancing Blues” to “Sweatpants,” you’ll definitely find some personal connections as you move through these songs.

The first volume gets things moving with some mellow, but upbeat, indie pop of the lofi variety that Burger is better known for than, let’s say, studio polished, radio ready, bubble gum jams. No, tracks like “Out When It’s Raining” by Fletcher C. Johnson and “I’ve Got A Friend Inside” by Foggy Tapes are best played indoors while wearing lounge attire on a late and lazy morning (or afternoon). The Rifle from Tucson adds “The Joy of Missing Out” to the first volume, but a number of other Arizona artists appear on the Burger Records compilation… which you’ll discover as we continue.

The energy gets turned up on Volume Two as The Zeros get things rolling with “Don’t Take Any Chances.” The Rebel Set is the secret PHX gem with their track, “Quarentino,” and Table Scraps, another YabYum favorite, contribute their single, “I Wanna Stay Home With U” on this volume as well. Volume Two moves from alternative to weird punk to the experimental edges of indie rock and surf.

Volume Three brings us the producers’ pack which includes electropop and bedroom synth, even some hip hop and funk.  On this collection, I’m partial to the celestial sounds of Touchy’s “Far Too Long” and industrial-influenced sounds of “Copia Fiel” by MEELT. The psychedelic closer, “Lockdown Flights” by Sonic Dealer, is also ranking pretty high with me, but I’ve been on a melting-sounds kick and this track hits that sweet spot.

The next volume start with The ExBats’s “Kwarenkween” so I was quite taken from the get-go. Hearing the band in this stripped down mode feels a little more intimate, like getting to sit-in on a songwriting session, but the comical approach on lyrics and sassy delivery puts that ExBats stamp on the track. Volume Four takes a turn for easygoing indie, even if some of the bands on this collection might not always fall into a tranquil category. These are, afterall,  QUARANTUNES and meant to be a companion in a time of isolation at home. Maybe you don’t want to be jumping off the walls of your apartment or upsetting your neighbors with your wily music-listening ways at all hours of the day and night. I found the simple songwriting of Bobby Harlow’s “No Time Like Tomorrow” and the bummer ballad by The Blank Tapes called “Isolation Blues” particularly enchanting on this installment.

Next up we have Volume Five clambering in with some bouncing rocknroll. Surf to psych to retro, Volume Five of QUARANTUNES runs the gamut of garage rock. The Resonars from Tucson and Phoenix’s Astrologer (featuring Andrew Cameron Cline in his new incarnation) both appear on this volume. The music on Volume Five will raise your spirits on the most downer of days, especially “Eat at Home” by Petite Sophisticates and “On the Phone” by The Zinfandels. I’m personally partial to the retro vibes of “No Memory of Yesterday” by The Resonars and the gritty charge of “Bag of Five Marbles” by TV Party.

Volume Six brings us to more trippy sounds from bands like The Smoking Trees, Golden Boots, and Mexico City Blondes. Desert psych, shoegaze, and some more experimental subgenres of subgenres can be found lurking on #6. From this volume, I’m inclined toward the lithe vocals of Death Hags on the song “OFF/ON (Don’t Give In To Fear)” as well as the kaleidoscopic “Stay Home (Paranoia)” by Mountain Castles and Red Belmont’s sonic journey, “Quien Quiere Ir a La Tierra.”

The Lemons kick off Volume Seven with their lively song “Lemon World” before Thelma and the Sleaze get slinky with “Peanut Butter.” There’s an eclectic mix on all the volumes of QUARANTUNES: Songs From Self​-​Isolation, but this collection embodies the most variation on a single album. There’s an emphasis here on lofi rock and quirky alt-country, but the boundaries of genre are blurry at best and Burger Records bands aren’t much for the ways of convention anyway. “Maybe I’m Crazy” by The Zoltars and “Sunday” by Go Cactus had me reaching for the repeat button but there are a lot of jewels tucked away in this collection. Fair warning: “Store Pigs” by Uncle Tom & The Charmen might fuck up your zen with its parody powers so brace yourself going in. It is worth it and a bit of knowledge going in can help you through the potentially triggering intro to this song.

An addendum follows the seven volumes of QUARANTUNES: Songs From Self​-​Isolation just in case you need a little more Burger Records goodness to help you over the hurdles of COVID-19 living. Why this collection is called QUARANTUNES: Songs From Self​-​Isolation #Addendum and not Volume Eight, I can’t really say, but these songs seem very much like a continuation of the compilation that perhaps just didn’t fit onto earlier volumes.  They should be listened too all the same. In fact, the addendum is one of my favorite “volumes” of the QUARANTUNES collections. “Repetition Repeat” by Frank Meyer and “Desolate Skies” by Dan & the Damsels are two favorites from the fourteen tracks on the addendum.

Whether you’re running out of toilet paper (or weed), suffering from those isolation blues, full of angst about the rapidly changing state of the world, or just need a gentle reminder to wash your hands, there’s a song on the QUARANTUNES collection to assist you. There’s probably even a volume of the compilation to match your mood or you can pair a volume with each day of the week. The good people of Burger Records and their army of artists can help you mellow in your living room or dance out your rage in your backyard.

I went through all seven volumes (and the addendum) of QUARANTUNES: Songs From Self​-​Isolation from start to finish on my first listen. Would recommend the experience 5/5 for all serious music nerds. Then I had time to return to the various albums at my leisure depending on mood, weather, and any other factors I considered pertinent at the moment of selection.

Sales from the individual tracks and from each volume of the collection go directly to the artists (with Burger Records footing the fees to maximize the amount going to the musicians). I know this is a difficult time for all of us, but some of us are having a harder run than others and artists often fall into this latter group. Folx who want to see the independent music community thrive should consider throwing some financial support behind their beliefs this year. I mean, just think of how much you’re saving by drinking at home!