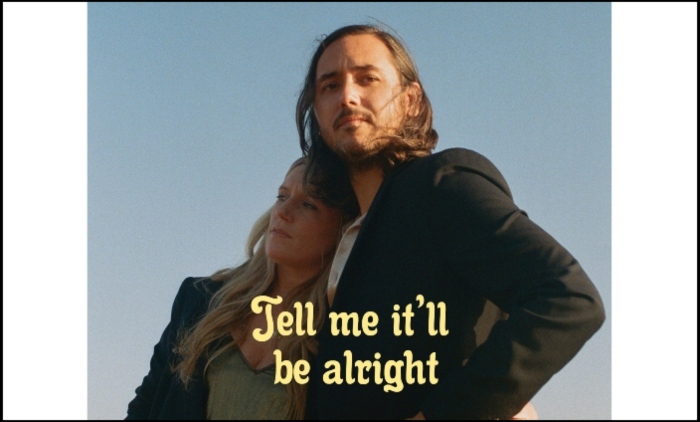 “Tell Me It’ll Be Alright”

Freedom Fry combines the musical talents of Marie Seyrat and Bruce Driscoll – one from France, one from the U.S., both currently based out of Los Angeles.  Prior to the Great 2020 Lockdown, the duo set out on a California adventure to record their new album and carefree liberty carries through into the music of “Tell Me It’ll Be Alright.” The song has an unconstrained feel. Like a breeze moving over a meadow. Like no one bothered to tell the song (or the band) that the Summer of Love ended before they were conceived. Of course, Freedom Fry wrote and recorded this song before COVID-19 was giving shape to our anxieties, but this lyrics seem to speak specifically to the concerns of this particular place and time. I guess sometimes you get lucky by getting unlucky. Whatever the case may be, I’m grateful to have “Tell Me It’ll Be Alright” by Freedom Fry to add to my playlists right now. The duo has a new album on the horizon this year so make sure to Like/Follow to stay apprised of the the LP.

Katie Haverly released a brand new LP, Matter, on March 20th and I think this is just what I needed right now to help maintain some calm rationale in a world that seems to be teetering on chaos. “Thieves” mixes up jazzy folk, smoky vocals, and lyrics poured straight from a reflecting pool into a crystal rocks glass, just so you can hear that ting of a higher harmonies, and offers us a sample of the album’s overarching sound. Structurally complex, but smooth to the senses. Check out “Thieves” but do not stop there. Make sure you give Matter by this Tucson singer-songwriter a thorough listening and score a copy for yourself (or Katie Haverly’s complete digital discography). Proceeds from the album are being given to Tucson Musician COVID-19 Relief Fund and a Fund for support for Exo & El Crisol employees. Good music for a good cause? Sounds great to me.

Phoenix singer-songwriter Janelle Loes is gearing up to release her sophomore LP, Stranger, this coming Fall and this new single offers us just a sample of what’s in store for fans, both established and emerging. The laid-back indie pop of “Criminal” provides a thoughtfully constructed ensemble sound for her agile voice to dance at its center. Loes flexes her skills as a songwriter her with an extended metaphor (we hope), but then again, she released her debut album at the tender age of seventeen . With tenacity like that, something tells me she’s continually fine tuning the skill set. Give “Criminal” a listen and join us in the wait for Janelle Loes’ sophomore LP this Fall.

This song about “a drunken preacher and heartbroken bartender try and make sense of their ruined lives” is delivered a sparse and peaceful setting. Those two things are less a contradiction than a calm acceptance of what is which, to me, seems to be what it’s all about anyway… right? This Santa Cruz band knows how to turn on the heartache for “Letters” with their lofi alt-rock sound. But, sometimes the best thing for feelings of woe is another tale of woe and “Letters” is here to help. For a melancholic mellow, look no further than Are We Hunting…

This promising upstart is already making waves as a songwriter and performer and she’s still a teenager. Yep, Sophie Dorsten joined her first band at nine and released her first solo EP at 13. Dorsten has a remarkably powerful voice that has garnered early attention for the artist and some pretty impressive accolades, like National Anthem performances and 2nd place in Alice Cooper’s annual The Proof is in the Pudding Competition. Her latest single, “Phasin,'” feels a bit different from some of the artist’s earlier tracks, but when a songwriter starts releasing early as young as Sophie Dorsten, you get to accompany them as they explore and establish their identity as a musician. This song is a little more ambient with spaced out synths in a minimal soundscape. I, for one, am excited to hear Dorsten branching out to experiment with new sounds. Check out the DIY video for “Phasin'” below. The track was co-created with Austin Moore (The Proudest Monkey) who also appears in the video… or so I was told.