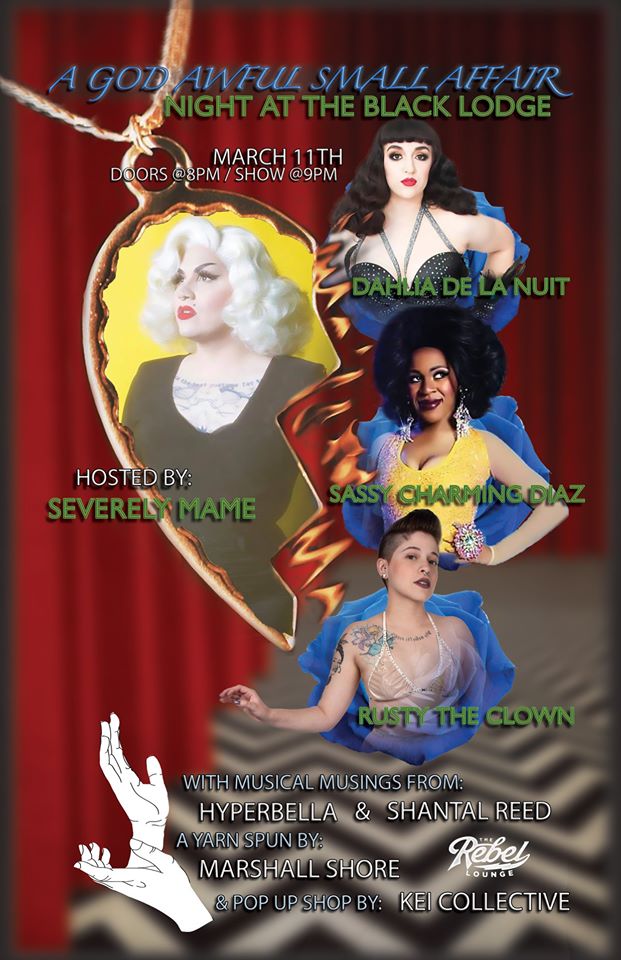 Since the dawn of what we know as 21st-century modern drag, it would be inaccurate to say LGBTQA-friendly bars have no place in the drag scene. After all, many of these bars were friendly spaces which allowed these events to flourish with the queer community behind them. Once upon a time, bars couldn’t simply advertise their LGBTQA-friendly stances and operated their promotion out of the spoken word, but in the year of 2020, the possibility of drag outside of the classic gay bar setting grows each year.

As drag expands outside of its original home, many folks who didn’t have access to these events either due to age restriction or an aversion to alcohol suddenly have options; be it drag bingo for the older folk, drag storytime for the kids, or drag combined with traditional local concerts like A God Awful Small Affair, born out of pure moxie by local photographer and artist, Paulann Egelhoff and sound engineer Gren Radcliff. 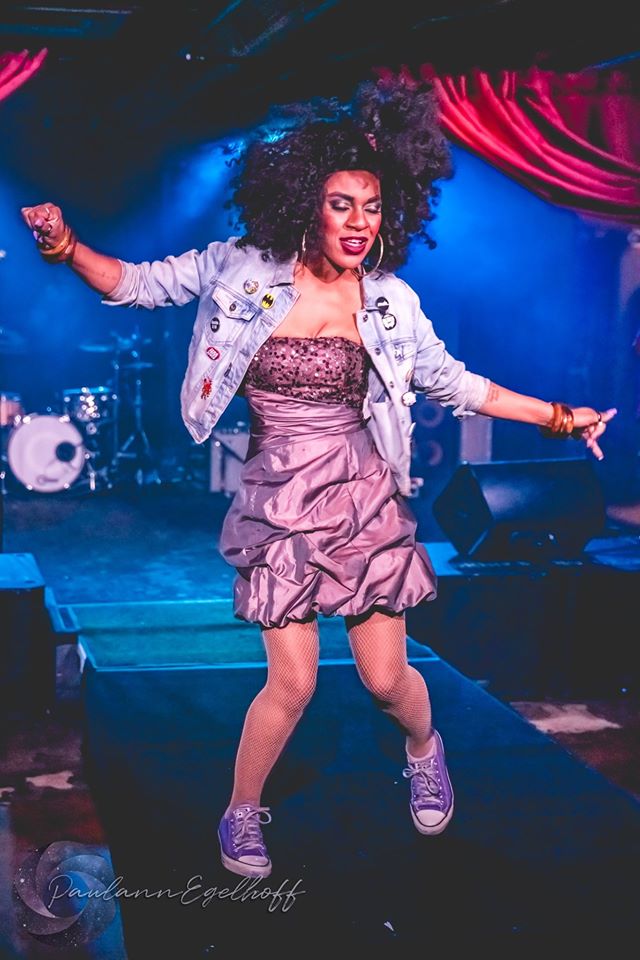 While A God Awful Small Affair does offer adult beverages, a quick look at the audience will expose the diversity the event currently brings to the Arizona drag and music scene. On the night of March 11th, the small affair promised a Twin Peaks-themed evening featuring a large slew of diverse talent, from dance-queen drag staple Sassy Diaz, Phoenix historian Marshall Shore, burlesque from Dahlia De La Nuit, and vocal powerhouse Shantal Reed. Drag performer Rusty the Clown offered a sensual performance while Hyperbella offered their catalog as the full-music act of the night.

After the show, I sat down with Paulann to get the savory details on what it takes to create a hybrid event of this kind, and the creative process of a simultaneous photographer, event producer, and visual artist:

“As like most folks in the queer community, we try to bring our culture to the mainstream,” says Paulann Egelhoff, co-producer of A God Awful Small Affair. “We’ve spent countless nights on smokey bar patios talking with other artists about the infinite ways drag can be presented to a larger audience, [and] we would ask ourselves questions like: ‘what spaces can we present it in, how else can we bring in a broader crowd, and how can we bring local artists of broad backgrounds and mediums together in one place?’

“Personally, we have always loved the idea of blending drag with live music and showcasing local creators and crafters,” Egelhoff continued.

The event is continuously hosted by the spiritual successor of “the three Ms” (Marilyn, Mansfied, and Mamie Van Doren), Brooklyn and Arizona sensation, Severely Mame. I met Mame on the go quite a few times, sparking conversations about the queens of yesteryear and our mutual love for oldies. Severely Mame carries the small affair with an old-school charm and style juxtapositioned against modern humor and outfits. During this episode, Mame introduced the show in “poncho chic,” covered head to toe in plastic like a Björk Christmas Tree.

“We were introduced to her through Astrud Aurelia’s “Farewell Show” and felt she was the best possible fit for the show we had in mind,” Paulann explained. “When presented with the idea, Mame seemed pretty excited to be a part of a show that involved both live music and drag. Also, have you seen her? She’s incredible!”

The discussion shifted to the creation of the event, as Paulann explained the casting process between them and Gren. Newcomers to the event will notice the stark diversity between each performer, and the guarantee of knowing you won’t experience the same act twice. Paulann handles the drag side of casting, while Gren handles the booking of bands and musical acts.

“When looking for new acts and talent, we typically draw from the well of the Valley’s incredible variety of performers and musicians,” says Paulann. “We try to have a different theme in our show every month, so once we come up with a theme, we’ll look for who would fit best for that theme.” 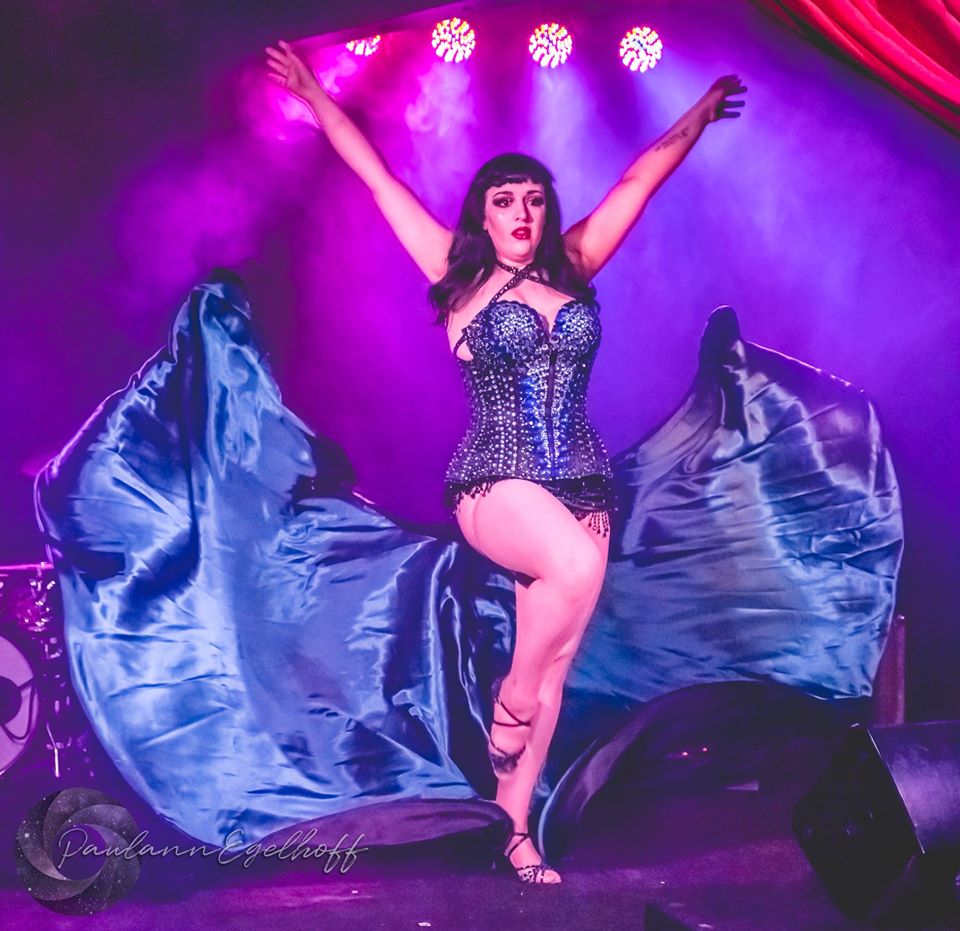 They also explained how Gren will set the tone with proper sound execution, while Paulann hunts for drag performers and other artists who fit the night’s theme. When asked about how performers can get involved with A God Awful Small Affair, they are more than welcome to reach out to either producer.

Before the show, I had no idea what to expect since I wasn’t familiar with the TV program, Twin Peaks. For all I know, “twink peaks” could have been a colloquial for the female mammary glands. Thankfully, “the glands have it,” and Paulann retroactively told me before the show to expect soulful and seductive performances. Marshall Shore regaled the crowd with their storytelling skills, and local fashion merchant Kei Collective was there to hock homemade wares and fellow crafts from the community. Off to the side by the bar sat a delicious Cherry Pie, and Paulann made sure to get in a word about a “damned fine can of Huss Brewing’s Coffee Kolsch.”

Similar to the other events I have witnessed Paulann work, this episode of A God Awful Small Affair went on without a hitch with little pause or silence before the next act would engage the enraptured audience. Comprising punks, Goths, and curious community members, the fresh presentation of A God Awful Small Affair ensures newcomers and returning audience members every time. The conversation concluded with Paulann’s future hopes for the event, which is anything but “God-awful”:

“We’d love to see our audience continue to grow as steadily as it has [and] we’re also interested in eventually doing some all-ages type shows involving performers [which] normally are prevented legally from performing in bar-scenarios,” says Paulann. “Most of all, we hope to inspire the performing community to open its collective mind to all types of shows and scenes.”

A God Awful Small Affair is held monthly at The Rebel Lounge. Further details on the next episode can be found on the event’s Facebook page.