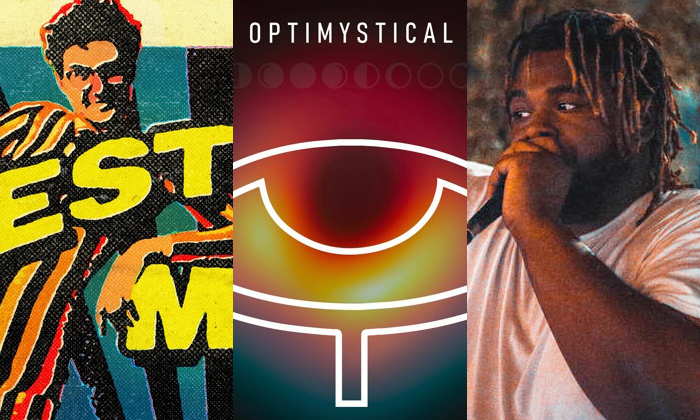 As we collectively place our tushes safely inside from the growing pandemic, what better time than now to get to know three local Hip-Hop artists from across the genre spectrum as we tentatively dive into mid-2020. Arizona is not only home to hardworking punk and metalheads, but also a slew of dedicated rappers and hip-hop artists giving beats and bars a special Valley spin. Check out the catalogs and words of these three eclectic artists below as we brave this social disease:

The band describes the formation of Optimystical as “a bounty of circumstance” involving five diverse individuals in the same place at the same time. Their guitarist and writer Thom Clifton and producer / drummer Lyle Begiebing (AKA The Party Upstairs) met in 5th grade in the rural Crozet, Virginia, with a mutual interest in music, later reuniting at Arizona State University in 2013. Keynan (AKA Nutter Tut), a West-Valley resident, is the only member who hails from Arizona. The group was rounded out by the arrival of bassist JJ Tusick (after work with The Party Up Stairs and the Osa Trio) while Cara Nassar on keys arrived to the valley for her master’s degree in Urban Environmental Planning.

“The inception of the band began with [Keynan]  laying down some vocals to Thom’s numerous guitar loops, then The Party Upstairs helped arrange, produce, and add percussion and other parts to the tracks [in order to] fill out the very first songs that would later appear on [our] first EP, Smile and Wave in 2018,” says the band.

When JJ and Cara came along, their instruments filled out live performances and contributed other styles of writing to the music. The band described their writing process as entirely collaborative:

“Most songs begin with Thom writing a guitar or synth/piano loop, then The Party Upstairs will produce, arrange, and fill out the track as the other members add their parts respectively.”

Sometimes previously written songs are revisited, as was the case for their Feb. 2019 single, “All Types of Love”.

When I caught their performance, I was impressed by the diversity of human experience in their lineup. Over the course of their set, Optimystical created a pleasing layer of traditional rock and R+B with vocal lines going between sung vocals and rap. Their new Void Of EP released a few weeks ago refines this concept found on “Close” and “Washing Away,” like classic Kanye or Hopsin if he didn’t become a religious zealot.

Flowing between the realms of political and party, the band’s self-proclaimed “conscious hip-hop” details the human experience through song and emphasizes danceable beats. Through their compositions, the power of unity between each member is evident through all the moving parts, instrumentals, and backup vocals throughout their new EP.

“We hope to create a special environment with interesting, thought-provoking music but overall, we hope people can truly get sucked into the experience and lose themselves in the moment.”

When I first came upon the “synth punk hip-hop” duo in a live setting, I didn’t know what to make of the Dr. Seuss aesthetic of their sound and image: Bentley Monet on drums sported a Janet Jackson-esque headset microphone as he pounded the percussion behind the zaney keyboard-driven antics and vocals produced by Kalen Lander. While Monet contributes screamed vocals and backups to their rapping keyboardist Lander, the two mics surrounding him produce vocoder-like effects which compliment the bars he slings.

Their music transcends the definition of acerbic, and takes an “everyman” approach to their brand which many indie bands tend to avoid with their on-stage personas. As a fan, if you meet these two at the merch table, you’re treated like one of the gang.

“The most basic way that we describe our music is SynthPunk HipHop,” says Kalen Lander and Bentley Monet, the brainchildren behind the duo. “It’s punk/metal played with synthesizers and rapping. We’ve definitely gotten faster and screamier as we’ve gone along,” the duo continues.

Their most recent single released in July of 2019 titled “The Laziest Man in the World” is a succinct entry in their catalog for any new fans who might not be accustomed to this sacrilegious combination of genres. The intro to the track features Kalen Lander egging on the audience, demanding them to “behold” before spitting the story of what it means to be the laziest man in the world. “Weight of the world? More like an early Wednesday,” Lander proclaims in verse as he shits all over our 9-to-5 ruckus and angers the invisible 1980s businessman demanding us to go to college instead of picking up a trade.

“We started with some pretty lengthy rap songs, but now we refuse to write anything longer than 2 & 1/2 minutes,” the duo explains, “and we really enjoy pushing ourselves physically, as well as cramming as much into a song as possible, without it wearing out its welcome. We don’t want to bore anybody, but most importantly, we don’t want to be bored.”

Half of the duo’s exciting performances stem from their ability to scream, play drums, rap, and put on some bastardized visual comparison of an organ grinder in real time. Although they may give the impression of being a technologically reliant act, Lander and Monet emphasized the “curated” aspects of their work:

“The concept of Snailmate has always been to be a live experience, first and foremost; no matter what, we want to play everything live, with no hidden tricks or effects,” says the duo. “That means: no backing tracks and no extra instrumentation, [and] if we don’t have enough limbs, then it’s not going down at the show. We record our songs the same way, with no extra frills, because we want to be honest about our sound and what we can do, and I really feel that the energy required to make it all happen is infectious, and the audience will feel it.”

With the conversation shifting back to audience interaction, Snailmate says they get excited when the audience is excited, with the joy of touring and playing stemming from the music which brings people together.

“We want people to come away feeling like they not only witnessed something that they’ve never heard before, but saw two people pouring their heart, blood, sweat, and spit into it,” Snailmate concludes. “We want it to be fun, because we are having a blast.”

When I interviewed St. Louis transplant and present-day Arizona artist La Tosque, his straight-to-the-point answers reflected his approach to the music I saw on stage, dating back to the Wowee album release show at Pueblo Revival. When LaTosque enters the stage, there is a certain lack of pretension mixed with cool intent which carries the vibe of the evening. Whether he’s alone or backed by a live band, he stresses the vocal importance of unity among the community between songs. Saving his 2018 single “La Familia” featuring Lee Water as a highlight during his sets, he signals the audience to join that family as well — figuratively, of course.

After seeing him perform twice, it’s safe to say there’s no Manson Family bullshit in the midst: much of LaTosque’s catalog lyrically tackles the tribulation of taking life one day at a time while accepting the growth, celebrations, and pain along the way. One of my favorite singles to see him perform live is “She Likes To Party,” a lighter track from his catalog, but a single which always gets the party going whether you recognize the song or not. The sleek hook sung by artist Vince in the studio possesses the smooth riff classic R&B is known for, with a contemporary structure. When asked what his favorite track was, LaTosque kept it brief, saying it was difficult for him to choose.

Local music junkies around the valley might also recognize LaTosque from his continued work around the valley producing shows for local acts, both inside and outside the Hip-Hop scene. In December, LaTosque booked prolific nerdcore rapper Mega Ran alongside the aforementioned Optimystical and Snailmate, and expressed the diversity of emotions one can feel while performing and producing a show simultaneously:

“Producing shows [and] performing are amazing,” says LaTosque Adams.  [Doing both] in the same night can be amazing and [cringeworthy] at the same time, however, I love it. Mega Ran was the headliner of the first show I went to after moving to Phoenix [and it was] like a full-circle moment [having him on the bill for my show].”