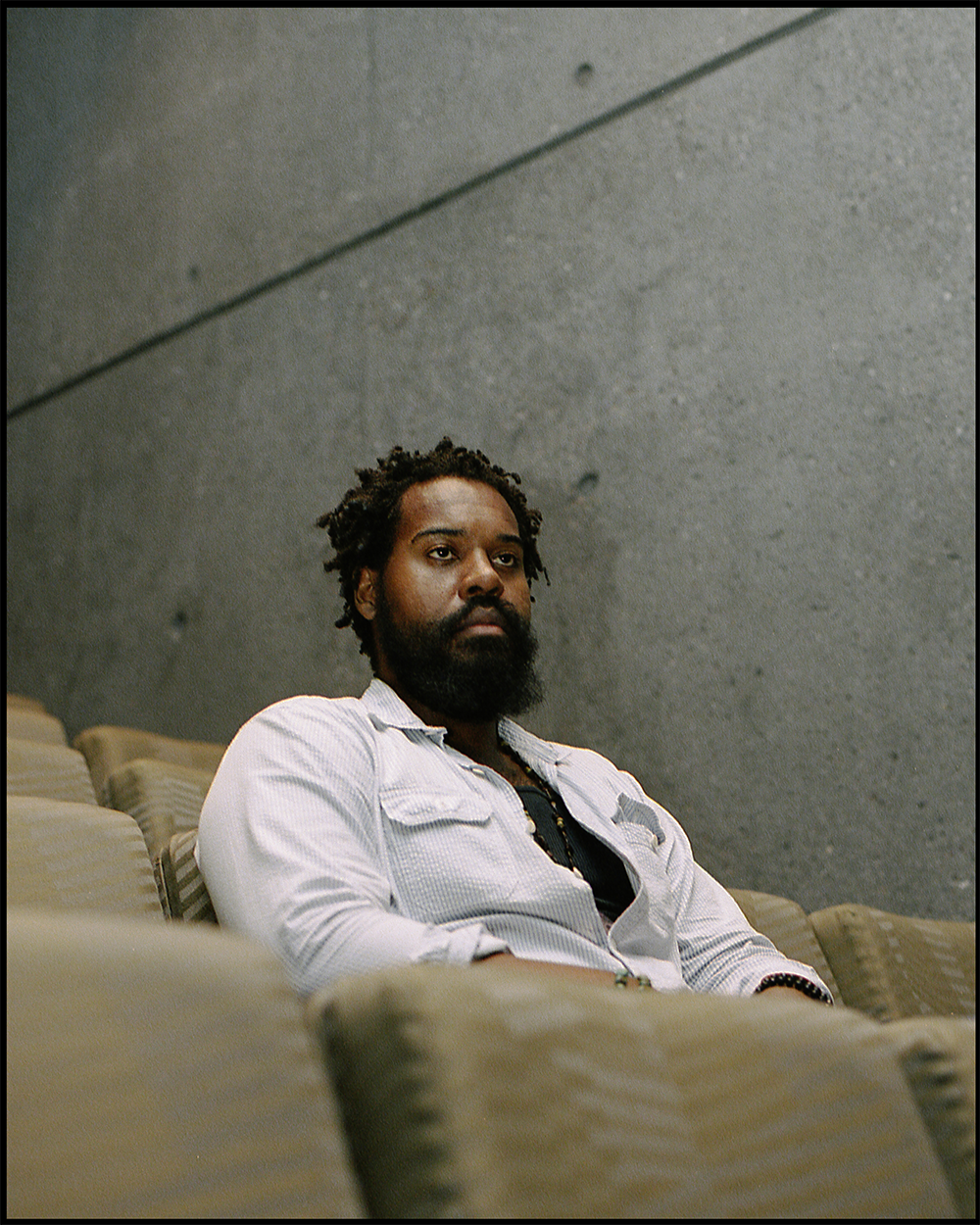 All photos courtesy of Geibral Elisha

Geibral Elisha and his band, The Geibral Elisha Movement (GEM), are stirring up magic, sending messages into the cosmos, and can regularly be found playing downtown Phoenix at venues such as the Phoenix Art Museum, Crescent Ballroom, and The Lost Leaf.

The band’s unique sound of improvisational, spiritual jazz tunes to the frequencies of the world and transmutes that energy into audible form for our listening, feeling, and dancing pleasure. These days, the crowds are getting larger as the Movement continues to grow, and with the group’s most recent full-length release, Revelation, the present only tells of promise and future success for the band.

But future success doesn’t concern Elisha all that much. “All information is given on a level we are ready for,” Elisha tells me on a January morning in Tempe. He’s talking about so much more than music at this point, but the sentiment rings true for the band as well. Elisha regularly talks about The Source and surrendering to its way—this intention is evident in the band’s music, which is inherently ritualistic and best enjoyed alongside deep breathing, presence, faith, and abandon.

Revelation is a film score that evokes its own visuals and messages. It is also a hero’s journey. We are brought into the album with the “Big Bang,” in which the speaker informs the listener, “You haven’t heard my story yet.” “Astro Boogie” is up next–a funky indoctrination to all things space, time, and otherwise to get us rolling. Not long after, the trials begin, but the listener need only grip to the wily roller-coaster rail that Elisha and the band provide us as the reality tether to which we cling as we dive into the depths of our own subconscious, en route through the uncharted cosmos and elsewhere–where few have dared explore.

Mind you, at this point in my listening of Revelation, only the fourth track has begun, “The Dance of the Thunderbird,” and we still have six tracks to go. Up next on the album is a song entitled “Astral Awakening,” so you see where we’re headed here: into the deep and then high and beyond. 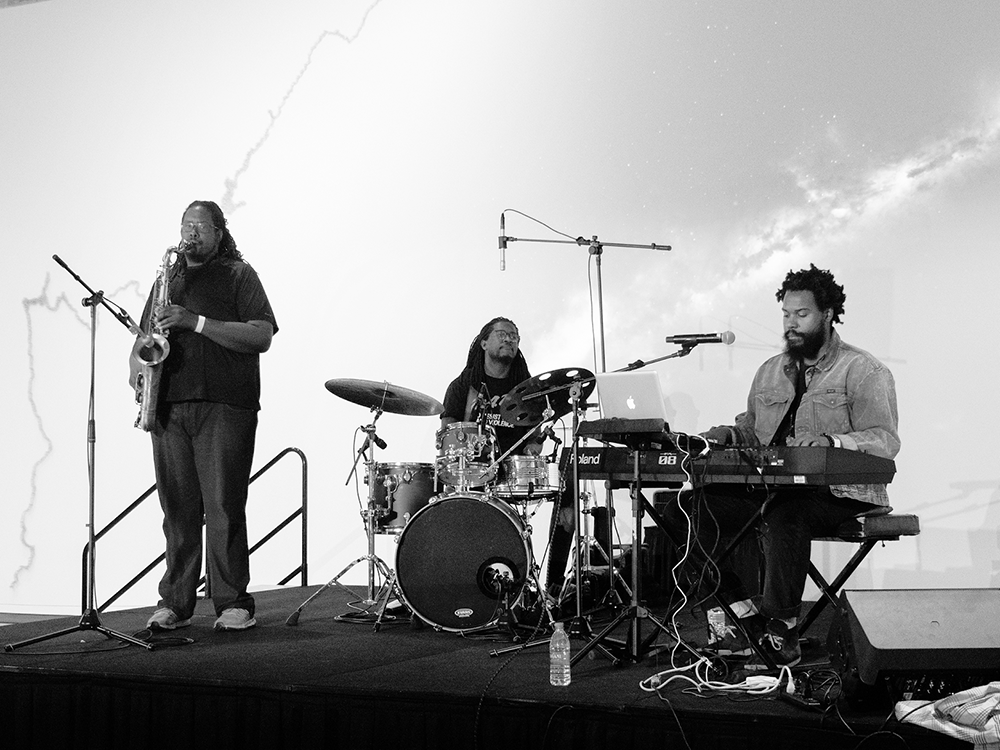 The Movement is ambitious on this record and truly hitting a major stride. Revelation is the band’s fourth release in three years, but it is the band’s only release outside of 2017–the first year they began releasing music. After 4 years of playing live and through various collaborative iterations of the group, the music and musicians appear freer than ever. They’re also incredibly tight–all of the tracks on Revelation were recorded live in as little as one take (and at most six)–but as tight as they get, they are letting it all hang out with little to no worries, trusting in their ethos that the universe knows, the music will guide, the path is lit, and the truth is revealed if only we allow ourselves to trust.

The album fluctuates between intense, loud, complex moments, and ride cymbal-driven, soft, meandering dream-jazz, accentuated by prayerful, soulful chants, like those found on “Neasden London.” Neasden is the sight of a temple that Elisha credits for having helped inspire his vision for the Movement. For Elisha, Neasden is where it all began–a holy place that nudged him forward. The track itself feels safe and womb-like–a comforting pause for the lonesome space traveler soaring through Revelation and beyond.

Elisha shares with me stories about his newborn daughter, what she’s already taught him (even before her birth), and his thoughts on the after and before life. This subtle dream in reverse then slides into the church-loving “Mattie Faye’s Prayer,” which features saxophonist David Moore. The song is an optimistic, soulful stand out that calls for love and community. To listen: stand up, close eyes, lift heart, open palms, and sway to Mattie’s soulful rhythm, giving thanks for all of the good things in life. In the hero’s journey, this is our meeting with the goddess–we have gone through our trials and tribulations of space, and now we are gifted with the knowledge we need to move forward, better than we were before.

Enjoy this easy moment while it lasts because up next is “Close Encounter of the Fourth Kind.” For the album, we are now past the tender moments of rebirth and thrust into the tumultuous, character-testing reality of atonement–the necessary confrontation with that which must be faced before, fittingly, “Revelation,” the grand accumulation of all that has been learned and experienced–one final look at the complexities of our journey through this strange and wonderful design.

Finally, “Angel” is our happy return. It is a peaceful, starlit carpet-ride over our grand story. The listener is left in a shavasana–a tranquil state of repose–having flown so far and come so near to what it means to be.

I asked Elisha to answer some questions in his own words about the Movement, Revelation, and what’s ahead. Here’s what he had to say:

Kevin Hanlon: What was the thought process in terms of planning and producing this album?

Geibral Elisha: I really wanted the songs to sound full. Layered and thick. Not like the older jazz combo stuff. I had been wanting to create a world album, in a sense, for years but I didn’t have the ability to. So, I began experimenting with samples at shows, and I’d seen the dynamics it caused. I wanted to capture that with this album, and once I had an idea of the songs that fit the theme, I got everyone together and we got busy.

How did GEM get its start?

The concept came about when I was going to London in 2015. I had already had the dream in which “Astral Awakening” was playing, and I wanted to create the world [music] album. This was [before] the movement…. I visited the Neasden Temple in London and my spiritual jazz inspiration began.  As time progressed, I began to get the inspiration for other songs, and we began to play a few of them around [Phoenix] a year or so more.

Are the songs on Revelation composed or purely improvisational?

It’s a combination of both. The only song that is purely improvised is “The Big Bang.” The rest have clearly defined sections, but we improvise and listen to each other and see how it goes.

Yes. It was recorded live, but I added the samples, and most auxiliary backing synths after the recording sessions.

(Note: The band recorded without headphones, and Elisha did all of the mixing and mastering on his own, making the album a true testament to the power of independent music and a low budget. To get this kind of quality under those conditions requires both tremendous musical ability and months of hard work and long days.)

What was the inspiration for this music?

The inspiration for the music comes from many things, but simply put, “within.” That’s why I like the album cover art, you can see it all comes from within, but at the same time it’s all connected to something bigger. If we’re talking about individual songs on the album, I plan on expanding on some of that during the album release concert… 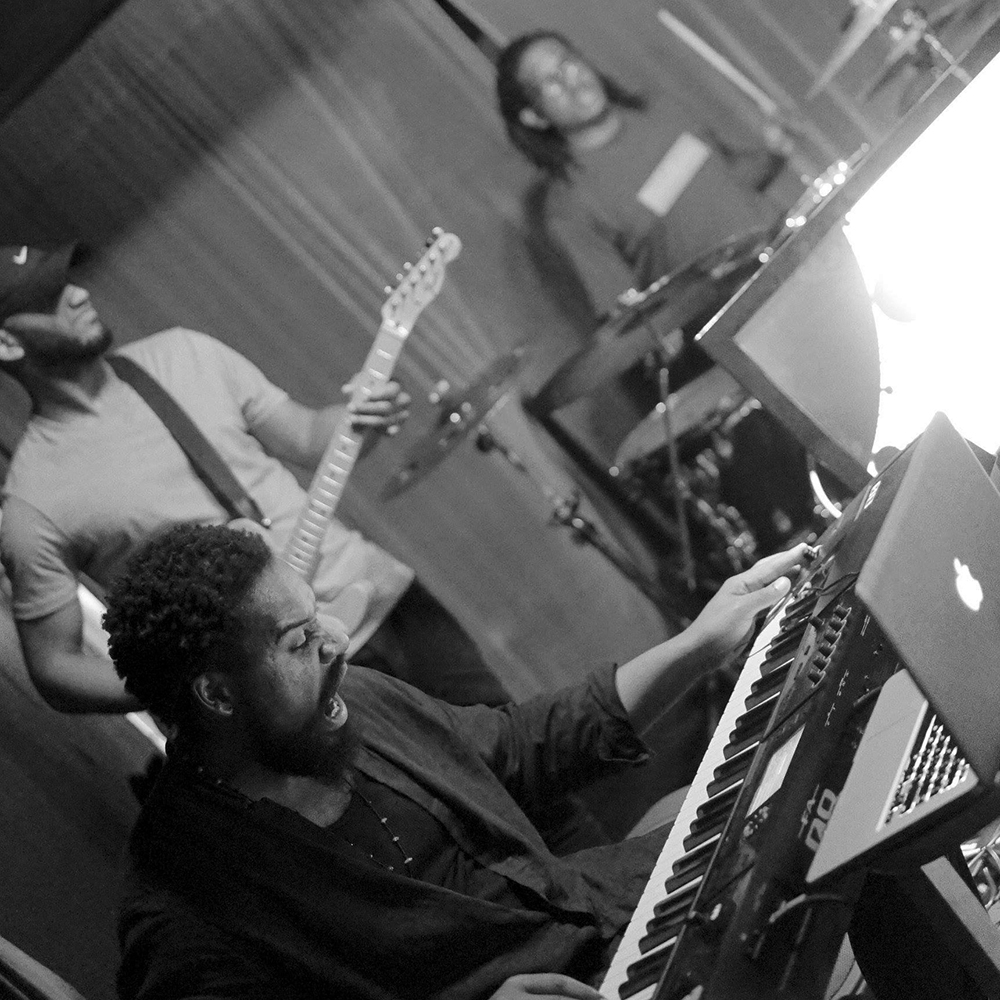 Who all plays on the album with you?

I think I’ve figured out (dynamically) who pairs better with who when we play. I am always open to playing with great musicians. That’s how everyone became part of the band. They were available, and it worked out, but there is a comfort level I have with most of the core players at this point. I feel I don’t go out as far into the deep end with musicians who aren’t part of the movement.

I do believe that the music will be more structured to a degree. What I’m evoking on each album seems to be changing, so with that the music and structure would naturally change. However, I never want to lose the freedom of the music. To me that is what makes it spiritual, it’s listening and following what the energy dictates, not what you thought it would be.

Do you have a desire to produce more composed music rather than pure improvisation? How do you split the difference, and what are your thoughts on the two?

Yes and No. I don’t think I’ll ever be as orchestrated as the Oscar Peterson, Chucho Valdes, and Chick Correa line ups. I love that type of music, but as of now it’s not something that is a part of my incarnation. I trust my soul. It knows more than my brain. My brain can’t read music well, but my soul can speak through the piano.

I think with this album listeners can see the evolution of the songs. They are in some ways more complex, but true to the spirit of the inspiration. I don’t want to write melodies that didn’t come with the inspiration. I feel like one of my favorite bands as a child, Down To The Bone, may be why I’m okay with having a good rhythm and bass making the song instead of Hardbop melodies. They would be grooving for a while, and I would get lost in the grooves.

What is your favorite GEM memory since the band’s inception?

I don’t know if it’s my favorite, but it’s one of the most memorable. We were scheduled to perform for the Crescent Ballroom’s ‘Soul Shabang’ (April 4, 2019), and Teron (the drummer) let me know he was super ill hours before the show. We had actually practiced for the show and had a set list with hits, breaks, and everything. Long story short, I was panicking and contemplated canceling our set. We were calling everyone, and of course no one was free. It was Friday and minutes until showtime. The guys convinced me to play anyway, and Chris Strong ended up coming and setting up like a 3-piece set and we jammed. No one in attendance could tell he [had] never played with us.

That’s why I follow the spirit, because you have to be able to go where it takes you.

I’m hoping for continued success and for the music to continue evolving. Maybe another album. I already have the concept brewing in my head, so we’ll see. I’m content with whatever the universe and the source have in store for the movement.

The Geibral Elisha Movement’s new album Revelation is out now on Spotify and Apple Music. Look out for announcements on their upcoming shows, including their album release show (as of yet unannounced) by following them here on their website, Facebook, and Instagram.