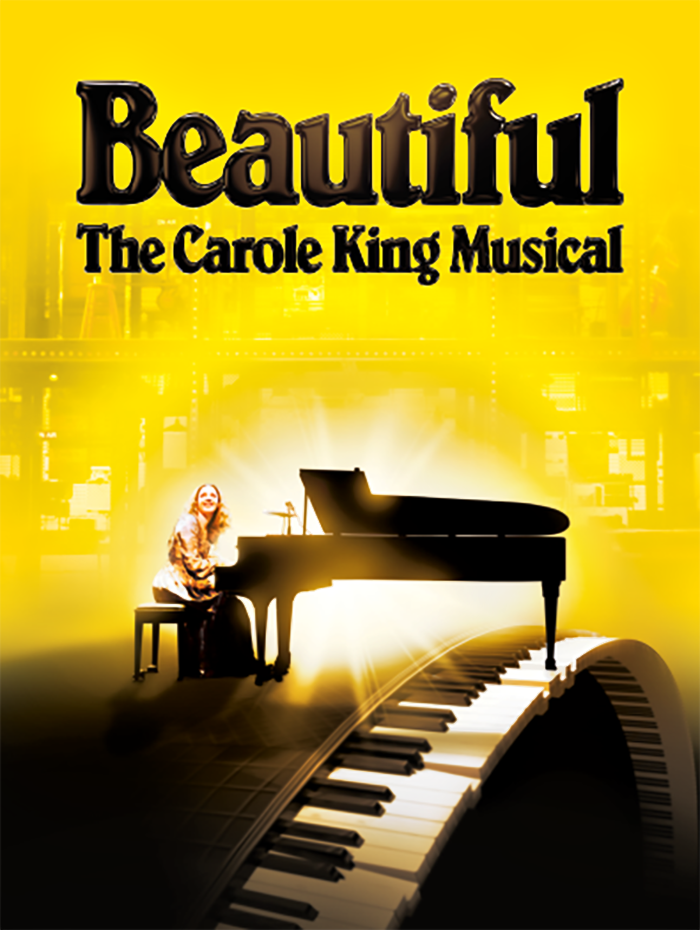 Beautiful: The Carole King Musical is a jukebox show about the singer and songwriter whose extremely successful career spanned decades. First through songs she wrote for others, ultimately culminating in a solo career. Originally premiering on Broadway in January 2014, it received several Tony nominations including Best Musical and Best Book of a Musical. Beautiful played over 2,400 performances at the Stephen Sondheim Theatre, launching its first national tour in 2015, and closing in October 2019.

The show recounts her many contributions to Billboard standards, initially as a writer in collaboration with her husband, Gerry Goffin. Together they created songs such as “Some Kind of Wonderful,” “Will You Love Me Tomorrow,” and “The Locomotion.”

Much of the first Act focuses on the relationship between Carole (Kennedy Caughell) and Gerry (James D. Gish), who met young, married young, and developed an indestructible personal and professional bond. The musical’s format shifts seamlessly from the duo casually sitting at a piano composing, into glitzy performances of iconic songs by the artists that made them famous, such as The Drifters and The Shirelles. We are also introduced to Cynthia Weil (Kathryn Boswell) and Berry Mann (James Michael Lambert), a writing duo who were friends of Carole and Gerry and are responsible for such hits as  “You’ve Lost That Lovin’ Feeling,” and “On Broadway”.

The second act addresses Gerry’s mental illness and the marital struggles that faced the couple as they grew up and grew apart. Throughout the show’s entirety, Carole seems of another time. Trapped. Stifled. While she is surrounded by people in fashionable clothes with stylish haircuts, Carol is hiding in drabness. Always stuck in a world she is living for others. Her mom, her husband, her career of making others famous. As she finally finds her voice, she is freed. Literally letting her hair down. And by the end of the show, as she reaches a pinnacle in her own solo career, she finally fits into the era. Finally freed. Empowered. “A Natural Woman.”

This tour stop included some pretty exceptional performances that are worth highlighting. Kathryn Boswell is fiery, with a rapid cadence that subtly demonstrates Cynthia’s intelligence and strength. And James Michael Lambert has just the right balance of swagger and dumb struck by puppy love. Their chemistry is strong yet strained, just as the text requires. Matthew Amira plays Nick, the long-haired, dopey, comic relief that is so necessary to alleviate some of the weightiness. And Kennedy Caughell is spectacular as Carole. Thick Brooklyn accent, subdued mannerisms, with a voice that makes every note seem effortless.

As enjoyable as this production was, one of the most special moments of the night came after the final bow. During the curtain call, Caughell asked the audience to stay for just a few extra minutes. Then Colleen Jennings-Roggensack, ASU Gammage’s Executive Director, appeared on stage to award James D. Gish (who gave an immensely powerful performance as Gerry) a Rising Star Award. Gish is from Bullhead City, AZ and an ASU Alum. The award honors those who have roots in Arizona and come back to us. The pride and excitement was palpable, onstage and in the audience, as we came together as a community to honor one of our own. It was a very special experience that I am grateful to have been a part of.

Beautiful: The Carole King Musical played a very limited run at ASU Gammage from Feb. 21 through Feb. 23. The tour continues with short stints throughout the south and southwest, with tickets available online. ASU Gammage has much in the pipeline. Next up is the Tony Award winning Once on this Island March 3-8 and Tina Fey’s Mean Girls on April 21-26. The impactful show about the repercussions of 9/11, Come From Away, is scheduled for May 26-31, and The Lion King is slighted for June 17 – July 12. All tickets can be purchased online.