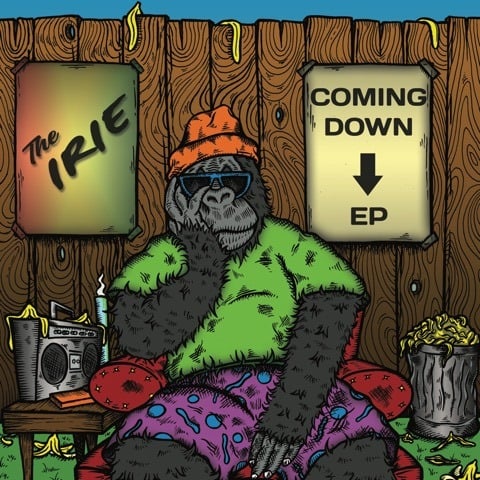 To celebrate the release of their new EP Coming Down, Arizona rock-reggae-pop act, The Irie, have a pretty epic shindig planned.

And rightfully so. Although George Ruiz formed The Irie with family members back in 2012, this current incarnation has only been playing together since the end of last year and they’re already making waves in their new form, in the Valley and beyond. With shows booked from here to SoCal, festival spots, live radio performances, and even their upcoming sponsored release show, The Irie show signs of a band ready to make big moves.

When drummer Johnny Groove moved back to his hometown of Tempe, he soon linked up with George Ruiz and Marcus Mapes. The trio realized they had the right fit together and quickly recorded their first single, “Toxic Love.” That was just the beginning… or, should I say, the new beginning.

Their new EP, Coming Down, is the next natural step to take. Rounding out their sound and offering more of the good vibes, Coming Down is short and sweet and seemingly flies by… the perfect reason to put it on repeat.

But back to the epic release show. Featuring 7 full bands, at least 3 additional acoustic acts, live art, and even a $300 cajon raffle by Bangbox Percussion, this all day affair is sure to be hopping. And these are no third-string bands. Breezy The Band, Terra Fractal, Desert Fish (Tucson,) Sunset Voodoo, mob vs. ballot box, and Ease Up (Los Angeles) are all scheduled to perform. Acoustic performances by Joey Gutos, Zach & C-Los of ZeeCeeKeely, and Stilly & Philly from Black Bottom Lighters are sure to be a blast.

I wanted to find out more about The Irie and their new album so I reached out to Johnny Groove and he graciously answered my questions. Find out more about Coming Down and read what’s upcoming for The Irie in the full interview below.

YabYum: So, who is officially in The Irie and how did you guys start playing together?

Johnny Groove: Officially in The Irie is George Ruiz (Vocals, Guitar), Johnny Groove (Drums, Percussion), Marcus Mapes (Bass Guitar). Officially we started playing together in October. George, Johnny, and Marcus met at a show together and hit it off from there.

What is your songwriting process like? Does one person come up with the song ideas and then the band fleshes them out or do you all write collaboratively?

Our songwriting process starts with George making up a melody and taking it to the band, we all create and structure the song together after the melody or idea comes to the table. It is half and half, usually George will start with an idea and we will take it from there.

There’s some great trumpet on “Crazy” and “Radio” along with what I believe is melodica on “Carry On”. Are these special guests or are these instruments played by you guys as well?

The trumpet and melodica are played by Danny Torgersen. He is a special guest on our EP, as well as contributing member of The Irie when he is not busy touring with other acts that are friends (Badfish Tribute Band, Fayuca, Mouse Powell, and Danny’s front man band Captain Squeegee).

Where did you record Coming Down? It’s sound great. Is it the same place your first single, “Toxic Love” was recorded at?

Thank you!! We recorded our EP and “Toxic Love” here in Arizona with Matt Keller. Matt Keller is an amazing studio engineer, producer, and musician. He has recorded some of the best local acts like Authority Zero, Katastro, The Veragroove, Fayuca, and many others.

With “irie” generally meaning “nice, good, or pleasing” or “to be at total peace with your current state of being the way you feel when you have no worries” is there a general message behind the band that follows this idea?

Yes, the message is exactly what the meaning is “to be at total peace with your current state of being the way you feel when you have no worries”. Irie to us is people having their own “Irie”, whatever makes them feel good, because people always have a different perception of being Irie.

I feel like the music corresponds with this; however, I was just curious if you would like to speak more about this… Are you or your band-mates’ practitioners of Rastafarianism?

We are not practitioners of Rastafarianism, even though our bass player Marcus smokes like he is haha, but we love the culture of Rastafarianism and what it stands for. Irie to us is whatever makes you feel the great, being center, being happy, and feeling at peace in your current state!

Were there any hurdles or things you had to overcome in forming The Irie and recording Coming Down?

George Ruiz started The Irie in high school, he went through many different bass players and drummers, until he met [me]. After meeting, they found Marcus Mapes. The Irie found its perfect fit. So, there were some hurdles to overcome for George in the beginning. Recording Coming Down was smooth sailing for us. Marcus was just joining the band, so our producer and music engineer actually played bass guitar and keys for the EP. We are very fortunate and blessed to have such a great engineer working with us and Danny T. as well doing harmonies and trumpet.

How about some of your favorite influences musical and otherwise that helped shaped The Irie’s sound?

One major musical influence for all of us would be SUBLIME, we are not talking about Sublime with Rome, we are talking about Bradley Nowell, they real sublime. We still to this day all watch old school videos of sublime before they were even big jamming’ up parties in the backyard.

Please tell us about the release show on Feb. 8. Who is playing it, where is it, and what should we expect?

Man, oh man, February 8th is going to be a real treat. The lineup is Ease Up from L.A, Mob vs Ballot Box, Sunset Voodoo, Terra Fractal, Rio Grande, Desert Fish (Tucson), Breezy The Band (Chad Rubin). Acoustic Stage we have Stilly & Philly from Black Bottom Lighters, Zach & C-Los of Zeeceekeely, and Sam Wiley from The Wiley One. We are also having live art from Keri Ercolini, and we are also excited to announce Bangbox Percussion will be presenting a $300 Cajon for a raffle. Bangbox percussion sponsors the best reggae bands through the United States like Slightly Stoopid, Soja, The Dirty Heads, Rebelution, and many more.

What’s upcoming for The Irie?

The Irie is doing a 4-show run w/ EASE UP in California-AZ before their EP Release Party at Wasted Grain February 8th!

The Irie will be doing a couple shows after the CD Release in their hometown and Mexico.

Will there be more music soon?

After our California shows we are going into the studio to record two brand new songs with Matt Keller. We are excited to get back in the studio, it’s an addiction to us.

For more info and tickets to The Irie’s Coming Down release show on Feb. 8 from 3-11 PM, head here.