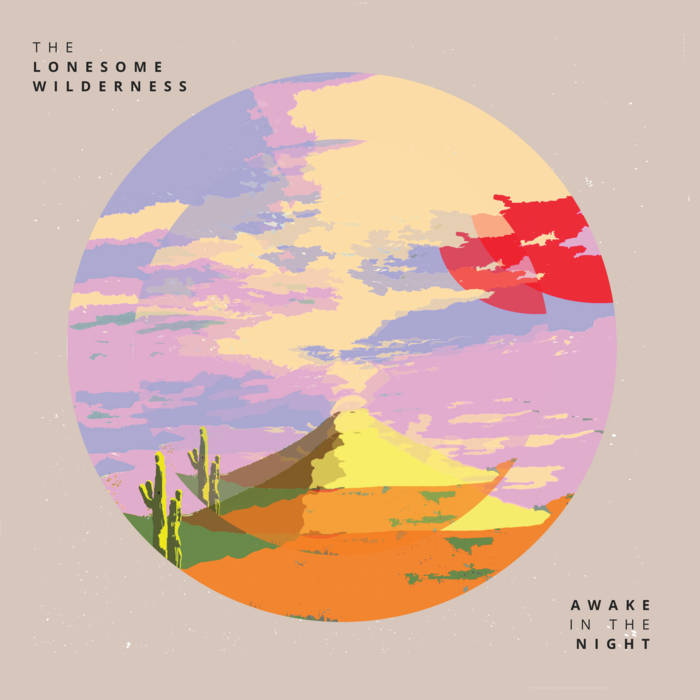 The Lonesome Wilderness have released their third, and best, album to date – Awake in the Night. YabYum has been covering The LW since they’re beginnings so I’m certainly glad to see Andrea, Brian, Joe, and Paul haven’t slacked off in the half-plus decade they’ve been playing together…

Nay, far from it. The horizon has broadened for these southwestern dust devils. Not confined to simply one region, the music encompasses in sound our sea to shining sea with everything in between. While still keeping that layer of SW grit of course.

The album opens with “Day/Night”, setting the tone for the tempered psychedelia that is to come, before launching right into “Webs”, a sleepy, dream-pop number that sets a solid pace for the rest album without giving everything away. The first single from Awake in the Night, “(SO) Easy”, follows next, ratcheting up the tempo and hearkening back to earlier Lonesome Wilderness with its jangly, western, surf inspired riff before the guitars go full on shoegaze and send this track soaring.

Title track and second single “Awake in the Night” arrives next and it’s at this point in the album where I truly realized how much this band has grown over the years. Joe gently delivers on the verse and then passionately strains his vocals on the chorus: “And I know why/ You’ve been feeling so stoned awake in the night/ And I try oh how I tried/ To get back to that feeling but the feeling had died.”

My only negative critique of Awake in the Night is that when listening to it, the songs — and more importantly, how the songs physically sound — begin to run together. Treading the line of both defining your band’s sound and not sounding monotonous is a hard tightrope to traverse and, ultimately, The Lonesome Wilderness achieve this hard, sought after goal. Incorporating new ideas into the music certainly does help. And, with that said, I do wish the album was longer to fully realize the new scope of sound the band presents here.

I wanted to find out more about Awake in the Night so I contacted lead singer/songwriter Joe Golfen with some questions and he graciously answered. Read on for the full interview to find out how this album was put together and what’s upcoming for the band…

Mark Anderson: I feel that this is the best Lonesome Wilderness album yet and I thoroughly enjoyed your two EPs before this.. Is there anything about your songwriting process that’s changed since your previous records? Or has playing with the same folx for over 5 years simply made the execution of your songs all the better?

Joe Golfen: So glad you like it, we’re really proud of it!  I think playing together for all these years has definitely made an impact on the sound. We’ve developed our own kind of sound over time, and we also really pushed ourselves to try new things on this record. Some of these songs have been around for a long time, including “Desert Sun” which we originally recorded for our first EP but didn’t release.

I think the main thing that really changed with this record is that we took our time with it and let the songs grow and take shape. A song like “Thought on the Stairs” is one we’ve been experimenting with for years, and I’m really happy with the way it finally came together.

Songs like “Rolling Rock” and “Black Smoke Clouds” expand The LW sound while keeping the band’s roots firm in the dirt. Who are some of the songwriter’s you’ve been listening to that have inspired these new sounds? (I also noticed you created an “Awake In The Night Mood Board” playlist on Spotify which I think is an awesome idea and may actually answer my own question…)

Those two songs really came out of the desire to try new musical ideas, whether it was the minimal fingerpicking or the military beat. I’ve always been a big fan of folky music, going back to listening to Bob Dylan when I was a kid, so a lot of that comes through. But we’ve also been getting more and more entrenched in psychedelic music, especially with bands like King Gizzard, Elephant Stone and Woods.

But yes, that Spotify list is truly a list of things that seeped into our sound for years, consciously or unconsciously, from classic REM jangle and ambient Brian Eno, to newer stuff like Parquet Courts and Big Thief.

Where and who did you record this album with? It sounds great!

We recorded with Ari Leopold at Lava Lake Studio. Ari has been a friend for years, and he’s done some amazing recordings with Paper Foxes, I Am Hologram and many more. We first went in with him to record our song for the When in AZ, Vol 2 comp, which we did live and finished in a few days. It turned out so great that we went right back in to start recording an EP.

Originally we were going to do a few songs live and get it done quick, but me and my wife  Andrea (bass player) learned we were expecting a baby right around that time, so the focus shifted to making a longer album that was more crafted and thoughtful. We did a lot of recording while Andrea was pregnant and have been working on it since, so it was a very long process!

I also enjoy the way the album begins with “Day/Night” and closes with “Exit Loop”; short, instrumental pieces with plenty of feedback that I feel start and end the album appropriately and thoughtfully. Who came up with this idea?

That idea came out of messing around with the end of “Webs,” which we wanted to have a sort of dissolving, looping ending. Ari has an old, kind-of broken tape delay that we ran the guitars through to get that feedback effect. It was so cool, we decided to make a few more to start the record. Because this album was recorded over such a long time, we wanted to make sure that it sounded cohesive and part of a whole, and they big echo delay became a glue that held everything together.  Also a big theme of this record is change and transitions, so we thought those bleery, experiment tracks were a good way of bookending all the feelings and thoughts between.

What was the most challenging thing about making Awake in the Night? How about the easiest?

As I mentioned, Andrea and I became parents midway through recording the record, so things got put on hold for a long while. But Ari was incredibly generous with his time and really worked with all of our weird work and personal schedules. And he really made it a fun time, especially for a project that could have felt like it dragged on too long, he was always up to try new things or even just recording a few more songs. “Rolling Rock” and “Thought on the Stairs” was really last minute additions, and I’m so glad he pushed us to work on them.

Can you tell us a little about the album release show that took place on January 10? Any moments or surprises that you care to recall?

The release was such a perfect show – We got to play with some great bands and good friends in decker. and Mr. Mudd & Mr. Gold, and the crowd was so engaging and excited about the new songs. I was a little worried because the new stuff is a lot quieter than our old songs, but everyone was so open and ready to listen. Couldn’t have asked for more. 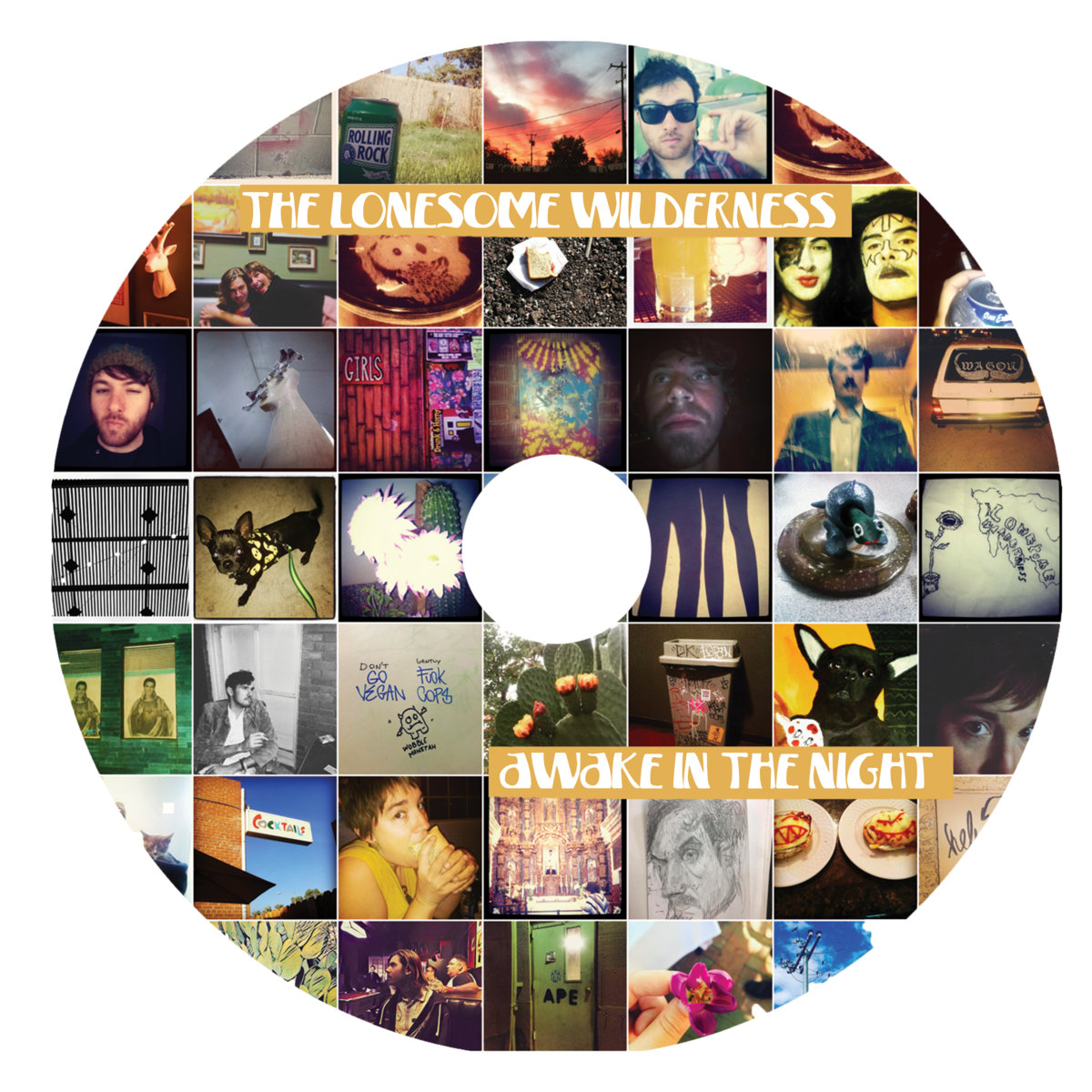 Who did the album artwork? I love it.

My brother, and our guitarist, Paul did that artwork, and he and I designed the cover together from there. I also really love the design on the CD itself, which Andrea thought of. We put a lot of work into the art and we wanted it to have the right feel for the record; something deserty and a little psychedelic, with nods to the record designs of the past. I always think of great album covers being the same “color” as the music, and that pinkish brown really captured what we were going for.  The CD art also captures some of the nostalgic feel of some of the songs, since a lot of those photos go back a few years.

What’s next for The Lonesome Wilderness camp? Shows? Tours? Are you constantly writing new songs or do you take a break to focus in on the new songs and executing them live?

We are setting up a few shows coming up around town and hopefully we can do a few out of town dates this summer, hoping to hit Tucson and Flagstaff and hopefully a few California dates. I have some new songs ready to go, but we’ll probably keep refining the live show.