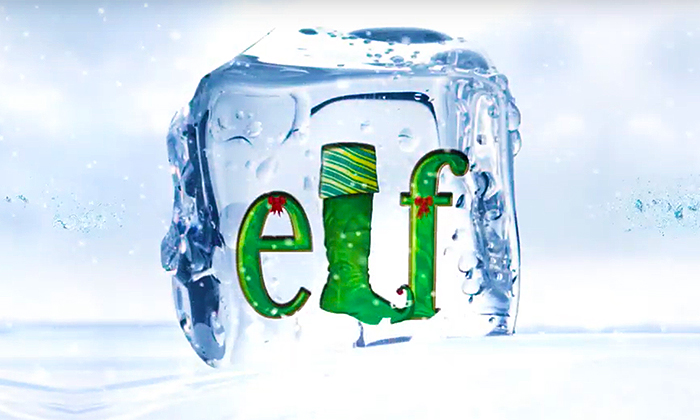 Elf: The Musical is a stage adaptation of the family classic about Buddy the elf, who ventures out from the North Pole to The Big Apple to find his real father. It is a recreation of the iconic Will Farrell comedy known and beloved by so many. Inspired by, but not a duplication thereof. The same story told through the eyes and voices of different storytellers, using different methods, including really catchy songs. Thankfully maintaining most of the film’s best jokes, and all of the heart that makes the original so compelling.

The set is vibrant and efficient, with roll-on and roll-off pieces that allow scenes to quickly shift from Santa’s workshop, to the Greenway office in the Empire State Building. Macy’s to the Hobbs’ Manhattan apartment. The drops are in stacked layers, framing the stage in a transparent semicircle. Considering the significance of the snowglobe, it was quite brilliant to stage the entire show within the confines of a snowdome.

The costumes aid significantly in setting tone. Bright primary colors saturate the the North Pole, while cityfolk are in dark stuffy suits, fitted coats, high heels and boots. Thanks to some charming trickery, and pointed shoes, the elves are just the right height. And Santa’s suit is absolutely impeccable. Especially his coat, adorned with intricate gold stitching, glimmers under the lights of Central Park.

Santa is the narrator and the self-aware comedian. As the only character who knows both, he is the intermediary between worlds. Rob Watson gives an effortless performance, delivering every punchline as if for the very first time. Justin Emmanuel Parker is also thoroughly humorous as the paranoid manager of Macy’s department store, as is Hanna Clark Levine as Walter’s plucky administrative assistant Deb.

Some of the most touching moments of the show are between Michael and his mother, who are struggling to stir Walter back into awareness. Tristan Klaphake gives a solid and believable performance as young Michael, and Carolyn McPhee’s portrayal of Emily, the invisible wife desperately trying to prevent the same fate for her son, is quite charming.

Madison Cichon’s interpretation of Jovie is aggressively jaded with an optimistic layer buried underneath, desperate to be realized. Luckily, Buddy finds his way there almost immediately.

The performance I experienced had Tyler Pirrung in the role of Buddy, rather than Adam Vargas. Though some are prone to disappointment by an understudy announcement, I adore the magic that comes with seeing an understudy in a lead role. They often bring an “I am not throwing away my shot” vigor, and Pirrung was definitely bringing it. Man, what a voice! Buddy is simple, but not without complexity. With the innocence of a young child and the wisdom of an old soul. He makes us laugh, for sure. But he also sums up what makes Christmas so special in a few profound, and perfectly delivered, sentences.

Elf: The Musical is not just a show, but an experience. A celebration of the holidays. And you can feel it almost tangibly. The theatre was full of colorful christmas sweaters and elf hats adorning people of all ages. It is a show that provides ample opportunities for laughter, memorable and festive music, several fabulously choreographed numbers, and a joyous spirit that will stick with you after the final curtain call.

Elf: The Musical is playing at Arizona Broadway Theatre until December 29. Tickets can be purchased online. I recommend getting meal & show tickets, to allow for the full experience of this unique venue. The spaghetti and maple syrup dessert (funnel cake topped with cherry compote and maple syrup) is fabulous! And if you are struggling to get the perfect gift for that person who has everything, there are Holiday Packages still available. Call the box office at 623.776.8400 for additional details.