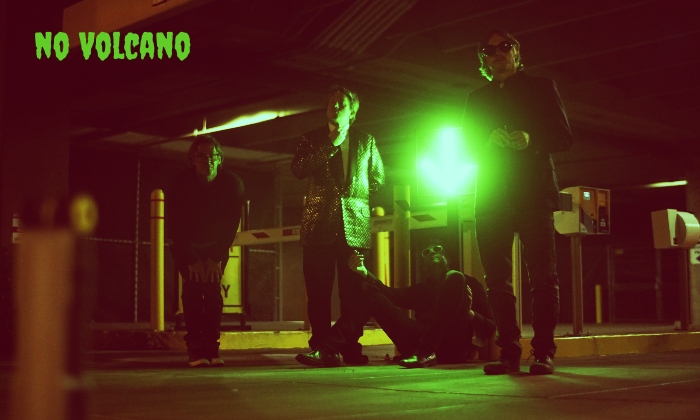 Phoenix’s psych rock superstars No Volcano just released their new music video this week! “Extrovert” is a new single from the band’s forthcoming album, Rubber Dagger, and for this music video the band teamed up with Tucson filmmaker/animator Jason Willis. We had a chance to talk with Jim Andreas from No Volcano and music video director, Jason Willis, to get a behind-the-scenes look at the making of “Extrovert” and learn a bit more about the forthcoming album! Read our Q&A below, but first, check out “Extrovert”.

And don’t forget to make plans to be at the release show for Rubber Dagger November 30th at Valley Bar on with Snake! Snake! Snakes! and JJCnV!!

New No Volcano album on the horizon. That’s exciting! Tell me everything… What’s it called? Where did you record it?

Jim Andreas: The new record is called Rubber Dagger. I came up with the name when I saw a photo of an old advert for a toy (rubber dagger) in the back pages of a comic book and I like the way it sounded so I wrote it down. When we were trying to think of a name for the new record it was the first thing I suggested, and everyone liked it which is kind of rare. Our drummer, Chris Kennedy, has recorded all 4 records in our practice space (spare bedroom of his house). Chris has turned into an amazing engineer and producer over the last 5 years, it is so great working with him! I have total faith in his vision for the songs, and ability to achieve that in the mixes. It is also really great to be able to hear the work in progress and make edits in mixes right up till the very end.

The band has been putting out albums rather steadily since its inception. Do you have a songwriting routine that you adhere to?

Jim: I love writing songs [and] it is my favorite part of being in a band, and Chris writes songs too. So by the time we have finished a record we usually have enough songs for the next one. We are very project oriented so typically we sit on any new material until the record is recorded and mixed then we start to work on the rough ideas together as a band. Then start the whole process again.

Any unexpected challenges during the construction of the new album?

Jim: The biggest challenge during the process of making this record was finding a new guitarist. Our original guitarist Jeremy Randall left the band just as we had wrapped up writing the songs for Rubber Dagger. He decided to go to Nursing School and felt he didn’t have time to continue with the band. Jeremy is a talented and unique guitar player so it was a challenge to find a replacement. Luckily we found a really great guitarist and super cool dude to join the band, his name is William Goethe. I love the enthusiasm, creativity and dedication he brings to the band, and I think his guitar work on Rubber Dagger is really great, very innovative.

Any special guests appear on the new album?

Jim: We do have a special guest on this record. Lonna Kelley signs on the song “Golden”. I am so psyched she agreed to be on the record! I love her music and her voice and the song sounds great! We are working on a video for that song too that will come out in a month or so.

This is your third time working with Jason Willis on music videos. What is it about his aesthetic that you feel really fits the No Volcano sound?

Jim: I have a friend who knows Jason and when she saw the videos we did off the first record she contacted me and said I know this guy who who makes really cool films you should check out his work . She sent me a link to his website and I was blown away! He made videos that look exactly like what I would do if I could. I contacted him and he was really cool and into the idea doing a video for us. I sent him the song “Blackout” and he nailed it! The look and style is perfect for the song. He really understands how to turn a song into a visual and capture the vibe of the song and band in the video. I think Jason and I lean towards trippy shit , maybe we both did too much acid when we were younger.

Okay, now please tell me about the release show. Where is it? Who’s on the bill? Will there be a lazer show?

Jim: The release show is on Saturday November 30th at Valley Bar with Snake! Snake! Snakes! and JJCnV. I didn’t plan on having a lazer light-show, but since you brought it up I might see if I can make that happen. If nothing else you will see all my Halloween decorations from this year make an appearance on stage.

What was the inspiration for the visual narrative in this video?

Jason Willis: It was kind of a combo between visualizing the different-yet-similar patterns that we all find ourselves trudging through in life while also playing off of the lyrics in the song. Plus that guitar sound was so good, heavy and crunchy, that it was just crying out for an inter-dimensional rhino stomping around, right? You just close your eyes and WHAM! There he is.

This video appears to incorporate animation and collage. Can you tell me a bit about the process of making this music video?

Jason: Ah, hah! You are exactly right. I really wanted to incorporate a collage vibe because, if you follow the various No Volcano social media accounts, you’ll see a huge array of super cool collage pieces that the band has put out there, so it seemed appropriate to include some elements from that visual sensibility. In fact, the last video that we did together (“Day in the Sun” off of their Envy in the Valley release) used a bunch of actual imagery from Jim‘s collage work, so this one is a bit more of an abstract nod I guess.

Process-wise I started with the initial rhino story line, and that was all built using Cinema 4D. This is where I created the characters, manufactured the various environments, timed out the camera moves, etc. Then I took that footage and further treated and tricked it out in After Effects – this is where things like the color processing and depth of field stuff went down. As that was starting to gel, the band sent me some cell phone footage with each of the guys playing their respective parts of the song. I took that footage, extracted the players from the background, and then janked it all out using After Effects. Messing with frame rates, adding animation, tweaking the textures, etc, etc. Finally, I reassembled everything with all of that processing in place and merged the various elements together.

Looking at some of your other work, you have such a strange (and amazing) and strongly defined artistic sense of self. What are some of the things (or people) that helped you defined your aesthetic?

Jason: Thanks! For the majority of my life I guess I’ve been pretty attracted to almost any kind of art where passion tops precision. I’ve just never been very attracted to (or interested in) simple technical virtuosity when it comes to the stuff I consume. When there’s too much polish or gloss, part of me tends to check out. This means that my head has generally been a blender full of surrealism, crude/utilitarian/outsider imagery of all stripes, arthouse/drive-in/horror/industrial films, old comic book ads, and a slew of the usual weirdo pop culture nonsense that can’t help but seep in. Still, the single biggest turning point for me was probably punk rock in the early 80’s; I just can’t overestimate the impact there. From the messed-up aesthetic itself to the simple realization that pretty much anything counted as being artistically valid just as long as it moved me, that whole scene changed my life.

Do you find that it’s harder/easier/more fun/less fun working on a music video than on other video projects? And why?

You know, I actually really DO enjoy working on music videos – you can play with just about any style or narrative that you want, bands are generally open to whatever might get thrown at them, and from a technical standpoint the edits tend to create themselves when you work them against the song. I’ve also probably been really lucky in terms of the bands that I’ve been able to work with – I really can’t think of a single client who was overly hung up or pointlessly picky when it came to the final product.

Any current or upcoming projects you have in the works that you’d care to mention?

Yes! A friend and I are working on a feature-length documentary about Target Video that has been a tremendous amount of fun. Target Video was a San Francisco based studio who managed to capture some astounding early footage of bands like the Screamers, the Cramps, Flipper, Black Flag, Crime, the Suburban Lawns, the Avengers, Devo, Chrome – just a crazily impressive roster. They were also real pioneers when it came to actually distributing their content, and this meant that as a little kid growing up in Lawrence, KS in the early 80’s, I was able to see some insane and amazing stuff that would never have come my way otherwise. Very winning combination of art and technology.

Do you have a favorite No Volcano song?

Hah! Well you know that thing I said earlier about how much I enjoy working on music videos? One of the only potential downsides is that if you’re NOT really into the song itself… well, it’s still gonna be imprinted on your DNA by the time you’ve finished the final edit. However, when it comes to No Volcano, I have no regrets. ALL GOLD! 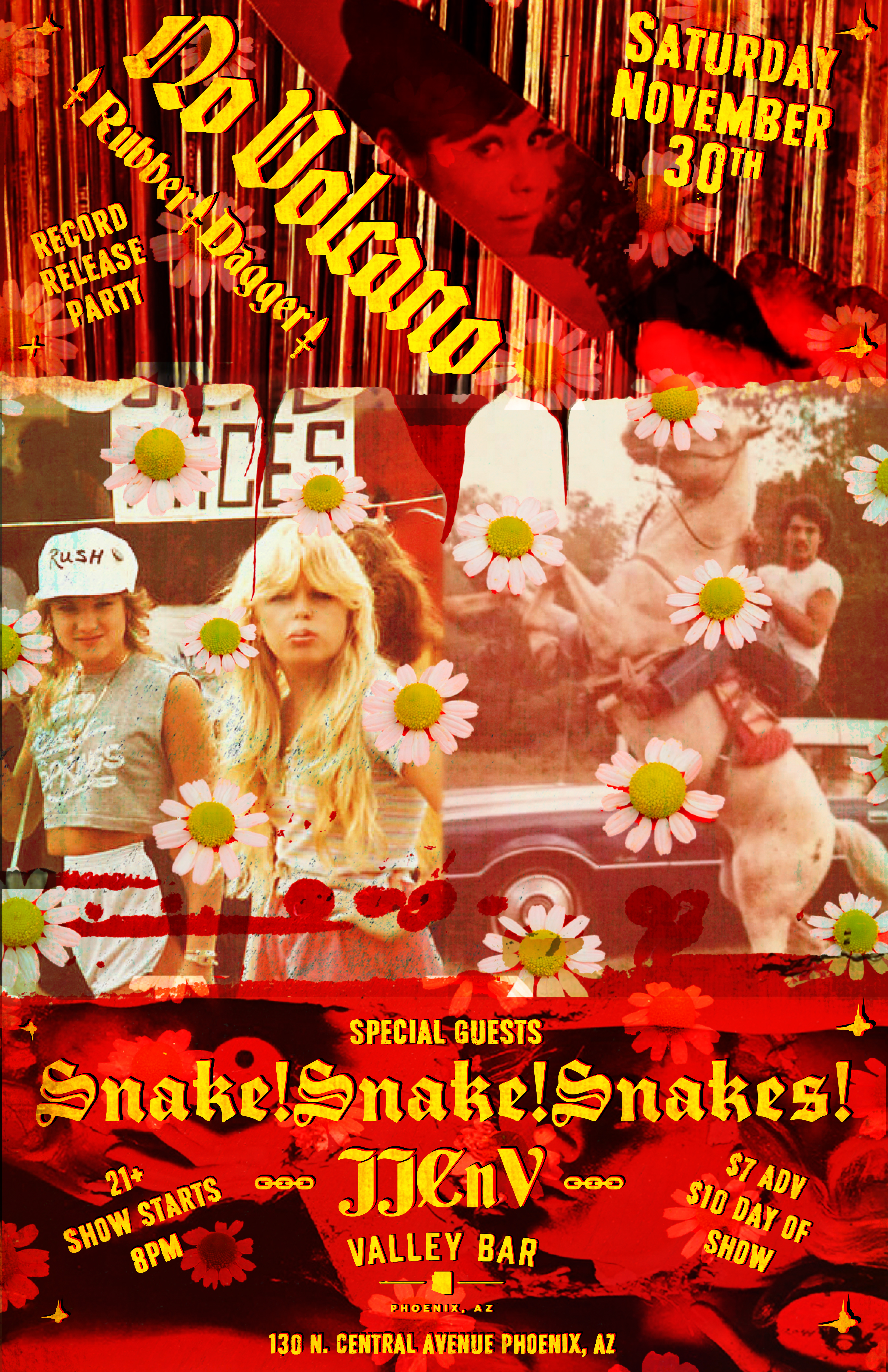