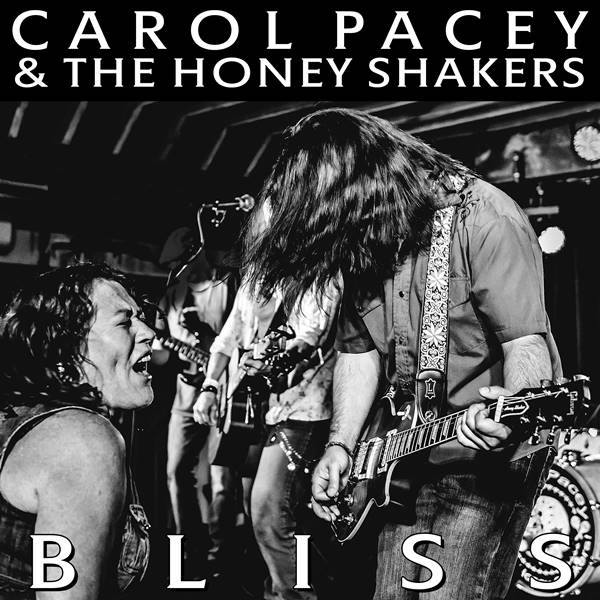 Carol Pacey & the Honey Shakers have long been a staple of the local rock scene. And, with the release of Bliss earlier this year, the band shows no signs of slowing. Pacey and her brood of Honey Shakers have a classic-meets-contemporary rocknroll sound that feels right at home here in Tempe. And, best of all, the band brings an infectious energy to all their live performances which has established them as a fan favorite here in town.

Of course, it’s hard to wrangle Carol in her constant moving and honey shaking, but we managed to pin her down (with guitarist Andy Borunda’s help) to talk about Bliss, songwriting, cover songs, and more! Read our Q&A below and maybe give this single from Bliss a spin while you’re reading….

Let me start by asking who are the Honey Shakers? Any guest appearances on the new album?

Andy Borunda: The Honey Shakers are [me] on lead guitar, Benno Deluca on drums, and Will Gantry on bass. On the new album, Dante Fiorenza played bass. For Bliss, we invited Amanda Lubking on violin who plays for Cockswain and she appears on “Whisper My Name.” Bob Corritore, owner of the Rhythm Room, laid down the harmonica on “I’m Gone (Stupid Clown).” Danny Torgersen of Captain Squeegee played trumpet on “Add It Up” and “Plan B,” and he played organ as well as arranged and performed choir vocals on “Somewhere Beautiful.” Our recording engineer, Joe Asselin, performed choir vocals on “Somewhere Beautiful” as well as tambourine.

Speaking of, new album came out in September. Where did you record Bliss?

Andy: Bliss was recorded at Switchblade Sound in Tempe where our previous albums, Yeah Yeah Yeah and Eyes on the Prize were recorded. It is owned and operated by Joe Asselin who has talent and patience and is great to work with due to his nature. We are very fortunate to have developed this relationship with such an awesome human being.

Carol Pacey: Every record brought us all improved studio and production skills, and this record is the best so far; I am very proud of it. A huge part of this record’s appeal is in its mastering quality. We used a new engineer this record, Nathan James at Vault Mastering, and we could not be more pleased.

For an album titled Bliss, there seems to be a lot of death references. Specifically, there are three in the track titles and I don’t even know how many tucked into the lyrics. But this album also talks a lot about love and hope and determination. As the songwriter, what’s been on your mind lately that surfaced in the lyrics on this album?

Carol: What has not been on my mind is more the question. Some of these songs are older than others with one dating back to 2008 so lots of life, and death, happened between then and now. I can say that I have a new, joyful lease on life these days and that every day is a good day with some days better than others.

Since we’re on the topic, can you tell me a little bit more about the songwriting process for the band? Do you compose lyrics &/or melody and take it to the band to help flesh out? Or are you more like a maniacal conductor that arrives with complete notation and staunch demands?

Andy: Carol writes the songs—acoustic guitar with lyrics, melody and arrangement pretty much fleshed out. She then sends me an MP3, or she will call me and say, “Hey, bring your guitar over.” I like to listen in person first because she will often hear things in her head that she wants me to try to play, e.g., “make it more grrrr” or “you should do a reeearrww sound.” Funny and true! That is when I will take the song and put an electric guitar touch to it that allows more of a direction of where the song will go when Ben and Will have the chance tackle it.

Carol: What Andy said plus sometimes I do have staunch demands for more “grrrrr.”

Okay, I want to talk about the album cover for Bliss because I love it so much. Rather than putting yourself front and center, the focus seems to be on your lead guitarist and one of the Valley’s leading music supports. I feel it really captures the live show energy that makes Carol Pacey & the Honey Shakers one of the local rock n roll favorites. Who took the picture and who decided it should be the album cover?

Andy: Rachael Smith of Ray Squared Productions captured this shot of us at one of our shows. She has a naturally great eye and we were fortunate that she captured this moment that says so much. Carol knew how special this picture was and wanted to do something with it, so it became the album cover. We are a band that loves to tear it up live and when we can receive that enthusiasm and joy coming right back at us…I mean…bliss, right?

Carol: First off, thank you and I am glad that you love the album cover. We have morphed a lot as a band, upping our energy level as our performance level increased, and it shows in our photos. I tell people after our shows, as I wipe eye makeup off my cheeks, that if we are not hot and sweaty messes when we exit the stage then we did not work hard enough. As for the photo, that night at Valley Bar in 2016 was an epic night of music when we played the Banter, Whitherward and Ghost Cat Attack, and when Rachel shared that photo with me, I knew instantly it would be the cover of the album; it was perfect! Other people have also noted that I am not on the cover and they find that odd. To me, it does not matter in the slightest. The back cover of the vinyl record and back cover of the CD insert is a photo by David Majure, taken at Tempe History Museum earlier this year. When I saw his photo, I felt it too reflected a feeling of bliss.

So the cover of “Add It Up” is awesome and it’s a favorite track of mine. There’s a great Honey Shakers spin on the original. The band has an Americana-Rock sound that I feel is the best antidote to that barroom brawl energy so many of us seem to carry around these days. What are some of the influences you (or the band) draw from in crafting your sound?

Andy: I think our sound comes from us being ourselves while at the same time listening to each other to create something nicely cohesive. I think Ben, Will, and I have lots of the same rock influences as Led Zeppelin, Aerosmith, Guns and Roses, Sabbath, and the Beatles, but Carol and I share a love of the Replacements. Ben and Will seem to know these weird tunes they always jam on. It is always Rush or some tv show theme song lol… I do believe Carol used to often sing to the Carpenters, Violent Femmes, and maybe even the Chili Peppers. We all have quite the fondness for those Refreshments’ albums too.

Carol: Thank you very much. It is one of my favorites too. I do not know how our “sound” came about, but clearly it is very much ours. Andy and I have been playing together since 2011, Benno joined us in 2012, then Dante in 2013 who was then replaced by Will in 2018 so maybe it is due to time served. Everybody in the band brings their own influences, and then when we invite guest Honey Shakers to perform on our records, they bring their influences as well and they get the same free range to create within what is already recorded. Some receive the music in advance, but others prefer to hear it the first time at the recording studio. I give a bit of direction of what I would like to hear, but that is it; their parts are theirs. Watching Danny create is amazing, every time.

Anyone who lives here (and takes part in the local music scene) knows that the Phoenix Metro Area is secretly just one giant small town, so I’ve run into you out in the world a few times and you always seem to be wearing different hats. From mother and musician to radio show host and protector of wildlife. How do you manage a work-life-music balance? Is there such a thing?

Carol: Some days I do not sleep, and rarely do I watch television for any length of time anymore. I am so grateful for opportunities in all those areas you mention that that is what keeps me going.

Bliss is a really great breakup album. Did heartbreak strike? Or lost love just an eternal well that we’ve all experienced and can draw from?

Carol: Again, thank you. I think that is an interesting take on the music as it was not a goal; it is just how the songs for this record worked out. My heart was broken a long time ago and then continuously broken over the years since so sometimes I draw on that, and at the same time, I am always looking for the brighter side.

Why did you decide to call the album Bliss?

Carol: We already planned for a song titled “Bliss (The Dead Cat Song)” for this record, and then when I saw the cover picture, I knew the album should be titled Bliss. Music is as much of a feeling as it is sound, and Graciela, our cover star, embodies bliss in that photo as she does every time at our shows.

Did the cat really die?

Carol: Fortunately for the cat, no. I love expressions and decided to spin, “Curiosity killed the cat,” albeit a very weird spin.

What’s next for the band? Big shows coming up? Do you take a break after releasing an album or launch right into working on the next project?

Andy: Why break from something that brings us so much happiness? Plus, we do not have to “stop to write an album” as some bands do. There are a lot more of songs that have been waiting for us to return to, polish and play; I know they will soon-to-be gems! We keep playing—as a full band and as a duo. Adventuring to new towns and new states as schedules permit, and we have a very fun and exciting fall planned with some exciting shows!