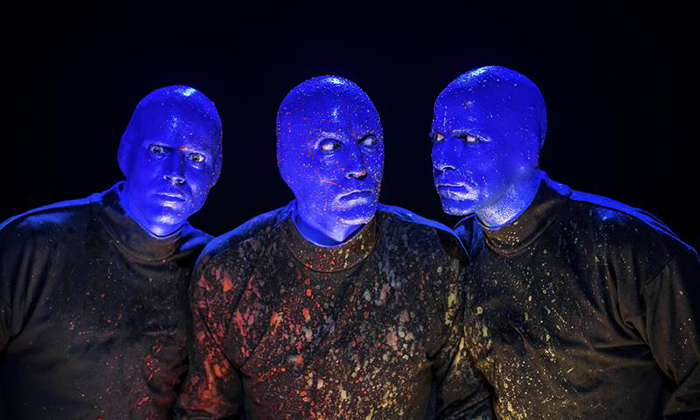 My introductory encounter with the Blue Men occurred on my first trip to New York City when I was in high school. The show was unlike anything I had ever encountered. Pervasive, insightful and rather mind-blowing. When I experienced it again, over a decade later, it felt like I was essentially seeing the same show. Everything my memory retained was showcased gloriously, and I delighted in the nostalgia of it. But it didn’t feel like it had evolved. That has changed with the Speechless tour.

While they certainly pay homage to the iconic bits in the group’s history, intentionally making time to explore and honor each, most are only touched on. Showing quick reverie before moving on to new and bigger instruments, within an intricate mechanical set with immersive projection and lighting, accompanied by a live backup band to help fill the space with deep pulsating vibrato. While still recognizable, it is undeniably a new Blue Man Group.

Blue Man Group was established in the late 1980s by a trio of college friends with aspirations of creating something they were passionate about, rather than succumbing to the corporate grind. Beginning as street performances, with Chris Wink, Matt Goldman, and Phil Stanton burning and  destroying relics that represented the lowest lows of the 80s. As their cultural relevance expanded, Blue Man Group moved into the Off-Broadway Astor Place Theatre in 1991, where they remain today. Since opening in New York, the blue men have performed all over the country, and all over the world.

It is challenging to describe, especially for anyone who has never experienced it. Fundamentally, Blue Man Group is a performance art piece buttressed by insanely impressive percussion work, akin to Stomp. Yet something altogether different. Part arena rock concert, part planetarium light show, part amusing pantomime, with just enough audience participation sprinkled in to make it entirely communal.

The Blue Men make mind-blowing magic with their amalgam of sound, vibration, commentary, and technology. To describe it much further would take some luster off the gem. Spoil some of the surprises that make this show so special. What I will say is that everyone should experience it at least once. Appropriate for all ages, and consumable in unique and special ways. The Blue Men do not speak, so there are no language barriers. And as someone close to the deaf and hard of hearing community, I appreciate that it can be seen and felt and experienced in its pure form.

Blue Man Group is a franchise with hubs all over the country, so they are not difficult to find. Purchased by Cirque du Soleil in 2017, the expectation is that it will continue to further grow and expand in the coming years. The Speechless tour played at ASU Gammage November 15-17, and will be moving to Texas thereafter for six stops through the state before moving on to Mexico. They also have open ended productions in Las Vegas, Boston, Chicago, Orlando and New York. Visit their website to learn more about the show, find dates and locations for upcoming productions, and buy tickets.