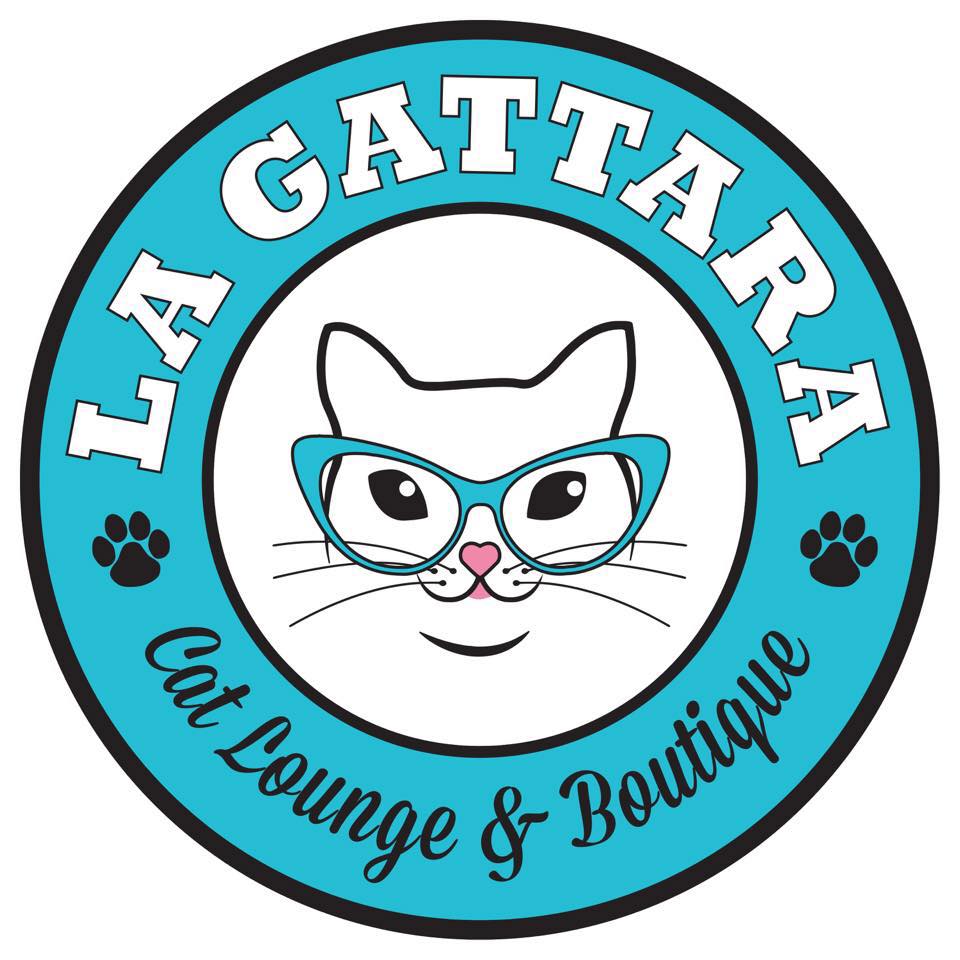 When looking for a drag show in the Phoenix metro-area, you won’t be hard-pressed to find at least one event taking place between Tuesday to Saturday in the later evening hours, with most taking place in Melrose District queer bars with distinct pinache. But what of the folks who can’t stay out late or prefer not to frequent bars? In a valley where even some of the “drag brunches” take place at drinking establishments, a peculiar event recurs monthly on the crossroads of Dorsey and University at La Gattarra Cat Lounge & Boutique, simply titled: Drag Bingo + Cats. La Gattarra translates into English from Italian and loosely means: “the crazy cat lady.”

After taking my enthusiastic and cultured grandmother to multiple drag brunches, I thought it would be a great idea to take her and a few friends to a place where they could express their cat-lady desires in the comfort and safety of a controlled environment. I too have an affinity for animals, as well as cats, but didn’t know what to expect when you mix two temperamental factors: felines and drag performers.

The cat cafe (conveniently located next to a liquor store) is a modest three-room ordeal rented by Missy Pruitt, with half of the store dedicated to a gift shop of cat-related oddities, while the cats live in an enclosure with comfortable furniture, tables, and plenty of shelves for the animals to climb on. In my mind, there could be a fine line between exploitation in relation to the comfort of the cats, and I was pleased to find that we were indeed having bingo in a space that belonged to them, and not us. We were at the mercy of these friendly, furry mischief-makers who were more than curious on our arrival.

Before the bingo began, the cats roamed the room without much care to their visitors as the predominantly older crowd got their party on. I spoke to Missy about her work at La Gattarra:

“I went to Japan, [and when I saw] the cat cafes there, I knew I wanted to try this in The States,” she said. “It was a long road at first, [and] people didn’t understand the concept of a Cat Cafe… raising money was very difficult,” Pruitt continued. “But eventually with all the community support and hard work, we finally opened in May 2017.” 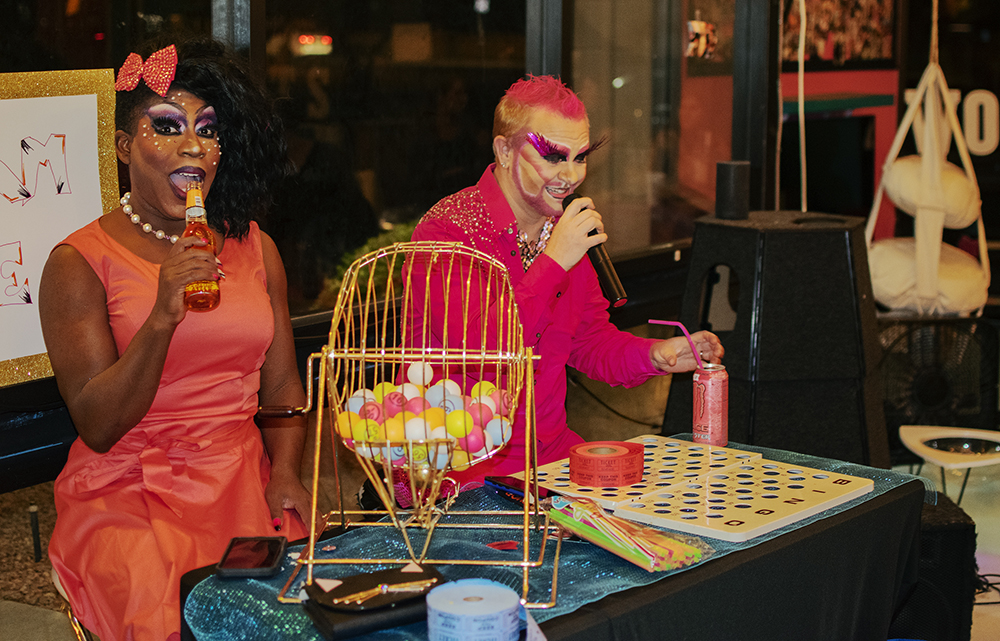 It was at this point in the article where I asked myself, how could I possibly describe a night of Bingo? Assuming the readers know nothing of this ancient practice, I think it could be better described as an easy form of gambling with low-stakes and high blood-pressure. I never witnessed a crowd of folks older than me become overly-enthusiastic and rowdy over bingo, and seasoned hosts Felicia Minor and Freddie Prinze Charming banked off of it with their Groucho-Marx “insult comedian” approach.

There was a table near the front who the hosts humorously identified publicly as the “basic bitch” table, which led to rapturous laughter and irony each time that same table won a round, as their spoils of cute cat socks and sassy coffee mugs reached to the heavens. The ground rumbled beneath my feet as I felt their power grow each time they won a raffle item or Bingo card.

“About three years ago, Missy attended a drag bingo that we co-hosted at a local establishment and approached us about hosting a Drag Bingo night at the cat lounge,” said Felicia Minor. “It has turned out to be a hit and a blast… and who doesn’t love cats!”

“We’re going into our third year hosting Drag Bingo + Cats, and I’ve known about La Gattara since pretty much its opening,” said Freddie Prinze Charming. “I don’t think they’d been open very long when we got involved, and I think we were one of the first events to become a staple.”

“Plus, because the cats are all available to adopt, it opened up an opportunity to get more potential adopters in,” Freddy Prinze Charming added, confirmed by the wall of photos adorned with former resident felines who were adopted into loving families. 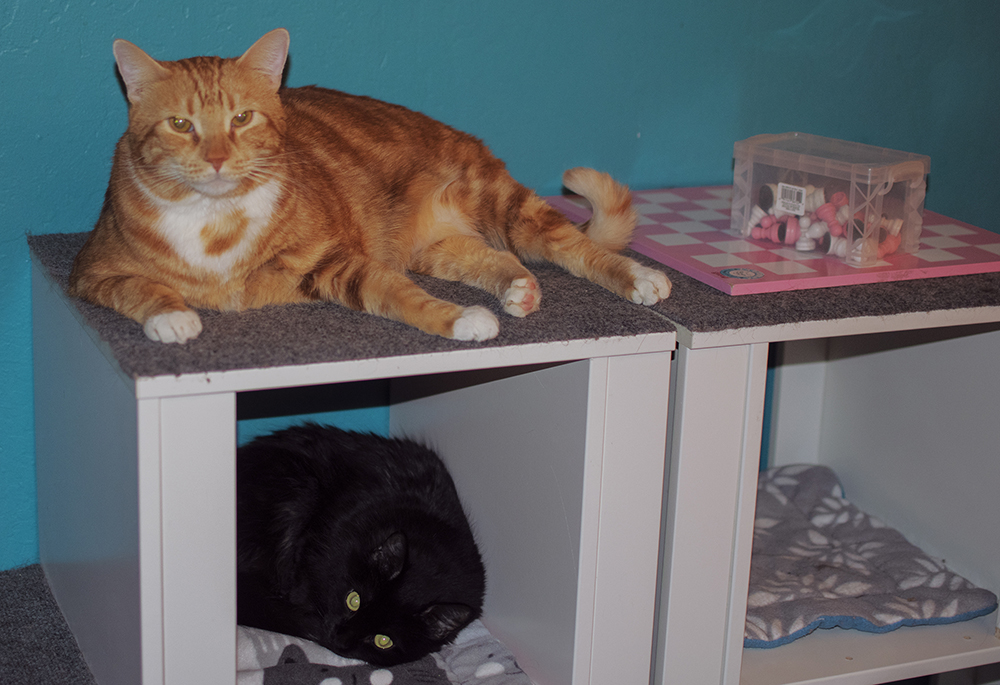 I later asked Missy if she knew the name of every cat, to which she said she couldn’t, since cats get adopted from there frequently. I inquired further on the happiness of the cats and what it legally takes to open a cat cafe:

“We have codified the space specifically for cats and humans alike to be happy,” said Pruitt. “We are very lucky to have partnered with Kate Benjamin and House Panther; she created such a great space for the cats, so there’s high spots and low spots for all the cats to feel comfortable.”

Missy described the city of Tempe as supportive to her business, but said the city didn’t originally understand what she needed to operate; she was then issued a special permit with the help of a local architect.

I also couldn’t help but notice the demographic the event attracted: while I did see some folk not too much older than me, most where cishet Boomer and Generation-Xers with high spirits and cat-adorned clothing. They used a fantastic opportunity to normalize drag in everyday events, showing folks you might not see at queer clubs suddenly exposed to this brash sense of humor and pageantry. 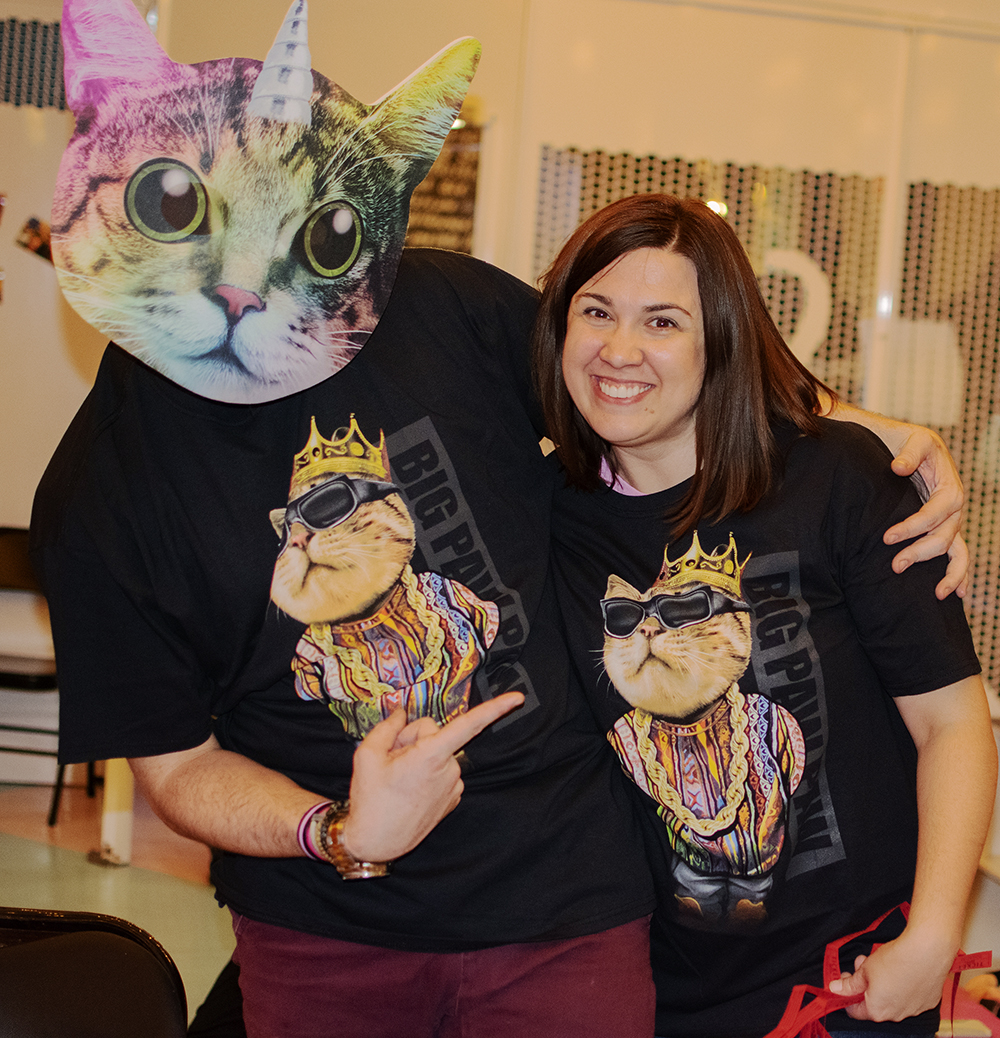 “The majority of our audience fall into the cishet bubble, and aren’t really part of the LGBTQ community,” said Freddy Prinze Charming. “Some are allies, some have family members that are a part of the community, but for the most part we have a very different crowd than you’d find at bingo held in a gay bar; and because we’re actually able to talk to the folks who come, they really get to see there are actual people behind all the makeup, and we do more than just lip sync to other people’s music.”

“We’ve had parents bring their kids to bingo because they know that we keep things relatively PG-13, and [the kids] love drag, but had never had an opportunity to meet anyone who’s done it professionally before,” Freddy continued. “Not everyone enjoys the clubs [and] not everyone wants to spend time in that sort of environment; because this is all ages and BYOB, folks can bring their families, and they can drink (or not) without the pressure of bar sales.”

“It’s fun watching people get excited at the over the top looks, the jewelry and learning more about what it is that we do,” said Felicia Minor. “They learn more about the art of our craft, the history and have a fabulous time doing it, whereas, I don’t think that some people come for the Drag Bingo + Cats events would venture to a gay club to see a drag show; It’s a great feeling and a great chance to educate and open minds.”

I ended my time speaking with the hosts on their own felines and “fur babies” living at home:

“I have 4 fur babies in my life: Missi With An I, Javier, Max, and Sassy. Aren’t pets like children and you aren’t supposed to have a favorite?” asked Felicia rhetorically. “Javier has been with my husband and I as long as we have been together,” Minor continued. “Miss Sassy is just that and loves to cuddle and sleep, while Max is our guardian and likes to protect everyone; he likes to make sure everyone is okay.”

“Brusmus is some sort of Pitbull/Frenchie mix, Sparky is a Jack Russell Terrier, who actually belonged to a friend of mine,” said Freddy. “When that friend passed away a few years ago, I brought Sparky into my home, since he was already familiar with me and my pack; when I lived in a large house in Mesa, I fostered for a local rescue, and whenever I end up in a house again, I’ll probably start fostering again.”

After toiling away in DIY venues, it was incredibly wholesome sharing a few hours with the assortment of cats roaming the room, playing bingo with loved ones. I encourage any “La Gattarras” to check out this Tempe cat cafe. 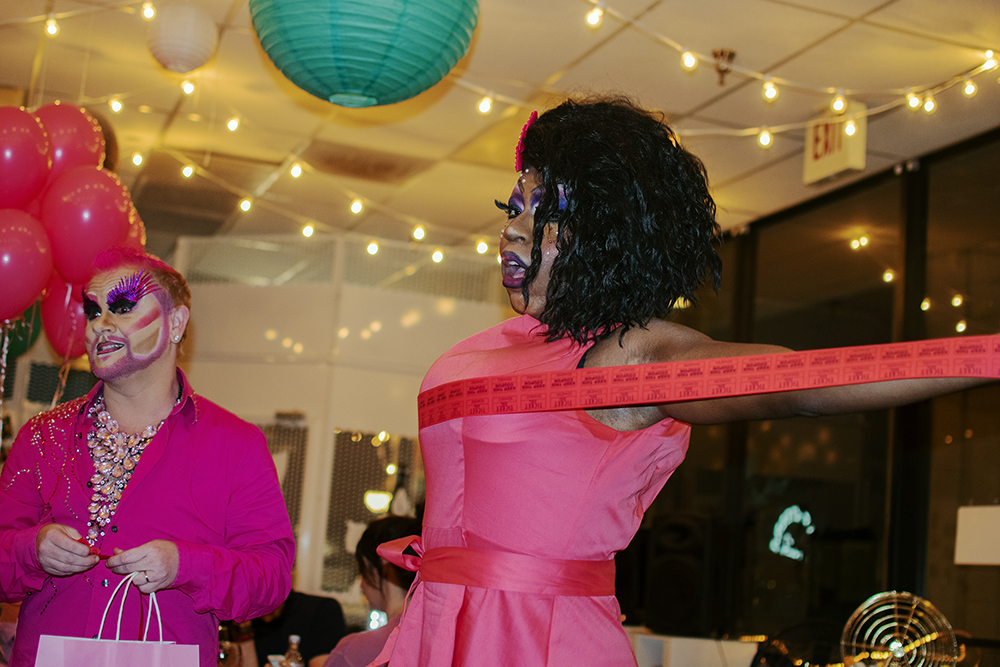 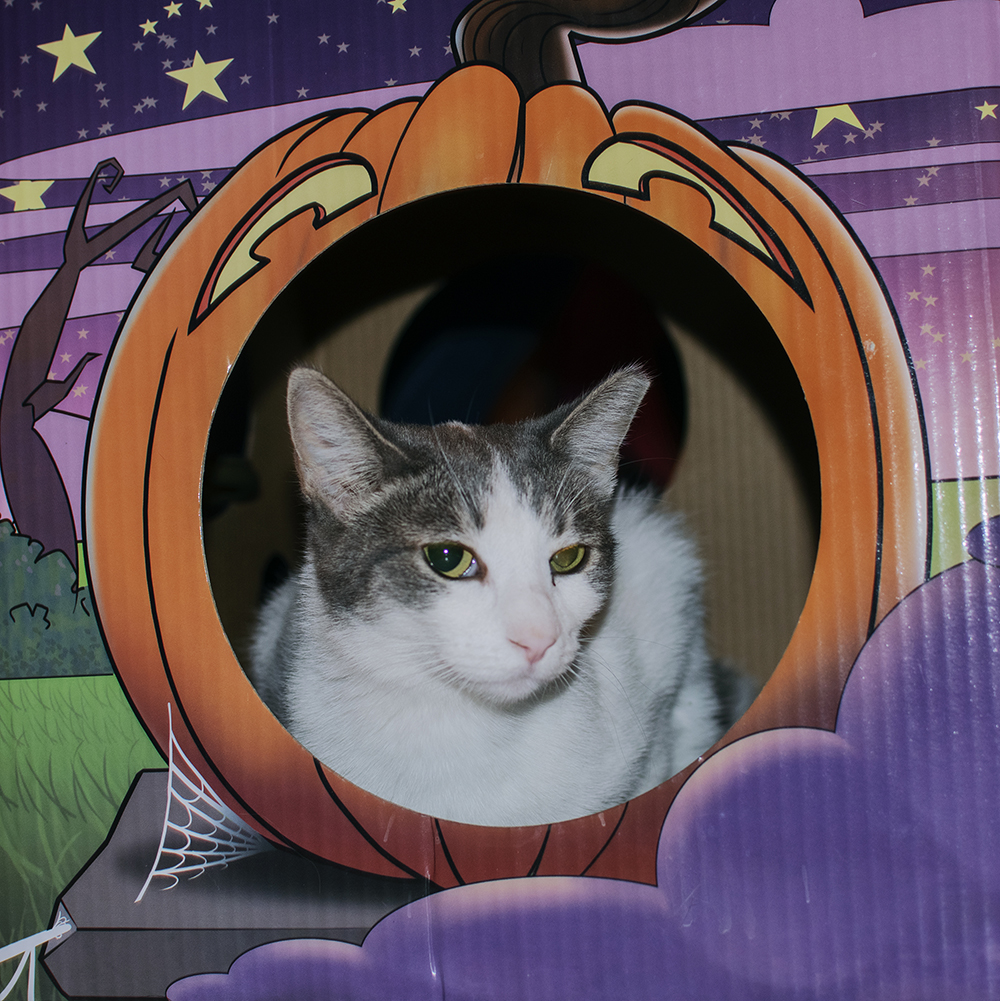 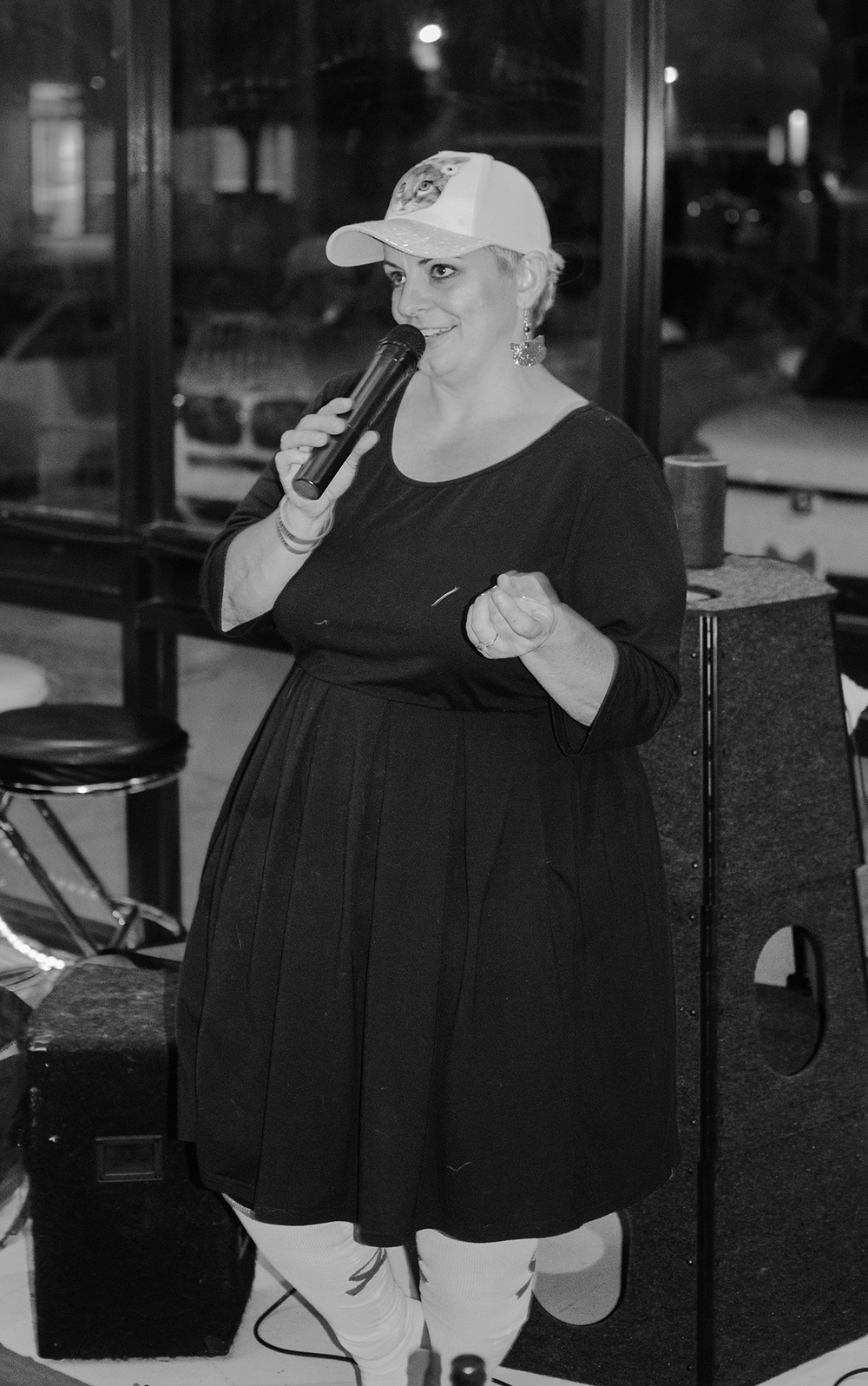 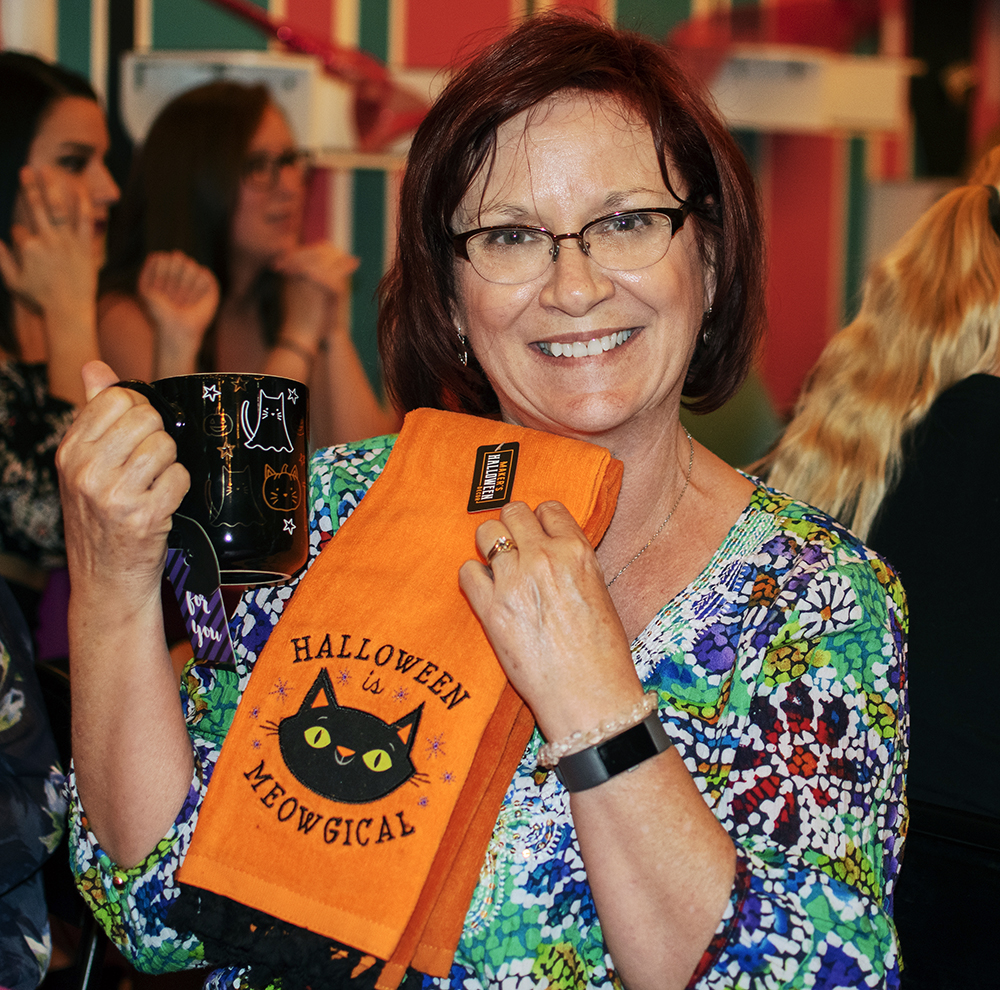 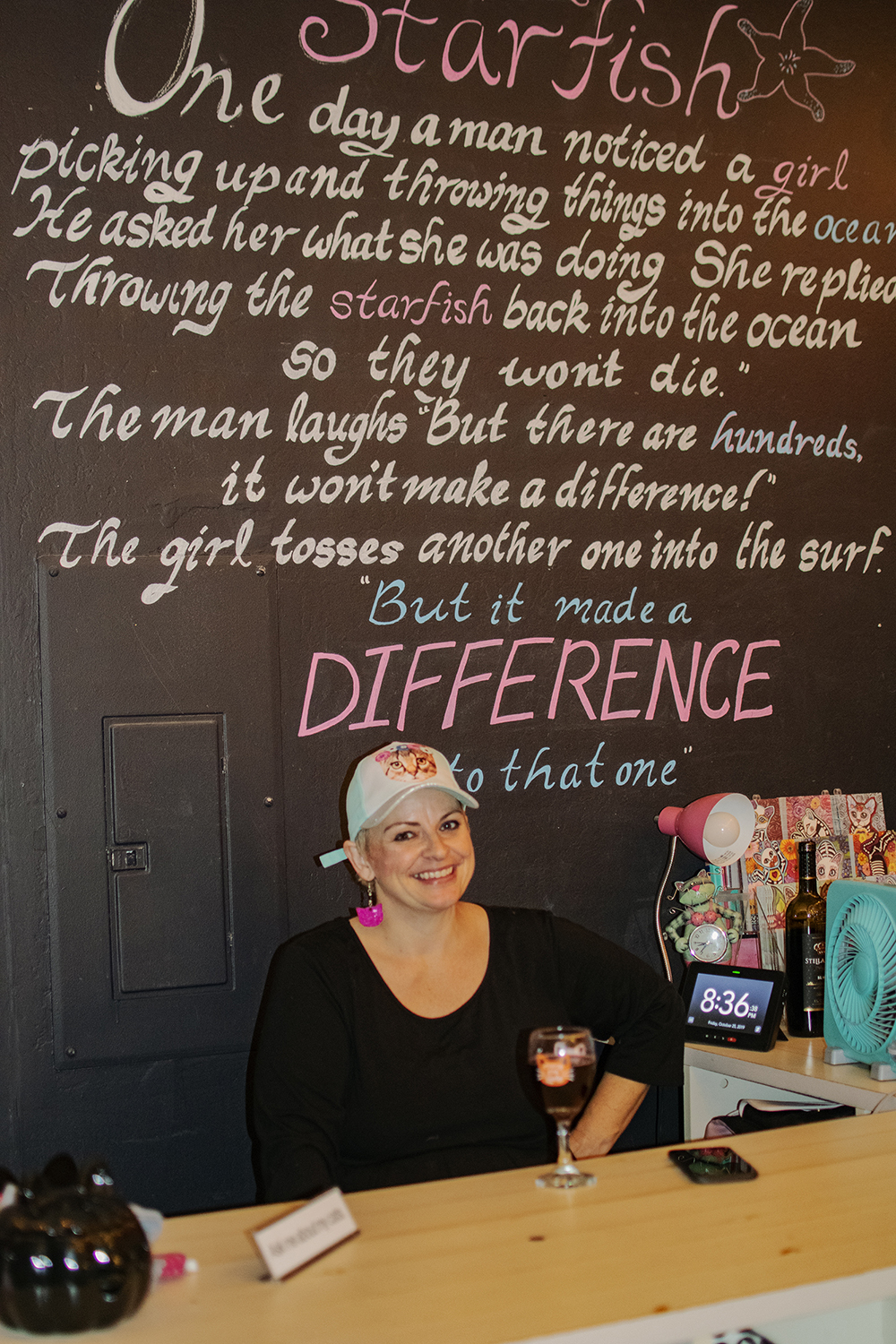 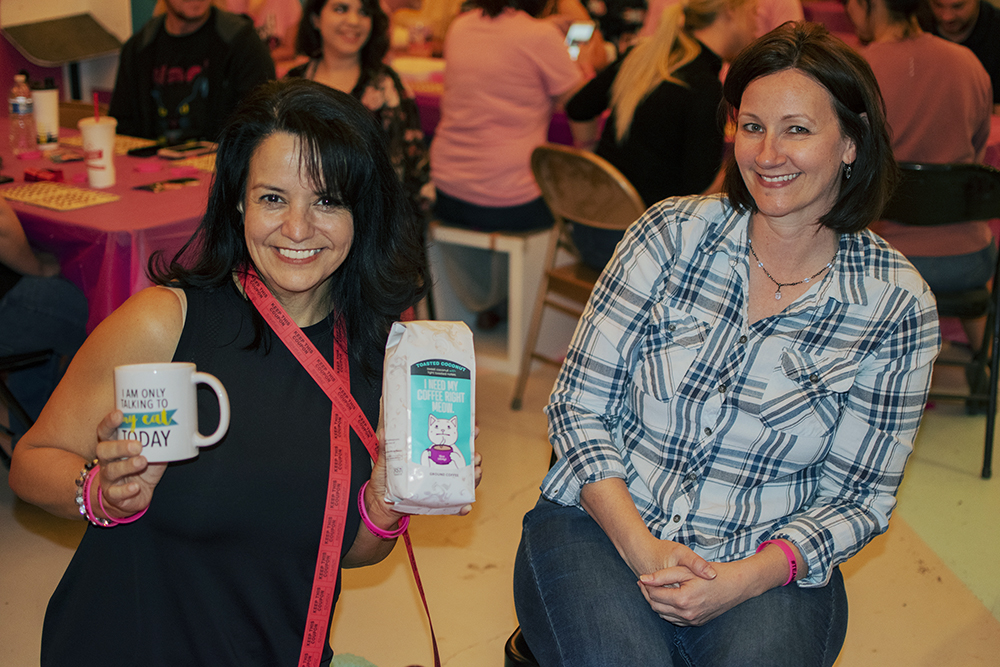 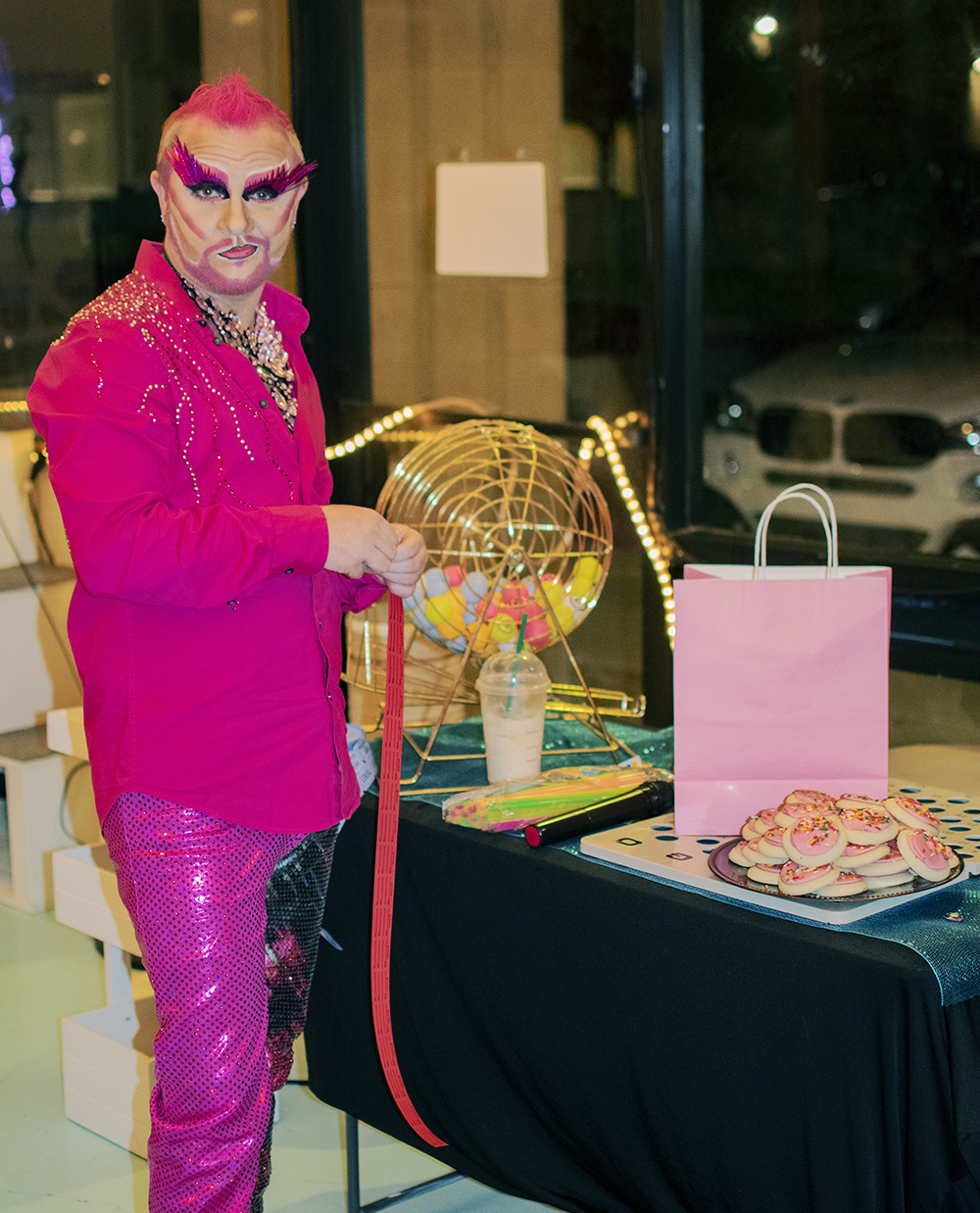