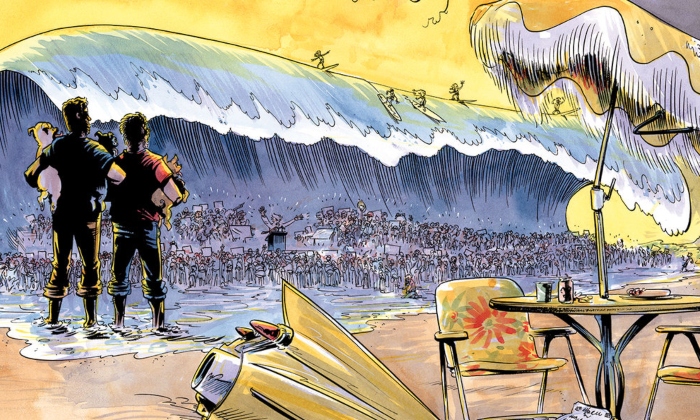 This short ditty is by hometown heroes, AJJ. The band has long been known for the mortifying power of their folk-punk anthems. Songwriter Sean Bonnette holds the power to tear open your chest and reveal your innermost thoughts and feelings; often in a way that is brutally honest and violently beautiful. But, at 93 seconds, “A Poem” only offers a sampling of what’s to come: a new LP from AJJ in January of 2020 chalk full of the songwriting that has defined the band for more than a decade. Check out the new single from AJJ and place that pre-order for Good Luck Everybody.

When Caitlin Anne Webster isn’t working on her solo efforts, she performs with her mainstay, L.A.’s sweetheart country act now based in Tennessee, Nightingale Rodeo. In fact, she’s completing work on two new records: one solo and one with Nightingale Rodeo. And I expect them both to be amazing. That has a lot to do with Webster as a songwriter, but it has an equal amount to do with her performative abilities. Her voice is powerful, forlorn, and devastatingly beautiful all in the same breath. And, on “Wait (On Love)”, it reverberates with heartache and the loss of love in a way that will have you reaching for a Kleenex.

Indie-folk singer-songwriter Rae Lydia released their much-anticipated single “Dead Inside” on Halloween (obviously). Rae Lydia applies a somewhat pop punch to their folk style that reminds me of early Erin McKeown and they have the pipes (and pizzazz) to do it. I’m partial to this song in particular because it buttresses a cheery melody right up against lyrics full of lamentation. I hate waiting, but “Dead Inside” was definitely worth it. And, Rae Lydia released a music video for the single on the same day the track dropped. What more could you ask for? An EP, maybe? Oooo, how about an LP?

“Meet Me in Nogales”

This Arizona-based songwriter only recently surfaced on my radar despite making music in the Valley for more than a decade. The songwriter describes “Meet Me in Nogales” as “1/3 love letter to Mexico, and 1/3 my reflections on what it might feel like to leave everything you’ve ever known to try to find safety in another country.” For those of us who grew up in the border states, crisscrossing back and forth through places like Nogales the current political climate has certainly tried to rob those places of their magic. This track is a nostalgia-soaked Americana love letter to a lost era. Make sure you give Table Top Joe a listen below and then head to his Bandcamp page to check out more tracks from this artist.

Mike Montoya, on the other hand, has been a longtime favorite here at YabYum, as both a songwriter and a performer. Newcomers, hold-out through the intro. I know you internet kids love to check out after fifteen seconds, but you need to commit to at least ninety seconds before you can really start to taste the storytelling prowess that defines Montoya’s lyrical strength. Mixing everyday observations and mythical visions, the lyrics lift “Yuma” from the stripped down guitar work and live, lofi performance to something truly memorable that begs to be replayed over and over. The clarity and dexterity of Mike Montoya’s voice certainly doesn’t hurt either. And, word has it, this single is just the first from a forthcoming live EP from the artist so we’ll be on the watch for that release!