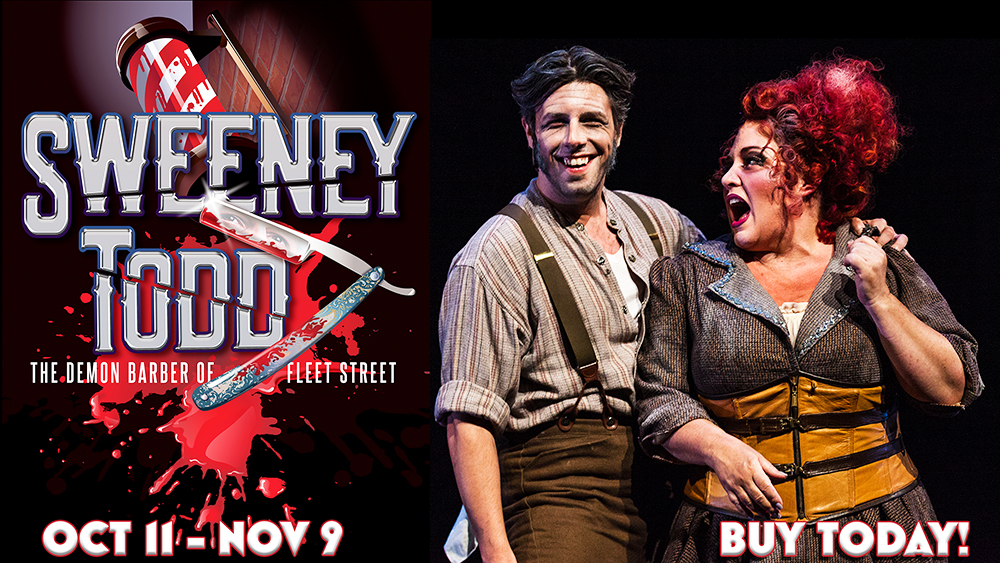 Originally appearing as a character in penny dreadfuls (akin to very early British comic books) in the nineteenth century, society has imagined him and re-imagined him countless times. Inspiring not only Sondhiem’s 1979 Tony Award-winning musical, but also films and books, television shows, a ballet, and nods from the zeitgeists of everything from Nirvana to The Office. There is something about “The Demon Barber of Fleet Street” that appeals to and fascinates us. He is dark and temporal. Brutal and cherished. Akin to The Joker from the DC universe, we love to experience and revel in his wickedness.

So a fantastic production of the musical is an ideal way to start the Halloween season. And that is exactly what Arizona Broadway Theatre is delivering. A witty yet horrifying, gorgeous yet grotesque, incredibly impressive version of Sweeney Todd: The Demon Barber of Fleet Street.

The stage is transformed into the dim and unsavory streets of 1800s London. Macabre and ominous, with characters adorned in rich fabrics, tight corsets, and billowing heavy jackets. The pie shop and barber shop are constructed into a fully-rotating two-story centerpiece that evolves to accommodate Sweeney’s upgraded barber’s chair and its crucial and devious maneuver.  There is billowing smoke and a fiery oven. The makeup is gothic and grotesque, conveying extra shadows under the ominous overhead lighting. The sound effects, such as the bell that rings to alert Todd that someone is about to enter the shop, are timed perfectly, never missing a beat. And the costumes and frantic mannerisms in “City on Fire!” make for one of the most terrifying moments you will ever experience in a musical. Ever.

Ryan Michael Crimmins is adept at portraying a kind and innocent Anthony, uncorrupted by the trials of existence until he too is pushed into immorality. Anthony’s character is blessed with one of the most beautiful songs in the score, and Crimmins does not take it for granted. His “Johanna” in Act One is soaring and subtle, and as lovely as is due such a gem. It was an odd directorial choice to leave the caged dead bird behind as a token of his affection, but perhaps it was a nod to the macabre that exists even in the most pure of intentions.

Cassandra Klaphake’s Mrs. Lovett is disturbingly hilarious. She shows a tempered balance that almost betrays her actions, and makes her seem nearly sane. Which comes off as particularly unsettling, and is an absolute joy to witness.

And Tony Edgerton gives an absolute killer performance as Sweeney Todd. Edgerton conveys a heaviness to the role of a man who has lost everything and is seeking his revenge. With a masculine swagger and charisma that betrays his lunacy. Perhaps the most effective non-verbal cue of the show is Edgerton’s odd but enchanting gyrations of movement as he descends into madness, first during “A Little Priest” and again at moments of further descension.

Sweeney Todd is not not for the faint of heart or weak of stomach. Several people looked away or shielded their eyes at times because they could not bear witness to the most gruesome of moments. But it is also a masterpiece with a beautiful score. It is both dark comedy and pure tragedy.

When done right, as this production is, there is no wonder that it has made such an indelible mark on pop culture.

Sweeney Todd is playing at Arizona Broadway Theatre through November 9th. Tickets can be purchased online. I highly recommend getting tickets for the show and the meal. Because what Sweeney Todd fan doesn’t want to have a meat pie before the show? This is the first production of ABT’s 15th season, so there are many exciting shows yet to come. If you would like to catch several, call the box office at 623-208-6479 for information on season ticket packages. Upcoming mainstage productions this season include Elf The Musical during the holiday season, La Cage Aux Folles, Chicago, and many more thereafter.