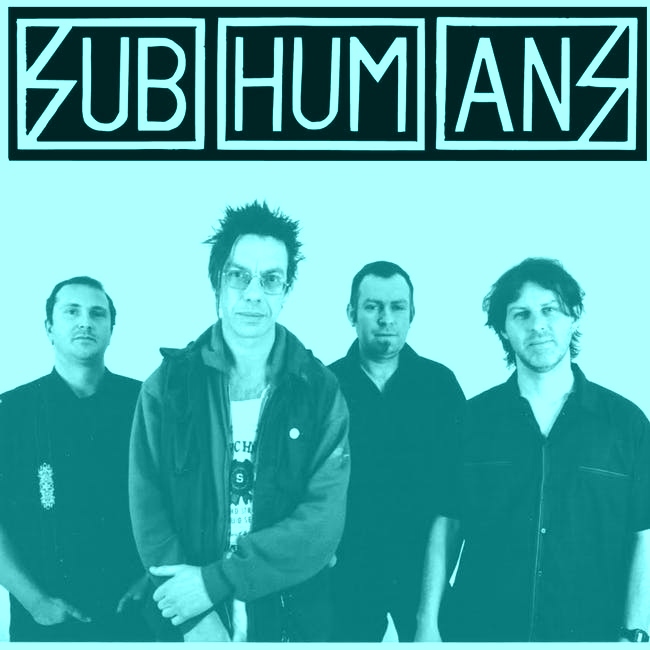 Society’s finest minds have spent decades debating over this seemingly timeless question: What is punk?

Questions of authenticity and intent in one’s art and attitude may be raised: Is the music abrasive enough to piss off one’s oppressors? Is it simple enough for anyone who’s pissed off enough to pick up a guitar and play it regardless of musical experience? Is it an embodiment of a love of social justice? Does it convey a fuck-you attitude toward those that hinder said justice? Does it transcend rules? Does it demonstrate a Do-It-Yourself work ethic and lifestyle? Perhaps all of this is cliché and an oversimplification, but that doesn’t make the deliberations any less real.

As obnoxious as this conversation (and articles about it) may be, it is worth noting that classic British band Subhumans have not only stamped every space in the punk aesthetic bingo card, they also helped invent the damn game, hence their being brought up repeatedly as co-parents of the movement. They formed in 1980, a time when punk was still in its infancy and exploring its possibilities as a philosophical and artistic force. Along with contemporaries such as Crass and Minor Threat, Subhumans released most of their material on their own label, becoming iconic through their work ethic and eschewing the need for approval from the all-encompassing “system” that they frequently called out.

If you’re like me, you were lucky enough to meet kids in high school who scoffed at your Green Day and NOFX shirts, showed you a Subhumans patch and told you, “THIS is what you need to listen to.” And they were right. This is a band who could match any pop-punk band’s catchiness and any hardcore band’s moshibility, but who were also at an intellectual level few rock bands have ever matched.

Many disenchanted people (such as myself) have had their lives changed by finding one of their albums at one of the better record stores in the neighborhood, going home and taking in the confrontational monochrome artwork and the handwritten, sociopolitically-charged lyrics. Miles away from the Sex Pistols’ “No Future” mantra, Subhumans dare you to use your anger to make you a better person, to create a version of yourself that defies the crippling toxins emitted by the system and rallies against it through every one of your daily actions, even by doing something as simple as abstaining from supporting the factory farming or cigarette industries.

Their new album Crisis Point is their first in twelve years, and it shows that they somehow haven’t lost any of the ferocity or songwriting ability that they had at the beginning. Tackling topics ranging from the terrorism scare to fake news conspiracy theories to the poison that we injest all day just by being alive, their eloquence and hooks fit in perfectly with their work from the 80’s, an incredible achievement for a band that’s been going at it for this long.

The fact that they’re still regularly touring nearly forty years after their formation is a testament to their status as the Rolling Stones of counterculture, and their onstage energy remains as vital as ever. Singer Dick Lucas flails around the stage, feeds off the crowd and spits fury into the microphone with the immediacy of a societal outcast a third his age, seeming right at home with himself and defying the image of an aging and decaying punk who merely acts out the idea of youth.

Younger generations of pariahs are lucky to be able to still see this band in person, at a time when they feel like the system and its leaders are the worst they could possibly be, just as youngsters of the 80’s must’ve felt the same about the Reagan/Thatcher era. In this way, today’s angry kids can be unified with the past by the activity of fighting the same battles, just against different faces. For this, Subhumans have always been the perfect soundtrack.