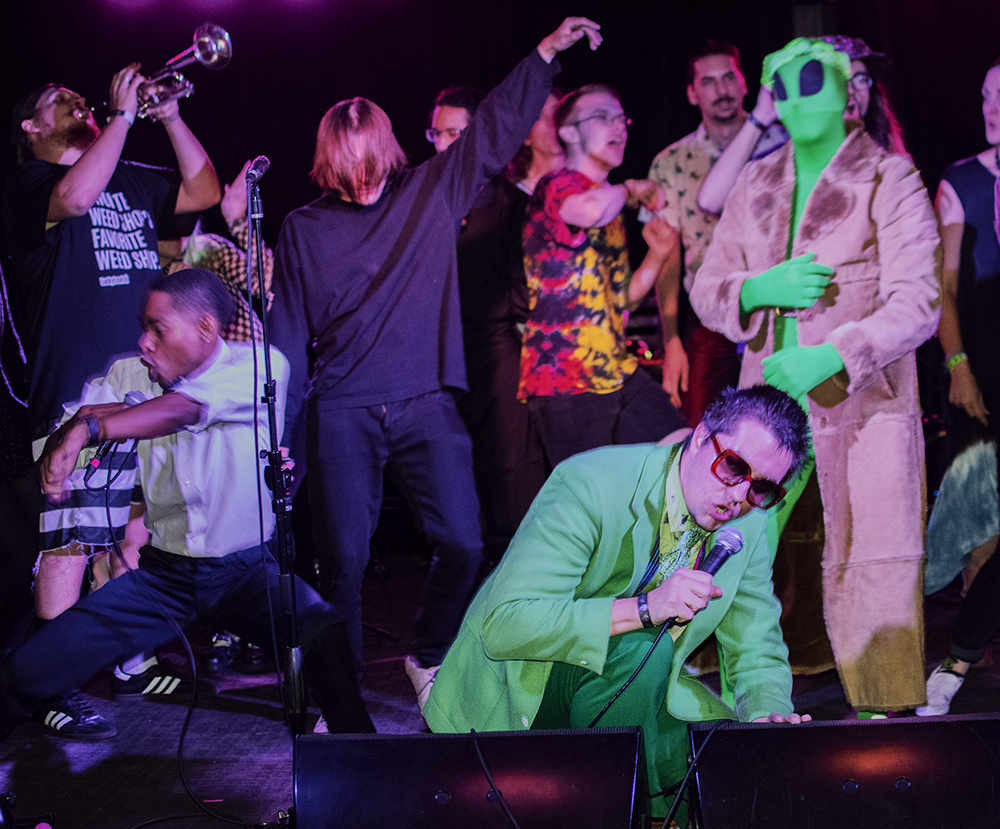 On the 20th of October, I felt my writer-senses tingling after months of inactivity behind the keyboard, and later felt the supernatural compulsion to cover the Spicy Mayo album release show featuring Audrey Heartburn, Dadadoh + The POC, along with Dwayne and The Rock Hard Johnsons at The Rebel Lounge. Today would not only mark the first time I would capture Audrey Heartburn and Spicy Mayo behind the lens, but a perfect opportunity for this old dog to show off his new (slightly more sober) tricks while covering a mysterious, headlining local band with familiar faces.

I can’t remember the last time I covered The Rebel Lounge in 2019, but whoever was kicking ass in the sound and light department, I commend them for contributing a professional presentation for the local, seasoned performers. First on the bill was party-punk band Dwayne and The Rock Hard Johnsons; fronted by the enigmatic Ben Schifano on vocals. Their lanky frontman dropping his calm, collected pre-show demeanor and releasing an energy I can only associate with a ballerina on amphetamines.

Schifano used the time of their set to glide his lanky figure corner to corner, orating the most ridiculous combinations of nouns and ideas together in a way which makes satirical sense in our society. Many of the band’s tracks contain early 2000s cultural references forced into a demonic blender leaving the end result a language we could all shockingly understand. Both Dean Simpson on guitar and Max Mulmed on drums were in on the joke as well — their outfits and music completed the early 2000s pastiche as if Surge and Pepsi Blue vomited on stage, and then Max Martin built Britney Spears’s first album off it. 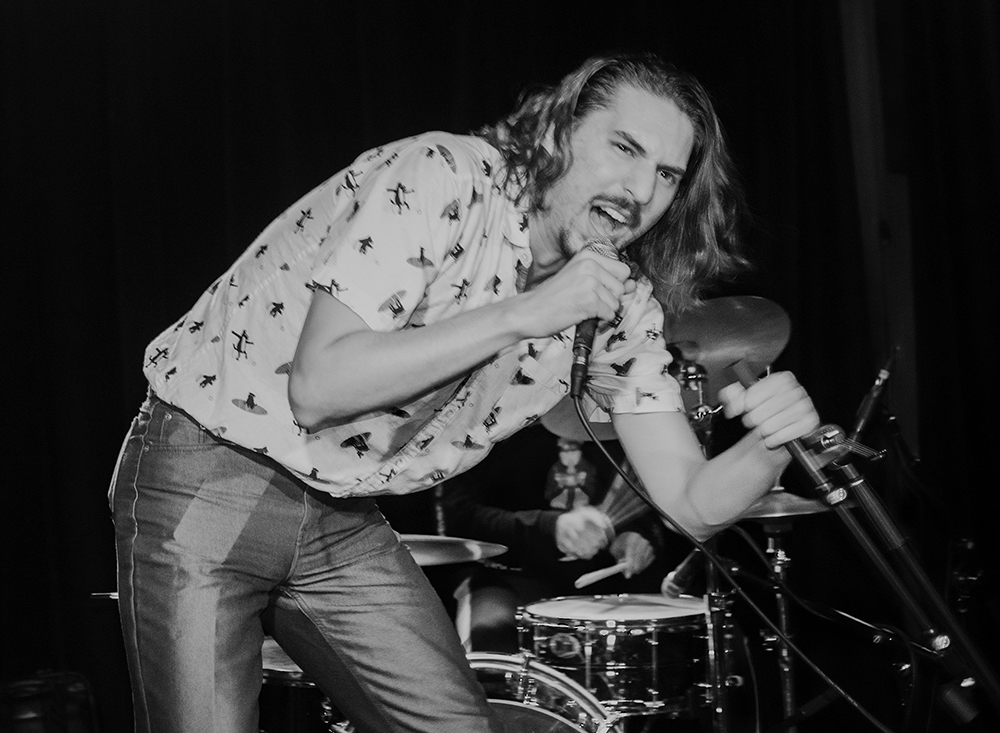 Ben Schifano of Dwayne and the Rock Hard Johnsons

Like a bizarre crescendo, the band uses these silent commentaries to construct moments like “Wrecking Ball,” where we see Ben emote Miley Cyrus’s lyrics with emotional transparency, or “No Doubt Tragic Kingdom, 1945” which gives subtle nods to the referenced No Doubt instrumentally. The backup vocals Dean Simpson uses to back Ben would feel right at home in pop punk, and added a melodic charm and added layer to the abrasive Schifano.

Fear not, Arizona: although it’s of general understanding that Arizona produces a slew of “gimmick” bands, Dwayne and The Rock Hard Johnsons turns a mirror on the word and forces the definition of “gimmick” to stare itself in the face. Here before you are three individuals repurposing early 2K culture like a home improvement show. I caught up with the band after their set behind the venue to discuss their craft:

“It started with me and Max; I played a song on the acoustic guitar for a high school assignment and just screamed; and Max was like, ‘let’s start a band,’” Ben Schifano explained.

“We had different pun names we could go through, and then one day I thought of ‘Dwayne and The Rock Hard Johnsons,’ and it was seen as sarcastic because I didn’t see myself as a big Dwayne Johnson fan, [but] I saw it more as mocking the toxic masculinity of those Action movies at the time. Now I fucking love Dwayne Johnson,” Schifano exclaimed.

When asked about their sound, Dean Simpson would describe their sound as “Kidz Bop Trash Punk.”

My Number one Hit $ingle!!!

Less Than Jake Is A Good Band 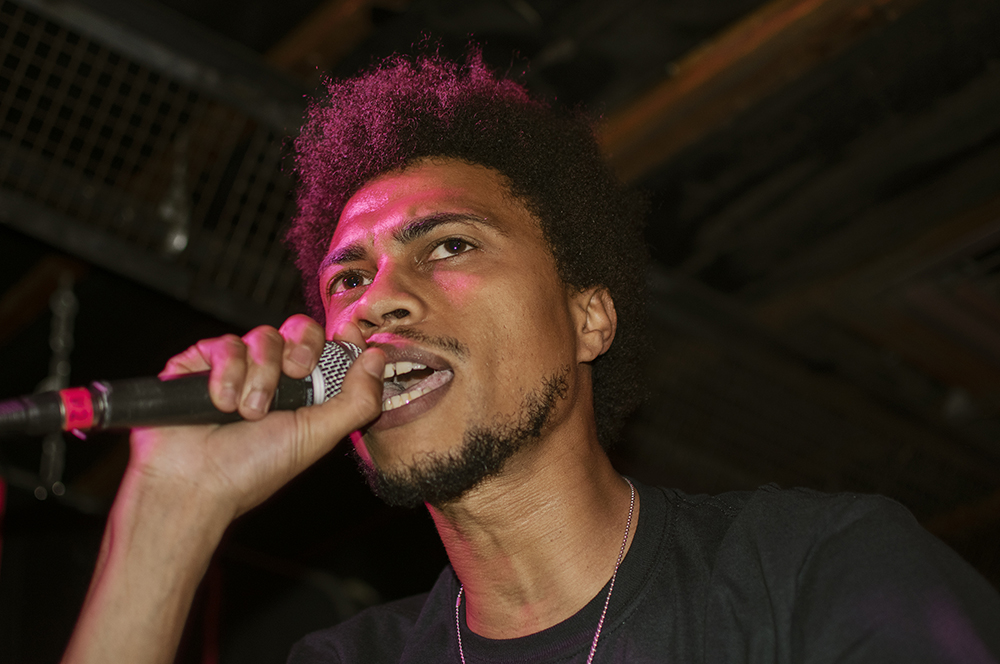 Fronted by the charismatic Bryan Preston, Dadadoh + The POC confidently took the stage before launching into their set of rap, rock, and punk packaged nicely by Preston’s interspliced monologues on race, culture, and Cornish Pasty. Even with the silliest of expressions, he would continually give me a look or trail off into the distance as if he was in on the joke and we were his minions. Since I saw them previously at CrispyFest, their entire vibe and image represents a “cool and collected” most in the Arizona scene vie for.

The casual attitude of Preston coupled with the layers of Brady on guitar and David on percussion makes tracks like “Erik Kartman” shine in both the studio and live environment. The band’s music is as unapologetic about appealing to societal morality as much as their name indicates the rise of the underdog. One moment in their set, you might be treated to a rap interrupting the punk rock vibes of the song. I asked Bryan Preston about the writing process of Dadadoh and drummer David after the show: 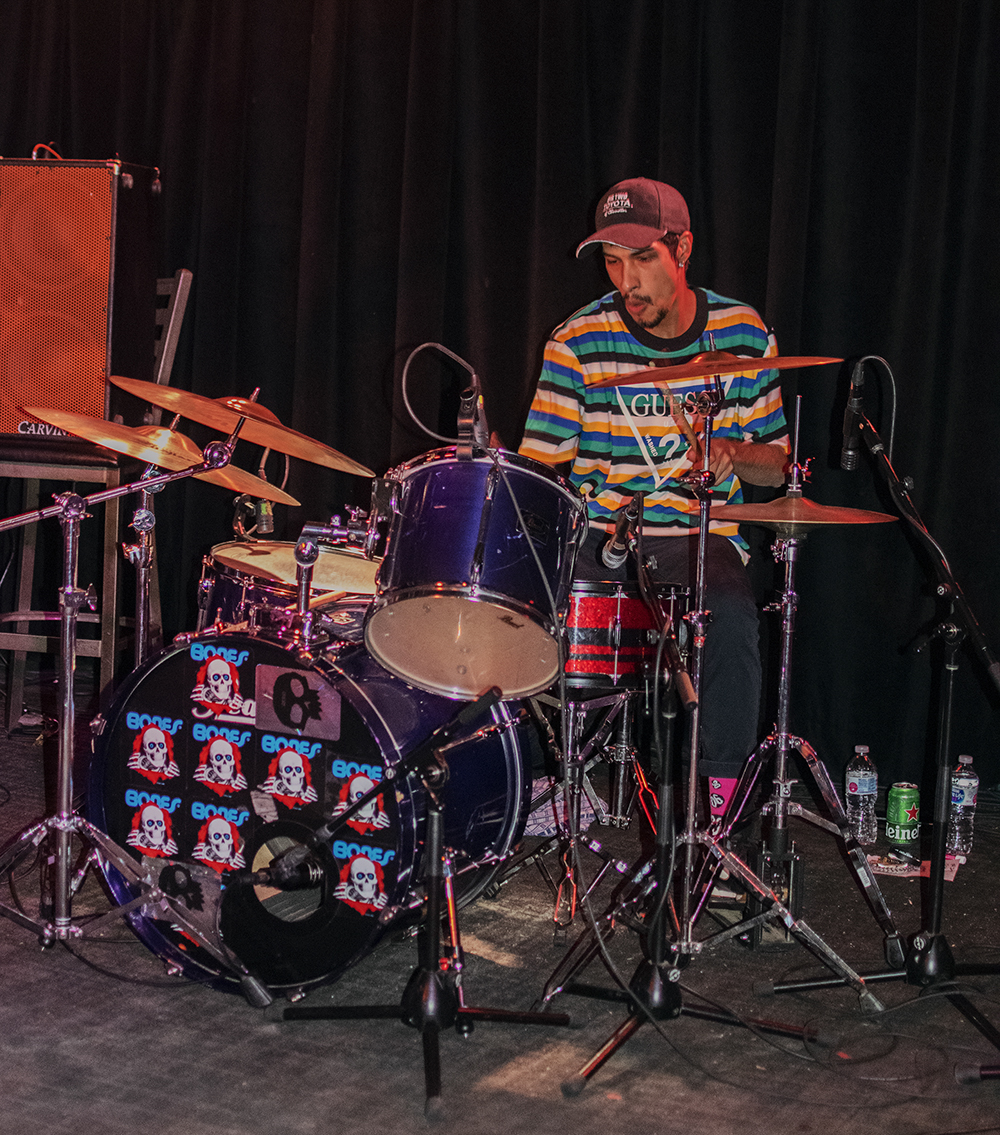 “A DaDadoh project is the story of Bryan Preston and the world I’ve experienced; everything you hear starts in my head,” said Bryan. “I write all the lyrics, rhythms, the initial melodies, song structures and then I present them to my band for them to add their flavor to it. For me, it’s very important that the music is there to hold what I have to say,” Preston continued. “As a result, the arrangements will always be important over everything else when it comes to my songs. There’s always an element of [not knowing] what’s going to happen next.”

While Bryan might handle the nitty-gritty of Dadadoh , his “Supremes” or “POC” of the band bring their unique musical experiences to pack the required punches in “Black Eye,” or switching vibes on rap song covers like “I.D.F.W.U.” and “Lap Dance.”

As David states, “I’ve been playing [drums] since 8th grade and the band’s been roughly active for two years.There’s a way the songs are written, but we have tons of creativity [when we play live.

Give U the World

The headlining band of the hour, Spicy Mayo, entered the stage in snazzy, jazzy, and kitschy suits with smoking jackets. Frontman Dallas Rose was clad in a bright green jacket, adorned with glasses and saxophone in hand, while Bryan Preston re-entered the space with a smooth svelte jacket and sunglasses, but this time joined by Daniel Suber from Hesperus on rhythm. In reference to the lack of recurrent live performances and limited coverage on social media, I think few who hadn’t seen them before didn’t know what to expect: their icon on Facebook is the famed “Britney Spears shaving her head” portrait while their single covers on Bandcamp resemble creations spawned inside Microsoft Paint. But somehow they play a rough combo of nightcore and punk wrapped up like a sausage with samples executed by Bryan Preston fused with jazz.

Spicy Mayo began their set imitating a retro talk-show and faux-interviewed the redheaded trumpet player Danny Torgersen (Captain Squeegee) on the possibility of him joining the Spicy Mayo ensemble. “Dirrty” Dallas Rose coaxed the crowd into laughs as the trumpet player delivered austere punchlines to the straight-faced Rose playing host; Bryan Preston contributed to this bit with a healthy dose of reaction samples over the PA. The band then jumped into “Wasting My Time,” introducing their short bursts of jazz amongst shouty vocals and smooth rhythm, presumably the aural representation of what 1920s cocaine felt like. 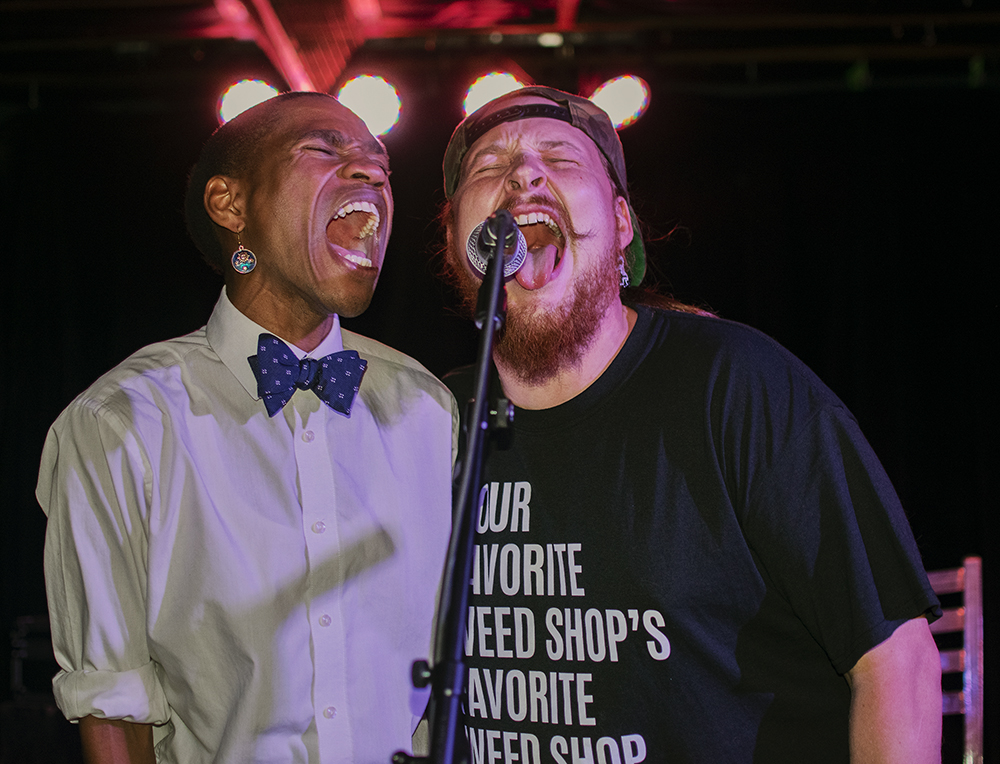 While all the lyrics feature some form of self-deprecation, highlights included “funkier” bits of instrumentation where the brass of Torgersen and Dallas seemed at odds, while Bryan Preston stood to the side like an announcer during a boxing match. While they were always on the same team, it was a Pokemon battle of the brass, with Daniel Suber lining the Spicy Mayo experience with clean, snappy rhythm tying together the chaos. I spoke to both Daniel Suber and Bryan Preston on Spicy Mayo after the show:

“I co-executive produce the albums with Dallas from top to bottom through my production company TVLiFE Entertainment,” said Bryan Preston. “I’m Primary Engineer when it comes to tracking the albums and we do a majority of the recording at my house in Tempe, AZ. I write arrangements, lyrics and play a myriad of instruments on the albums. Each project typically takes about 9 months from start to finish, [and] I’m also apart of the writing team that comes up with the lyrics for the songs,” Preston continued.

“I’ve been in a lot of bands with Dallas, but as things have progressed, he’s honing his influences,” said Daniel Suber. “It’s a distilled version of his ideas. It’s like being on a skit writing team for a comedy show and it’s easily my favorite part of the recording process! We play around a lot with pop music elements too; there isn’t much room for improv in a Spicy Mayo project, and that’s just how it’s supposed to be.”

The highlight of their set could have closed the show in a different venue when the band broke out into a cover of a Waka Flocka Flame cover of “O Let’s Do It,” encouraging the crowd to create a dance party on stage while every member of the band transformed to a multicultural version of The Beastie Boys. Their set was short, sweet, and spicy, and everyone should check out this acid trip called Spicy Mayo.

Everyone Sure is Stupid Except Me

I was more than happy to capture Audrey Heartburn on camera since meeting members Sophia and Salah when we first met at one of the first events I ever photographed, Endless Bummer 3. I would go on to party with them and, at one point, all of the members of Audrey Heartburn individually, but to my regret, never getting a chance to capture their live performance. Many of my friends who have caught the band previously described their live sets as electric, cementing this adjective by vaguely reminding me of The B-52s with their heavy involvement of the entire ensemble and caffeinated harmonies.

Sophia O’Malley handles the bulk of the vocals with a chesty, wistful soprano sporting a rhythmic tambourine while she bops to the beat like an 80s Madonna fan, while I would call Salah the other frontperson, getting some lead vocals in for himself and engaging with the crowd in endearing, sarcastic banter. What truly made their ensemble captivating was their complete inclusion of every member expressing themselves musically. Zac Evans was clad in a Hawaiian shirt, letting his arms fly as the music would focus on his drumming during certain measures, while James Cabeke on bass would get personal with the crowd by putting his left leg up, looking pensively into the distance. Joe Allie, who played rhythm guitar on stage right joined his musical contemporaries on stage by thrashing at any moment he got. 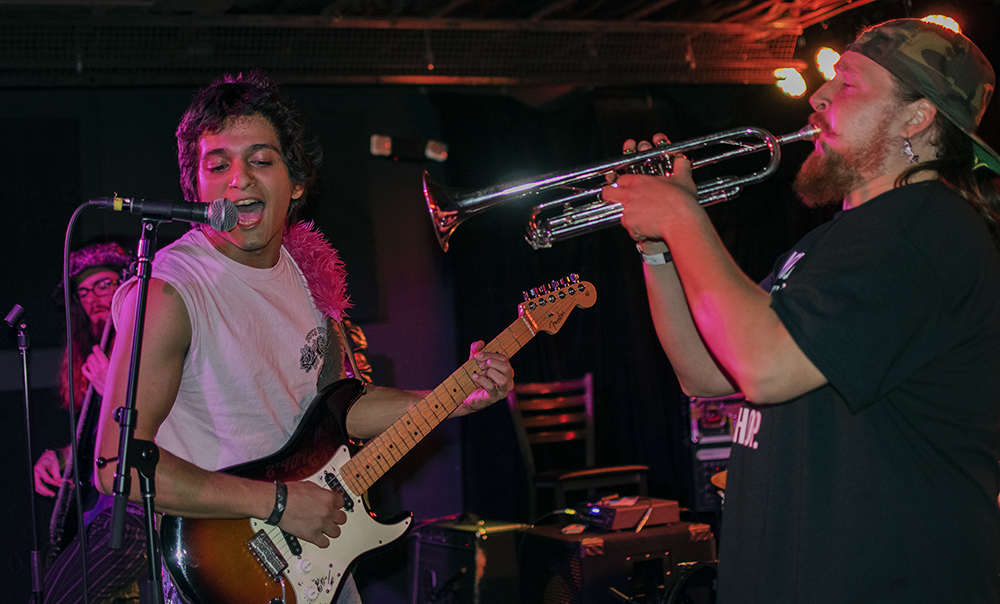 When it comes to their musical output, Audrey Heartburn experiment with pop punk sounds highlighting the vocal harmonies of Salah and Sophia; when attending their show, dancing is mandatory, because the members will eventually make their way into the crowd for some good-ole-fashioned audience interaction. “Squeeze Me” highlights their sing-song melodic compatibility with catchy guitar riffs and a smooth bass line, while their final song, “Animal” allowed the band to get animalistic with their stage presence. I caught up with Sophia and Salah after the show to hear about what the band was up to:

“We’re working on our next album [called] Fever Dreams,” said Salah Moharram. “It’ll be comparable to a ten-course meal [at] one of those fancy restaurants where you don’t get to pick what you eat; you can listen to it on repeat and it won’t leave you satisfied.”

“It feels really exciting to be finally releasing a full-length album [and music videos] after a couple of short EPs,” said Sophia O’Malley. “This may sound a bit different and dreamier than the style we had taken on previously, but it’s still Audrey Heartburn and chaotic in its own right.”

After a gratifying night of local music and some gin, I realized I could finally write again. 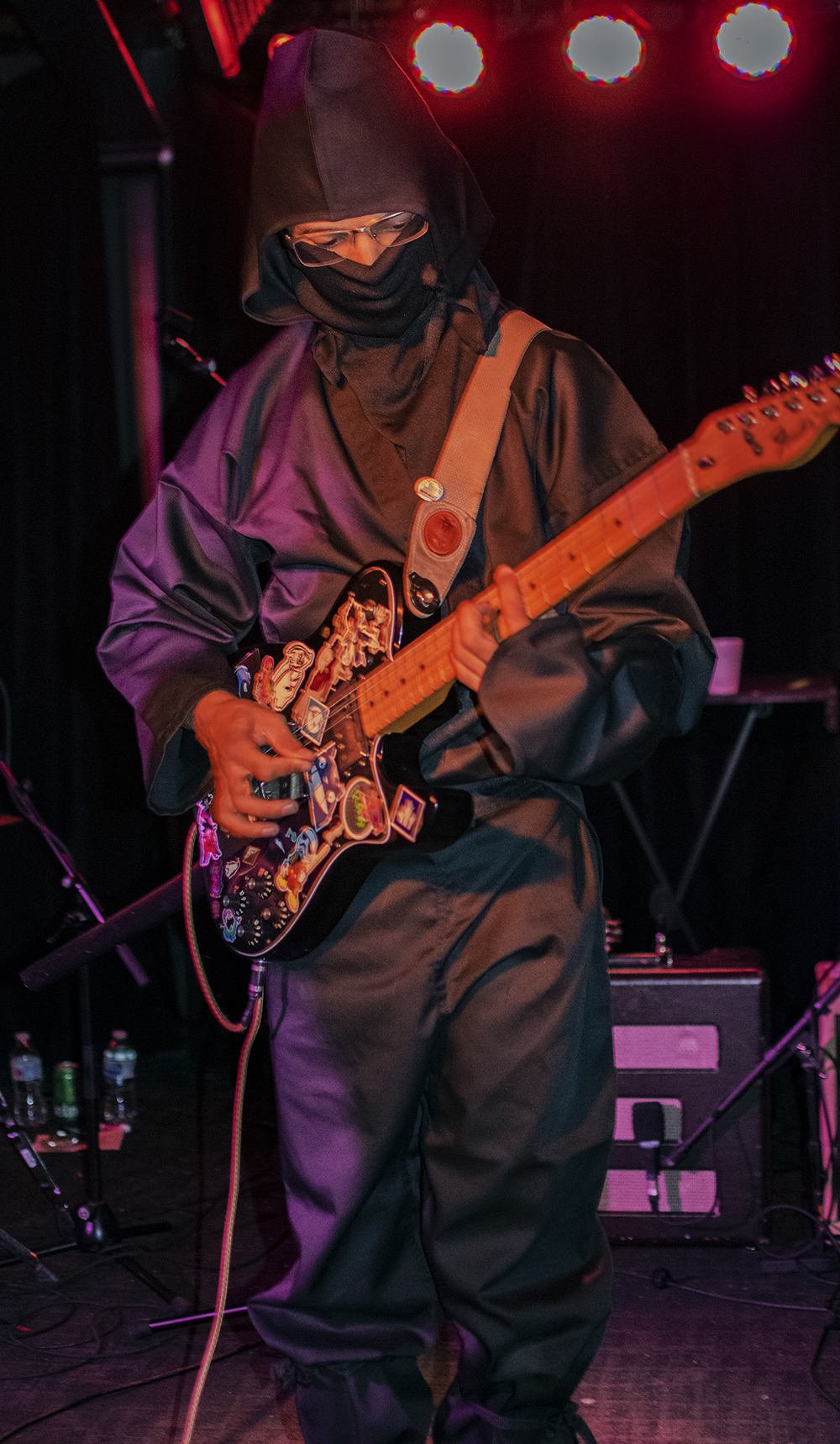 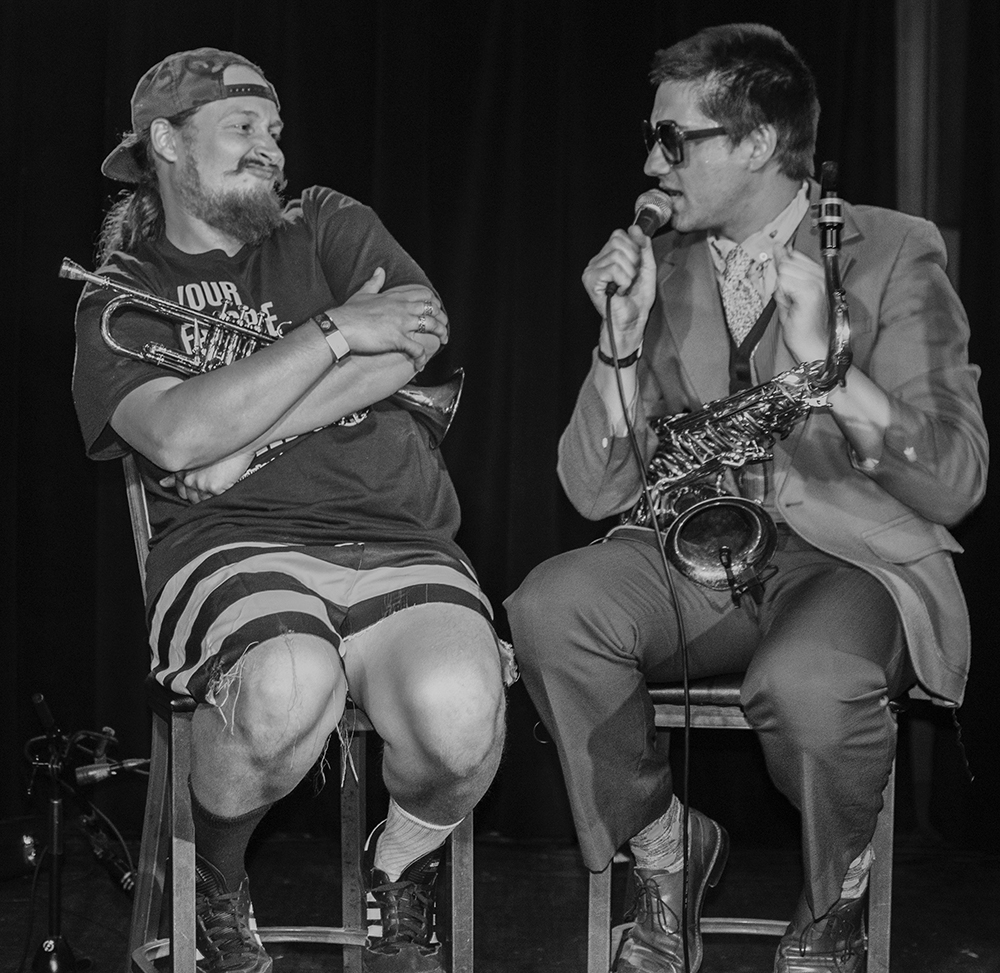 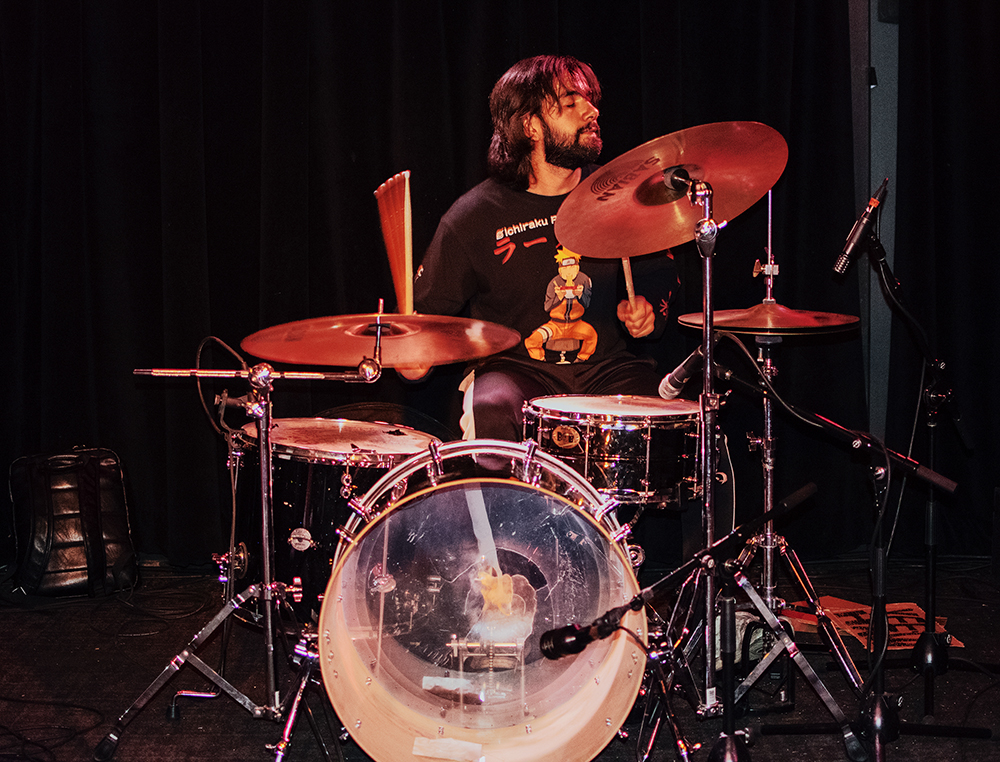 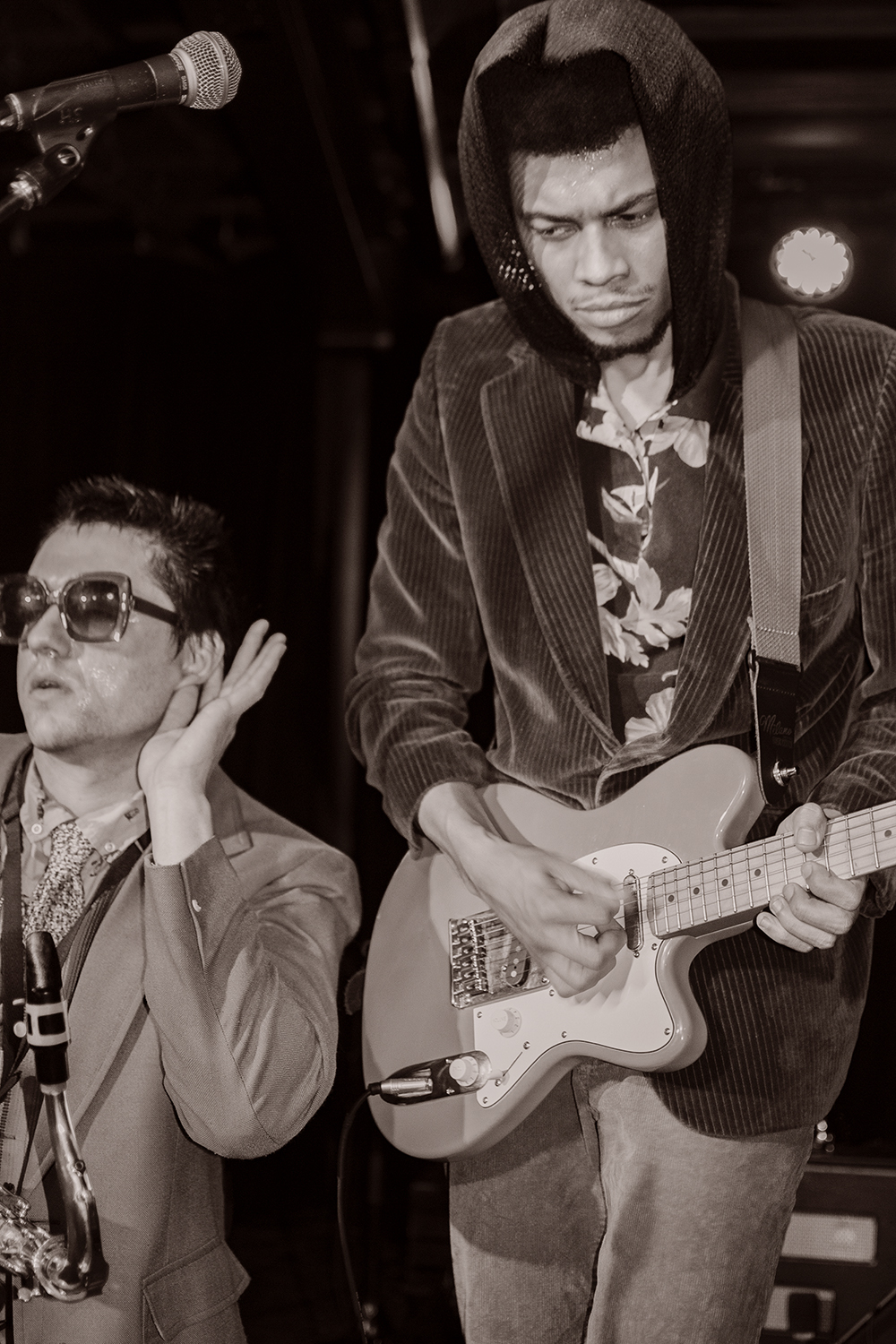 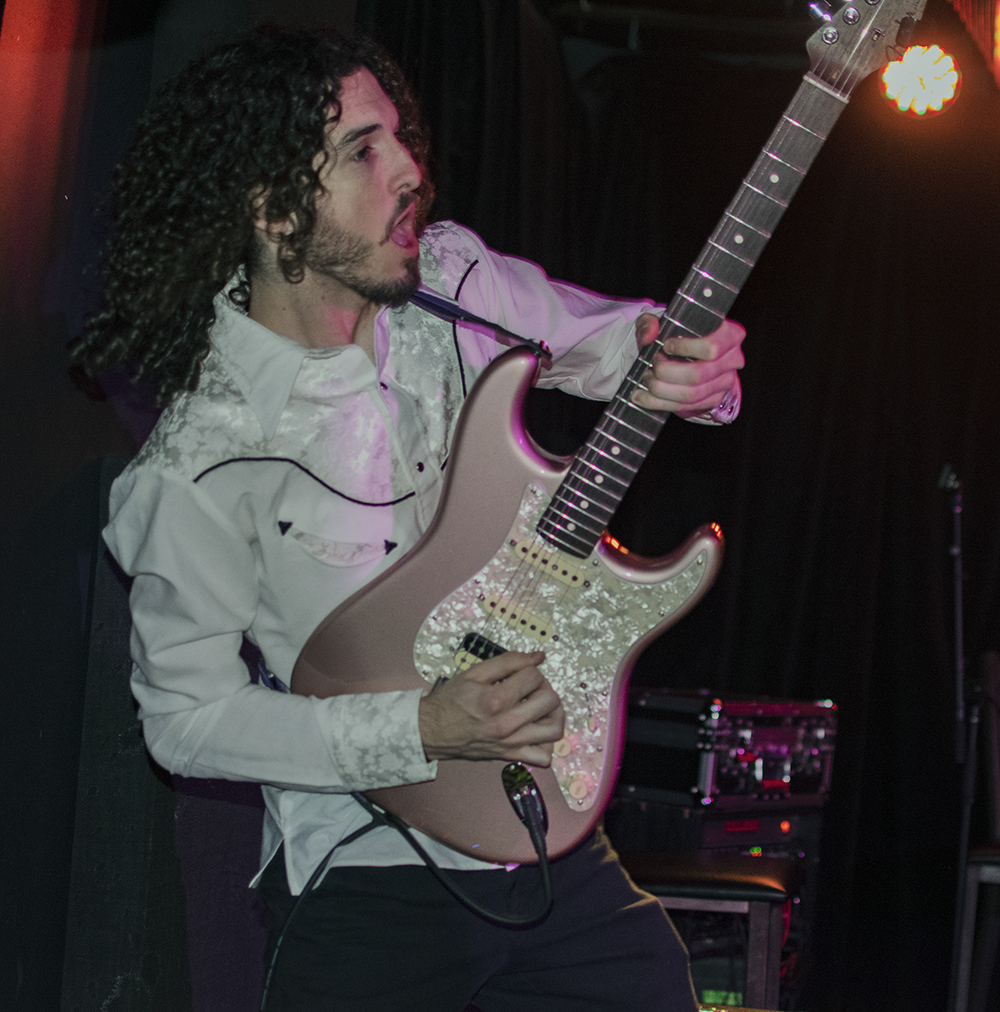 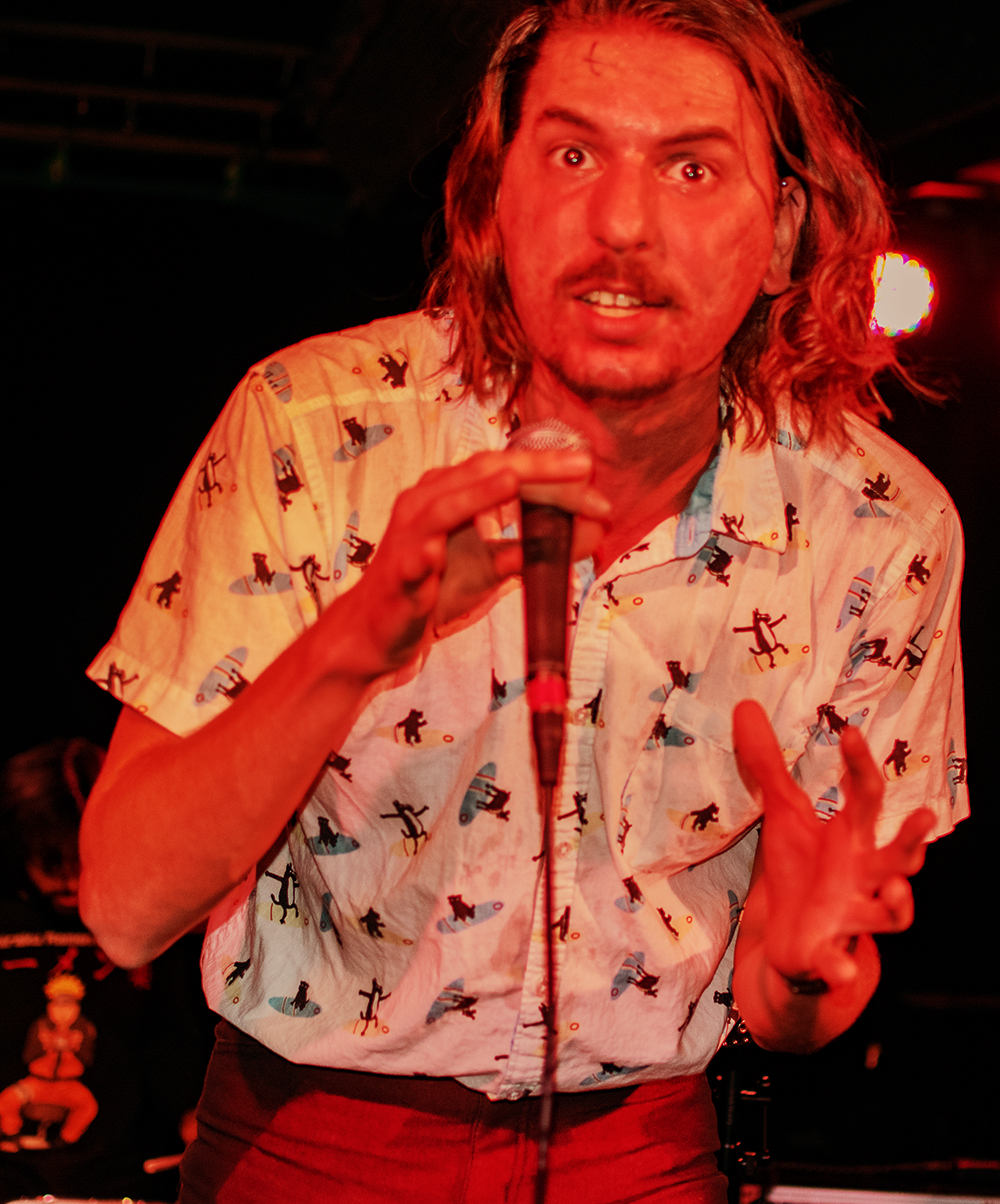 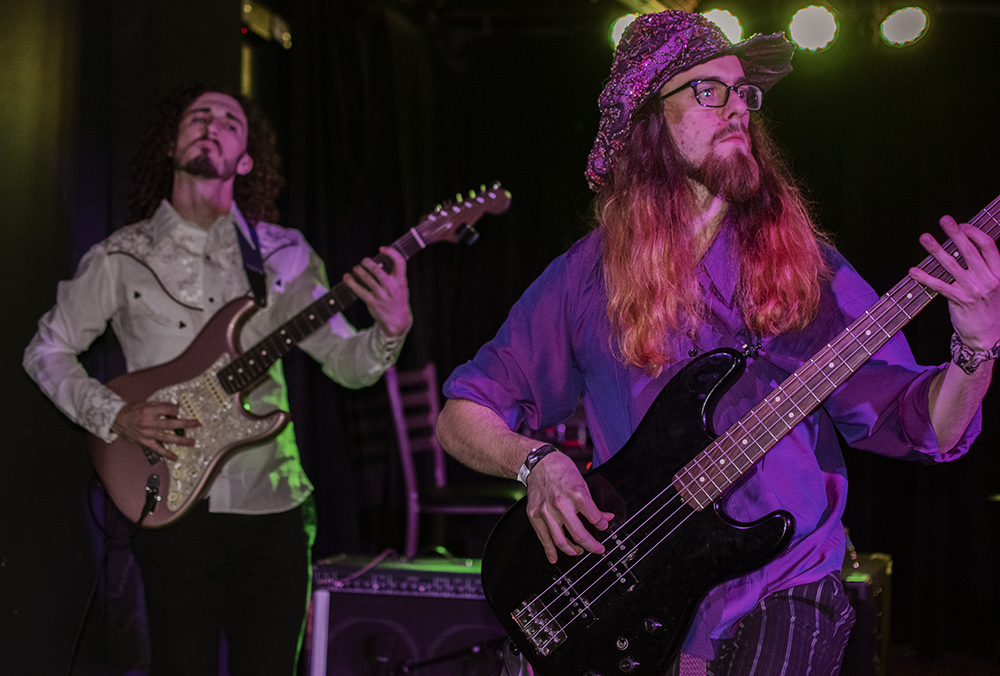 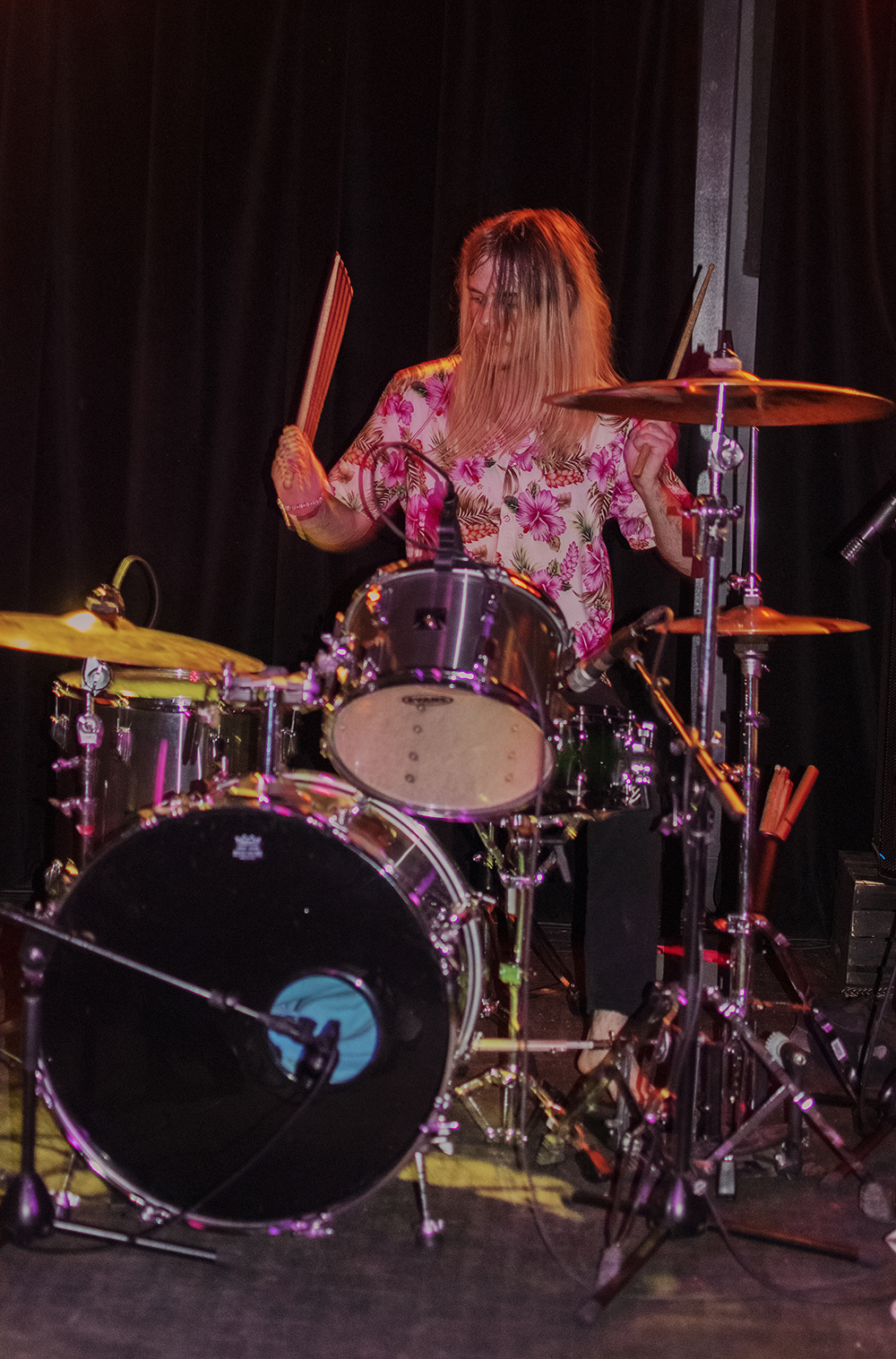