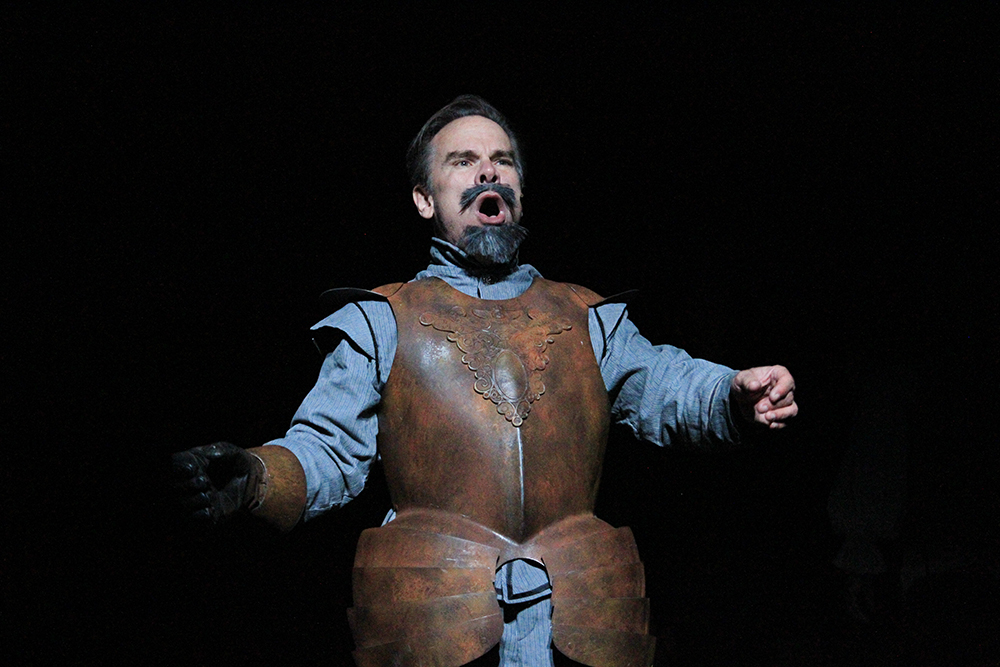 Live theatre is a different kind of beast than most forms of performance art.

Typically when we give our time and attention to a performer – be it a singer, a musician, a comedian, name your poison – we can fairly judge the quality of the performance by the level of polish and technical skill displayed. A pop star who is consistently off-key isn’t going to earn himself accolades; a comedian who stumbles and stutters over her punchlines isn’t going to inspire dreams of Comedy Central specials.

Live theatre genrally functions according to these same rules… but not always. There’s something about watching a band of performers rally around each other, boldly facing down and practically taunting fate that stirs the soul. When every line is remembered and delivered passionately, when every note is sung perfectly, when all the technical cues flow seamlessly, the achievement in the face of the legions of possibilities for error is so momentous as to be transcendent.

But when things go less than perfectly, there’s a different kind of magic that can happen. Watching performers working together to navigate the missteps that would “ruin” other performances can – sometimes – wind up stirring the soul in wholly different ways.

If there’s a show more uniquely tailored to feature this starkly unique feature of live theatre than Man of La Mancha, I can’t imagine what it might be. The story of Miguel de Cervantes and the play-within-a-play tale of his beleagured Don Quixote — with a book by long-time Valley resident Dale Wasserman, music by Mitch Leigh, and lyrics by Joe Darion — boldly holds up as praiseworthy the imperfect who strive for grace, the shabby who quest for beauty, and the fools who dare to imagine harmony in a discordant world.

Scottsdale Music Theatre Company’s restaging of Man of La Mancha is a vindication of this notion. Directed and choreographed by David Hock, and starring TV icon Peter Scolari as the most errant of knight-errants, this production is anything but polished to perfection. It is uneven, ill-fitting and imperfect – and, so of course, it should come as no surprise that ultimately… it works.

Scolari’s Cervantes-as-Quixote is clearly the focal point of the production, as befits not only the text on the page but his own impressive legacy as an actor. However, more than the silly costume or the twisted corkscrew blade with which he threatens scoundrels (or tries to), the defect and the delusion of his Quixote is made manifest in more than a couple musical numbers where his voice falls shy of the demands of the music. 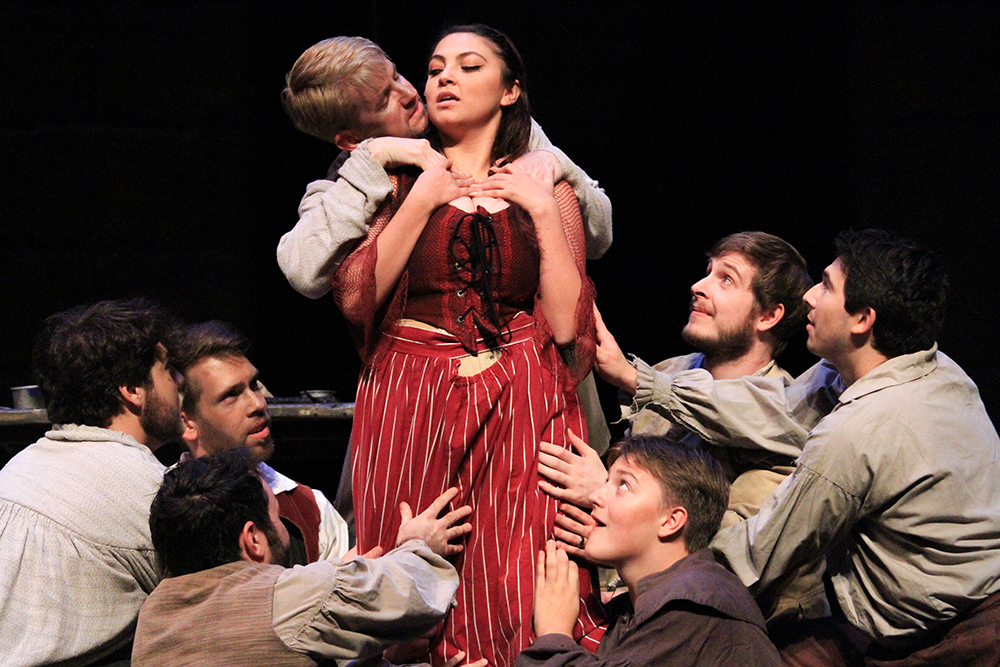 He’s clearly a talented vocalist and a skilled performer, but lacks the range and power the music assumes. For all that, however, his portrayal never rings false, and in fact, the minor missteps along the way serve to illustrate that this Quixote isn’t helpless in the face of his delusions, but instead has the great courage of spirit needed to choose them. His utter faith, as both Cervantes and Quixote, in the madness of hope profoundly resonates from the first moments, and provide this show it’s North Star.

Because, really, what rings more true? A man singing “The Impossible Dream” who confidently batters every note — in a song about striving for the unobtainable — or a man who sings the same song with earnest missteps and mistakes along the way, but perseveres, not blindly or foolishly, but resolutely and with hopeful defiance?

Of course, as Quixote himself opines within the show, even the bravest of knights is nothing without a lady to love, and Hock’s Man of La Mancha is served on that front by Alexus Poulette’s Aldonza, the tavern wench and sometime prostitute who is forced, quite against her will, into the role of Quixote’s virginal ideal ‘Dulcinea.’

Like Scolari, Poulette’s greatest achievement in her role is in her characterization, more than in her mastery of Leigh’s music or Hock’s choreography, but it remains an impressive achievement regardless. Poulette’s Dulcinea doesn’t come off as resistant to Quixote’s rose-colored perceptions of her because she can’t understand them, or due to shame that she feels she can’t live up to them, but because she isn’t Dulcinea; she’s Aldonza and to her, this maddened knight is essentially no different than the drunken louts she’s forced to contend with daily – just another man dictating to her who and what she’s supposed to be in service of making him happy.

The errant notes that Poulette occasionally hits don’t undercut her performance, they underscore this aspect of her character; a woman thrust into the ill-fitting clothes of someone else’s expectations. However, by the end of the show, when Aldonza is given some powerful reprises to close the narrative, Poulette’s voice becomes nothing short of resplendent. That these too-brief moments so satisfyingly close not only her arc, but the story of Don Quixote as presented to the audience, is a large part of why this show is so effective. 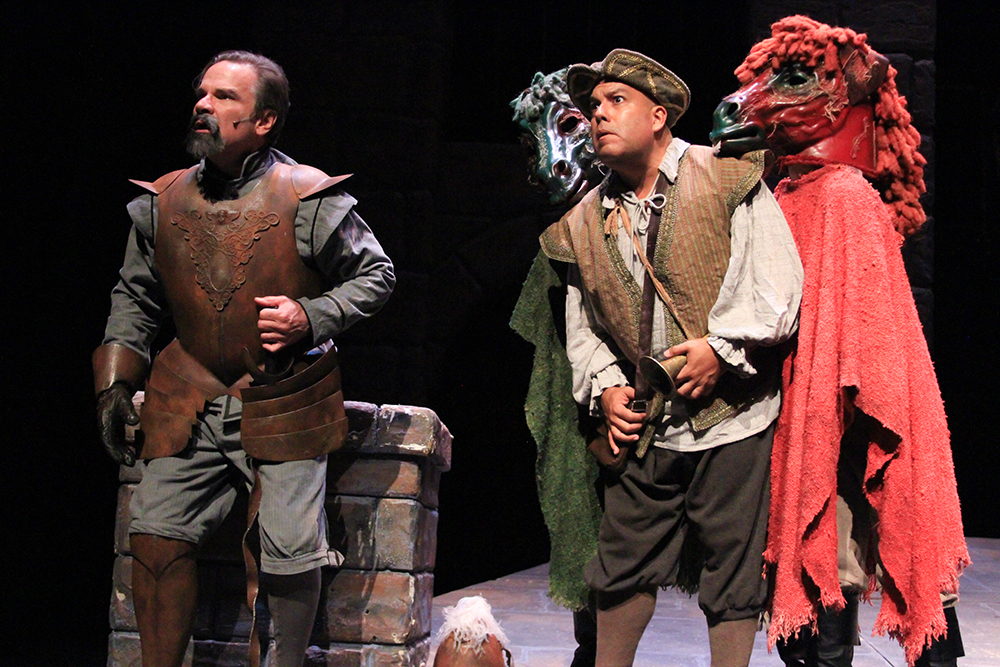 Mention should also be made of also Hector Cortis, as Cervantes’ manservant and Quixote’s faithful sidekick Sancho, and Jason Chacon, who also plays a double role as the ‘Governor’ of the writer’s dungeon, and the long-suffering innkeeper of the delusional knight’s tale.

Cortis delivers a pitch-perfect character performance, which thematically serves, because it feels like Sancho is the only one who, through the entire show, it seems, is having a great time. He almost seems a transplant from a different staging of this show that was given more rehearsal time. He hits every note, lands every step, and brings vitality to every scene he’s in.

Chacon is given entirely different tasks within the show, and performs them impressively. He is the most direct audience surrogate, as he learns with us just what value there is in a man of La Mancha. His Governor stalks and looms across the stage with an intimidating pro-wrestler stature, and Chacon seems comfortable using his towering frame to good effect, menacing our heroes from the first moments. However, from those first imposing interactions, to the ultimate close of the show where he has developed a very different relationship with Miguel de Cervantes, Chacon consistently earns every moment.

While each of the principal performers turned in powerful, if uneven, work, it’s possible that the largest contributor to this performance is the stage itself. I’m not the best for this kind of mental calculation, but I would estimate that all the action in this show takes place on a 30-35 degree incline. The stage tilts so severely that it almost feels like a prize chute on a carnival game, intended to deposit actors directly into the first row. Simply maintaining a vertical base must place a strain on the actors, let alone attempting to sing or dance while traversing an inclined plane.

It would be hard to recommend most shows that stumble as often as Man of La Mancha does. Battles were waged, and sometimes lost, against makeup, microphones, props, singing and staging. But for this show, those flaws only throw into relief authentic, moving performances and powerful themes. In the days since the performance, I’ve found myself beginning to wonder if Hock hadn’t meticulously planned every technical flub and sour note like a demented visionary, because he forces the audience to learn the same lessons of the beauty of flawed grace as the characters.

And if the more prosaic, and likely explanation is true – that Man of La Mancha could have used a couple more tech rehearsals – an evening of experiencing a band of intrepid, hard-working, determined actors create something greater than the sum of its parts is a good evening, and an example of what makes live theatre so uniquely powerful.

Man of La Mancha, presented by the Scottsdale Musical Theatre Company, ran at the Tempe Center for the Arts through October 6th. For more info on upcoming SMTC shows including A Christmas Carol starring Charles Shaughnessy as Ebeneezer Scrooge and Sweeney Todd starring Adrienne Barbeau as Mrs. Lovett and Jeff McCarthy as Sweeney Todd, head to their website.