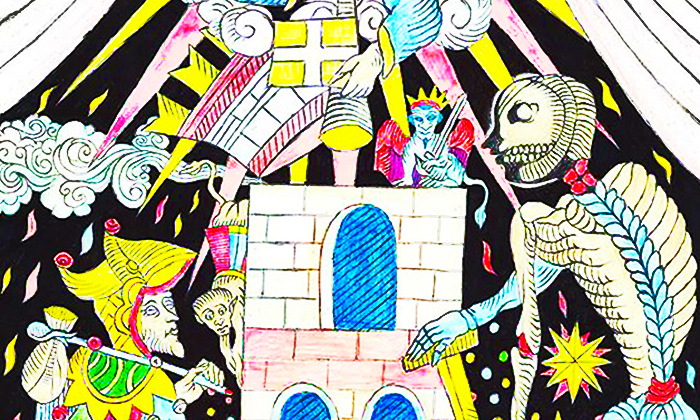 The Canterbury Tarot is a new play by local playwright Ashley Naftule, whose other works include Ear and The First Annual Bookburners Convention. It is a mashup of Chaucer’s classic novel “The Canterbury Tales” and characters from Alejandro Jodorowsky’s tarot deck. Our players converge in an inn that sits in the shadow of Canterbury Cathedral, sharing stories as they make their pilgrimage. Motivations unfolding as interactions do.

Aside Theatre Company bills itself as “minimalistic,” an apt way to describe the space and production. No frills. No fluff. Just chairs and pews on the floor facing a set comprised of a door, a bar, a table, and a coffin. Costumes and lighting are in the same vein. Simple, yet effective in conveying the basics.

The pace is somewhat challenging, even stilted, at times. Every pilgrim must tell their story, and there were moments at around the midway point where I found myself enumerating those who had not yet done so, apprehensive about how much was still to come. Thankfully, the latter portions of the play are the strongest, helping to remediate and quell some of the momentum issues. But the work would likely benefit from a slim down, cutting the fat off some of the earliest stories to speed things up and get us to catharsis just a little bit sooner.

I am an unabashed fan of Naftule’s writing style. His shows provide moments of dialogue so prophetic, poetic, and profound that I am often inclined to write quotes down so I can keep and carry them with me. This show is no different. It provides moments of beautiful prose. Nuggets of exceptionally-written dialogue in the midst of casual words and concepts. While this is not one my favorite pieces of Naftule’s work, this show still has tremendous promise and potential.

The performances vary in impact. Alejandro Sanchez Vega is both Death and The World, and his opening monologue sets the trajectory of the show. All bravato, both terribly morbid and disturbingly humorous at times. Dennis Fredrick is intense as The Tower. Slinking around in the shadows, relatively unnoticed, for the majority of the production. Sneaking in near the end to deliver the most heart-wrenching and powerful moment of the entire production. Indy Prince is quirky as The Fool, jumping around in vivid color, making clever commentary in the midst of omnipresent solemnity. The cast is clearly delighted by their time together on stage, and their enjoyment is felt, almost tangibly, by the audience.

The Canterbury Tarot played at Aside Theatre Company October 4th-20th. Holy Inappropriate and The Covenant of Pleasure is next up, opening on November 1st. Tickets are $15-20 and can be purchased online here.