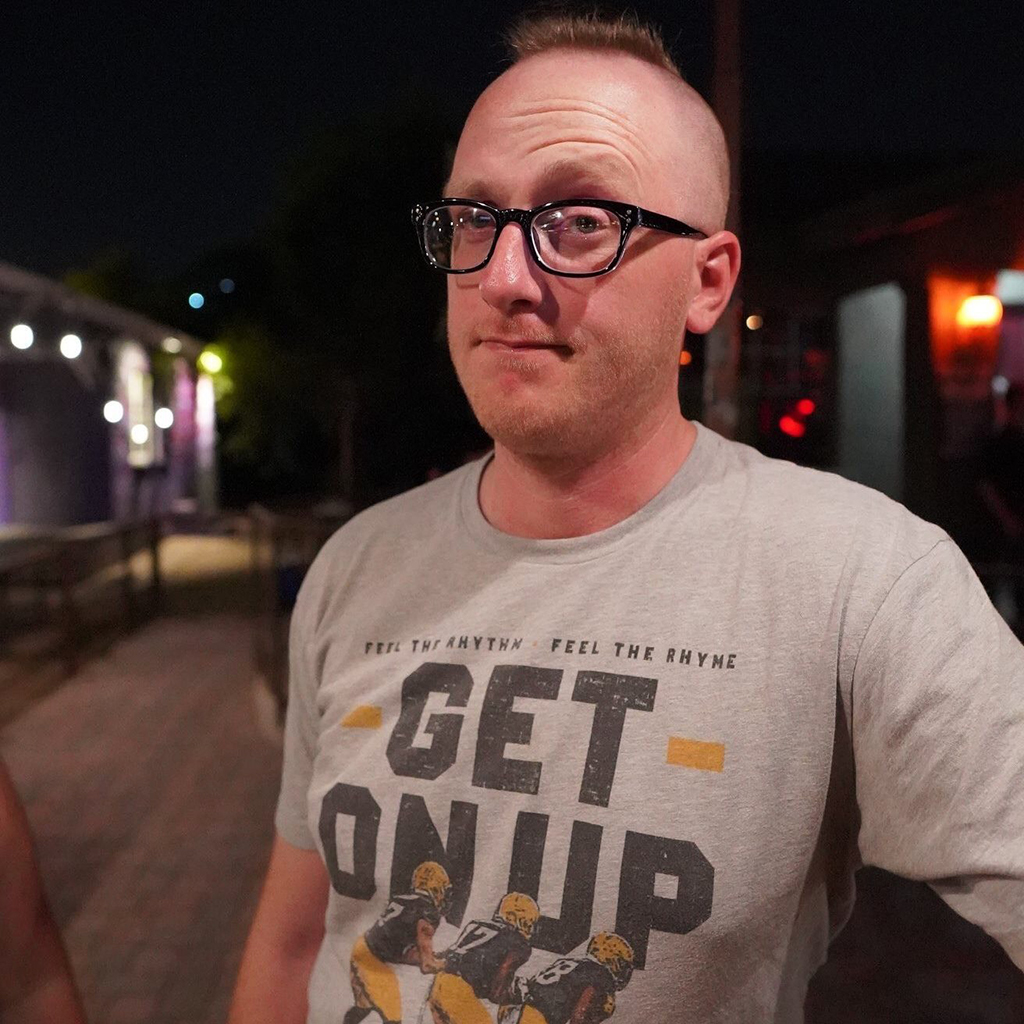 Social Savvy is the column where we interview creatives in our community to talk about the impact and challenges of navigating through this crazy world of social media, as well as how social media has affected promoting their craft.

Everything Phoenix comedian Matt Micheletti touches turns to a Chipotle restaurant — at least that’s what he jokes to the crowd in nearly all his acts.

He is not necessarily wrong either because nearly every venue that he produced shows at on Roosevelt Row has been closed to the ongoing [and controversial] gentrification in the area. The former U.S. Air Force weather forecaster got his start doing comedy in 2010 after seeing a First Friday Night Live show at the now-defunct Firehouse Gallery, and joined the cast the next season which kick-started his comedy career. Since then, Micheletti has been a fixture in the Valley’s DIY comedy scene for for the past seven years, famous for running Comedy on Fire, which provided an alternative outlet to the traditional comedy clubs and breathed life back into the underground comedy scene.

His frank sense of humor and his undeniable work ethic makes him a favorite amongst patrons of Phoenix’s underground comedy scene as well as busting out hit shows like First Friday Comedy Hour at Lawn Gnome and The Mystery Show after Paul Horner’s death with fellow comedian Erick Biez at The Lost Leaf. Besides the underground comedy scene, you can find Micheletti performing at a plethora of open mics around the Valley. He will also occasionally appear on guest spots at the House of Comedy.

His prolificacy in Phoenix’s comedy scene has also garnered him spots at notable festivals, such as Bird City Comedy Festival, Big Pine Comedy Festival and Four Corners Comedy Festival. With all his DIY experiences in tow, Micheletti is starting to become one of the premier comics in the Phoenix area with his wildly successful show at Crescent Ballroom, HOT MIC!, an lottery-style open mic format — the next installment slated for September 17th — that produces tons of surprises for both the comedians and the audience.

In between fixing up his new house and working on material for future shows, Micheletti took time out of his busy schedule to email me his answers to my burning questions about his experiences with social media promotion, a funny 311 troll story, and why the proper use of social media is an integral part to galvanizing the Phoenix community.

Allyson Bills: What was it like promoting on social media platforms when you first started comedy? Which platforms did you use?

Matt Micheletti: Oh man, this is a good question. When I first started promoting online, I used Facebook primarily. I poured a lot of senseless time and effort into creating promo images and posts no one ever saw. I also used Instagram. Moreso now. It’s taken me awhile to see the benefit [using Instagram] of doing so.

What mistakes have you made promoting on social media platforms? What did you learn from these mistakes?

I think, as a general rule, promoters need to create content that reaches multiple targets. Social media is so diverse; it becomes easy to put the blinders on and promote with a huge target audience. Find what works for you and grow on it. I kept repeating my own mistakes early on.

How have you applied all your experiences with social media promotions into your past shows and current show, HOT MIC!?

I’ve learned to cut the bullshit. Haha. Social media promotion, in and of itself, is a mystery and a horrible nightmare. It really comes down to timing.

What are your favorite social media platforms to promote your comedy and why?

Again, I primarily use Facebook. It’s the platform that I have the most reach so the time spent doing it there returns a greater reward.

What are your least favorite social media platforms to promote your comedy and why?

Which social media platform do you think needs to improve in order to become more promotion-friendly?

I would say that Facebook honestly needs a revamp. I’ve paid for ads [before] on Facebook, but they never hit my target audience so I stopped. It’s stupid and a waste of money.

Do you use social media platforms to test out new material, and do you find an effective tool in promoting your comedy?

I use social media to primarily dump my throwaway jokes. The real jokes I write go to open mics instead.

What has been your most rewarding experiences as a result of promoting social media?

Bringing community together. I’ve been promoting and running shows in Downtown Phoenix primarily underground for 7 years. I know my audience and that’s come mostly from socializing online. The 21st century is weird.

Do you have any funny social media troll stories?

I used to be very active on a message board for the band 311. I had a guy who would take my stand-up tapes and share them online in different band message boards. For bands that I didn’t even listen to! It was so weird. He probably still lives with his mom.

Occasionally, there’s a local [comedian] or two that pipes up, but for the most part, it’s always comics who gave up and stopped doing comedy. Or those [comedians] who only find success in their home rooms.

What advice would you give to other comedians for promoting on social media?

If you can get the public behind it, anything is possible.