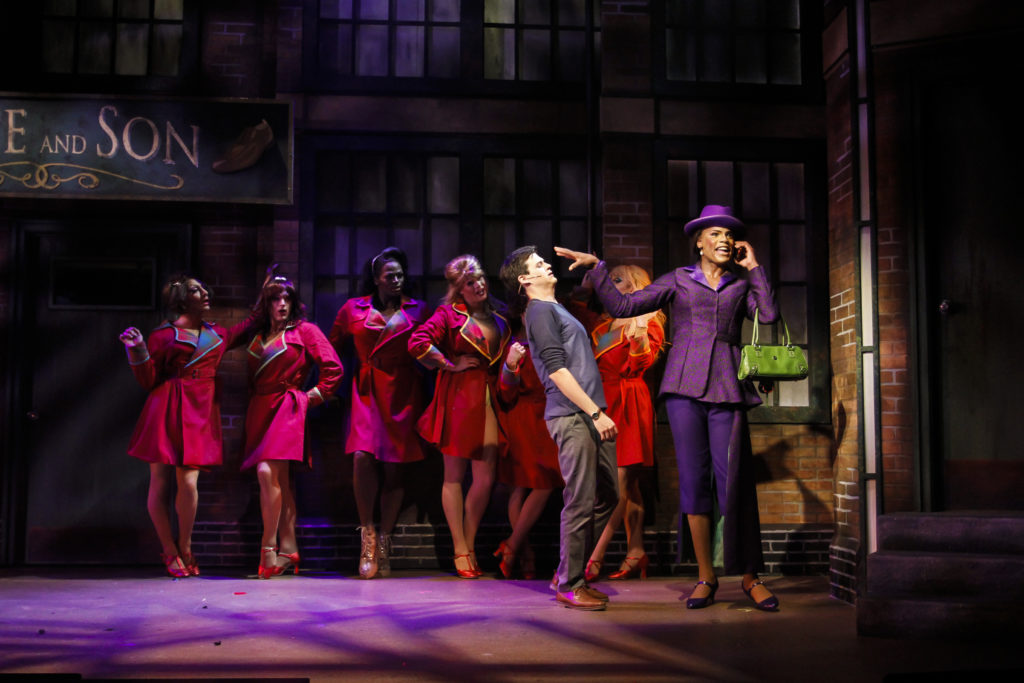 Kinky Boots is based on an independent British film, which was inspired by the true story of Steve Pateman who found a niche market in an attempt to save his family’s failing shoe business. Although it had a somewhat rocky start, Kinky Boots defied the odds, ultimately winning 6 Tony Awards in 2013, including Best Score (for pop icon Cyndi Lauper, the first female to win an individual Tony in the category) and the top spot, Best Musical. The show closed in April of this year, after more than 2,500 performances on Broadway.

The show follows Charlie (Andrew Poston), a young man raised in and around his family’s shoe factory, anxious to get out and establish his own independent life in London. When unfortunate circumstances force him back home and to the helm, he discovers that the business is near bankruptcy. Then a chance encounter introduces him to Lola (Darius Harper) and her world of drag queens, and Charlie changes the type of men’s shoes the factory produces in an attempt to save the business and the jobs of his closest friends.

The Phoenix Theatre Company’s interpretation of Kinky Boots is joyous and uplifting, with a pep and vibrancy owed to a show with so much inherent fun baked in. The set is large and purposeful, and the lighting is stunning, especially during the somber “Not My Father’s Son.” The costumes are glorious, especially Lola’s and and her Angel’s. Flashy, with just enough glitter. And the boots are tall and high, and pure perfection.

Although Kinky Boots is about Charlie’s journey, Lola is the star. She is the catalyst for all that transpires. The savior. The creative force. The looking glass through which everyone peers in order to truly see themselves and others. As so eloquently stated by Lauren, Lola is a presence so powerful that she brings life to a room by simply stepping into it, and leaves a huge gaping hole behind every time she leaves. So the role has tremendously huge boots to fill. And Darius Harper absolutely slays. With a complex humbleness and a flamboyant eccentricity, and a voice and charisma to match.

From a personal aesthetic, on paper, Charlie’s songs are some of my least favorite in the show. With challenging notes and limited places for showcasing vocal chops, they almost serve to work against a solid performance. But Andrew Poston’s depiction is utterly delightful, injecting a youthfulness and innocence that frames Charlie in a new, and quite refreshing, light.

Kaitlyn Russell is charming and plucky as Lauren, who always says what needs to be said to set the trajectory of the story. And, as is absolutely necessary for the success of the show, the Angel’s are all evocative, gorgeous, and impressively nimble in their stilettos.

Kinky Boots kicks off The Phoenix Theatre Company’s 100th season. It plays at the Mainstage Theatre downtown through October 13. Tickets are reasonable and can be purchased online.

I highly recommend going early to enjoy a meal and drinks at the ArtBar + Bistro before the show. The food and drinks are delicious (I highly recommend the fish & chips), parking is a breeze because of early arrival, and reservations can be made ahead of time so no other planning is necessary. You can just relax and enjoy your company until the lights flicker to indicate that it’s time to take your seats.

If you are interested in how Kinky Boots the musical was developed, from all involved in bringing it to life, check out Episode 13 of Broadway Backstory. Broadway Backstory is podcast that took deep dives into the development stories of some of Broadway’s most unique and special shows, and the Kinky Boots episode (the most recent episode, posted in December 2017) is a series highlight and personal favorite. Enjoy!