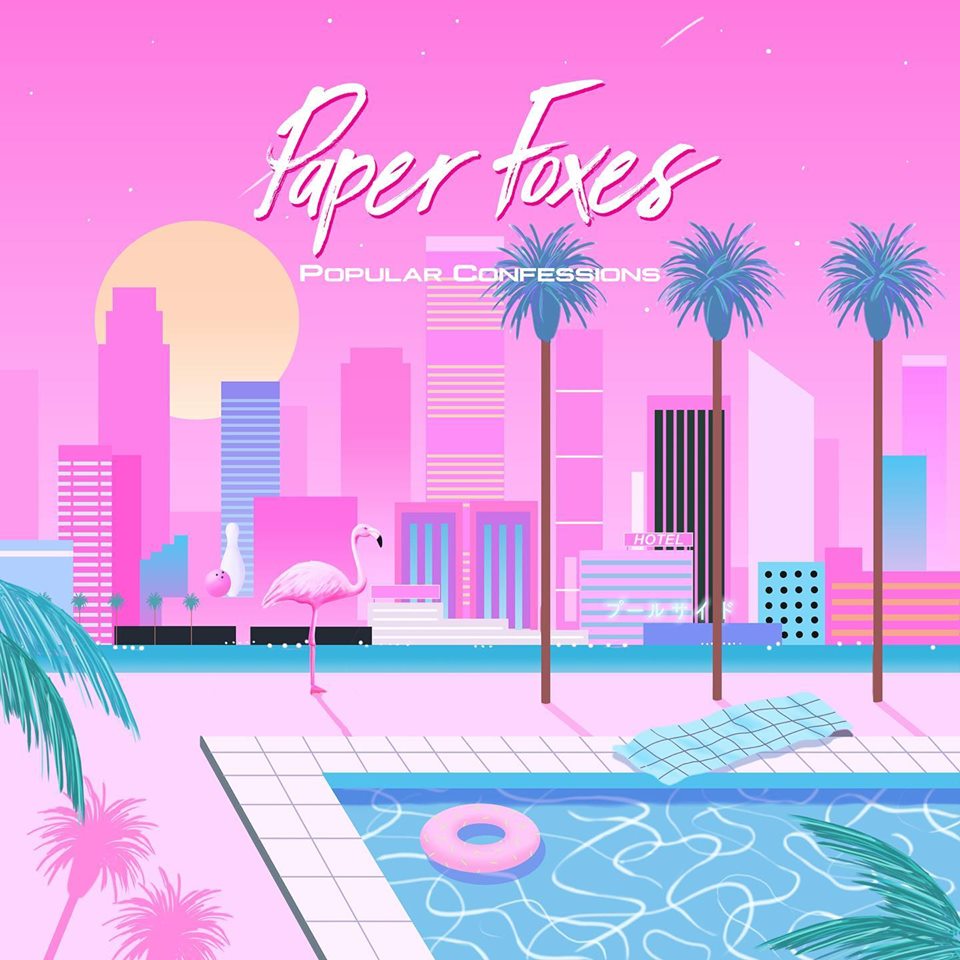 Paper Foxes have been sharing their synth-fueled sounds with fans for years and they just unveiled their debut LP: Popular Confessions. The new album contains a few revisited classics from the band’s repertoire sprinkled amongst some brand new tracks. But Paper Foxes went into the studio to create a fresh and uniform sound for Popular Confessions which “officially” drops on October 5th at The Rebel Lounge.

I had a chance to catch up with CJ Jacobson from Paper Foxes about the new album, songwriting, and what’s next for this synth-pop revival act. Check out the new music video for “Dance of the Dead” and then read our Q&A below!

YabYum: First of all, who is in Paper Foxes and what does everyone play?

How long have you been playing together? And how did you come to making music together?

The five of us have been playing together for almost two years now. There have been a few different lineups of this band since our inception as a 3-piece four years ago. Oliver is the newest member. He joined about 2 years ago. Uche, Jahlani and Patro have been members since about 6 months before we released the Strawberry Lashes EP. We meet through the PHX music scene and from friends (Fairy Bones).

It’s been three years since the Paper Foxes released Strawberry Lashes. What have you been up to since then? Refining the sound? Writing new material? Playing out? Fill us in on The Paper Foxes then and now.

Since we released that EP, we’ve been busy refining our sound (we added a second guitar), working on new material, and doing some regional touring in the southwest and Cali. We hit flagstaff and Tucson every few months and Cali about twice a year. We’ve released one EP, Devil On My Shoulder, and we’ve been focused on our debut LP!

Where did you record Popular Confessions?

Popular Confessions was recorded and produced by Bob Hoag at Flying Blanket in Mesa, AZ.

I noticed you re-recorded “Strawberry Lashes” – the title track from your first EP. What prompted the revisit?

CJ: The decision to re-record “Strawberry Lashes“ happened as soon as we started working with Bob Hoag. I felt like we never unlocked its full potential and wanted a professional producer’s input. I’ve been dying to work at Flying Blanket ever since I heard Small Steps, Heavy Hooves. When we finally got the time booked with Bob we made the decision to revisit some of our favorites including “Devil On My Shoulder”, “Pop Confessions” and “Breathing Underwater” (along with “Strawberry”). I guess you could call the LP a mix of our “greatest hits” plus some new material.

Vocal duties are shared on this album. Just curious if folx write their own songs or if the band works together to write songs? Maybe you can share a little of the Paper Foxes’ process?

Yep, vocals are shared! We have a few writers in the band. It kind of goes song to song, we haven’t quite figured out a tried and true method for writing that we go to every time. I wrote “Pop Confessions”, “Dance of the Dead”, and “Strawberry Lashes”. Uche and I Co-wrote “Get Off the Wall”, Ollie and I co-wrote “Last Open Platform”. Uche wrote “Not the Right Time”, he co-wrote “Devil On My Should” with Jahlani, and co-wrote “Breathing Underwater” with the band, lol. We’re definitely still figuring it out.

Paper Foxes embodies that Retro-Future feel. What would you bring back into style, musically or otherwise, from previous eras?

This is a great question that’s hard to answer. I say that because I know I’m going to wake up in the middle of the night with a better answer. I would bring back more theatrical influence to life shows, a great example being Talking Heads with costumes and themes and everything. We love angular guitars, disco bass and glassy synth and we fully intend to inject plenty of each into our writing in the future.

There are some pretty cynical lyrics set to a fun beat you can dance to on this album. Is that the band’s general philosophy? Dance away the modern day depression?

Dance away the modern depression is definitely a theme that rings well with this album, as well as most of our music in general. The song “Pop Confessions” is a message that it’s okay to fall in love even if it feels like the world is ending (isn’t it tho?). I picked the name, Popular Confessions, as a full form of that with the idea: isn’t society generally depressed and cynical? That’s okay, we get it, it’s 2019 and everything’s fucked, BUT that doesn’t mean you can’t fall in love or dance your ass off. In fact if you do those things it’s an act of rebellion to all the bullshit around us. Don’t let politics and the world burning keep you from smoking a blunt and trying to moon walk at Emo night!

It sure seems like Paper Foxes has played just about every place in the state and plenty of out-of-state spots. Any personal favorites to play and why?

Favorite venues in the state: The Quarry in Bisbee. Why: it’s spooky and weird, Dana’s Mac and cheese is bomb, and we usually get to pet her wolf. Rebel Lounge: intimate room, great sound (we love you Gren), great communication. Crescent Ballroom: it’s a classic, everyone in PHX loves that room. The food is awesome, the staff is really cool, easiest parking/load in Downtown, amazing sound, it just feels like home.

Coming up next will be a lot of playing out as well as some regional touring. We’re hoping to get some licensing from this album, but honestly the main thing is new music. We finished recording this last December, some of these songs are years older than that and we’ve been DYING to work on something new!

Make sure you head to the release show for Popular Confessions October 5th at The Rebel Lounge and don’t forget to check out the new album!!