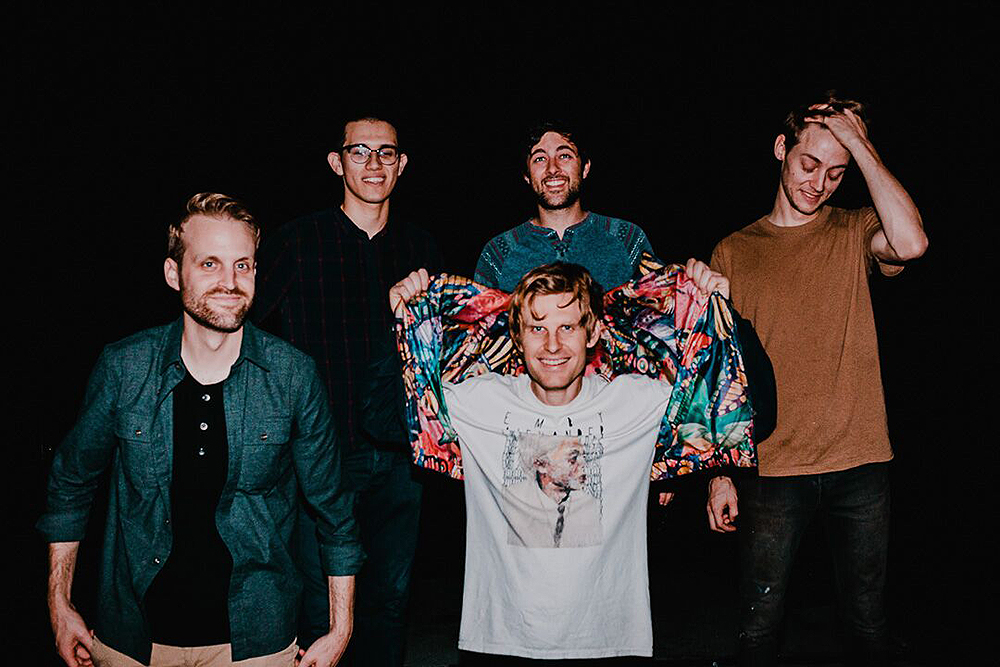 Cactus Candy, the brand new release from Phoenix weird desert pop creatures, Emby Alexander, has been wrapped up and delivered into the collective hive-mind.

With a release show at Valley Bar on August 10, the band is about to come back home from their 20-city US/CAN tour. Along with 14 other US cities, The Great White North got a taste of Cactus Candy and I’m sure it was sweet.

The new album opens with “Arabesque (Wet Rusting God)”, and right away you should be able tell what sort of journey you’ll be taking as you listen to this album. It’s a little inviting and a little strange, all over a lush soundscape.

“Museum of Modern Hearts” arrives next and contains my favorite line on the album, “backgammon baby’s got you cornered in/ the candy’s got you gagging cuz it’s tamarind.” I almost feel that that’s a better definition of cactus candy — something that bites you back.

Being the most straight-forward song on the record, “Pursuit”, could be considered a single off of Cactus Candy. However, with a handful of f-bombs and at a length of nearly 6 minutes, it’s still not what most would consider the run-of-the-mill or radio-friendly. And, with Emby Alexander, that seems pretty par for the course.

The rest of the album is a mix a bedroom and baroque with some psychedelic folk and alternative post-punk mixed in. After listening a few times I had some questions for Mr. Emby Alexander himself (Michael B. Alexander) about not only the new album and tour, but about the band’s musical process and artistic drive. Check out the answers to these questions and others below. And don’t forget to check out Cactus Candy…

Mark Anderson: I love Cactus Candy as an album title. Especially for a band from Phoenix. I’m sure there are some symbolic references that could be made like the new album contains sweet, pop gems much like the 8oz box of confectionary, but I’m curious if there is any meaning behind the title or is it simply what you felt to be a great album name?

Emby Alexander: The Cactus Candy title is a kind of juxtaposition of words like Sex and Pistols, Velvet and Underground, Buzz and Cocks. Something rough and something tender. Like us maybe. We’re also fans of the desert and its perceived harsh bleakness while in reality teeming with growth and life and creatures lurking in the shade of the creosote. I grew up in the desert eating the fruit from the saguaros right off the ground when they drop ripe or made in to jam. We always called it cactus candy.

It seems as though the personnel on this album is close to a few of your previous releases along with addition of Austin on vocals/keys. Could you tell us about the latest incarnation of Emby Alexander? Looks like you have few guest vocalists on this album as well much like past work…

The core personnel hasn’t changed much. During the last few albums Austin had moved to Seattle. His absence lessened his role a bit, but Austin still contributed to all of the albums via email, satellite, or recording sessions in Seattle while we were on tour… but now he’s back in Phoenix and we’ve picked up where we left off.

And as per usual the “Man Behind The Curtains” is Brandon T. Hickey of Hypnagogic Records. He is our Wizard of Oz. He takes our clumsy, ambitious ideas and makes them focused and strong.

Yes, there are a few guests on the record. I had dreamed of collaborating with artist Devin Fleenor and had crossed paths with him a few times in Phoenix but had never made it happen. And then when he passed I had made a conscious decision to never delay reaching out to people I wanted to work with again because the chance may never come. So, Devin inspired me to reach out to Joel Marquard from Spiritual Warfare and The Greasy Shadows/Gospel Claws. Joel contributed some beautiful sounds to “Arabesque (Wet Rusting God)”. There are also weird sounds from fashion designer K.S. Garner, painter Eric Kasper, and Dane Jarvie of Chicago psych-rock band Dendrons on the album. I’m very fortunate to be surrounded by these friends.

DC Berman of Silver Jews/Purple Mountains came out to our last show in Olympia, WA and had written a bunch of notes and pointers to convey to us after the show. We graciously listened to every criticism. I emailed back and forth with him before his passing. He had given his blessing on a couple of our songs I ran by him but our collaboration never came to fruition. If you’re reading this, DON’T EVER WAIT.

Speaking of vocals, although I know you to be a multi-instrumentalist who has played a variety of instruments on multiple Emby Alexander albums, the past two albums list you as vocals only. Have you transitioned to just providing vocals on songs now?

The credit is usually listed as “Emby Alexander – voice”. I contribute more than just vocals but I think it looks ugly and conceited to list a bunch of instruments on the album sleeve. Sometimes I don’t remember how the weird noises were made, so VOICE seems like a catch-all for everything. I don’t want to write out “instruments: broken ceramic measuring cup, cement slap, couch springs, blade of grass, heart murmur, blah blah blah, who cares?”.

Like all your albums, there definitely is some interesting lyrics and themes on Cactus Candy. Of all the sources of inspiration out there, do you find there are certain elements that inspire you more than others in your songwriting? And, if so, what would those be?

I don’t usually analyze the album until after its out or read the reviews so somebody can tell ME what the hell I was on about. Looking back now I think this album’s themes center around free-speech and self-expression, suicide, substance abuse, and self-preservation, occultism and indoctrination, sexuality and gender, GOD and gods. I love reading. I love films and I love observing humans. The songs are usually for outcast humans. 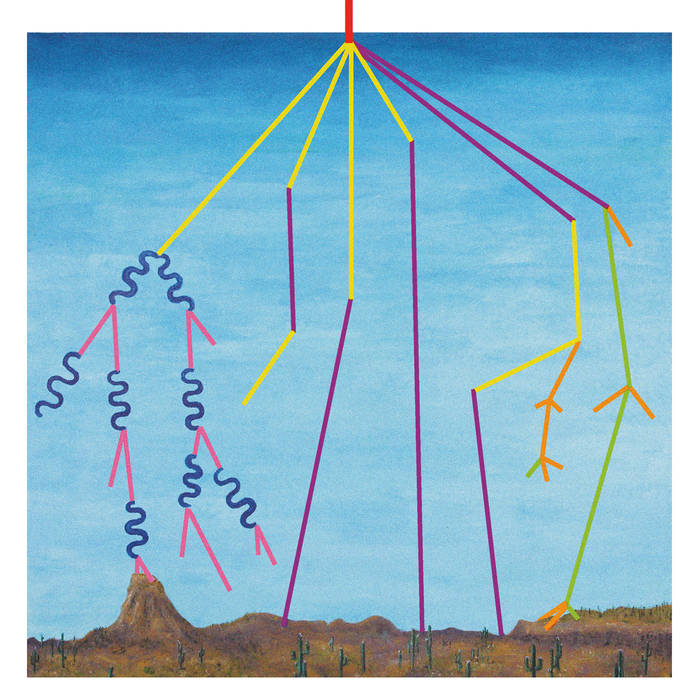 It’s great how you wrote the chords of the music in the lyrics section of each song on your Bandcamp page and I feel like I haven’t seen anything like this since Twin Ponies released Pores in 2013 along with an accompanying songbook. This is such a great idea and I’m curious if there is any impetus behind doing this besides people being able to figure out the music obviously…

I grew up learning lots of songs from TABS on the internet and they were often wrong. I put them out there so somebody who wanted to play along with the songs would have the most direct source to the accurate chords. Or somebody can see how our songs are constructed so they can maybe build their own songs inspired by our songs. I appreciate you noticing because it felt egotistical including the chords but I’ve seen a few people cover songs on their social media so I think there is an appreciative audience for it. I intend to include the chords on every release.

How is the tour going?? Any standout shows or experiences yet that you’d care to mention? And how did the release show at Valley Bar go?

Tour is great so far. Today is our first day off. As we speak, we’re somewhere between Missoula, Montana and Calgary, Alberta. Our show at Donut Daze in Boise was great. Spiritual Warfare was on that bill so we got to hang with Joel and the Greasy Shadows a bit. The house show at Hockey House in Missoula was great, too. Lots of dancing and strange, beautiful people. We went swimming in the freezing cold Lochsa River yesterday. We met an old bull-rider traveling from Alaska, drifting on a similar route as us. He’s getting pretty old and his body is breaking down from his rodeo days. We shared our breakfast with him and he sang us some songs in an empty parking lot. I always have my field-recorder with me and he allowed me to capture his songs. I’ll probably use some of them for the next record.

Valley Bar was a perfect way to release the album. It was one of the hardest years and hardest albums to make. It felt so cathartic to release the album with such devoted supporters. We’ve really been riding that high through tour and are so grateful to Valley Bar for believing in us enough to give us a Saturday night.

On “No Makeup” are you sampling yourselves with “this is me with no makeup on”, or is that from something else? I think it’s awesome, especially when your longer version of the vocal kicks in as well as that intense LFO effect…

The repetitive stomp, clap, and voice is fashion designer K.S. Garner in my living room on the hardwood floor. That’s definitely one of my favorite moments on the album.

I also love Yerfdog’s drum programming on “Bellwether Friends.” Can you tell us how you hooked up with this cat?

Yerf is a friend who produces a lot of hip-hop and rap stuff in Phoenix and LA. I had this song with a pre-set organ beat as the main rhythm but it was kind of thin and I needed help pushing the song to the end. I sent Yerfdog what I had initially created and he came up with something really quickly and subtle and sent it back and it just helped give the song exactly what it needed to feel complete. He sang on the album before this, too.

We at YabYum have been covering you for about 10 years now since your Boys and Frogs days and I love seeing the last decade of your art come to life. I’ve also noticed you’ve fully embraced the name Emby, using it for the last 5 years or so on album credits. Is this a musical persona that’s different than the “real you” or have you ditched your previous name behind?

I used MB Alexander for many years and it morphed in to Emby, I initially signed everything like that because of JD Salinger. I don’t know if there’s a real me.

What’s upcoming for Emby Alexander? Any home-turf shows when you get back? How about any music videos in the works? Does songwriting pause for a bit, or do new experiences on tour or in life prompt you to write new music all the time?

We will come home in September and play a Sofar Sounds gig at the end of the month. We are filming 2 music videos while on tour. Songwriting never ceases. The initial germs for songs often begin on the long meditative drives or when you hear a band that inspires you but the songs will be honed and hopefully come together back at home. We may be doing only singles and B-sides for 2020 but I change my mind all the time so we’ll see.

Catch Emby Alexander on the last night of their tour this Sunday, September 8 at Goodbar in San Diego, CA. For more info on Emby Alexander, check out their website. You can also follow them on Insta, Twitter, or The ‘Book. The band also provided the soundtrack to Trevvor Riley’s film Chameleon which is now available on Amazon Prime.